First thing we have to suppose in order to be able to talk about moral is that we are not determined or more precise that we are not hard-determinist. Because if we would be determined, it would mean we would have no free will and as we do not have free will, we are unable to make our own choices. So a basic condition to talk about morality is that we have a free will. In every day life we encounter many situations, which require us to make a choice.

These situations vary a great lot and with them the choices we have to make.

Sometimes we simply have to choose between two actions, or if to do it in the first place. But every now and then we make some decisions that might not be beneficial for us in the long run. I would like to give you a real life example that will illustrate the situation in which we have to make a choice. Lets imagine that Mike has a girlfriend since 6 years. They are very happy together and enjoy each others company. Both of them have gotten so used to each other and they started hanging out most of the time.

But after six years Mike cheated on her because he got drunk and wanted to have fun. After the great night he woke up sober and was confronted with an ethical dilemma. Now he has two possibilities. Either telling his girlfriend the truth or to lie about it and act as it has never happened.

Mike has to make a decision, but the question arises. What is right? Should he tell the truth and risk hurting himself and his girlfriend for months and maybe years? Or simply avoid the problem and lie. This choice is not as simple as it looks since there are many perspectives to it.

The moral side of lying

Lets first answer the question if lying is moral in this case. The astounding thing is that despite of the gut feeling that tells us that it is wrong, many utilitarian’s would argue that it is morally right for this situation. Lets look at the reasons how so? Utilitarianism deals with the utility of actions. It measures how much pleasure is brought to how many people. It states that, when faced with a choice, we must first consider the likely consequences of potential actions and, from that, choose to do what we believe will generate greatest good for the greatest number.

Applying this to our example gives us 2 outcomes to compare. The first one from utilitarian perspective is lying and leaves you both happy and she is in offended because she doesn’t know the incident (it means that from her point of view it remains inexistent) Besides the loss of clean conscience there is not much pain either. So from this point of view it would actually be morally right. Now we have a justified knowledge claim that tells us that lying in this situation might be right.

But on the other hand looking at this example from deontological perspective, which judges an action by moral rules we get different outcome. They always apply the universal principle, what kind of world would be if everyone did this or that. So from their point right choice would be telling the truth although causing some pain to yourself since you loose the girlfriend and to her since she feels betrayed and misused But there are many other ways of knowing that would tell us that lying is the wrong thing to do, such as authority, intuition.

Almost everyone was brought up being thought by their parents and teachers and I’m pretty confident they were thought never to lie. So these perceptions support the claim that it is wrong to tell a lie. Not only authority suggests that but also divine revelation. For example one of the holy rules is don’t lie. The decision on the end can be either of the choices depending on your priorities. Either you use the utilitarian principles and preserve the god or you follow deontological principles, your intuition and honor the authorities. Now lets look at the second example.

Imagine your friend is hiding in your attic and a murderer is looking for him with the intentions of killing him. He asks you where your friend is. Now this example opens the door to completely different intuitions and gut feelings. In previous example almost everyone not related to the situation would say that lying was morally wrong even though it caused more pleasure than pain. Here the two outcomes are pretty obvious. Either you lie about it and save your friend or you tell the truth because of some reason and the murderer kills him.

For this case even the very people that thought you(Parents , teachers) not to lie would probably tell you that this is an exception. Utilitarianism would again support the claim that it would be right to lie as no one is harmed and your friend is saved. But deontologist would say that even in this example lying is wrong as it could not be universalized. In conclusion we see there are many reasons to lie, either because you just don’t want to admit something, but most of the time it is associated with making things easier and trying to avoid painful or uncomfortable situations and consequence’s. 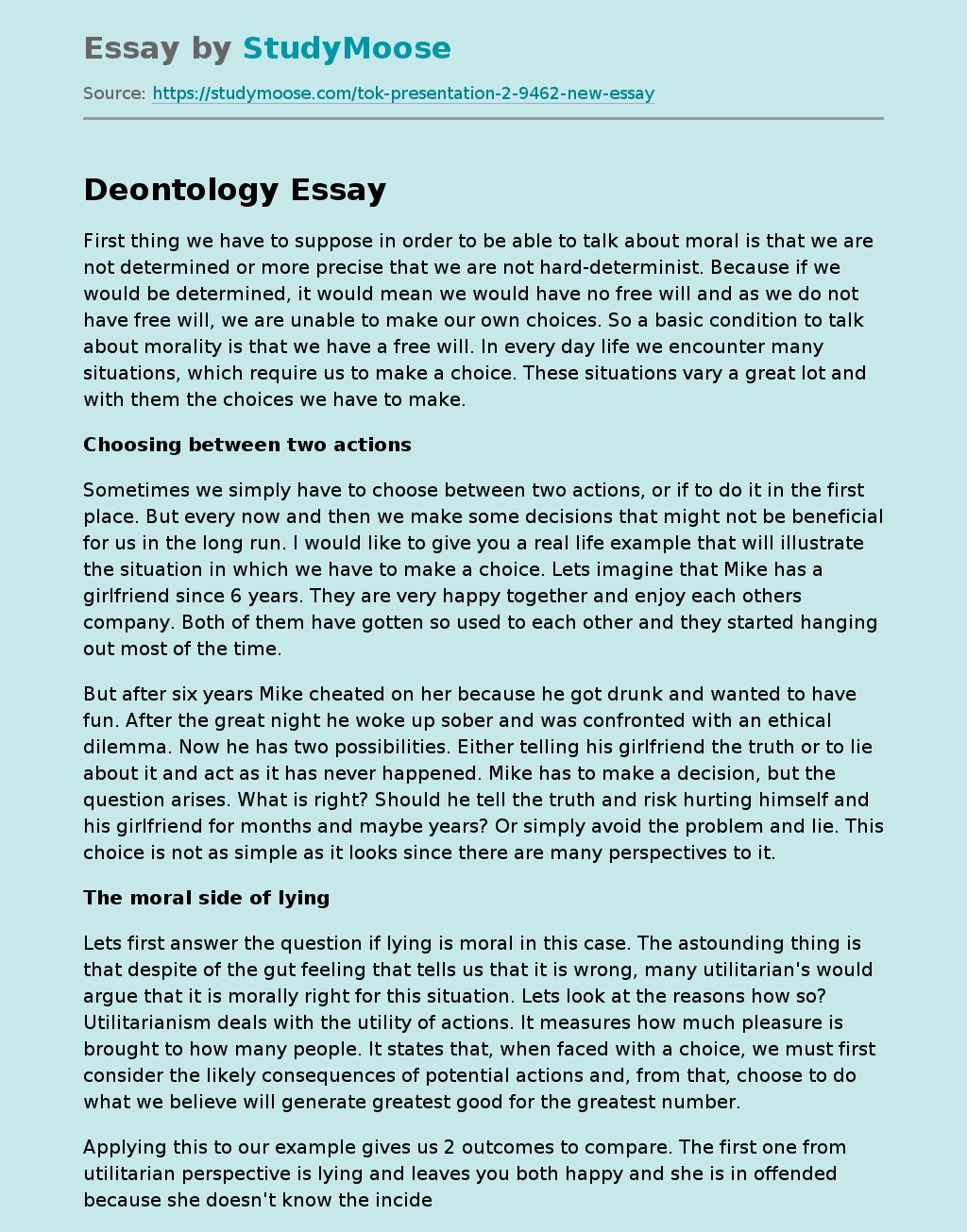