Romance in the Middle Ages

Romance in the Middle Ages

The middle ages are not typically a time remembered for their epic romances. Usually when the middle ages are discussed or thought of it is knights, wars, and religion that come to mind. Love stories in the middle ages were full of passion and sorrow between the two lovers whether it be husband and wife or a scandalous affair. Chevrefoil tells a tale of forbidden love that ends tragically. While The Wife’s Lament speaks of a woman who is desolate and desperate without her husband.

Don't use plagiarized sources. Get your custom essay on
“ Romance in the Middle Ages ”
Get custom paper
NEW! smart matching with writer

The love stories of the middles ages were stories written to pose as true love but were full hopelessness that would ultimately end.

The love story Marie De Frances’s portrays, in Cheverfoil, tells of a boy having a hopeless affair with the Queen. Their love seems to be full of passion and never-ending. Until the day came where they knew their love could be no more and she would have to return to the King and Tristram would have to leave for a better life he is being called for after being banished for his affair.

Where does the hope and desire they have for each other disappear to? “So with us never, belle amie,2 me without you, you without me” (Marie De France). This quote is used to describe the two lovers and how they will never be without each other. The phrase gives so much hope and love for the pair. We as the readers would never even be able to tell the end fate of their love story.

Tristram leaves the supposed great love of his life because he gets called upon somewhere to be by his uncle’s side. He leaves the world in which he has his queen and their great love, and the queen let him leave when the king banished him forbidding their love. This can seem to be that their love was not strong each other to fight for it but, they knew what they had would never last when they looked through the desire and passion. “Together they will surely thrive, but split asunder, they’ll not live” (Marie De France). The two lovers story started so blissful they had found the peace everyone hopes to find in someone to confide in and be comfortable with even though they knew it was wrong. She was a married woman and he was only her lover.

In The Wife’s Lament, a woman seems to be left alone or outcast by her tribe when her husband leaves. The viewpoint of this story can be confusing upon my first read I thought she was comparing her journey alone with Christ’s journey after being betrayed and having to carry the weight of everyone. It was not until my second time looking at the story I see how it can be seen as a woman having being forced into an arranged marriage yet fell in love with him and now has been left alone possibly because of her husband’s wrongdoing to their community or a death. She speaks of sitting alone thinking about her love doing the same and having the strength to leave. She seems to believe if he can do it so can she. Their love is not a story of great passion or fire. Theirs is more of finding hope in the love they were forced into. The wife seems to have fallen for this man but not in a deeply romantic way she seems to have invested her hope into him and who she will become because of him. After her husband leaves she too seems to have been banished for feeling the sorrow of loss “If ever anyone should feel anguish, harsh pain at heart, she4 should out on a happy appearance while enduring endless sorrows- should she possess all the world’s bliss, or be banished far away from her homeland” (The Wife’s Lament 124). The wife seems to be a making a warning for anyone else who might have to suffer her same fate. Her warning is encouraging no matter how much you have do not show it because, in the end, it will only cause more pain maybe she is trying to find the hope in her situation to inspire others to do the same by enjoying what the world has to offer and push through the rough time. She appears to be reaching for some hope during this whole situation, yet her hope has become clouded and lost. Her view and belief of love have become twisted into something where if her hope and value through life is not found within her spouse, she will not make it through the difficult times. “· in her mind at least, they share the suffering of his exile and their separation” (Greenblatt). Her view on love had become clouded by the things she was forced to endure. This is not the true love someone should have. The love should not end in separation that neither of them wanted but had to do because someone else said it had to happen. This view on their love is hopeless constantly waiting on her lover to return to her or finding a tiny piece of hope that maybe he is feeling the same reminiscing on his old times.

The Wife’s Lament and Cheverfoil are love stories on two very different love stories but have a connection in being hopeless despite the best efforts. The characters in the story do fall in love and cherish the passion they have for each other but in different ways. In The Wife’s Lament, she is forced into an arrangement with her spouse and develops a love for him. Unlike Cheverfoil where the queen falls for a man who is not her spouse and finds her great love with him instead. From the start of the stories, both relationships are doomed and chained in a hopeless desolate life. Cheverfoil tries to portray their love as wonderful and if they have each other their lives with be great. They both know it will end but get clouded by the happiness they have for each other. While The Wife’s Lament the woman does not see a love for this man, in the beginning, her love develops through hardships and time and they do not see an end unless by death. Both of their love stories are doomed whether they see it or not. Their stories though they differ in their start both end in a heartbroken love that they knew would end someday.

The middle ages love stories pose as stories that will last forever by their passion but in the end, were just two hopeless lovers whose story always ends apart. The middle ages were not known for their love stories or fairy tale romances. The stories written about love reflect the view of the times with lust and heartbreak by forbidden royal romances and forced marriages. Their stories were doomed from the start anything that is forbidden or forced will ultimately end in hopeless separation.

Romance in the Middle Ages. (2019, Nov 29). Retrieved from https://studymoose.com/oliviaann-woodham-dr-nic-helmseng-20522-september-2019romance-in-example-essay 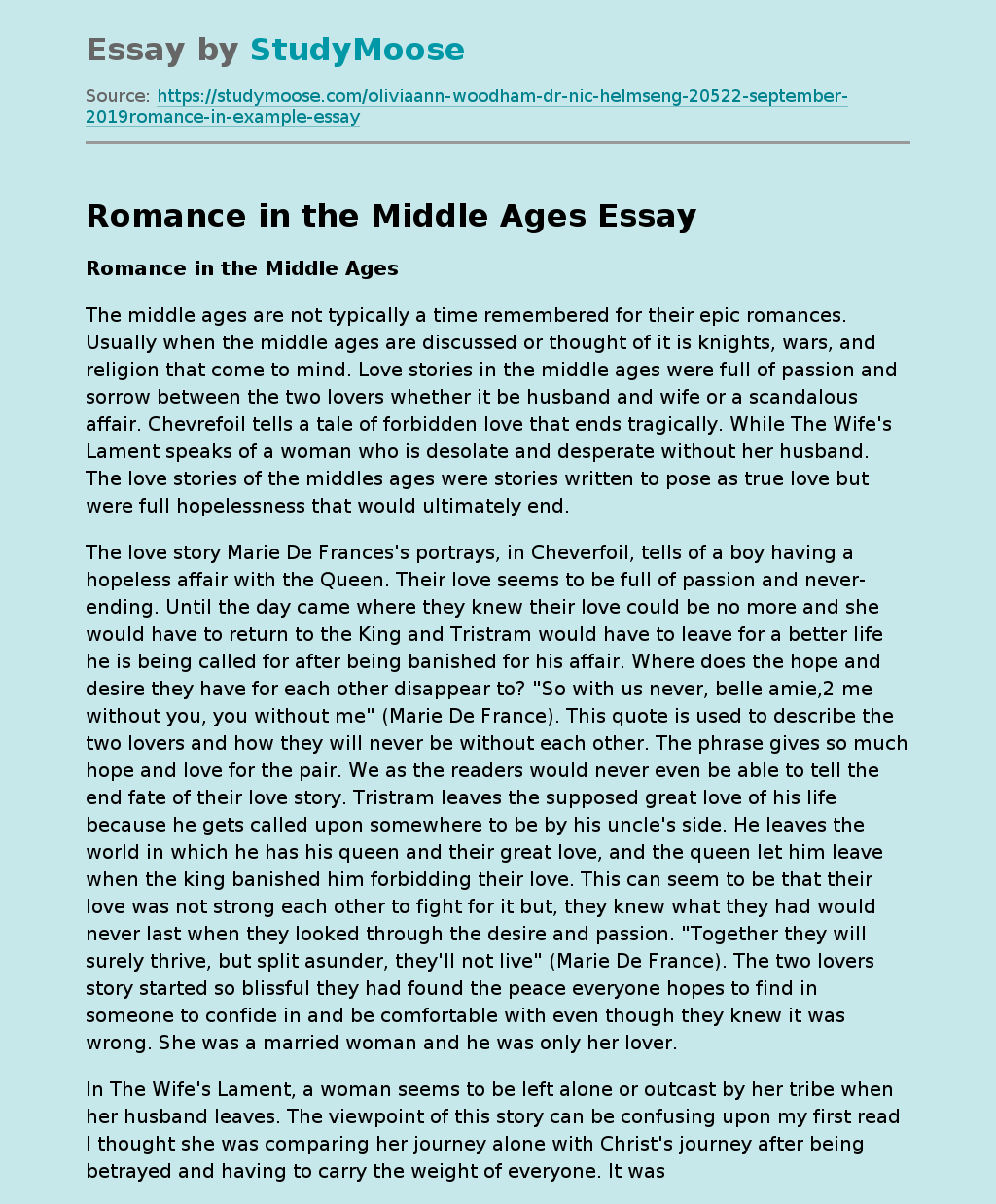