The Relationship of Abelard and Heloise: Women in the Middle Ages

The Relationship of Abelard and Heloise: Women in the Middle Ages

Heloise and Abelard are two prominent figures in love related medieval literature. The story of their love affair, as well as the unfortunate falling out of their relationship set them apart from all others at the time. The Letters of Abelard and Heloise tell a story of a truly historic romance. “God knows I never sought anything in you except yourself; I wanted simply you, nothing of yours.” This is just one example of the true love depicted by these two special individuals.

Don't use plagiarized sources. Get your custom essay on
“ The Relationship of Abelard and Heloise: Women in the Middle Ages ”
Get custom paper
NEW! smart matching with writer

The central idea of The Letters of Abelard and Heloise is about the ins and outs of forbidden love in the middle ages, and also the consequences it entails. Peter Abelard rose in prominence due to his teaching abilities, and innovative thinking. Heloise was the well educated niece of Canon Fulbert. Abelard set his sights on educating Heloise, and offered to be a private tutor to Heloise.

Abelard then convinced the uncle of Heloise to let him live with them in order to better serve Heloise. The passion Abelard had to teach and the passion Heloise had to learn quickly turned into a passion for romance with one another. Lust grew and took over their relationship. Abelard was significantly older than Heloise, about twenty years older. Canon Fulbert, the uncle of Heloise eventually became aware of their relationship, and was completely against it. “Oh, how great was the uncle’s grief when he learned the truth, and how bitter was the sorrow of the lovers when we were forced to part!” Due to the uncles disapproval of the couple they were separated, but something would come up to change this.

Heloise then found out that she was with a child, and left the house of her uncle. She went to Abelard’s sisters house and stayed there until the child was born. Abelard sought Canon Fulbert’s forgiveness and ultimately did receive blessings for them to get married. The couple married, and left their child with the sister of Abelard. Heloise was overcome with extreme guilt when Abelard proposed to marry her. “She, however, most violently disapproved of this, and for two chief reasons: the danger thereof, and the disgrace which it would bring upon me. What penalties would the world rightly demand of her if she should rob it of so shining a light!” Heloise then went on to stay with nuns, and her uncle assumed that Abelard had sent Heloise off to go become a nun.

This tragic and unfortunate love story was not yet finished. Both Heloise and Abelard went on to continue contributing to literary history and living their lives separately. In letters Heloise wrote things such as “While I am denied your presence, give me at least through your words of which you have enough and to spare some sweet resemblance of yourself,” to compensate for the agony of not being with her love. Two lovers had been separated against their will and tried to continue their romance through writing letters. One major debate that was possibly stirred up in this time period may be about the authenticity of the letters. Women in the middle ages did not typically have the intelligence to write these letters in Latin as Heloise did. Then again Heloise was a well educates woman, and this may be one of the reasons why Abelard was attracted to her. Abelard faced a lot of hardship because of how he distanced himself from Heloise to save his reputation. Heloise was also going through problems as well. She was facing hypocrisy because it was impossible to be in love with someone so deeply, and also be deeply involved in religion. Heloise went against the normal, typical, and proper role of women in her society. Heloise viewed herself as a hypocrite; she said that men who did not know her secret longings praised her for her virtue.

She wrote Abelard, “How can it be called repentance for sins, however great the mortification of the flesh, if the mind still retains the will to sin and is on fire with its old desires?” This exert from a letter proves that Heloise never completely gave herself to religion and God, because she always in a way belonged to Abelard. To isolate oneself when one’s heart is not in it requires a great amount of strength. However, it can also be seen as Heloise obeying her husband and joining a convent because she had no say in her life due to the rules in society of that time period. Heloise was lived and was born in a time which women had little to no voice in society. They were to be known as wives and mothers, and nothing more. An alternative to this, and also the only alternative that existed, was to become a nun. Unlike women, men were allowed to do as they please. By this it means that they could me a husband, father, priests, or really anything their hearts desired. However, Heloise was unlike the many women of her time. She wanted to be more than a wife, mother, or nun. She aspired to be a very well educated woman, and this may have been her downfall. Her intelligence is what seems to have attracted Abelard to her. Heloise was somewhat a fortunate woman of her time.

This is because her uncle took great interest in her education, and even took her to Paris to study. At the time Paris had the best education system, and this is why Canon Fulburt took Heloise there. Society felt as though women did not have the intellectual capability to become well educated, Heloise showed them otherwise. Abelard himself even wrote, “A gift for letters is rare in women.” This also stands as evidence as to why he was so strongly connected to Heloise. Despite Heloise’s intellect she was drawn into a great love with Abelard, and could not escape from it. This love she felt for Abelard will ultimately sentence her to a life full of regret. Heloise’s intellectual mind did arise when she connected love to freedom, and marriage to slavery. Heloise knew that at the time marriage was an unequal union and she felt hesitant to become a part of such a thing. Heloise felt virtue was more important than power and wealth. She also made references to women that fall into marriage are not much better than a prostitute. Heloise and Abelard’s love was so strong that she went against her beliefs and allowed her love to overcome her thought. Heloise married Abelard, he was castrated, and then she became a nun; what a life.

The Relationship of Abelard and Heloise: Women in the Middle Ages. (2016, Apr 26). Retrieved from https://studymoose.com/the-relationship-of-abelard-and-heloise-women-in-the-middle-ages-essay 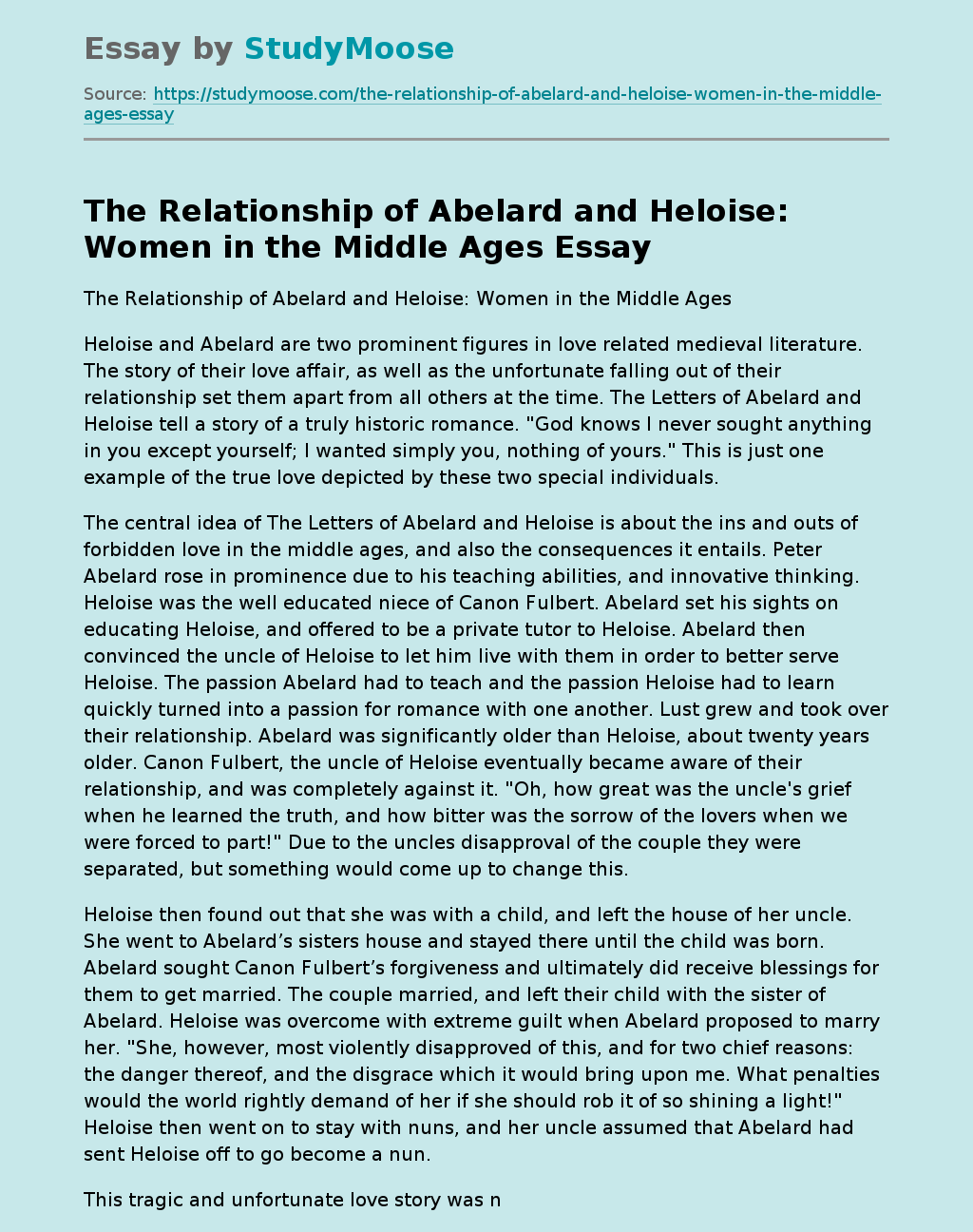