The shifts in the world economy over the past 30 years

1. Describe the shifts in the world economy over the past 30 years. What are the implications of these shifts for international business based in Great Britain? North America? Hong Kong? Answer: The world economy has shifted dramatically over the past 30 years. We have been moving away from a world in which national economies were relatively self- contained entities, isolated from each other by barriers to cross- border trade and investments; by distance, time zones, and language; and by national differences in government regulation, culture, and business systems.

Don’t waste time
Get a verified writer to help you with The shifts in the world economy over the past 30 years
Hire verified writer
$35.80 for a 2-page paper

As late as the 1960s, four stylized facts described the demographics of the global economy. The first was U.S. dominance in the world economy and world trade. The second was U.S. dominance in the world foreign direct investment picture. Related to this, the third fact was the dominance large, multinational U.S. firms in the international business scene. The fourth was that roughly half of the globe- the centrally planned economies of the Communist world- were off- limits to Western international businesses.

All of these demographic facts have changed. Although the U.S. remains the world’s dominant economic power, its share of world output and world exports have declined significantly since the 1960s. This trend doesn’t reflect trouble in the U.S. economy, but rather reflects the growing industrialization of developing countries such as- China, India, Indonesia, and South Korea. This trend is also reflected in the world foreign direct investment picture. The foreign direct investment generated by rich industrial countries.

The second has been the emergence of a growing number of small and medium- sized multinationals, called mini- multinationals. The fall of Communism in Eastern Europe and the republics of the former Soviet Union have brought about the final shift in the world economy. Many of the former Communist nations of Europe and Asia seem to share a commitment to democratic politics and free market economies. If these trends go on, the opportunities for international business may be enormous. The implications of these shifts are similar for North America and Britain. The United States and Britain once had the luxury of being the dominant players in the world arena, with little substantive competition from the developing nations of the world. That has changed. Today, U.S. and British manufacturers must compete with competitors from across the world to win orders.

The changing demographics of the world economy favor a city like Hong Kong. Hong Kong (which is under China rule) is well located with easy access to markets in Japan, South Korea, Indonesia and other Asian markets. Hong Kong has a vibrant labor force that can compete on par with the industrialized nations of the world. The decline in the influence of the U.S. and Britain on the global economy provides opportunities for companies in Hong Kong to aggressively pursue export markets. From the above discussion we can say that we are moving toward a world in which barriers to cross- border trade and investment are declining; perceived distance is shrinking due to advances in transportation and telecommunications technology; material culture is starting to look similar the world over; and national economies are merging into an interdependent, integrated global economic system.

2. Imagine that Canada, the United States, and Mexico decide to adopt a fixed exchange rate system. What would be the likely consequences of such a system for (a) international businesses and (b) the flow of trade and investment among the three countries? Answer: Before there was money, the exchange mechanism for trade was simple barter. For each transaction, the parties needed to negotiate the relative worth of the goods and services they sought to trade and then execute. Such a process can be very time consuming and imprecise, without, of course, having a market currency price to begin with. The exchange-rate system is an important topic in international economic policy.

Upon the implementation of a Single Currency, and the gradual disappearance of the foreign exchange market in those countries, the infrastructure can be dismantled and utilized for other purposes. Elimination of the Need to Maintain Foreign Exchange Reserves: With no need to defend an exchange rate and no need to thwart an externally sourced currency crisis and no need to defend against speculators, there would be no need for the Central Bank of those three countries to maintain foreign exchange reserves.

Reduction of the Cost of Operating an Entirely Separate Monetary System: Thanks to economies of scale, it costs less per capita to administer foreign exchange monetary policy for a monetary union than for its individual country members, and the economies of scale increase as the monetary union expands. As the number of currencies decreases, the cost of administering the multicurrency foreign exchange system also will decrease until it reaches the logical end point of zero—with a fully implemented Single Currency in USA, Canada, Mexico.

Elimination of the Balance of Payments/Current Account Problem for those Countries: The balance of payments is the sword of Damocles hanging over central bank because a lingering current account imbalance threatens a lowering of the value of a currency, and even possibly a currency crisis. Furthermore, since these imbalances will eventually be corrected, one way or another, it is worth bearing in mind that a disorderly adjustment of global imbalances would harm those countries. Conversely, an orderly adjustment or transition to a Single Currency will help those three countries.

Eliminate of the Possibility of Currency Exchange Rate Manipulation and Intervention by Countries: A significant source of tension among countries has been the concern that other countries manipulate the exchange rates of their currencies to their own advantage by buying and selling massive amounts of currency in the foreign exchange markets. Curiously, this concern always has seemed to mean that a country would intervene to devalue its currency rather than revalue; but this is something that economists will no longer need to study and thus USA, Canada, Mexico will have a steady rate of the fixed currency.

Elimination of the Fluctuations of Currency Values:

It is a truism that stability is a cornerstone of a sound, worldwide financial system. While the necessary partner to investment is risk, it is safe to say that investors seek to minimize risk. Currency fluctuations are risky. No one wants to work hard for a year and hope for a return on an investment of work or money and find that currency fluctuation eliminated the return, or, worse, created a loss. With a Single Currency, there shall be no currency fluctuations and more investors will be interested to invest in the USA, Canada, and Mexico.

The value of money should not be subject to the needs and greed of speculators. There are no speculators in the length of a meter or the weight of a gram and there need be none for currencies. The Single Currency will present a different choice for speculators: if they wish to speculate, they will need to choose another commodity, as the peoples’ money will no longer be for sale.

The benefits from a world currency would be enormous. Prices all over the world would be denominated in the same unit and would be kept equal in different parts of the world to the extent that the law of one price was allowed to work itself out. Apart from tariffs and controls, trade between countries would be as easy as it is between states of the United States. It would lead to an enormous increase in the gains from trade and real incomes of all countries including the United States. The Single Currency would stimulate trade of USA, Canada, and Mexico the most in those developing countries where inflation and currency risk have been high.

Drawbacks in the international businesses and the flow of trade and investment:

Before the rise of nation states and before the time when coins and bills featured national themes and the images of national heroes, the users of money felt no loyalty to money, except the desire that it not lose value. When nation states began issuing money, the bills and coins became symbols of their history and power. Some people are tempted to view such symbols as they do their flags and national constitutional documents, and the loss of such symbols can be considered a national loss. However, money is different from flags. Given the extent and growth of monetary unions, it is now apparent that people care more about the value and stability of their money than they do about whose image is stamped and printed on their coins and bills. Still, the feelings for nationalism remain very strong in the USA, Canada, and Mexico, and they are hard to overcome.

Need for Independent Monetary Authority to Deal with Local Economic Needs Which will Require Adjustments of Interest Rates or Money Supply or Exchange Rates: As previously discussed, a major concern of many international economists is their view that nations need the flexibility to be able to adjust interest rates to heat up or cool down an economy and to influence exchange rates to achieve the same goals. It is very difficult to evaluate the true value of the cost of losing that ability, if it is a cost at all. In a world where inflation and interest rates are low, the loss of the ability to lower interest rates in order to stimulate investment is not as powerful a tool as in high-interest rate economies.

Employment for Those Maintaining the Current Multi-currency Foreign Exchange System:

Full-time foreign exchange traders in the world, and they are all very bright people. With the movement to a Single Currency, they will either move to trade other commodities or stocks and bonds or retire or move into some other kind of work. In the conclusion of the discussion we can take a view that both merits and demerits come about of having single fixed currency. As because USA, Canada and Mexico are considered to be some of the most powerful and economically strong countries in the world so those countries need to follow up and analysis before imposing a fixed exchange rate system.

3. You are the international manager of a US business that has just developed a revolutionary new personal computer that can perform the same functions as existing PCs but costs only half as much to manufacture. Several patents protect the unique design of this computer. Your CEO has asked you to formulate a recommendation for how to expand into Western Europe; your options are (a) to export from the Bangladesh, (b) to license a European firm to manufacture and market the computer in Europe, and (c) to set up a wholly owned subsidiary in Europe. Evaluate the pros and cons of each alternative and suggest a course of action to your CEO.

The shifts in the world economy over the past 30 years. (2016, Apr 18). Retrieved from http://studymoose.com/the-shifts-in-the-world-economy-over-the-past-30-years-essay 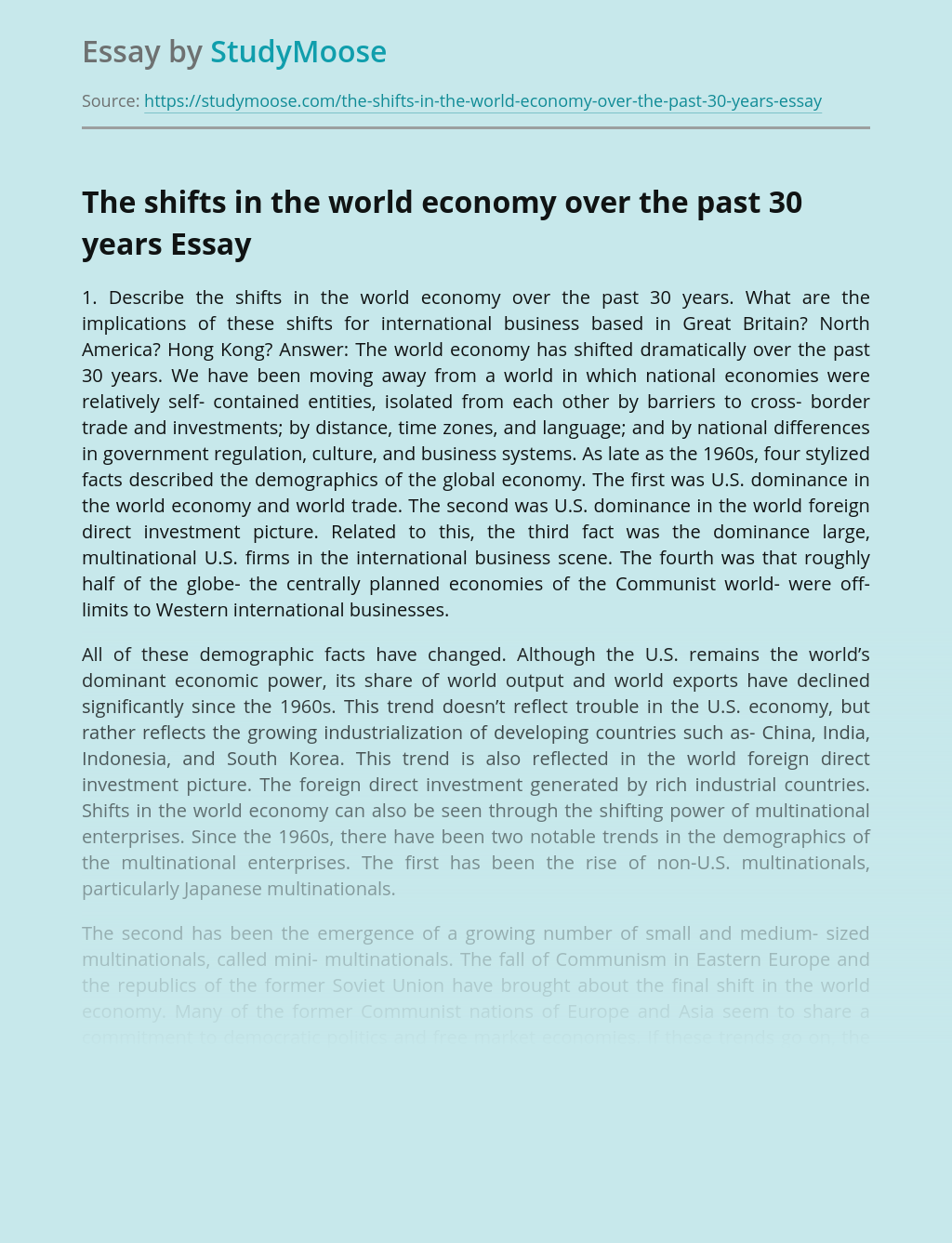 Don’t waste time
Get a verified writer to help you with The shifts in the world economy over the past 30 years
Hire verified writer
$35.80 for a 2-page paper
Stay Safe, Stay Original