Mississippi Burning is a film directed by Alan Parker that was released in 1988. It depicts the case of Mississippi Burning, which took place in 1964, where three civil rights workers went missing. The FBI was notified only to find the sheriffs office linked to the Ku Klux Klan and accountable for the disappearances of the three boys. This film follows an investigation carried out by FBI agents into the disappearances of three civil rights workers, who campaigned for the rights of “blacks”.

Don't use plagiarized sources. Get your custom essay on
“ Analysis of Mississippi Burning Movie ”
Get custom paper
NEW! smart matching with writer

As the case unfolds, vital evidence, such as the workers abandoned car are found and turmoils are faced by the main characters, Agents Anderson and Ward. The case proceeds when more FBI agents are called in and the sheriffs offices involvement is discovered. As a last resort, Ward does things Andersons way and as a result, information is received from the Deputys wife, which leads to the bodies being recovered and the men involved, charged with violating civil rights.

The film is set in the fictional town of Jessup County in Mississippi.

Segregation is prominent in this town where many of the whites; live in the town, whilst the blacks; are shown living on the outskirts in rundown houses. The setting is also presented in a manner where the town is shown to be in the middle of nowhere in order to depict the belief that their crimes would go unknown due to its isolation to the higher authorities.

Mississippi Burning is a fictionalised depiction of the events in Mississippi in 1964.

The movie portrays a period in history during the 1960s, where segregation and racial discrimination dominated. It was a period when civil rights movements were held to fight for the rights of “blacks” such as the Freedom Summer Movements and The Watts Riots of 1965. There was also the strong presence of racial groups such as the KKK and the corrupted authorities, who possessed great influence in those times. Many people also voiced their concerns such as Malcolm X and Martin Luther King in the struggle for their civil rights.

The film “Mississippi Burning” gives an accurate account of the 1960s; however a few discrepancies can be identified through analysis of that historical period. In the movie, many scenes present the reminder of segregation and racial discrimination as seen in the 1960s. These include the first scene, where a contrast is shown between the two water fountains, at the restaurant, where coloureds were separated from the whites and the strong presence of the distinctive racial groups.

Some of the discrepancies identified were that there was no representations of retaliation from “blacks”, an expression that the FBI were the heroes and a stereotypical view given to all locals, which was not the case. The film, “Mississippi Burning” contains a vast array of characters, but two main characters are Ward and Anderson, who are the FBI agents in control of this investigation.

Agent Ward, acted by William Dafoe, is the more conservative type of person. He was described by Anderson as the type that crossed the t’s, implying that Ward only knew one approach. Ward’s role in the movie was also primarily dominating as he made all the decisions such as interviewing witnesses and gathering evidence; however, it was apparent that with this approach, the case wouldn’t be solved.

William Dafoe portrayed Ward convincingly through his attire, where he was formally dressed at all times and the use of glasses to depict a compliant attitude. The way he spoke also brought about a convincing attitude where formal language was always used.

However in contrast, Agent Anderson, acted by Gene Hackman, is the type of person that does things his way. Anderson’s method was demonstrated during the film when Anderson passively scrutinised the deputy’s wife to obtain facts required for the conviction. He also orchestrated other events, for instance, the scene when the KKK members turned on each other due to Anderson causing an internal quarrel. It is obvious that if it wasn’t for Anderson, the case wouldn’t have been solved. Gene Hackman portrayed Anderson very convincingly as his attire was always casual and his use of language depicted his aggressiveness. His stature was also related to the attitude Anderson portrayed as well as the aggressive voice that accompanied it.

“Mississippi Burning” was released by Orion Productions in 1988. At this time, segregation had been minimised in most communities and equality between races and gender were on the rise. Society had become modern where living standards and the economy had increased. The “Klan” had also gone into hiding and laws had been created in order to protect the rights of each individual no matter what race they were.

There were still the groups/individuals that were prejudice in different aspects of life. But, the majority had started to treat each other as equal whilst others were treated like heroes for their efforts such as Martin Luther King Jr who received a Nobel Peace Prize that year.

Much progress had been made since the 1960s in regards to racism, that many people saw this movie has a way to bring about awareness. Some organisation had praised it as it gave an insight into how “blacks” were treated, but still held their heads high. People also saw the film as a way to see the true extent of what life was like for a coloured during the 1960s and to understand their pain through startling images of the “Klan’s” acts.

Criticism was also expressed towards the film as many critics claimed that the “blacks” had been portrayed as helpless scared people who didn’t help the civil rights struggle, but instead, needed whites to come to their aid. Critics also fault the film, for not representing the “blacks” who played vital roles and also for the stereotyping of all Mississippians as racists.

Throughout the film, the angle of a low angle shot has been extensively used to convey certain moods and emotions. This technique consists of positioning the camera below the figure, in order to obtain a particular effect. The low angle shot was used in the film to show power and vulnerability such as in the scene when the burning cross was shown where it illustrated the powerful symbol of the cross and the supremacy it had.

The shot of the extreme close up was also used where a close up was given of an object. This technique was primarily used to display qualities of a person and the expressions manifested on their faces. An occurrence in the film was just before Frank shot the civil rights workers, where a close up of his face was portrayed. This was done in order to depict his expressionless face and the way he had no remorse for his actions.

Lastly, the technique of sound was also used where diegetic and non-diegitic sounds were used. These types of sounds included voices, where as non-diegetic sounds covered mood music. This technique was expressed during many scenes in order to set the tone such as when the characters were speaking and the mood music of gospel singing being used. This gospel singing was used to create the sad and sombre atmosphere and to also engage the viewer’s emotions. Overall, this movie was a clear depiction of the events in the 1960s and is a successful text in keeping this history alive through the passing to future generations. 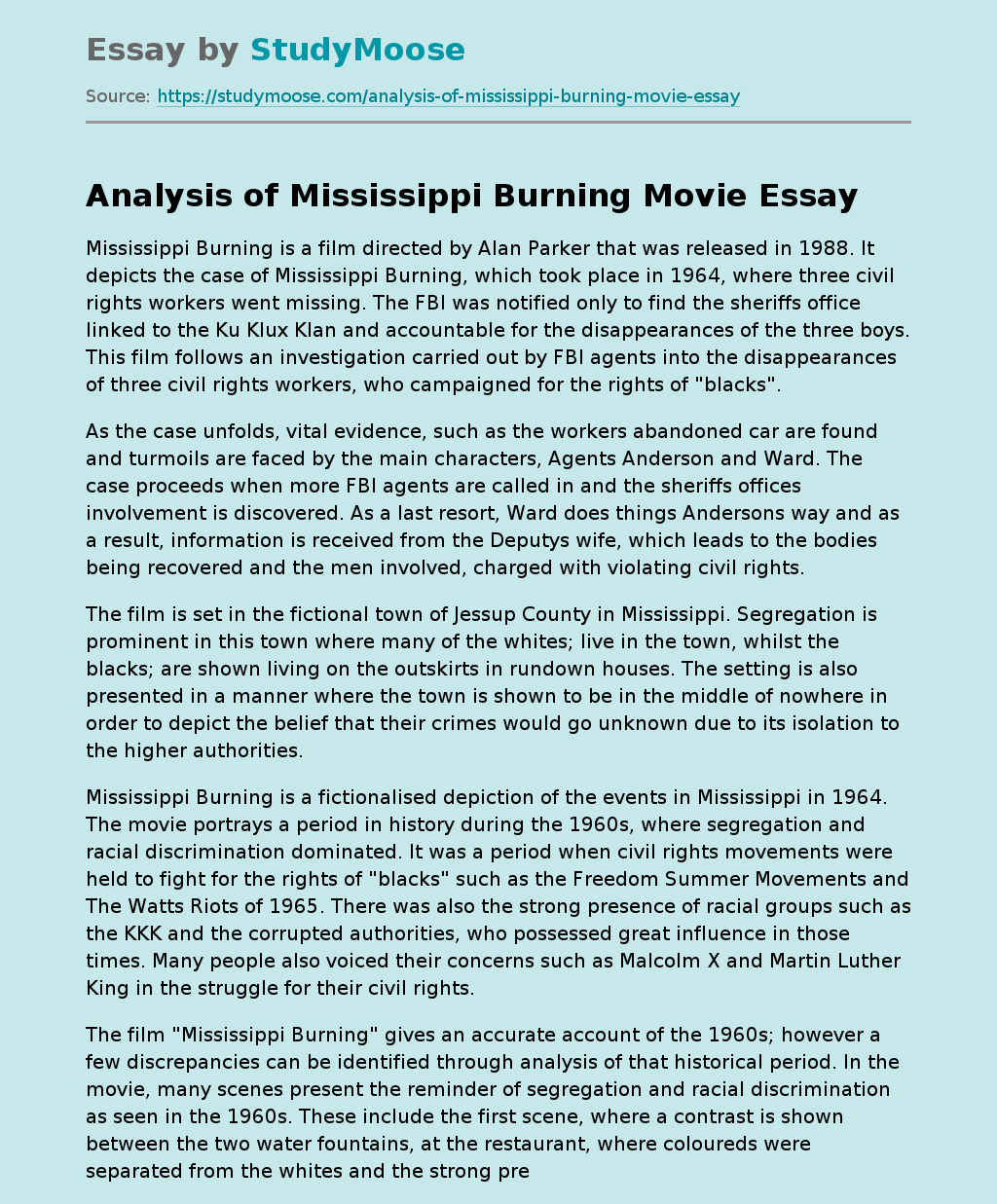