The scarcity of jobs in today’s world has not made life any easier for the young and productive generation of the 20th century. Hope for quick employment has really become a thing of the past and wishful thinking for most. With graduation steadily becoming inversely proportional to the hope of employment, and each rolling year slowly fades out hopes glimmering light. The result of job shortage has brought about serious consequences for most organizations through company loses, misappropriation of funds, forging of documents, fraud, violence, inappropriate work culture and unfair recruitment process.

Don't use plagiarized sources. Get your custom essay on
“ The Importance of Pre-Employment Background Investigation and How It Applies to My Organisation ”
Get custom paper
NEW! smart matching with writer

In a third world country where information as mentioned in this paragraph is not centralized or computerized, detailed screening can pose such a great challenge. The process of pre-employment screening can be looked at on two different levels.

To begin with, the one who is fresh from school usually has no work experience. They solely depend on the university or the institution from which they qualified. In exceptional cases, a work experience reference could be obtained from an organization where they did their internship or practical attachment.

At this level, the desperation for employment is so great that individuals forge result statements or certificates even if they did not graduate. The danger is obvious, as such individuals will often cause poor performance at work and be the cause of serious accidents in an engineering section as an example. Although one can argue that worker who usually forge certificates exert themselves to the limit and as a result perform well, a great majority also cost companies through loses and lawsuits.

A good example would be Individual X who pretended to be a doctor for years and caused a lot of unnecessary deaths. All illnesses for him were prescribed Antibiotics and Analgesics, regardless of the condition. When Dr x was finally investigated, it was discovered he was actually a ward attendant. Those who have been employed before have a higher level of fraud, as most would have learnt the tricks of the trade. At this level, they may be involved in large fraud cases from the exposure to various clients whilst on the job.

Furthermore they may forge qualifications in order to gain promotions. Another common problem is the reduction of ones years on the NRC in order to delay retirement age. Sometimes finding out why an individual left an organisation to join another can save a company from employing the wrong person. People usually leave companies because the have found greener pastures or they have committed a crime and resign quickly to prevent exposure. For example, Miss Y left company A to join B. A background check revealed that Miss Y stole US$ 20 000 from company B and was absent from work without leave.

Efforts to find her proved difficult as she moved from the residential address in her file a year ago. With this information, company B decided not to employ her and asked to clear her obligation to company A first. My company, LyoDye Printers Ltd, deals with dying material, tailoring, printing and embroidery of uniforms for schools, house helps, company workers, cadet recruits and health workers. The increasing demand for the service has lead to LyoDye expanding its operation by opening a new branch in Lusaka.

This move means there is need for a second accountant to manage finances in Lusaka. Prior to employing a suitable candidate, I would present the candidate with 3 referee forms. Two professional references for the head and any other person they worked with and the third for a character referee personally known to the potential employee for at least 3 years. The reference form to the Human resource manager or head of institution would be structured questionnaire with specific closed ended questions requiring a tick on whether good, satisfactory or poor.

The bottom of the questionnaire would have 6 lines for any other comments. Some of the questions would look at history of disciplinary action against the individual, time keeping, honesty, dress code, ability to work as part of the team, financial obligations to the company, work culture and many others. The other two references would be open ended. Once I receive the forms, I would make further follow up by calling the referees for a telephone affirmation of their reference and to ask a few additional questions.

I would then proceed to send the prospective employee for basic pre-employment medicals. Supposing that, the employee has satisfied all these conditions, I would the offer them a conditional offer of employment by a three month probation period to practically assess their capabilities. Moreover, there are some characteristic behaviours that can be hidden on pen but not in person. In view of this, I would also perform self, peer and superior monthly assessments. This would ensure investigations are a continuous process rather than an ultimatum.

Successful companies are a result of great leaders, carefully selected and trained workers. Without these, a company would only be a well-equipped building or just a name. Statistics have proved the absolute danger of blind recruitment. Many have indeed lost time, money, reputation, equipment and for some lives due to incompetent workers who at one stage forged their way to employment. For this reason, pre-employment investigation is the only ways to safeguard against such infelicity, and like Talorism, should be considered a rule of thumb for the recruitment process.

Essay on Justice • Essay about Recruitment

The Importance of Pre-Employment Background Investigation and How It Applies to My Organisation. (2020, Jun 02). Retrieved from http://studymoose.com/importance-pre-employment-background-investigation-applies-organisation-new-essay 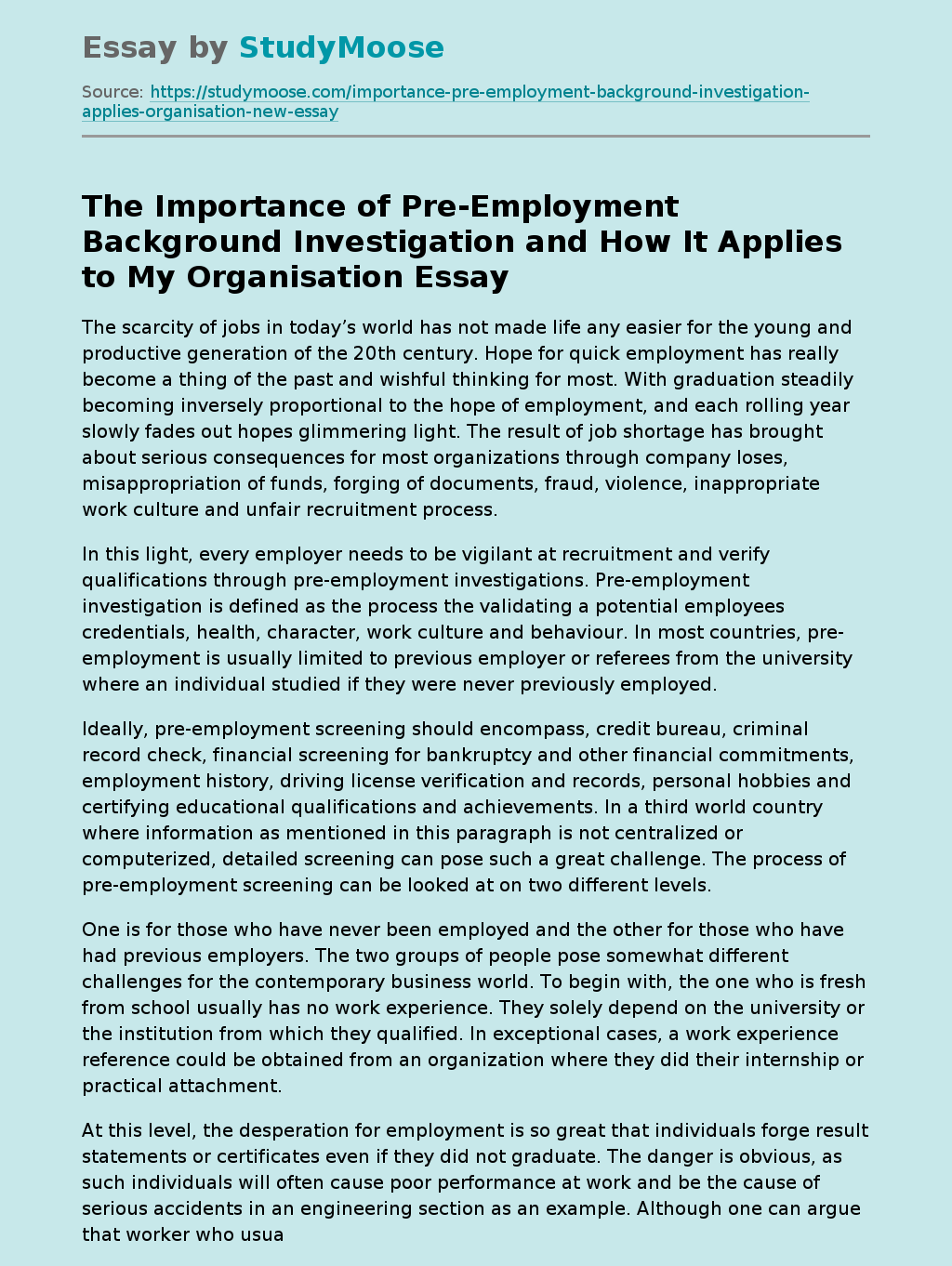