Don't use plagiarized sources. Get your custom essay on
“ Coach Carter and Communication ”
Get custom paper
NEW! smart matching with writer

The film “Coach Carter” is a great film about a high school basketball team that is located in a bad area of town. The kids that play for this basketball team unfortunately do not have some of the opportunities as other players of different team may have. This is just a fact of life; some people are fortunate to have a community and parents that are in a position to provide their children with good opportunities to succeed in school and in life, while other children do not have the same luxury.

Some communities, parents, and schools unfortunately are not in the position to provide the same opportunities to their children and student athletes, whether due to financial reasons or other reasons. It is just a fact of life that sometimes people have to fight and work very hard to rise above the challenges life presents to them and through the road of hard work to accomplish their goal they will grow as a human being and become a better person in the end.

One quote from the film that stuck out to me is when Coach Carter is addressing his team after they lost the game against Saint Francis at the end of the film. Carter states; “l came to coach basketball players, and you became students. l came to teach boys, and you became men. ” This quote is a great example of the correct use of praise. In Chapter 11 “Effective Communication: The Foundation of Effective Leadership”, Anshell describes the sandwich approach model to praise and critism presented by Smith & Smoll (1977). The sandwich

approach tells us the correct use of praise and gives us a formula to use to make sure we give praise to our athletes in an appropriate manner. The sandwich approach states that you should say something positive, correct the skill that needs attention, and end with another positive comment. In the qoate from the film I used above, Coach Carter does not use the sandwhich approach excatly as it is modeled, but he does praise his team in an appropriate manner. A coach will be more efffective in correcting the skills and habits of any of their athletes by using the sandwich approach.

The athlete will feel good about himself/herself hearing the first positive statement and this will also grab that athletes attention to the constructive critism or skill critique from the coach. The coach will leave the athlete with a positive concluding statement such as, “I see you excelling in the future with this”. The athlete will still have a good feeling at the end of the conversation and will pay attention to what the coach told him to do differently to improve his/her skill.

In the movie, Coach Carter is consistent in his statements about what his intentions are as the new basketball coach and what his goals/expectations are of the young athletes. Chapter 11 of our text book, Anshell discribes the Ten Commandments of Communication. The Ten Commandments of Communication are as follows: “Thou shalt: (1) be honest, (2) not be defensive, (3) be consistent, (4) be empathetic, (5) not be sarcastic, (6) praise and criticize behavior, not personality, (7) respect the integrity of others, (8) use positive nonverbal cues, (9) teach skills, and (10) interact consistently with all team members.

It’s the same message that we as a culture send to our professional athletes; and that is that they are above the law. If these boys cannot honor the simple rules of a basketball contract, how long do you think it will be before they’re out there breaking the law? I played ball here at Richmond High 30 years ago. It was the same thing then; some of my teammates went to prison, some of them even ended up dead. If you vote to end the lockout, you won’t have to terminate me; I’ll quit. ” This statement is very powerful and certainly gets Coach Carter’s message across to the administration and the parents of his players.

The consistency of Carter even in a high stress environment and a very tense situation, he stands behind his beliefs and never once lets up or lets something go like ending the lockout so the basketball team will play the big game and stay undefeated. The players respect Coach Carter and his decision to keep the lockout in effect until the whole team has the GPA requirements to play games, as stated in the contract they signed. The team demonstrates their faith in their coach with the statements they make when Carter walks into the gym after the board made the decision to end the lock out to let his athletes know what the board decided.

Coach Carter enters the gym to find his basketball team sitting at desks and studying instead of practicing. The team says the following when Carter walks into the gym; Jason Lyle: “[to Coach Carter as he walks into the gym] Sir, they can cut the chains off the door, but they can’t make us play. ” Damien Carter: “We’ve decided we’re going to finish what you’ve started, sir. ” Worm: “Yeah, so leave us be, coach. We’ve got shit to do, sir. ” After Worm finally answers Coach Carter’s question; What is your biggest fear? Jason Lyle says; “You said we’re a team. One person struggles, we all struggle.

One person triumphs, we all triumph. ” This scene shows how Coach Carter’s communication skills inspire and motivate the players to improve on and off the court. I believe that coaches should focus on teaching their athletes more than just the game that is being played, but a good coach will demonstrate and teach young athletes about “life”. A good coach focuses on the entire picture of developing good strong contributing members of society. Coaches should give the athletes skills that will carry each athlete through life and teach the athletes the skills/lessons that will help them succeed. 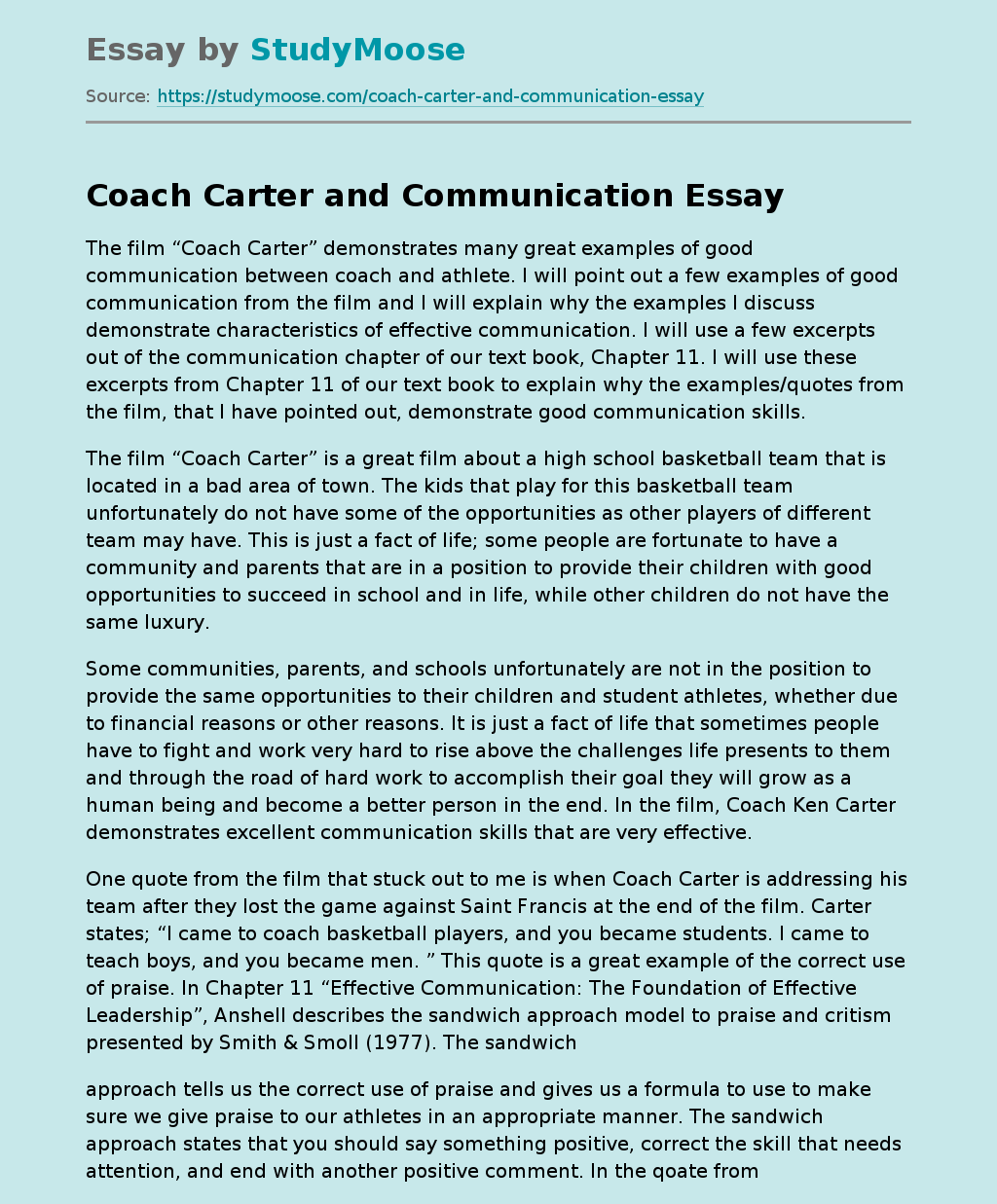