Please respond the following questions in regards to story elements that include an exploration in terms of character, setting, structure of timing, point of view( POV), themes and issues, cause and effect, opening and closure, camera work, lighting, sound, performance, and editing. How is the character believability achieved? (Provide examples from film) They seem so realistic and believable as real people because of the detailed facial expressions the animators focused on to add emotion and the buildup of the background of each character with voice over added reality to the film.

For example, how scared Victor was when the “Corpse bride” grabbed his hand. How is character empathy and identification achieved? (Provide examples from film) Character empathy and identification was achieved by having to see the sorrow in their eyes and their voice. Even without the sight of a human, our ears can sense the softness and innocence in a person’s voice as they are depressed, aggressive, or cheerful.

How does the setting relate to the narrative? (Choose a specific example/scene from the film).

The setting has pathetic fallacy, with the dark eerie mood and dark skies and white skin. With excessive use of black and white, it adds a scary and tragedy which matches the story line. How does the mood and ambience of the setting create meaning for an audience? The ambience of the movie with the droopy effect of the background and foreground helps the audience be in the mood for the story line. Are events shown in chronological order or is there use of flashback or flash forward? (Provide an example within the film).

Events are in chronological order with one use of a flashback when they were telling Victor about the story of the girl. From whose point of view is the narrative presented? Victor’s point of view was presented mostly in the movie.

Do we see it through one character’s eyes or more than one? What are the effects of this? We see the story from Victor’s, Emily’s and Victoria’s point of view. It adds variety and information to piece it all together into one story. What themes and issues are introduced and how are they developed and explored? The theme of love was based throughout the movie. They were shown through the marriage of Victor and Victoria, and Victor and Emily. What motivates the characters? (Choose a few characters to discuss motivations). Victor is motivated to get back to the real world because he is in love with Victoria. Emily was motivated throughout the movie because she saw Victor trapped by the Corpse bride and he needed to be saved. Describe the extent to which the conflicts, motivations, and issues are resolved or unresolved by the end of the film. Many conflicts were resolved such as Victor’s shyness, him proposing to Emily and an unknown conflict which was Lord Barkus and Emily’s marriage.

What impact/effect does the concentration of the length of a shot have on the audience? The film was at a reasonable length to where it wasn’t too long, dragging on the story, yet wasn’t too short to leave people and problems unresolved. How is an audience’s engagement with the narrative created by the choice of camerawork? The camera work was used with many medium/close up shots to show the emotion and depth behind the characters. In these surreal times, where Claymation was used, long shots would be less effective. Are any lighting effects used, for example, to emphasis an object, a character or an action? There was pathetic fallacy where it was dark and gloomy to emphasize the dramatic events during the proposal from Victor to Emily. As the chase seen had happened, darkness came upon them, the dark scary trees and shadows.

How does colour affect the mood of a scene? (Be specific and provide a few examples from the film). The color affected the mood in a dramatic way. With the grayscale style texture to the movie, it added a feeling of old and historic. How do the placement, timing, and rhythm of the editing affect the mood of a sequence and of the overall film? It made the film flow and run smoothly, where the timing of the music comes in, to a suspense and tension to the characters and the scenes.

How does the soundtrack relate to the storylines, themes and issues of the narrative, characters and plot. The soundtrack selection makes the issues and conflicts stand out more that it should. It adds more tension and suspense than just it happening with no sound. It related well to the character and the scene its played in and helps build character mood. How does the actors (in this case, the actors voice) contribute to the characterization? The way the actors manipulated their voices to match the characters added a lot to the movie. It matched them so well, it seemed like they were their own person. It built up the background of the person, and gave depth to what type of person they were before we knew. Are there characters that repel the audience? Why?

Lord Barkus repelled the audience in my opinion. The way he looked and the way acted and talked, was very stingy and unattractive. It was disturbing to listen which matched his role in the movie well. Did you enjoy the film? Why or why not?

I enjoyed the movie a lot for the most part I’ve seen. I have watched it before a long time ago, but watching it again really was nice. Even though I was sick and didn’t realize have the things that were happening, I really did enjoy the movie. 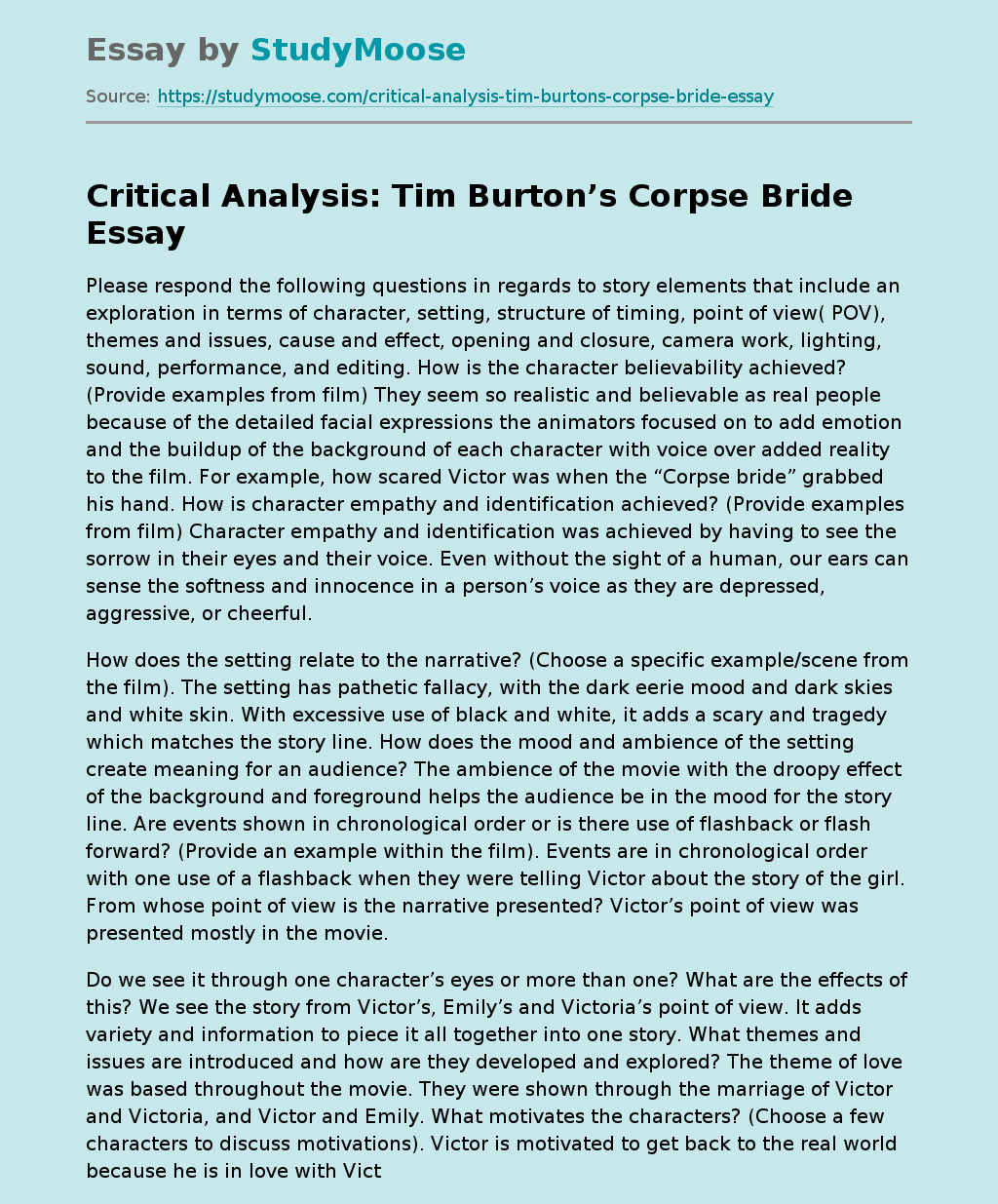