The spreadsheet I did presents a summary of Blue Nile financial results from 2005 to 2009. From 2005 to 2007 revenues and net income both increased. The deep recession which began in late 2007 seriously affected the revenue in 2008. And then in 2009 the revenue recovered and increased slightly. I am going to analysis the financial performance in three parts. First, profitability ratios. Blue Nile had steady return on asset ratios around . 1. The company utilized its assets very efficiently and outperformed their competitors.

By doing research on Yahoo Finance, we know the industry return on equity is 0.

Don't use plagiarized sources. Get your custom essay on
“ Blue Nile ”
Get custom paper
NEW! smart matching with writer

18. Blue Nile’s return on equity ratio was much higher. It created better return to investors. Net profit margins were mostly lower than the industry average level. For example in 2009, Blue Nile only had net income of 4 cents for each dollar sale. Its low margins can be explained by its low pricing of products. As Rita said, Blue Nile had a much lower markup than Tiffany. Blue Nile’s number for liquidity ratios are impressive.

Such high ratios from 2005 through 2009 show the company’s great ability to pay short-term debt. One of the company’s strategies is that suppliers finance Blue Nile’s sales growth. (??? ) The business model contributed to higher sales volumes with minimal additional capital investment. With respect to leverage ratios, Blue Nile had really low long-term debt to equity ratios compared to the industry. Tiffany’s long-term debt to equity was as high as . 39.

Because Blue Nile offered a balance between the debt to equity range and firm’s cost of capital, its capital structure was optimal.

The company had low capital investment financed by creditors and bondholders. Its debt to assets ratios are over . 5, which means it, had a lot of debt obligations. However, most of the company’s debt was current and it was able to pay off creditors in a timely manner. Creditors did not need to worry about getting paid. Blue Nile’s strong financial performance intuitively indicated the company’s strategies were pretty well-conceived and well-executed. 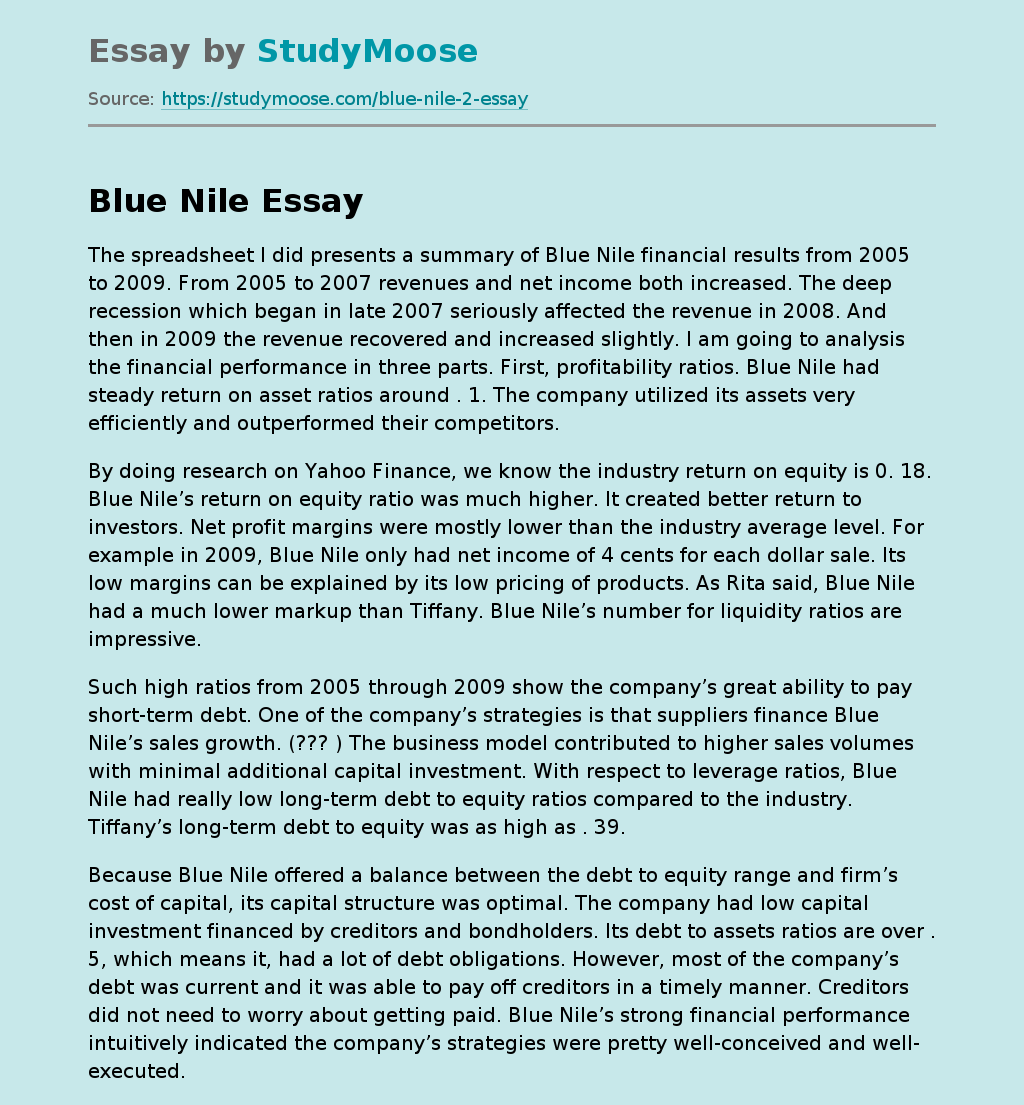