The Influences of Oscar Wilde

Throughout his life Oscar Wilde had many strong influences exerted upon him. During his early childhood his mother influenced him and into college some of his professors and certain philosophers left a substantial impression upon him. Into adulthood these influences leaked out in his writing. These influences gave him ample ideas for writing The Picture of Dorian Gray. Wilde’s study of the Hellenistic ideals of Epicurus, his coddled lifestyle as a child and his devotion to the movement of Aesthetics and Moral Ambiguity have produced one of the most astounding works of horror fiction.

Don't use plagiarized sources. Get your custom essay on
“ The Influences of Oscar Wilde ”
Get custom paper
NEW! smart matching with writer

Oscar Wilde’ more effeminate attitude toward life and the way he looked at beauty can be attributed to his mother, Speranza. “It was said that Speranza (Wilde’s mother) had hoped for a daughter. This may well be true, as she had already had one son. It is said that Speranza dressed Oscar in girls clothes. This is true in a way: all middle-class Victorian boys were dressed in petticoats during their infancy”(Fido 16).

From these statements one may think that it was Wildes Mother who drew out his homosexuality. She very well may have, but she also taught him grace and gave to him a love of beauty most men never seem to appreciate. In treating Oscar as a daughter for the first few years of his life, Speranza set off a chain of events that would spawn a victory and a tragedy.

She set into motion a philosophical and analytical mind. A mind which would shy away from the mainstream and create for itself a genius of its own.

” Speranza encouraged her son to value the highly artificial novels of Bulwer-Lytton and Disraeli above plainer and greater work of Victorian Fiction. Her uncle Charles Robert Maturin’s Gothic romance ‘Melmoth the Wanderer was a book that mother and son both held to be one of the major works of the early nineteenth century”(Fido 18.)

This same story “Melmoth the Wanderer” has many similarities to the more recent Picture of Dorian Gray. This presents the evidence that Wilde was greatly influenced by his great-uncle Charles Robert Maturin. “There is also in ‘The Picture of Dorian Gray’ distinct evidence of direct borrowing from ‘Melmoth’. In the opening chapter of Maturin’s novel, when Melmoth, the young student, comes to his miserly uncle’s deathbed, he is sent to fetch some wine from a closet ‘which no foot but that of old Melmoth had entered in nearly sixty years.’

There, amidst ‘a great deal of decayed and useless lumber’ such as that which later furnished the locked and abandoned school room where Dorian Gray concealed his compromising portrait, young Melmoth’s eyes were ‘in a moment, and as if by magic, riveted on a portrait’ whose eyes ‘were such as one feels they wish they had never seen, and feels they can never forget'”(Roditi, 48). From the painting to the settings is clear that Oscar Wilde’s family was a crucial influence in the literary portion of his life, but it was not just Wildes family that gave him his ideas.

During Wilde’s college years he came into contact with a movement known as Aesthetics and the Epicurean philosophy of Hellenism. Aesthetics is the branch of philosophy that deals with questions of beauty and artistic taste. During his college years at Oxford, Oscar Wilde attended lectures by John Ruskin on The Aesthetic and Mathematical Schools of Florence. Ruskin, who at the time was the Professor of Fine Arts influenced Wilde along with others such as Walter Pater, an aesthetic professor and Max Müller, Professor of Comparative Philology.

Wilde became acquainted with the teaching of John Ruskin through attending many of his lectures while still an undergraduate. These lectures were mostly based upon the ideas of aesthetics. It is known that Wilde enjoyed Ruskin’s teaching and was a sometimes disciple of his. Even in later years he was seen reading his works such as Fors Clavigera and The Poetry of Architecture. ” From Ruskin’s ideas and example sprang a good portion of Wilde’s concern for social questions and hiss awareness of the necessary connection between art and English life.”(Ericksen 16)

Along with Ruskin, Walter Pater influenced Wilde. “But the most important influence at Oxford was Walter Pater, Fellow at Brasenose College and the writer of the sensational Studies in the History of the Renaissance (1873). Pater’S skepticism and the belief that followed, that the study of one’s private experience is more fruitful than the study of a chaotic external world, represented an exciting contrast to conventional social and moral wisdom. For a sensitive young undergraduate like Wilde to learn that the aim of life is to cultivate the deepest response to what is beautiful profound, or curious is to place in front of him an irresistibly attractive way of life.”(Ericksen 17) This indicates that Pater was a direct influence on Wildes insatiable love for beauty which spilled over into The Picture of Dorian Gray.

During his college years Wilde also came across the teaching of Epicurus, a Greek philosopher who lived from 342-270 B.C.E. and taught that pleasure was the highest good. He was “active during the Hellenistic period” and “had a defining influence on those defined as Aesthetes and Decadents, particularly Walter Pater and his occasional disciple Oscar Wilde.”(Terpening 1) The Victorian aesthetes, such as Wilde and Pater concerned themselves with sense-perception, wholeness, and the soul. It was the belief of Wilde that “the exterior beauty of a man conceals inner moral decrepitude to those who do not contemplate in earnest . . . Dorian Gray’s greatest sin is not surrounding himself with beautiful things – on the contrary, these objects foster pleasure, the supreme good – but depending upon those objects to retain interest in life.”(Terpening 1)

Not only did Wilde come into contact with Aesthetics, Epicurus, and Hellenism, but he also learned the use of Moral Ambiguity. This is the art of doubt at its finest. It creates a character in which his personality does not allow for the reader to make a whole hearted opinion of its goodness or badness. This character is Lord Henry Wotton. Hidden in the shadows of an explosive personality there is a tone both likeable and repulsive. This was not taught to Wilde from a professor or a parental relation but through the way Wilde lived his life. In a sense Oscar Wilde was his own influence for Lord Henry Wotton.

“The Picture of Dorian Gray was published in 1890. About six years earlier, Oscar had visited the studio of a painter called Basil Ward, for whom a very handsome young man was sitting; Oscar often dropped in after the first visit and kept the sitter entertained. When the portrait was finished, Wilde happened to say, ‘What a pity that such a glorious creature should every grow old’. The artist agreed, adding, ‘ How delightful it would be if he could remain exactly as he is, while the portrait aged and withered in his stead.'”(Jullian, 406) It was this which inspired the story of Dorian Gray and the character of Lord Henry was influenced by Wilde himself.

Throughout his life time Oscar Wilde had many influences for The Picture of Dorian Gray. His mothers want of a daughter instilled an effeminate attitude and a love of beauty. During college professors such as Walter Pater and John Ruskin taught him aestheticism and introduced him to Epicurus philosophies of Hellenism. Even Wilde himself was an influence for the masterpiece, The Picture of Dorian Gray, a great achievement in literature.

Oscar Wilde, by Richard Ellman, is a biography that delves into the life of a genius. It takes us from his early years as the child of Speranza on a journey through college and his discipleship to Aesthetics and Epicurus. It brings us through his adulthood and marriage, to a victory and a defeat.

In this biography I was able to glean information about Oscar Wildes college years and the influences exerted upon him by his professor especially John Ruskin.

In this biography I found ample information on the movement of aesthetics and the influence Charles Robert Maturin’s novel ‘Melmoth the Wanderer’ and the direct settings and mood Wilde transferred.

Gillespie’s readings of ambiguity within Wildes works extends all the way to its use morally in The Picture of Dorian Gray.

Hyde follows Wilde from success to Downfall in this biography that focuses on the ultimate defeat of Wilde and thew influence it has on his works.

This essay provided information on how Oscar Wilde was an influence for his own work. It related the situation which inspired the creation of The Picture of Dorian Gray.

This essay taken from a compilation done by Ellman draws Parallels between Charles Robert Maturin’s novel ‘Melmoth the Wanderer’ and The Picture of Dorian Gray.

This online sources relates the ideals of Epicurus and his Hellenistic teachings. It explains how Oscar Wilde was influence by these philosophies through a professor in college named Walter Pater.

The Influences of Oscar Wilde. (2016, Jul 05). Retrieved from http://studymoose.com/the-influences-of-oscar-wilde-essay 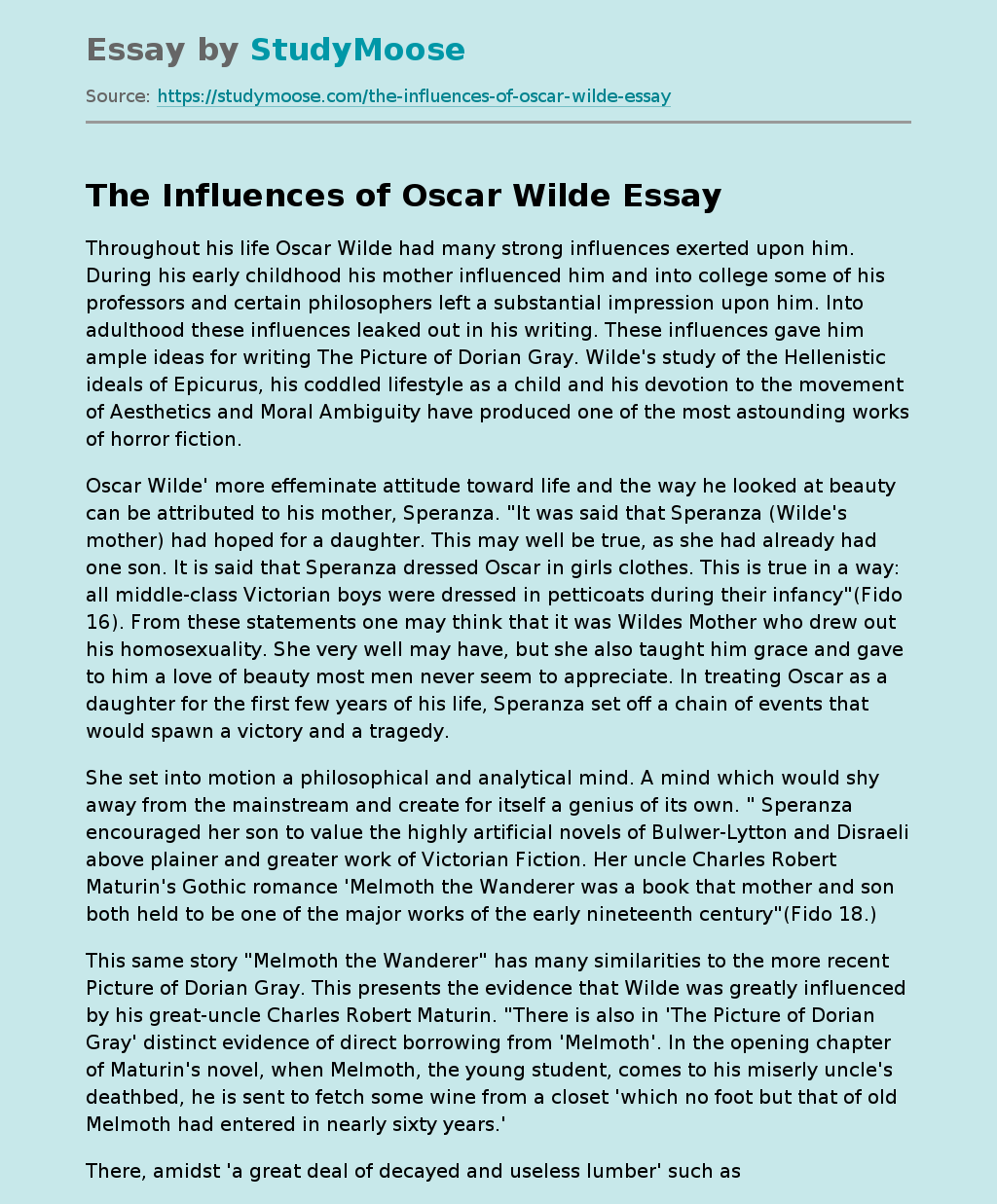