Literary Analysis and Criticism of “The Tell-Tale Heart”

Human beings have all experienced guilt, the consequence of committing a wrong, and the manipulation it has on decisions. In the short story “The Tell-Tale Heart,” author Edgar Allan Poe demonstrates the theme that guilt is strong and has the power to overcome conscience; he uses characterization, the conflict, and symbolism to communicate this message. The characterization of the narrator most clearly shows this theme. In addition to Poe’s use of characterization, his decision to show the struggle the narrator endures with himself reveals the causes of the narrator to succumb to his guilt.

Don't use plagiarized sources. Get your custom essay on
“ Literary Analysis and Criticism of “The Tell-Tale Heart” ”
Get custom paper
NEW! smart matching with writer

The use of symbolism throughout the novel draws attention to the narrator’s guilt and his insanity.

“The Tell-Tale Heart” is told by a first-person narrator who tells of a story in hope of convincing the reader of his sanity though throughout the story, he shows the strong control his guilt has over him and his mind, and ultimately proves his insanity. The narrator describes his plot to kill an old man whom the narrator didn’t hate, but who he desired to kill due to the old man’s “Evil Eye” (Poe 1).

The narrator described himself as being “never kinder to the old man than during the whole week before” he killed him (Poe 1). On the eighth night, the old man awoke to the sound of the narrator chuckling as he was in the process of entering the room.

The characterization of the narrator helps prove his madness as well as his guilt, leading to his confession. He “strongly believes in the need for making methodical and calculated decisions but is eventually overcome by inexplicable psychological forces that stem from his irrational, unstable nature” (Historical Context 1). The narrator is spiraling into folly as he recounts the story of committing the murder of an old man. He begins the story saying that he is “VERY, very dreadfully nervous I had been and am; but why will you say that I am mad?” (Poe 1). The narrator admits to being nervous while committing the murder and now in the present. He doesn’t believe himself to be a madman as he tries to convince the reader of this by describing his reasons for murdering the old man and his precise and cautious steps he took throughout the murder. He explains being extremely kind to the old man as to trick him into never suspecting the murder.

His precise plans included his slow and careful steps to enter the old man’s bedroom each night for eight nights before committing the murder without disturbing the old man in his sleep and the steps he took to conceal the corpse by accurately dismembering the body and hiding the parts under the floor board so as “that no human eye—not even his—could have detected any thing wrong” (Poe 2). The narrator’s reasons for killing the old man provide as much trivial proof of his sanity as his precautions do. The narrator “has no rational reason for wanting to kill the old man” (Chua 1). He declares to have desired to kill the old man as to rid himself of the old man’s vulture eye.

The description of the old man’s eye as that of a vulture is the narrator’s attempt to defend his actions by comparing himself to a vulnerable being defenseless to an unsightly scavenger. The narrator claims, “Object there was none. Passion there was none. I loved the old man. He had never wronged me. He had never given me insult. For his gold I had no desire. I think it was his eye!” (Poe 1). The narrator declares love for the old man whom he brutally murdered and dismembered, chuckling at his cleverness in doing so. In an effort to divide the person of the old man from the old man’s allegedly evil eye, which prompts the narrator’s hatred, the narrator discloses his insanity.

This delusional partition allows the narrator to be oblivious to the irony of claiming to have loved his victim. The first-person narration of the story helps reveal the narrator’s mental illness to the reader. “The particular standpoint from which the ‘Tell-Tale Heart’ is told provides the reader with insight into the major character’s motivation in carrying out the murder and in telling us about it” (Moore 1). The narrator speaks of “mortal terror” that the narrator says many nights at midnight “has welled up from my own bosom, deepening, with its dreadful echo, the terrors that distracted me” (Poe 1). “The reason for the crime lies exclusively in the narrator’s disturbed mind” (Moore 1). The narrator’s explanation of the murder reveals that he heard the beating of a heart, what he believed to be the old man’s heart.

This beating heart twice caused him to act irrationally during the story as his actions were in hope of stopping the sound of the beating heart: it caused the narrator to finally commit the murder and it caused him to confess to the police. This shows his guilt he feels for killing the innocent old man as he confesses to the murder though he had clearly gotten away with it, as did his nervousness that he conveys that he is overcome with throughout the story. The conflict of the story helps to reveal the strong prevalence of guilt experienced by the narrator. The main conflict of the story is an inner conflict, character vs. himself, as the narrator struggles with his own disturbed mind. The narrator, after deciding to murder the old man due to his vulture eye, experiences the forceful sound of a heart beat.

His struggles with himself cause him to kill the old man whom he loved. The narrator in the beginning of the story confesses to the reader that he suffers from a “disease” that apparently “sharpened” his senses, specifically his sense of hearing acute (Poe 1), in an attempt to rationally explain why he believed he heard the old man’s heart beating. The narrator attempts to fight his conscience while experiencing this sound, specifically when he tries not to confess the murder to the police and reveal the secret location of the corpse.

The murder of the innocent old man causes the narrator to feel guilt such that he ends up confessing the deed in the end. A minor conflict is the conflict of the narrator vs. the eye which causes him to commit the deed in the first place. The vulture-like eye gives the narrator’s blood chills and vexed him so that he had to be rid of it. The narrator acts as a helpless creature to the powers of the eye. The narrator, in hatred of the eye, thus conceived the plan to murder the old man so he would never again be disturbed by the eye. Symbolism is ever so dominant in “The Tell-Tale Heart.” The most apparent symbol in the short story is the sound of the beating heart. The narrator believes the sound is the old man’s beating heart brought on by his nervousness on the eighth night and heard by the narrator due to his “disease.” The sound of the beating heart represents the guilt and remorse the narrator feels for committing the deed as it causes him to confess the deed to the police.

The narrator’s growing agitation to the intensifying sound causes him to confess as he can no longer bear the sound, revealing his guilt. The narrator had clearly gotten away without suspicion of the police with the deed, but in the end, he was his own worst enemy as he admitted himself as the murderer. Another obvious symbol is the vulture eye of the old man. The narrator possesses the idea that an old man is staring at him with the Evil Eye and placing a curse on him as he gets chills in his blood. The narrator also obsesses over the eye as he desires to separate it from the old man as to spare the man from his aggressive response to the eye. The narrator reveals his incapability to distinguish that the “eye” is the “I,” or identity, of the old man (Chua 1). The eyes represent the spirit of human identity, which can’t be alienated from the body. The eye can’t be destroyed without bringing about the old man’s death.

On the eighth night, the ray of light from the lantern reveals the Evil Eye, which is the narrator’s enemy, and sets off the narrator’s delusional hatred for the vulture eye, making him able to kill the old man. The theme of the story is that guilt is a powerful emotion that can cause one to succumb to their guilt, in this case, the narrator. All the carefully planned elements of the story work to create an overall unity, from the narrator’s denial of his insanity to his confession, the delusional conflict of the narrator, and the abundance of symbolism throughout the story. The heart symbolizes the narrator’s guilt and causes him to confess to the police. Even when no one knows one committed a bad deed, that person themselves knows of the deed, so they will have to live with the guilt and the consequences of their actions, or succumb to their guilt and confess.

Literary Analysis and Criticism of “The Tell-Tale Heart”. (2017, Jan 11). Retrieved from https://studymoose.com/literary-analysis-and-criticism-of-the-tell-tale-heart-essay 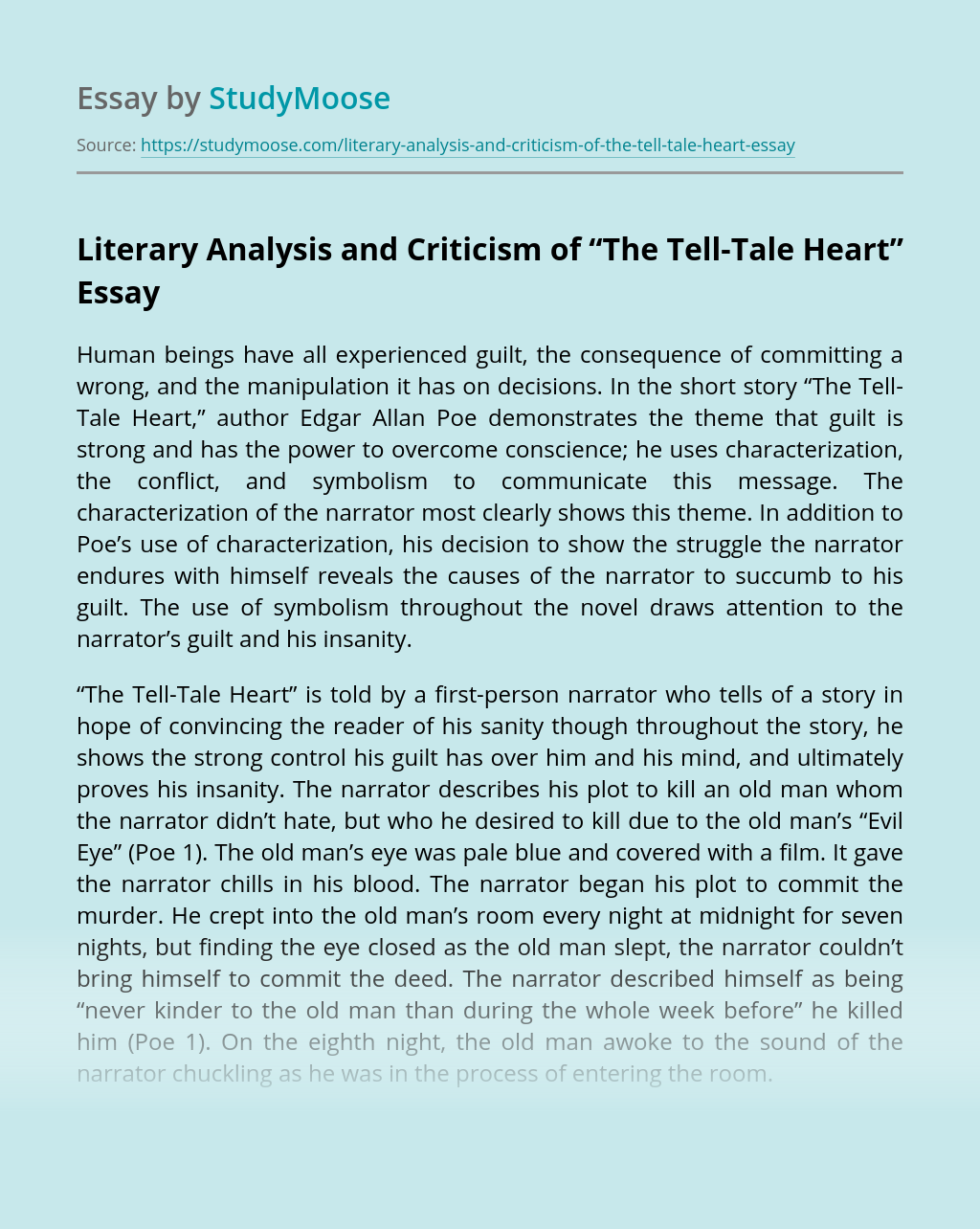