In “The Tell-Tale Heart,” Edgar Allan Poe revolves the story around a raving individual and the object in which he obsesses over. This theme of insanity is progressed throughout the entire story by Poe’s style of gothic writing. Gothic-style writing is defined by using these elements: abnormal psychological behavior, creating a gloomy or threatening atmosphere, connections between the setting and its characters’ thought processes or behavior, and supernatural components. Poe’s usage of these gothic elements builds up the central theme in the “The Tell-Tale Heart.

Don't use plagiarized sources. Get your custom essay on
“ Gothic Themes in Edgar Allen Poe’s “the tell-tale Heart” ”
Get custom paper
NEW! smart matching with writer

Poe’s major element of gothic literature, which establishes the main theme of insanity, is the use of abnormal psychological behavior. The narrator proves his insanity at the very beginning by ranting about his nervousness and states his fear that the reader will assume he is mad, “How, then, am I mad? Hearken! And observe how healthily–how calmly I can tell you the whole story,” (The Gold-Bug and other tales*, pg. 74). The mere fact that he is afraid of being thought of as a madman does not prove that his psyche is abnormal.

Poe manifests the narrator’s insanity by having him state that his preconceived murder has no purpose, “It haunted me day and night. Object there was none. Passion there was none,” (GB, pg. 74). The reader can see the narrator’s madness again after he divulges his plan to the reader, stating, “Ha!–would a madman have been so wise as this?” (GB, pg. 74). Eventually the narrator’s mind gets the best of him and he kills the old man, but afterwards, his attitude is down right odd and sadistic, “In an instant I dragged him to the floor, and pulled the heavy bed over him.

I smiled gaily, to find the deed so far done,” (GB, pg. 76). By having the narrator smile after killing the old man, Poe creates a picture of a raving lunatic in the readers’ mind. As the plot heightens, so does the narrator’s dementia. Police officers arrive at the narrator’s home shortly after he has finished disposing of the body. Feeling supercilious, the narrator invites them in to chat; sitting directly over the old man’s dismembered body. Hearing what he thinks to be the old man’s heartbeat, the narrator’s nervousness grows while he is chatting with the police officers. Poe, once again, show’s us the narrator’s insanity through his resulting actions, “I foamed–I raved–I swore! I swung my chair upon which I had been sitting, and grated it upon the boards,” (GB, pg. 77). The reader can really see the climax of the narrator’s abnormal psyche when he actually thinks that the police officers can hear the beating heart too, “They heard!–they suspected!–they knew!–they were making a mockery of my horror!” (GB, pg. 78).

In “The Tell-Tale Heart” Poe creates this kind of dismal and frightening atmosphere that is traditional to gothic style writing. By choosing dark or depressing words, Poe creates a dreary mood for the reader. This mood then reflects upon the characters’ thinking in the story. The narrator describes the old man’s eye, his fixation throughout Poe’s story, “One of his eyes resembled that of a vulture–a pale blue eye, with a film over it. Whenever it fell upon me, my blood ran cold,” (GB, pg. 74). The vulture is a creature of death, and by using this animal instead of another, Poe creates the sense of true evil, not just any old, ugly eye. The word pale gives the eye a quality of dullness or lifelessness, both of which have negative connotations; the film over the eye makes it repulsive to the reader, adding to the full effect of how grotesque this eye really was to the narrator. The reader can perceive from the mood that Poe creates in the story, what is going on in the mind of the narrator.

The way that Poe has the narrator describe this eye shows the absolute hatred that he feels towards this eye. It gives the reader insight as to why the narrator is plotting this horrible murder. Each night, the narrator explains, how he goes into the old man’s room, describing it as “black as pitch with the thick darkness,” (GB, pg. 75). Poe writes the story so that the entire plot occurs at night, during this ‘thick darkness’, making the narrator’s motives even more frightening. The atmosphere surrounding the narrator also reflects upon his emotions. He is about to commit murder, and action full of darkness and hatred, and Poe places the story in a dark, frightening setting instead of during the day or in the light of the narrator’s lantern. This feeling of fright is again created for the reader, by Poe, when the narrator goes into the old man’s room, startling him, “And it was the mournful influence of the unperceived shadow that caused him to feel–although he neither saw nor heard–to feel the presence of my head within the room,” (GB, pg. 76).

Emptiness and a mechanical like quality set the tone for when the narrator speaks of the old man being dead and what he did with the dead remains, “he was stone, stone dead…First of all I dismembered the corpse. I cut off the head and the arms and legs,” (GB, pg. 76). That quote alone is enough to frighten any reader, and that is exactly what Poe is aiming for by using this particular gothic writing technique. The reader can again see into the mind of the narrator. He is devoid of feeling for this old man, stating that the old man is ‘stone dead’; further more, he meticulously explains the steps of ridding himself of the body after murdering the old man.

Poe’s last gothic writing technique to enhance the theme of insanity is the use of supernatural components throughout the story. By having the eye torment the narrator until he viciously murders the old man, Poe is bringing a supernatural aspect into “The Tell-Tale Heart.” The narrator’s hatred for the old man’s eye is unexplainable, and the narrator himself does not even know why he came up with the idea, “It is impossible to say how first the idea entered my brain,” (GB, pg. 74). This eye almost possesses the narrator, becoming the driving force of his insanity. Another aspect of the supernatural at work in Poe’s story is when the narrator hears the beating of the old man’s heart in his own ears. It’s obviously impossible to hear the beating in the intensity at which the narrator describes it, “the sound would be heard by a neighbor,” (GB, pg. 76), but Poe adds this sentence to enhance the story’s supernatural aspect. Right after the narrator killed the old man, he could still hear the heart beating, again this feat is impossible, “for many minutes, the heart beat on with a muffled sound,” (GB, pg. 76).

Even after the beating stopped, according to the narrator, it began again, once the police arrived. Poe makes it clear that the beating heart is not just the narrator listening to his own heart, or imagining the sound in his head, “until, at length, I found that the noise was not within my ears,” (GB, pg. 77). An unexplainable noise that grows louder and louder can only be the work of the supernatural. For the narrator even believes that the police officers can hear the beating too, and are making a mockery of his horror. Poe cleverly intertwined this idea of the supernatural, a gothic writing element, to intensify the lunacy of his main character.

Throughout his short stories and poems, Poe uses the technique of gothic writing. In “The Tell-Tale Heart” Poe contributes to his main theme by directly using certain gothic writing elements. More specifically, Poe uses the supernatural, gives his character an aberrant psyche, and creates a murky and chilling atmosphere that also directly correlates with the characters behavior and thinking.

Paragraphs need to be broken up more. A little wordy

all quotations are taken directly from “the tell-tale Heart”

This is an analysis of Poe’s story and his use of gothic theme writing. 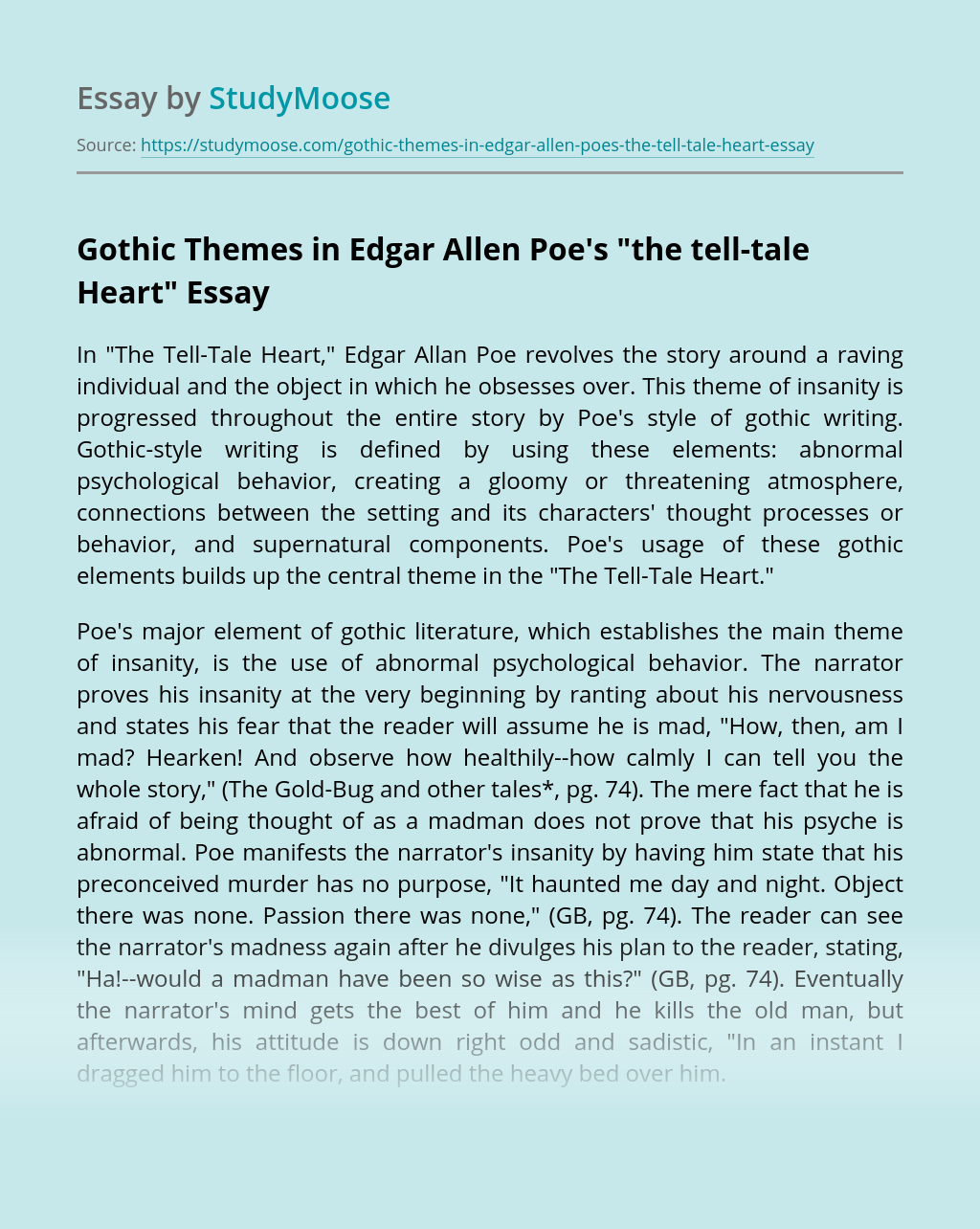