The word “gothic” evokes feelings of doom, depression, death and decay. It suggests old extravagant cathedrals and falling down buildings. “Gothic” also suggests doomed relationships and lost loved ones. Gothic literature is meant to scare readers as well as to remind readers of their own darkness, of the darkness that they are capable of being. In the gothic poem ‘The Raven,’ Edgar Allen Poe uses symbols and allusions to other works of literature to create a poem that describes the madness man can develop at the loss of a loved one.

Turn in your highest-quality paper
Get a qualified writer to help you with
“ Symbols and Allegory in Edgar Allen Poe’s ‘The Raven’ ”
Get high-quality paper
NEW! AI matching with writer

Great poems come from great authors, most of whom have interesting stories. One of the greatest poets in American literature was Edgar Allen Poe. To best understand his works, especially his poem “The Raven,” it is important to know about his life. According to Terry Heller, Edgar Poe was born on January 19, 1809 in Boston, Massachusetts to David and Eliza Poe, both traveling actors. Poe’s early life was full of tragic events.

His father disappeared when he was three years old and his mother dies less than a year later. A foster family, the Allen’s, from whom he claimed his middle name, then raised Poe. After briefly attending the University of Virginia, Poe joined the army.

After leaving the army, he wrote for various magazines, during which time some of his most well-known stories were written. In 1936 Poe married Virginia Clemm, who was only fourteen years old at the time. Virginia passed away shortly after their marriage due to complications of tuberculosis.

After Virginia’s death, Poe became depressed and turned to drugs and alcohol for comfort. These, however, did not help Poe deal with the pain; he attempted suicide in 1848 and eventually died in October, 1849. Throughout all of his writing, Poe drew from tragic events in his life to create some of the most well known poems of all time (Heller).

Gothic literature is characterized by an emphasis on the grotesque, mysterious, and desolate. Poe’s “The Raven” is considered one of the best examples of gothic poetry in existence due to eerie, supernatural elements and tone of doom and decay. “The Raven” is about sadness, loss of hope, and the death of a loved one. Poe uses symbols and allegory to create an overall dark and weary scene where a young man encounters a raven in his chamber. The raven enters the room very much like royalty would, but only speaks one word – “nevermore.” At first, the speaker receives the bird as a novelty, as a funny creature who just so happens to be in his presence. Upon speaking to the raven, however, the man becomes increasingly upset and eventually drives him to madness.

Poe uses symbolism to describe the extreme grief that the speaker feels due to the loss of Lenore. Lenore is not only obsession of the speaker, she serves as a major symbol of loss in this poem. Upon first introduction to Lenore, the reader learns that she is lost, “Vainly I had sought to borrow…sorrow for the lost Lenore (Behme). Soon after, her name is whispered by both the speaker and the wind, symbolizing that, for the speaker, Lenore is everywhere. The poem reiterates this by stating “This I whispered, and an echo murmured back the word, ‘Lenore! – Merely this and nothing more.” By saying “merely this and nothing more,” the speaker admits that his whole life is about Lenore and nothing more. In fact, the speaker’s mind keeps wandering back to Lenore, remembering how she used to sit in the chair and look at the curtains. When speaking to the raven, it is the questions that deal with Lenore that drive the speaker mad.

The most prevalent symbol in this poem is the raven. The raven represents the speaker’s mental instability and madness. Although the raven does not actually show up until line 39 of the poem, Poe decided to title the poem ‘The Raven.” Perhaps this was to draw the reader’s attention to the importance of the raven to the poem. When the raven first appears, the speaker compares it to royalty walking into a room, “In there stepped a stately Raven of the saintly days of yore…but with the mien of lord or lady, perched above my chamber door” (Behme). Then there is the line that the raven repeats over and over again, “nevermore.” The raven could repeat this word simply because it is the only word that he knows. However, because the raven decided to perch on the bust of Pallas, otherwise known as Athena the Greek Goddess of wisdom, it could be speaking from knowledge.

Along with symbols, Poe used allusions to create an atmosphere of gloom. Within the first few lines of the poem, Poe foreshadows that the poem is full of literary references by stating first “…while I pondered, weak and weary / over many a quaint and curious volume of forgotten lore,” and then a few lines later, “vainly I had sought to borrow / from my books surcease of sorrow” (Behme). The speaker in the poem finds solace in books and would be comfortable alluding to many different works. Poe alludes to several different myths, including the before mentioned bust of Pallas, which is an allusion to the Greek goddess Athena.

This reference could show that the raven is more intelligent than the reader realizes, or it could refer to the intelligence of the speaker. Poe also refers to Pluto, the Roman god of the underworld, “Ghastly grim and ancient Raven wandering from the Nightly shore – / Tell me what they lordly name is on the Night’s Plutonian shore!” (Behme). This reference reiterates the speaker’s focus on Lenore’s death by mentioning Pluto and his relationship to the underworld. Poe also alludes to the biblical balm of Gilead, “- tell me – tell me, I implore! / Is there – is there balm in Gilead? – tell me – tell me, I implore!” (Behme) Gilead is located between the Sea of Galilee and The Dead Sea. The evergreen trees that grow there produce medical resins that aid in healing.

Edgar Allen Poe wrote the poem “The Raven” in an attempt to cope with the death of his young wife. The symbols in the poem, including the woman Lenore and the raven are examples of how the thoughts of dead loved ones are ever present and can haunt the living that were left behind. The speaker’s lost loved one, Lenore, seems to be ever present in the poem; the wind evens carries the whisper of her name. The loss and remembrance of Lenore has driven the speaker to madness, evidenced by the talking raven sitting in his room. The allusions in “The Raven” reinforce the doom in the poem as well as remind the reader that stories are never solitary, but instead are common, even among different times and cultures.

Symbols and Allegory in Edgar Allen Poe’s ‘The Raven’. (2016, Aug 15). Retrieved from https://studymoose.com/symbols-and-allegory-in-edgar-allen-poes-the-raven-essay 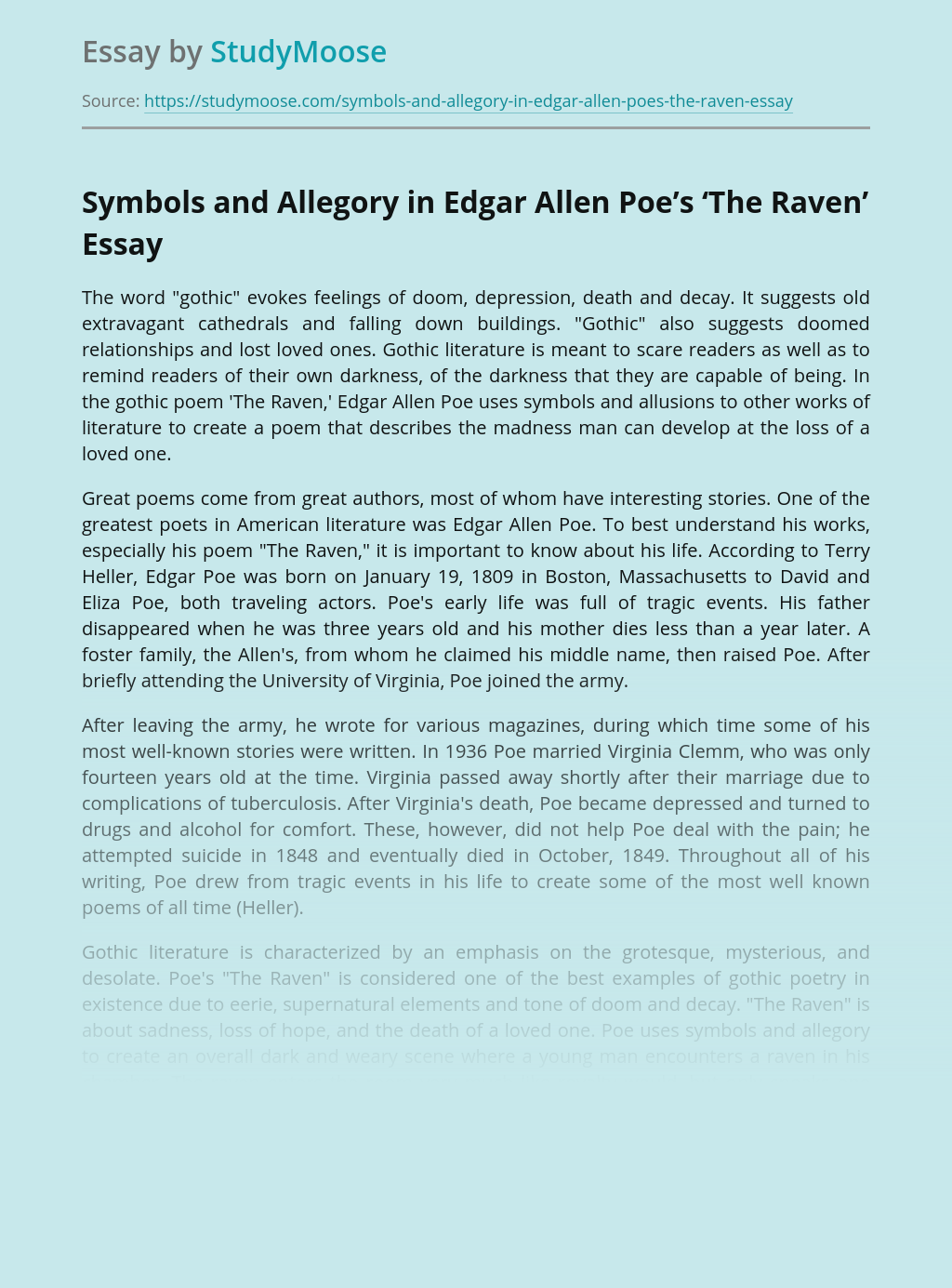 Turn in your highest-quality paper
Get a qualified writer to help you with
“ Symbols and Allegory in Edgar Allen Poe’s ‘The Raven’ ”
Get high-quality paper
Helping students since 2015
Stay Safe, Stay Original