'The Black Cat', 'The Cask Of Amontillado' and 'The Tell-Tale Heart' by Edgar Allan Poe

Edgar Allan Poe was an American poet born in 1809 and dies in 1849 and was something of a mystery. He wrote countless stories of mystery and imagination and seems to be a very morbid writer.

The first of the apparent similarities between the three short stories is that they are all written in first person narrative, indicating that the narrators are deeply involved in the stories they tell.

Don't use plagiarized sources. Get your custom essay on
“ ‘The Black Cat’, ‘The Cask Of Amontillado’ and ‘The Tell-Tale Heart’ by Edgar Allan Poe ”
Get custom paper
NEW! smart matching with writer

In all three of the stories a murder is present and the narrators are the murderers.

A major difference between the three stories is the style of the murders; the murder in ‘The Black Cat’ was one of passion unplanned and very careless, the murderer in this story was not as prepared or clever as the other two murderers who were able to prepare thoroughly. Although only the murderer in ‘The Cask Of Amontillado’ was calm and smart enough to get away with his crime.

The narrator in ‘The Black Cat’ seems honest and reliable qualities, which the other two do not seem to posses. However the three murderers share a common quality of guilt.

With the exception of ‘The Cask Of Amontillado’ the victims were people who were close or compassionate towards their murderer.

The victims in ‘The Black Cat’ differ from the other victims in several ways, it is an animal victim and it is believed to have supernatural qualities. The second victim 9his wife is also the only female character in the three stories.

There also seems to be a pattern of police presence three for one victim in ‘The Tell-Tale Heart’ and six for two victims in ‘The Black Cat’.

There is also a harsh contrast between the uses of alcohol use in the two stories ‘The Black Cat’ and ‘The Cask Of Amontillado’ in the latter alcohol is used to lure and intoxicate the victim so he is weakened but in ‘The Black Cat’ alcohol consumes the narrators reason and unleashes the perverseness of human nature allowing him to attack his victim unfeelingly and without guilt until after the deed has been done.

However in the ‘The Tell-Tale Heart’ there is no mention of alcohol.

The three stories all share a serious tone however ‘The Black Cat’ and ‘The Tell-Tale Heart’ are very straightforward and also sinister whereas ‘The Cask Of Amontillado’ is a very precise to the point account.

The three stories share a mixture of moods but they are based upon three basic emotions anger fear and paranoia.

Only one of the stories has a given motive and that is ‘The Cask Of Amontillado’ the motive given is revenge, the victim a drunken wine expert it was planned and carried out very well, the murderer was not caught.

However although this was the only murder with a motive it was not the only planned murder, in fact the only spontaneous murder was in the ‘The Black Cat’ this was also the only story with a multiple killing.

The three stories have undoubtedly got several similarities but they also have several important differences. I have come to the conclusions that although the basic principles of the stories are the same the finishing touches, which make the story, are not.

'The Black Cat', 'The Cask Of Amontillado' and 'The Tell-Tale Heart' by Edgar Allan Poe. (2017, Oct 16). Retrieved from https://studymoose.com/the-black-cat-the-cask-of-amontillado-and-the-tell-tale-heart-by-edgar-allan-poe-essay 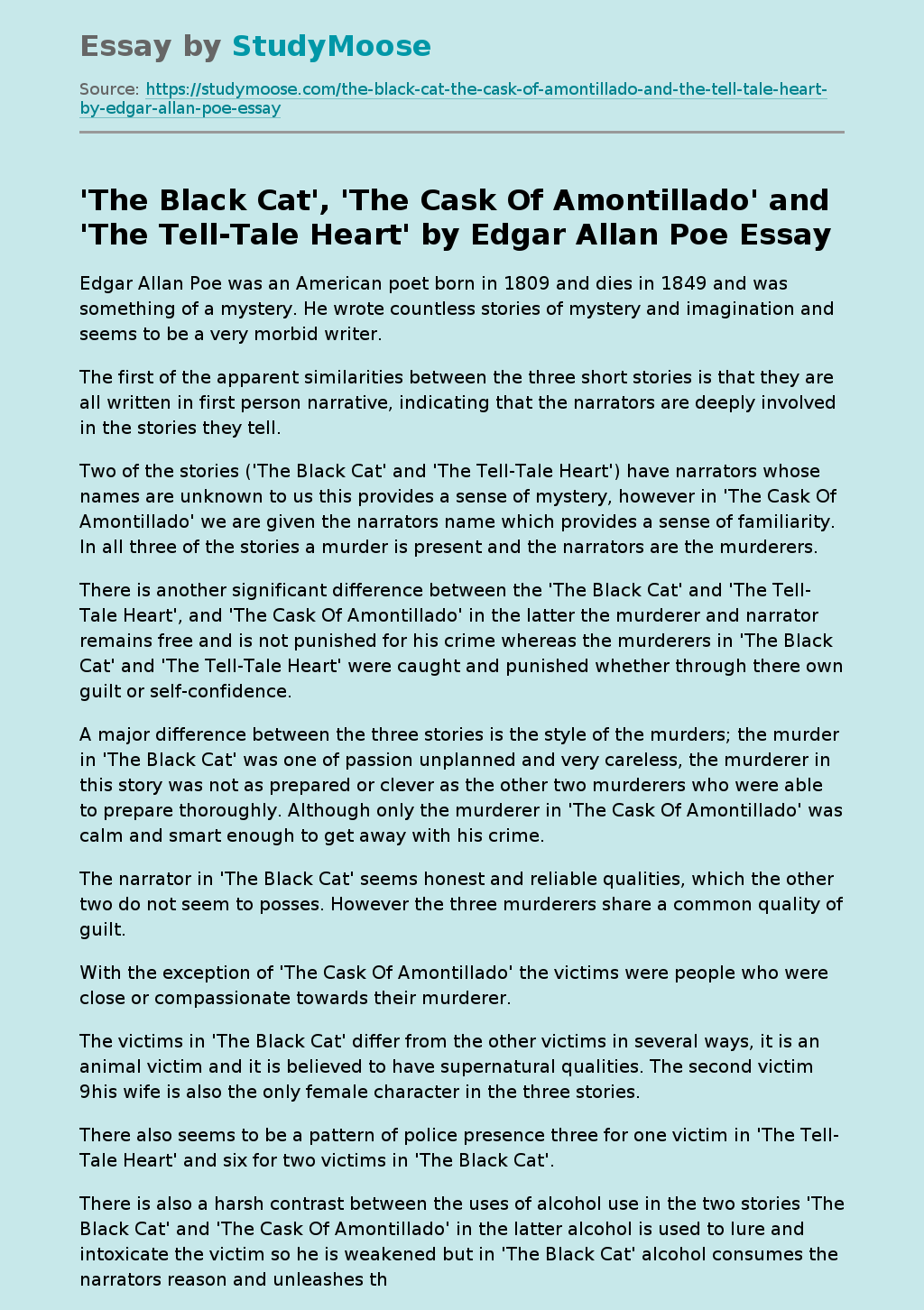