Edgar Allan Poe and Nathaniel Hawthorne were two of America’s finest Romantic writers. These two writers have stood the test of time and are read as much today if not more than they were in their own time. The major reason that both author’s were as popular as they are is because of the fact that they delved into the human mind to create their psychological literature. Edgar Allan Poe’s life spanned from eighteen nine until nineteen forty-nine, the years that were the beginning of the Romantic Movement.

Don't use plagiarized sources. Get your custom essay on
“ Edgar Allan Poe and Nathaniel Hawthorne: a Comparison ”
Get custom paper
NEW! smart matching with writer

Poe was considered an educated man for his time. He attended the University of Virginia and West Point.

Since West Point is a military school, he no doubt studied psychology because one who would be a commander in the army would need to know about the way the enemy thinks. Poe did not use this knowledge as a military officer, but used it to create excellent psychological terror in literature.

During a time when the arts focused on the supernatural, Poe looked to the character’s own mind to provide terror. The narrator of The Tell-Tale Heart is so terrified by his guilt that he reveals the murder he has committed to the authorities, as does the narrator of The Black Cat.

In the famous short story The Cask of Amontillado, the reader experienced the terror of one’s condemnation to be walled up in a small cellar room to die and to have the time to think about what is to happen in total darkness and isolation.

The Fall of the House of Usher also leaves the narrator completely terrified, not because of his safety, but because of the information that his mind must process and the knowledge that he may begin to suffer from the same madness that Roderick Usher is doomed to endure.

Nathaniel Hawthorne was also an expert in delving into the deepest regions of a character’s mind. The Scarlet Letter, one of Hawthorne’s best works is about a woman who must wear a scarlet A because she is an adulterer. The town minister is the man who is also responsible for the sin. However, because he is a male and cannot get pregnant, the community does not know of his guilt. Instead he punishes himself much more than his female counterpart until the sin takes on a supernatural quality. It does so only through the guilt that he must endure.

The Minister’s Black Veil is about another minister who physically punishes himself for a psychological sin that he has committed. This penance has bothered the congregation to the point that they isolate the minister. Again, it is their psychological fear and guilt that is their terror. Hawthorne, in his attempt to prove that all are sinners and that all wrestle with good and evil in their minds, proves his point in Young Goodman Brown. In this short story, a young man must decide whether to sell his soul to become a successful man or to remain free.

The resolution of the story is that the horrid scene the young man had witness the night before was only a dream, yet he is not sure that it took place in his mind or if it was real. Reality and what one perceived as reality was something that Hawthorne was a master. Both Edgar Allan Poe and Nathaniel Hawthorne made use of the human mind as an instrument a person’s demise rather than actions. They understood the power of the human mind even though they did not know what we do today. They are shining examples of psychological literature as an instrument of terror and guilt. 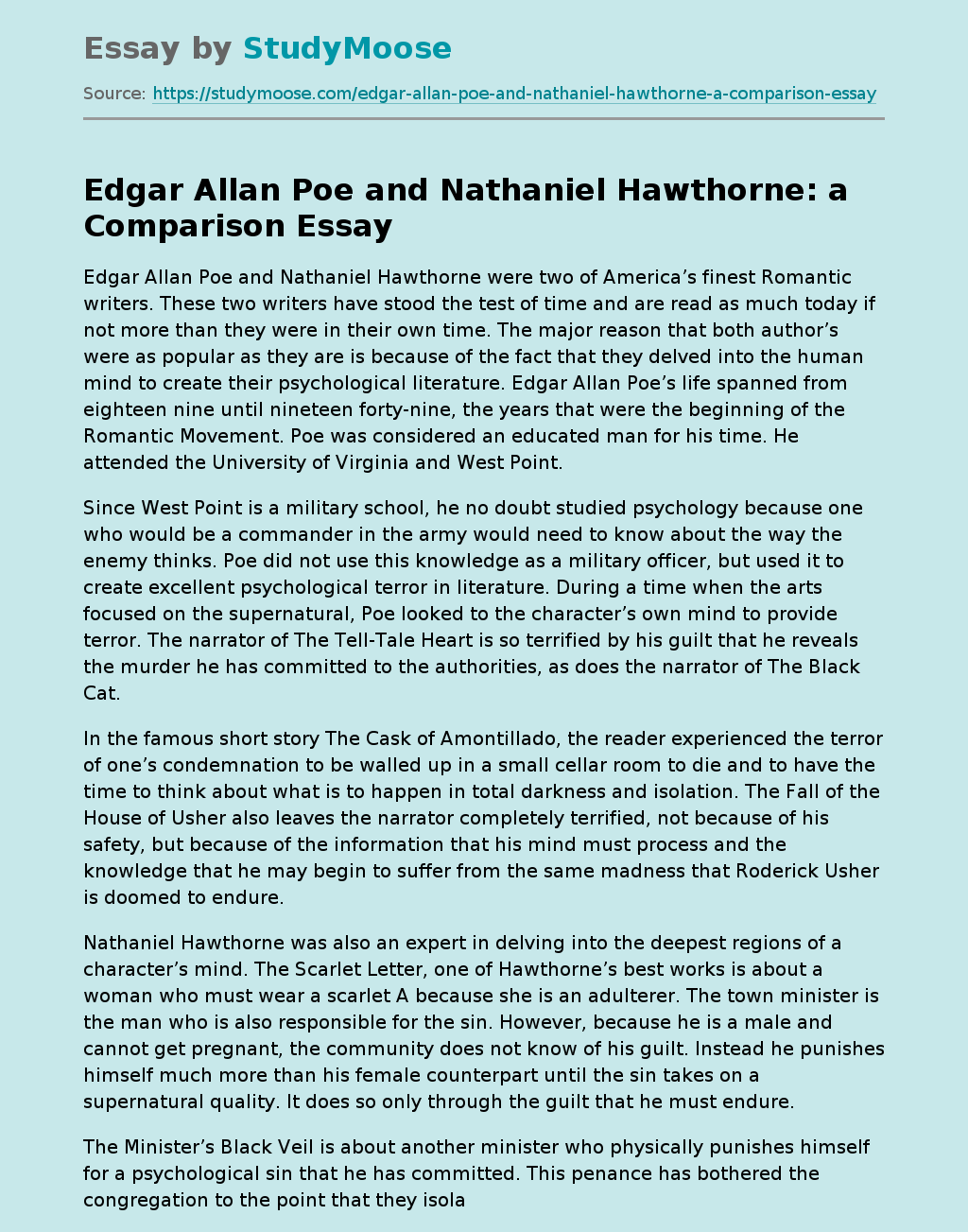