Analysis of the Black Cat

“I neither expect nor solicit belief” explains that the narrator does not expect the reader to believe the story they’re about to read, because he finds it unbelievable himself which is evidenced by the excerpt “Mad indeed would I be to expect it, in a case where my very senses reject their own evidence. ” With that being said the single effect of the story is alcohol induced insanity. The Black Cat” is a tale that deals with the ups, downs, and delusions of alcohol.

Don't use plagiarized sources. Get your custom essay on
“ Analysis of the Black Cat ”
Get custom paper
NEW! smart matching with writer

The story is told in first person so the reader will get an intimate sense of the writer’s thoughts and feelings. The narrator at first appears to love his wife and pets, however by the end of the tale the narrator is delusional and despises his once beloved pet and its replacement. His alcoholism leads to madness and he hangs the first cat. This is succeeded by his house burning to the ground and his entire world of wealth with it.

The narrator then “resigns himself henceforward to despair” this phrase shows him falling deeper into alcoholism and insanity. The narrator’s decent into insanity is further evident by the phrase, “when I first beheld this apparition- for I could scarcely regard it as less- my wonder and my terrors were extreme. ” He continues for months that the phantasm of the cat haunted him. He then finds the second cat which is seemingly related to his alcoholism as he finds him among one of the taverns frequently visited for the purpose of intoxication.

He soon finds aversion for the cat.

The narrator then speaks of how he feels the cat is out to get him, as shown by the statement, “I am almost ashamed to own that the terror and horror with which the animal inspired me, had been heightened by one of the merest chimeras it would be possible to conceive” The narrator story continues with him and his wife walking into the cellar. He feels the cat tried to trip him down the stairs and enraged he swings an axe at the cat in which his wife blocks. The narrator then writes “Goaded by the interference into a rage more than demonical, I withdrew my arm from her grasp and buried the axe in her brain. This shows his level of insanity increasing into murderous rage. He then sets forth without remorse to cover up the murder of his wife. The narrator’s insanity doesn’t take away from his intelligence. As G. K. Chesterton quoted “A madman is not someone who has lost his reason but someone who has lost everything but his reason” (www. goodreads. com/qoutes). The narrator has thus shown that he is insane but also calculating. He also shows very little guilt over the murder of his wife which is witnessed by the excerpt “The guilt of my dark deed disturbed me very little. The narrator is instead feeling enlightened at this point in the story because his tormenter, the cat, is not around. Satisfied that he would not be caught; when the police did a search of his home he felt it necessary to gloat about the sturdiness of the home and tap his cane against the very wall with which he had imprisoned his wife’s dead body, he pens “No sooner had the reverberation of my blows sunk into silence, than when I was answered by a voice from within the tomb. ” This second cat in the end provides justice when it reveals the hiding place of his murdered wife with its cry.

This story has many elements that contribute to the single effect of alcohol induced insanity. The strongest element is character development. As previously stated, the narrator begins his tale as a seemingly normal man and as his alcoholism gets worse so does his decent into insanity. The character develops slowly over the course of the story thus making his decent into madness more believable. He creates the climb into insanity by centering his anger on the cat due to the irritation that arises within him from his alcoholism.

He further exasperates the conflict between him and the cat by inflicting violence upon the brute and blaming it upon the spirit of perverseness. The character has now developed from the ostensibly normal person in the introduction to a drunken insane violent man. He continues with the characters madness but takes it further by the instant rage they caused him to murder his wife. The character then realizes the need to think clearly, intelligently and concedes to concealing his wife in the cellar wall, like the monks of the Middle Ages did their victims.

The center of his insanity it would seem has disappeared with the murdering of his wife and the narrator perceives himself as no longer insane cause his tormentor has let him be. Then comes the search for his wife by the authorities and the narrator feeling good about his current disposition brags in little detail about his heinous deeds and is thrust back into madness instantly with the shrieking of his tormenting beast. The single effect of this short story is alcohol induced insanity. The narrator tells the story of how he once was sane and lucid and then began his descent into insanity because of alcoholism. The short story shows the effects alcohol could have on anyone person when drinking excessively. The effects of alcohol have been well documented throughout time and can affect each individual in a unique way, causing happiness in some and insanity in others.

Analysis of the Black Cat. (2018, Nov 05). Retrieved from https://studymoose.com/analysis-of-the-black-cat-essay 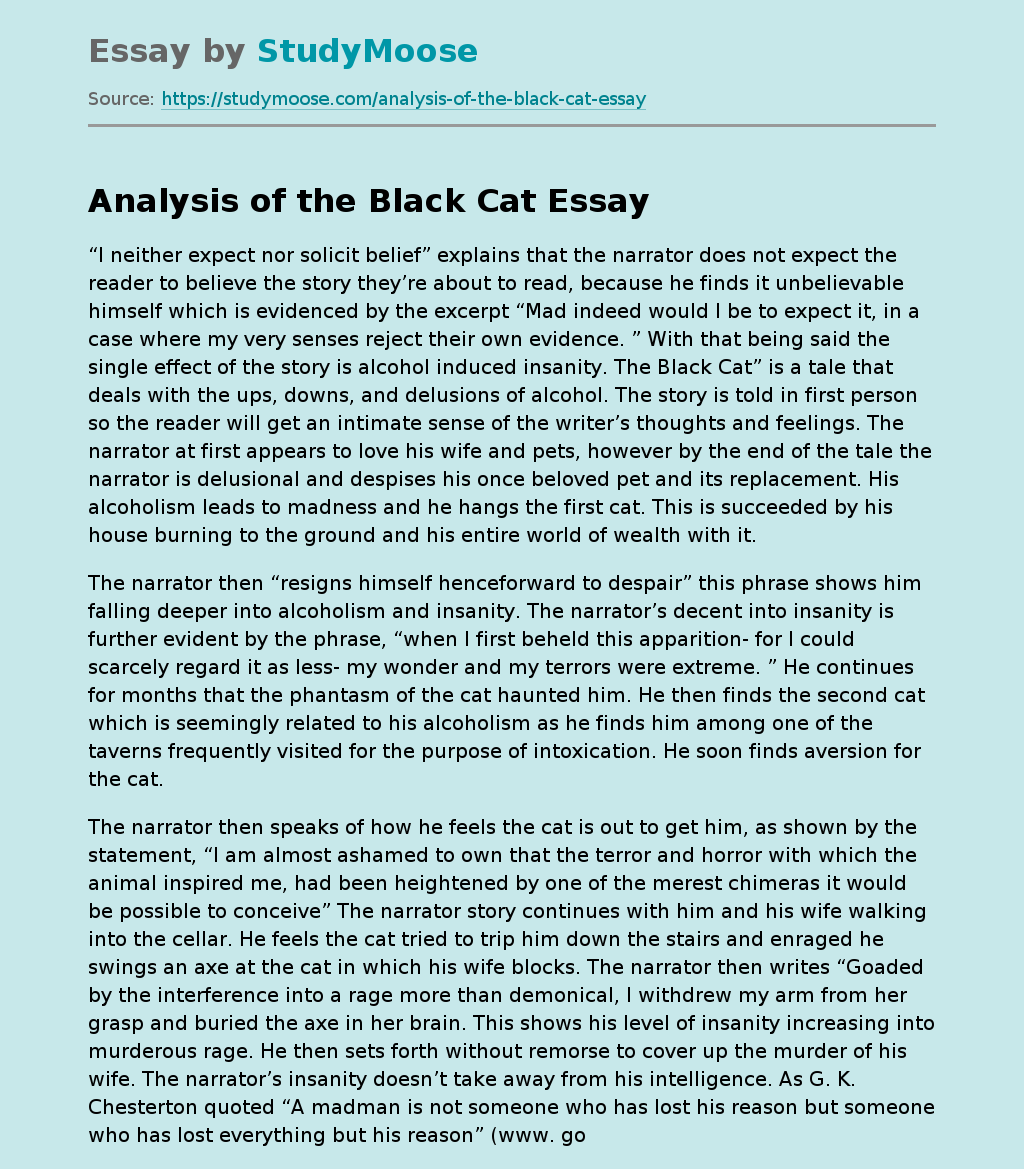