The “Tell Tale Heart” is a well known short story that was written by Edgar Allan Poe. This story is one of the many examples that displays his writings of death and misery as most of his stories are about. The main characters of the story include the narrator, and the old man, both who are never presented a name. In this story, the narrator murders this old man in his sleep over the presence that the old man’s ‘Evil Eye’ brings.

This essay discusses whether the narrator had motives for carrying out the murder or not and takes a look at the background state of the author to have a comprehension of his style of writing.

Edgar Allan Poe was born in Boston, Massachusetts in 1809. Poe did not know his parents well, and his mother passed away from tuberculosis when he was only three years old. His father left his family and eventually passed away shortly after, forcing Poe to stay with his foster parents that adopted him.

Edgar married his cousin, Virginia, at the age of thirteen. She was the love of his life, and who he wrote about the most;however, she unfortunately died at twenty-four years old. Poe did not only have to experience losing his loved ones, but he was also forced to be away from them while they were still alive, which led to him to heartbreak. These experiences led to him attempting to find comfort in alcohol, as if it were his only way to find relief other than writing.

Edgar was in severe depression in his early years, which almost literally “spilled off on to the page”, hence the dark vibes of his writings.

The majority of Poe’s writings center around characters whose reliability is highly questionable, and that are mentally troubled in some type of way. Many of Poe’s characters struggled in the same way that he struggled in his own life.Unlike many authors who write about non-existing monsters, Poe’s stories provoked terror in the human mind because their subject is the horror of the mind. Many authors of this genre write stories that the audience can step away from the monsters without being psychologically terrorized later. However, many readers of Poe’s writings cannot as easily put down the images established in their mind because the horror in their mind is ever present. A relationship exists between Poe’s writings and the world that surrounded him. Although not all of Poe’s characters and their world were not meant to represent his, his work was still under a limit to what he knew, which was mostly sadness.

In Poe’s short story, “Tell Tale Heart” the narrator who is unnamed insists his sanity before and after the murder that he completed. “Can you not see that I have full control of my mind? Is it not clear that I am not mad?” (Poe 64). Many insane people try to express to others or themselves that they are not insane to help calm themselves down letting anyone know that they are in fact, insane. Right off the bat, this story is already telling you that the narrator is out of his or her mind, giving you an understanding of why they say the things they do, or commit the actions that they do. These thoughts could be argued as unconscious behaviors through his own insanity. In the beginning of the story, the narrator explains to the audience why he killed the man. He/she states that the reason he killed the man was because of his ‘evil eye’ that brought him fear. Justifying murder is almost impossible, but it is a bit more understanding when a person has been driven crazy to the extremes. However, their stated motive for murdering an innocent man does not even match up to something as little as a financial gain. They even have to convince themself that this was their motive: “I think it was his eye!”(64). You could only imagine the face of a detective today after hearing that he thinks he killed an innocent man because of his eye. This alone clearly shows that the narrator has an unhinged mind and killed for no legitimate reason.

While waiting to kill the man, the narrator starts to hear the man’s heartbeat until it gets too strong for him. The narrator can not take it any longer, so he decides to strangle the man right then and there. When he kills him, the narrator states that he was ‘dead as stone’; however, the heartbeat is still there, growing louder and louder. After the narrator decimbers the man’s limbs and hides him under the floor, still the loud heartbeat was constantly there. The police arrived at the house from a complaint from the neighbors. The narrator states that he/she was as calm as they could be and made the police believe that he had done nothing wrong. They even make small talk with the police for a while, but it raises the question as to why would the police stay so long to make small talk? Don’t they have something more important to do? The heartbeat that the narrator hears gets louder and stronger than ever before that during their small talk, he/she bursts out and admits that he/she had killed the man and that the body was under the floor. This action makes you think if the heartbeat that the narrator was hearing even existed, or was it all from their paranoia? Was the narrator as calm as they thought they were while talking to the police, or was it all in their mind? The police would probably not stick around to make small talk unless they were gaining suspicion from the narrator’s actions.

As you can see, the “Tell Tale Heart” has a deeper meaning when it comes to the psychological side. The narrator in this story deals with extreme anxiety that led them to have intense paranoia resulting in them blowing his cover and turning themself in to the police over a motiveless murder. 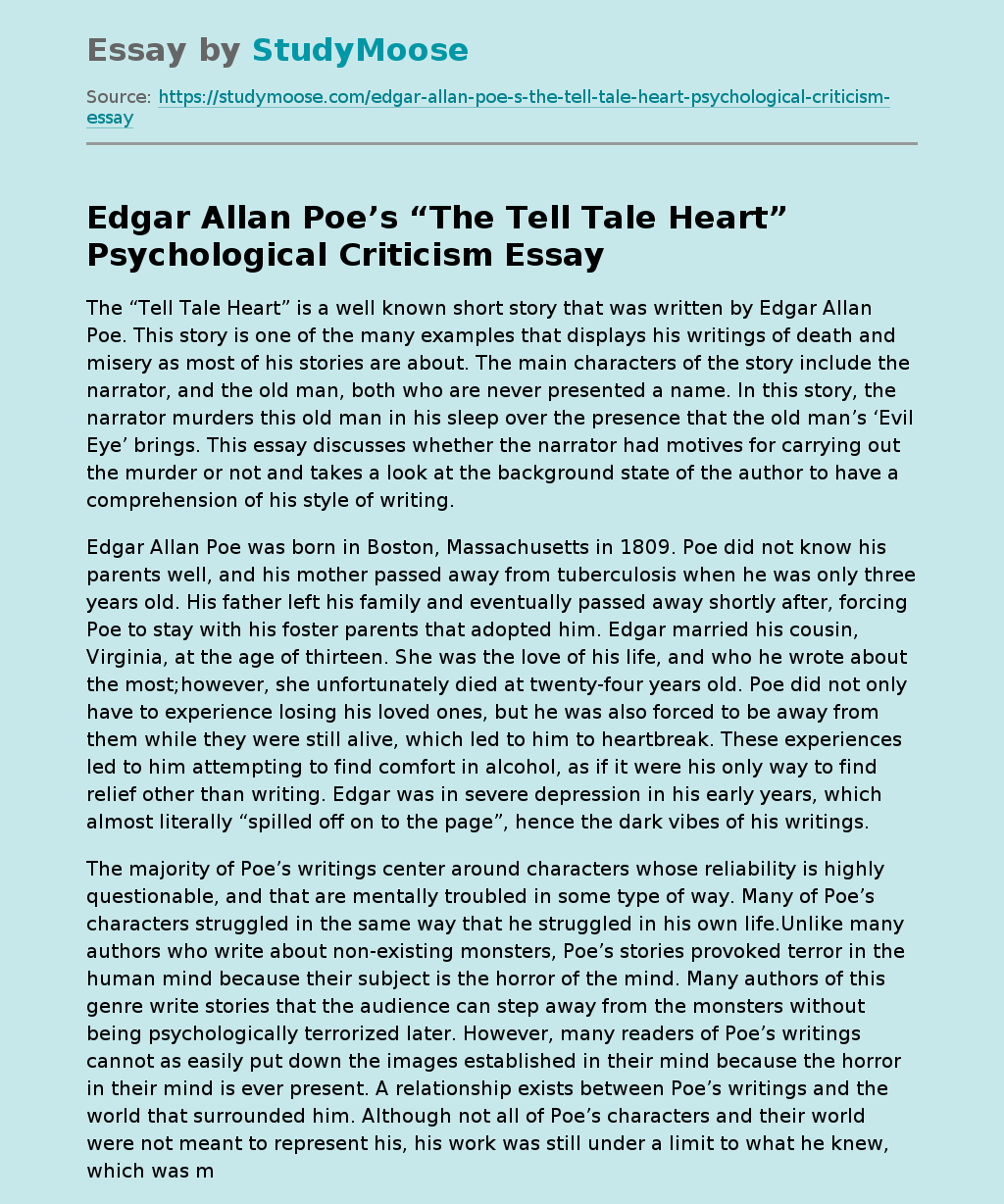