Contradictions on the "Tell-Tale Heart' by Edgar Allen Poe

Don't use plagiarized sources. Get your custom essay on
“ Contradictions on the “Tell-Tale Heart’ by Edgar Allen Poe ”
Get custom paper
NEW! smart matching with writer

” But then the narrator tells us that although the victim awakes startled, the narrator simply stood his ground in the doorway since “His room was as black as pitch with the thick darkness…and so I knew that he could not see the opening of the door…” (Poe 292). This implies that the room and hallway are pitch black, which means that neither the victim nor the predator can see anything – without light. So the narrator can both see and not see his victim.

This carefully concealed contradiction shows that the narration itself is unstable, just as the narrator’s mind is.

§Another contradiction can be found in the second paragraph of the story. The narrator says, “It is impossible to say how first the idea entered my brain” (Poe 290). This suggests that the narrator was clueless as to how he thought up of the idea of killing the old man. It is saying that it was not his decision, and implying that he was never thinking about it. Later in the paragraph though, he says “by degrees–very gradually–[he] made up [his] mind to take the life of the old man” (Poe 290).

This contradicts the previous quote. First, he says that it was not his decision, but in the latter quote, the narrator tells the audience that “[he] made up [his] mind to take the life of the old man.” Surely, even the narrator himself was confused.

§The narrator says that when he was spying on the old man, he “thrust in [his] head” (Poe 291). By definition, thrust means to push or drive quickly and forcibly. The reader gets an image of the narrator passing through the threshold abruptly. For “cunningly [he] thrust it in” (Poe 291). The next line contradicts this statement for he says he “moved it slowly–very, very slowly, so that [he] might not disturb the old man’s sleep” (Poe 291). Now, the reader sees an image of the narrator peeking through gradually and quietly, so that the waking of the old man could be avoided. In fact, he did it so slowly that “it took [him] an hour to place [his] whole head within the opening” (Poe 291). Taking an hour to put a head through a doorway truly is a long time, indicating that he could not have thrust his head through the doorway. Thrusting his head in to spy on the old man and doing it “very, very slowly” very much contradicts each other.

§The narrator speaks of the eye of the old man that bothered him. He describes it as “a dull blue, with a hideous veil over it” (Poe 293). He describes it as if it is something weak, without strength, for it cannot even tell when a beam of light is on it, as the narrator did every night, for eight consecutive nights. Near the end of the story, the narrator says that it is something else, again a contradiction. “No human eye–not even his–could have detected any thing wrong” (Poe 294). This indicated that there is a power that the eye possesses. If a normal human eye, already with great “power,” could not detect anything wrong, surely a dull eye with “a hideous veil over it” cannot do any better. The narrator though gives power to the eye because he puts the old man’s eye in a higher position than that of a normal human eye. Even the emphasis on the word “his” through the means of italics says that the narrator is saying that the eye holds power.

Irrational human drives such as obsession, paranoia, the desire to destroy and other mental psychoses such as these cannot be rationally explained. It is quite complicated and even an in depth analysis of these themes is close to impossible. One cannot really explain someone’s obsession, simply because no one knows what is actually going on in the obsessed mind, other than the obsessed himself. It is unlikely that I would be able to explain the very brain activity of the obsessed. Even if I ask questions or experiment on him, I would not be able to comprehend it all. Similarly, attempts of discovering the foundation of paranoia are difficult. Perhaps it is the many factors that contribute to this.

In the end, it all leads to in depth analysis that would only uncover irrational and illogical reasons as to how one became paranoid, as it also is with how one became obsessed. The narrator of the story attempts to redeem himself by saying that he is not a madman. In explaining everything, he believes that he is in fact rational. The story, though, full of contradictions, proves that the narrator is unstable, and all the explanations in the world could not unravel the mysteries of obsession and paranoia.

Contradictions on the "Tell-Tale Heart' by Edgar Allen Poe. (2016, Jun 26). Retrieved from https://studymoose.com/contradictions-on-the-tell-tale-heart-by-edgar-allen-poe-essay 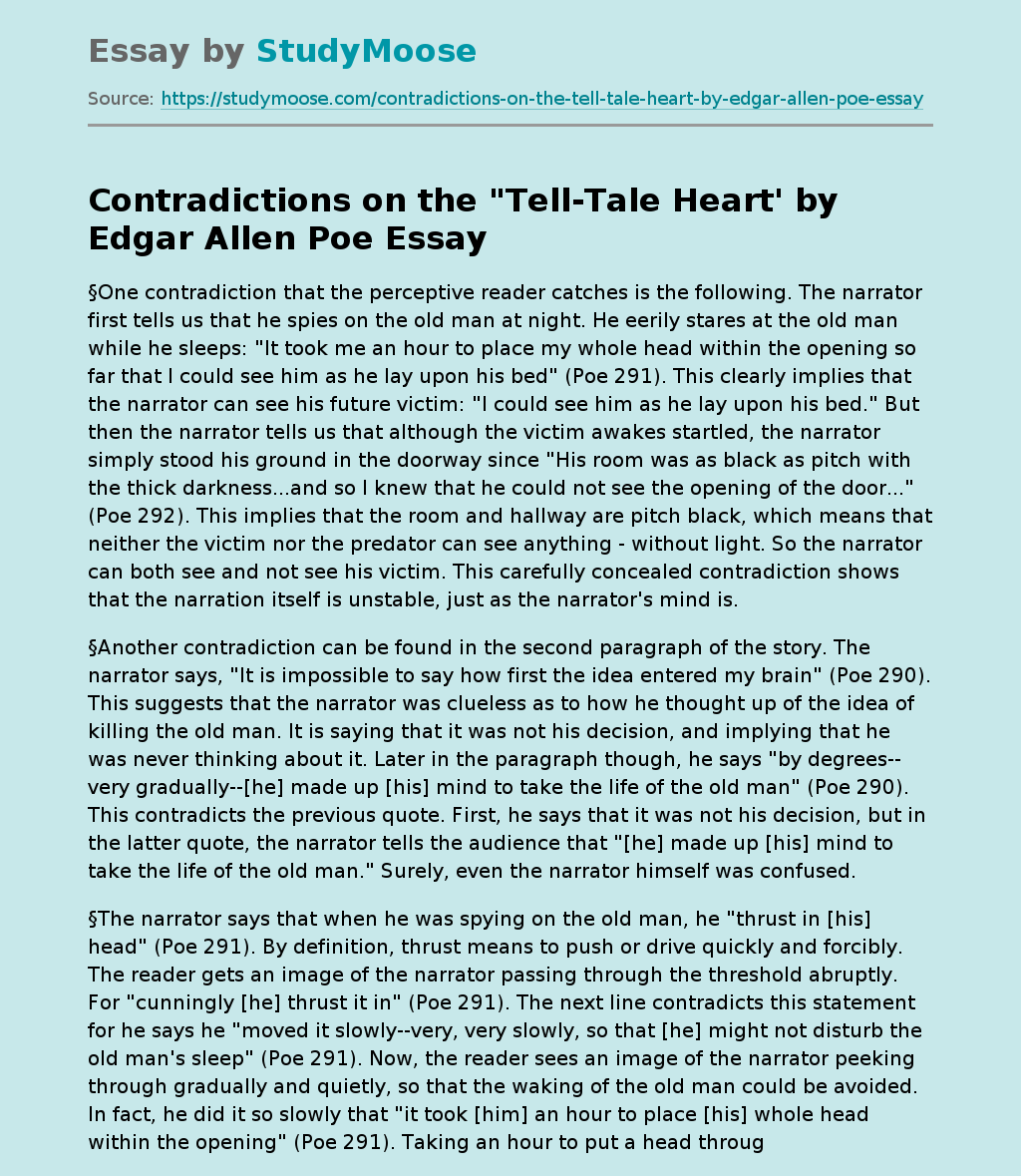