A close reading of Beowulf

The epic poem Beowulf contains contradictions about the heroic character of the protagonist Beowulf. Two certain passages in Beowulf, one at the beginning of the text and one near the end, offer evidence of inconsistencies within Beowulf’s character. We must ask one question of the poem’s protagonist: Is he really the hero he claims to be? Certain aspects of Beowulf’s integrity, mainly his lies about people’s perceptions of him, contradict the conventional classification of a hero.

The legend of Beowulf begins with King Hrothgar, who is in a dilemma because Grendel, an evil monster, has been unremittingly attacking Heorot for twelve years.

Don't use plagiarized sources. Get your custom essay on
“ A close reading of Beowulf ”
Get custom paper
NEW! smart matching with writer

Beowulf, a warrior and thane of the Geat King Hygelac, hears of this and decides that he must go to Heorot to help Hrothgar, for he is the only one who can accomplish this great feat:

;He announced his plan:

to sail the swan’s road and seek out that king,

that famous prince who needed defenders.

Nobody tried to keep him from going,

No elder denied him, dear as he was to them.

Instead they inspected omens and spurred

This passage is one of the first introductions to Beowulf as a character. The sentence “…prince who need defenders” portrays Beowulf as a noble warrior, well respected at home. He would “seek out that king,” the king who needed Beowulf the great warrior. Here, the poet’s word choice implies that Beowulf is fearless. Beowulf knows that he is the only one who can help Hrothgar, the “famous prince who needed defenders.” But Hrothgar had other warriors who helped to defend Heorot from Grendel, “…powerful counselors, the highest in the land, would lend advice, plotting how best the bold defenders might resist and beat off sudden attacks” (171-74). Here, it is evident that Beowulf has told a lie. It is not true that Hrothgar needed defenders. Although Hrothgar had defenders that may have been unsuccessful in the slaying of the monster, that does not imply that he needed defenders, or more specifically, Beowulf himself.

A different version of how the elders viewed Beowulf becomes apparent after his victorious defeats of both Grendel and his mother. Beowulf returns home to be greeted with this speech from Hygelac:

“How did you fare on your foreign voyage,

dear Beowulf, when you abruptly decided

to sail away across the salt water

and fight at Heorot? Did you help Hrothgar

Apparently, Hygelac did not fully support Beowulf’s ambitions to rescue Heorot. It is obvious Hygelac views Beowulf’s undertaking as childish and quite impulsive, which is made clear by his using of the word “abruptly.” When Hygelac says “did you help Hrothgar much in the end?” he doubts Beowulf’s ability to defeat Grendel. It is obvious that he did not think he would see Beowulf alive again. This feeling is reinforced a few lines later when Hygelac says, “I dreaded the outcome of your expedition […]” (1993-94).

The sudden apprehensiveness on Hygelac’s part creates a sharp contrast to the first introduction to Beowulf, where he is seemingly the Geat’s top warrior, who could not be defeated; “he was the mightiest man on earth” (197). This poses the question; are we to believe anything Beowulf has said so far in relation to his heroic accomplishments? Does this contradiction make him a liar? If he is a liar, does it diminish the feats he has achieved, such as the slaying of Grendel and Grendel’s mother?

Another one of Beowulf’s contradictory lies can be found within these passages. The first passage states that “… no elder denied him,” while in the second passage the poet’s words, such as when Hygelac asks Beowulf if he “helped Hrothgar much in the end,” imply that the Geats were less than thrilled about Beowulf’s decision to go to Heorot. It is obvious that Hygelac’s words are contemptuous and that he is not asking Beowulf what happened at Heorot because he truly wants to know if Heorot is saved. Hygelac is asking Beowulf in a mocking manner because the elders did indeed deny Beowulf in his endeavor to help Heorot.

Evidence of the true sentiments toward Beowulf from his kin can be seen when the poet writes “he had been poorly regarded for a long time, was taken by the Geats for less than he was worth: and their lord too had never much esteemed him in the mead-hall”(2183-2186). This sentence explains that Beowulf was not held in such high esteem as he would have liked. His decision to go to Heorot is an attempt to assert his worth to his family and people because they “firmly believed he lacked force, that the prince was a weakling […]”(2187-88). Beowulf, who holds Hygelac in high regard, wants to defeat Grendel to make Hygelac proud.

If Beowulf is a weakling, how is it that he was the only one able to fight and defeat the indestructible Grendel? Beowulf somehow knows that it is his destiny to defeat Grendel, which may be the true reason for “abruptly” deciding to travel to Heorot. For twelve years, no one in Heorot could stop Grendel. They tried time and again to kill him by using any kind of weaponry they could forge. How is it that a newly arrived foreigner defeat Grendel without any armor or weapons? It must be because God had helped the “hero.” This is apparent in Beowulf’s many references to God: “Whichever one death fells must deem it a just judgment by God” (440-41) and “the Geat placed complete trust in his strength of limb in the Lord’s favor” (669-670).

The Oxford English dictionary defines a hero as “a man distinguished by extraordinary valour and martial achievements; one who does brave or noble deeds; an illustrious warrior.” Valor, braveness and nobility are not characteristics usually found in people who are liars. Noble warriors do not have to lie to assert their worth, their actions speak for themselves. Brave warriors do not lie because they are courageous and do not fear anything, especially the truth. Because one cannot be brave and noble while also being a liar, and because being brave and noble are characteristics of being a hero, it is clear that Beowulf cannot be called a hero.

A close reading of Beowulf. (2016, Jul 15). Retrieved from http://studymoose.com/a-close-reading-of-beowulf-essay 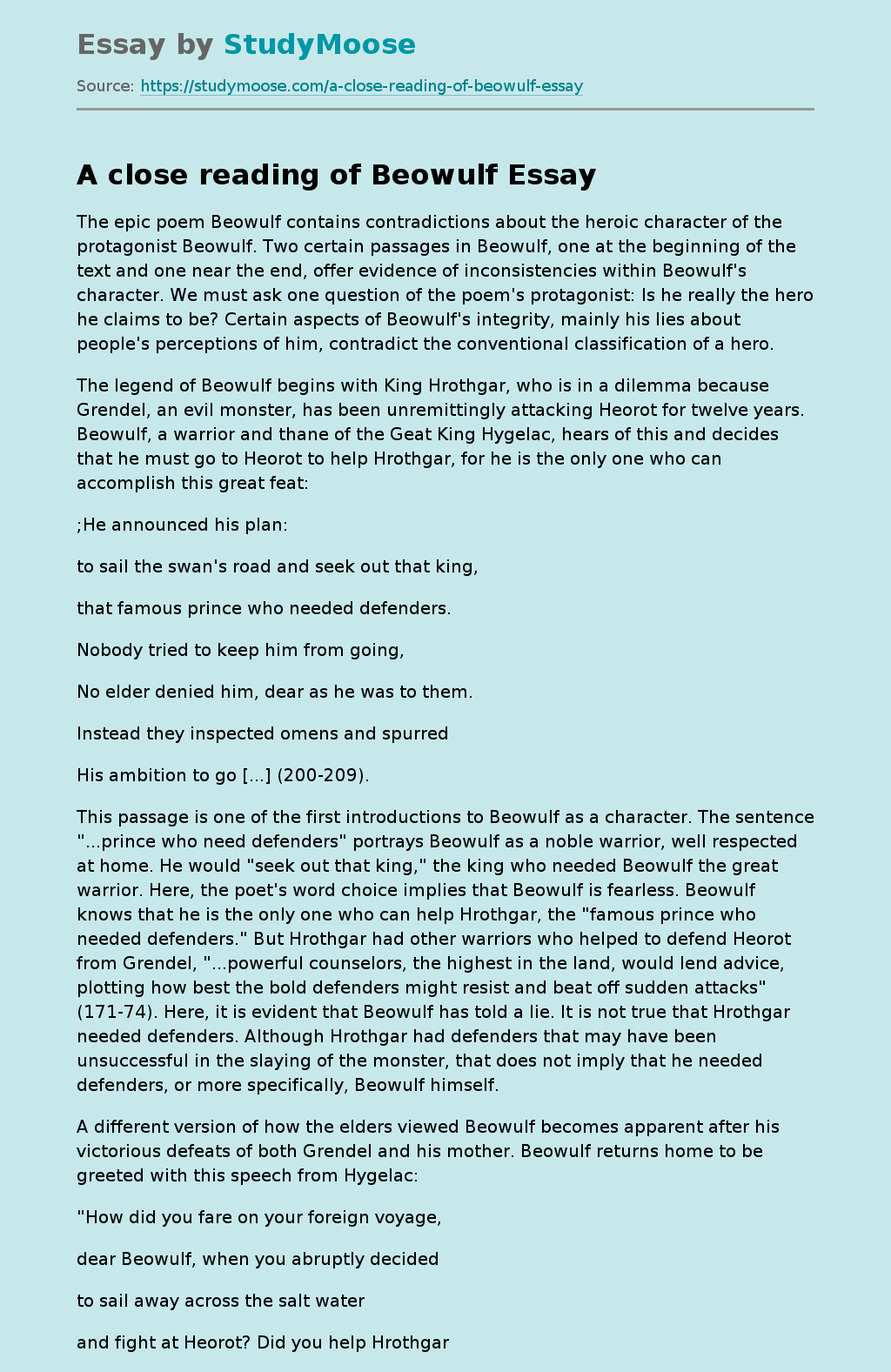