In Beowulf, an epic poem which was written anonymously 1,070 years ago, the main character stood as the embodiment of the heroic code; being revered for his heroic qualities that are shown throughout the poem. From the beginning of the story, nobility and heroism were considered to be the most important factor of life in that Anglo-Saxon era. Now, many would go about boasting their achievements to gain this nobility but, as the story progressed over a span of 50 years, Beowulf encountered three main conflicts that allowed him to show not only his immense strength and bravery, but his humble character and loyalty to the heroic code.

Don't use plagiarized sources. Get your custom essay on
“ The Epic Hero Beowulf  ”
Get custom paper
NEW! smart matching with writer

All of these traits prove Beowulf to be a true hero, even though he lead to a defeat at the end of the story. The three main conflicts that Beowulf encountered were between Grendel, Grendel’s mother, and the dragon.

In the first battle, Beowulf pridefully volunteered to take on Grendel as a young, unarmed warrior, even though it wasn’t his battle to fight and he was up against a powerful being that wasn’t even human.

The reason he did fight was because he showed loyalty to Hrothgar. Hrothgar was the leader of the Danes in this time period and lost security in his community when Grendel ravaged through the town and killed his people. As stated in the text, Beowulf, “ In his own homeland, the thane of Hygelac, the valiant Geat, heard the tales told of Grendel. This Geat was among men the greatest in strength, most noble and mighty, for as long as his life-days were destined to last.

” (page 80) In this quote, it is explained how Beowulf showed to be loyal to the heroic code when he killed Grendel, and he held enough strength to take him on. Since Hrothgar had helped Beowulf’s father in the past by paying his dues, Beowulf felt indebted to him and wanted to show his gratitude by fighting his town’s battle. The fact that he went out of his way, in a town he doesn’t even live in, to help an entire community is so meaningful, especially since he didn’t do it to get gifts or leadership. Beowulf expressed his loyalty to Hrothgar’s people by saying, “I purposed in spirit when I mounted the ocean, When I boarded my boat with a band of my liegemen, I would work to the fullest the will of your people Or in foe’s-clutches fastened fall in the battle. Deeds I shall do of daring and prowess, Or the last of my life-days live in this mead-hall.” (page 31). In this speech, he explained that he had full loyalty to this community, and vowed to do everything he can to protect them or die trying. This was a very powerful quote that set the tone for the rest of the poem, because readers got to see how he truly felt about his role in this town.

In the second battle with Grendel’s mother, Beowulf took on the protector role once again and fought her when she came to the hall to avenge her son, Grendel. This was another example of how Beowulf showed heroism, because he felt the need to finish what he had started and did not want to leave the community with any fear of safety. Beowulf takes on the responsibility to go to Grendel’s mother’s home to fight her. In this quote, Beowulf shows his loyalty and bravery by saying, “Ask not of joyance! Grief is renewed to The folk of the Danemen. “ (page 47). He is saying that even if he dies, at least he will be doing it while killing this monster. Like the fight before, he didn’t know what he was up against, and it was a possibility he could die. But, like the true hero he was, he did it anyway. In this second battle, Beowulf really shows he is not like any other character. Beowulf was a young warrior during this battle, and the fact that he still cared about others lives more than his own, shows he’s a true hero. This fight with Grendel’s mother became more dangerous than the one with Grendel because of the problems with his sword. Once again, Beowulf had enough courage to continue with the fight and he ended up killing her. He wanted to bring back something for his people to prove that he agrees to fight or die trying, by bringing back Grendel’s decapitated head. After he decapitated him, the sword disintegrated, which showed that he did his deed. This symbolized his strength, loyalty, and bravery once again. The people revered his actions, with Hrothgar even stating, “ Your fame is renowned wherever men journey, my dear friend Beowulf, among all the peoples. You hold power with balance, with wisdom of mind. Now I shall fulfill our friendship as we earlier agreed. And you shall bring peace to your people for a long time to come, a source of strength to the heroes.” This quote was part of a speech from Hrothgar to Beowulf he tells him he’s going to reward him for taking on a strong obligation to protect and bring peace to the people. Even though Beowulf wasn’t looking for a reward, he received one anyways for killing Grendel’s mother. In this battle, Beowulf showed the perfect example of an epic hero. He showed no fear, and he showed he will not back down from any battle, because he wanted the best for his people.

In this final battle, which took place 50 years later when Beowulf was finally leader, he really proved that he cared more about the people in the community than his own well being. During Beowulf’s last battle, he felt as if he was going to die, but he still fought the dragon to protect the people. In Beowulf’s last vowel he says,“I braved in my youth-days battles unnumbered; Still am I willing the struggle to look for, Fame-deeds perform, folk-warden prudent, If the hateful despoiler forth from his cavern Seeketh me out!” (page 75) He was expressing how, even though he’s old and had faced many battles in his youth, he still knew what needed to be done and would be prepared to fight when the “dark destroyer”, or dragon, comes to fight. In the end, he fought for his people as well as everything he built there. In this section, the difference that Beowulf had compared to other warriors like him was highlighted shockingly. When his multiple warriors attempted to aid him, they completely left him when they faced the dragon; leading to his own defeat in the end. Beowulf would never leave someone who truly needed him, especially during a battle. However, this isn’t the case for every thane, even if they are aiding a leader like himself. Even after getting bitten by the dragon, he wouldn’t die without making sure the dragon was defeated. Beowulf kills the dragon despite just being left with one thane, and when he started to bleed out he told this thane, Wiglaf, “For the gold and treasure, to God my thanks, to the Wielder-of-Wonders, with words I say, for what I behold, to Heaven’s Lord, for the grace that I give such gifts to my folk or ever the day of my death be run!” (page 78). Even though Beowulf was dying at that moment, he still wanted to make sure his people were going to be safe and left with prosperity after his death. Beowulf also told Wiglaf to look after the needs of his people, because he had no descendants, but felt as though he trusted Wiglaf because he was the only one to stay. Beowulf exits the story with a bittersweet ending, for he was not necessarily fearful of death because he knew he died for a cause. “You are the last of us, the only one left Of the Waegmundings. Fate swept us all away, sent my whole brave high-born clan To their final doom. Now I must follow them.” This is also a significant quote as well, for this is when Beowulf says his final words and he’s telling Wiglaf that all of his relatives have died; now ending with him. These lines are important because they show the courage of this dying hero. Throughout the story, Beowulf was very concerned about himself and his well being but still fought, and it takes a hero such as him to continue to go through with these fights regardless. No else in this story was as brave as Beowulf, not even the other kings. In Beowulf’s final words, he shows a lot about him as a person. From the beginning to Beowulf’s last breath, his main reason for battling with all of these people has not changed. His main passion was to be the warrior that his community needed.

In conclusion, Beowulf’s bravery and heroism are well exhibited throughout the poem. Beowulf is an example of a true hero who had continued to put his own life at risk to save and protect others. Even in his dying moments at the end of the last battle, he died relieved with the fact that he could at least leave something behind for his people. Though he left his community with no real descendants despite Wiglaf, he still managed to exit the story without worrying the community of their safety. He did his job in every way possible and gave himself a noble and legendary identity. If this poem were to show readers anything, it would be that this is what a true hero should look like; one who is selfless, loyal, brave, and wise. 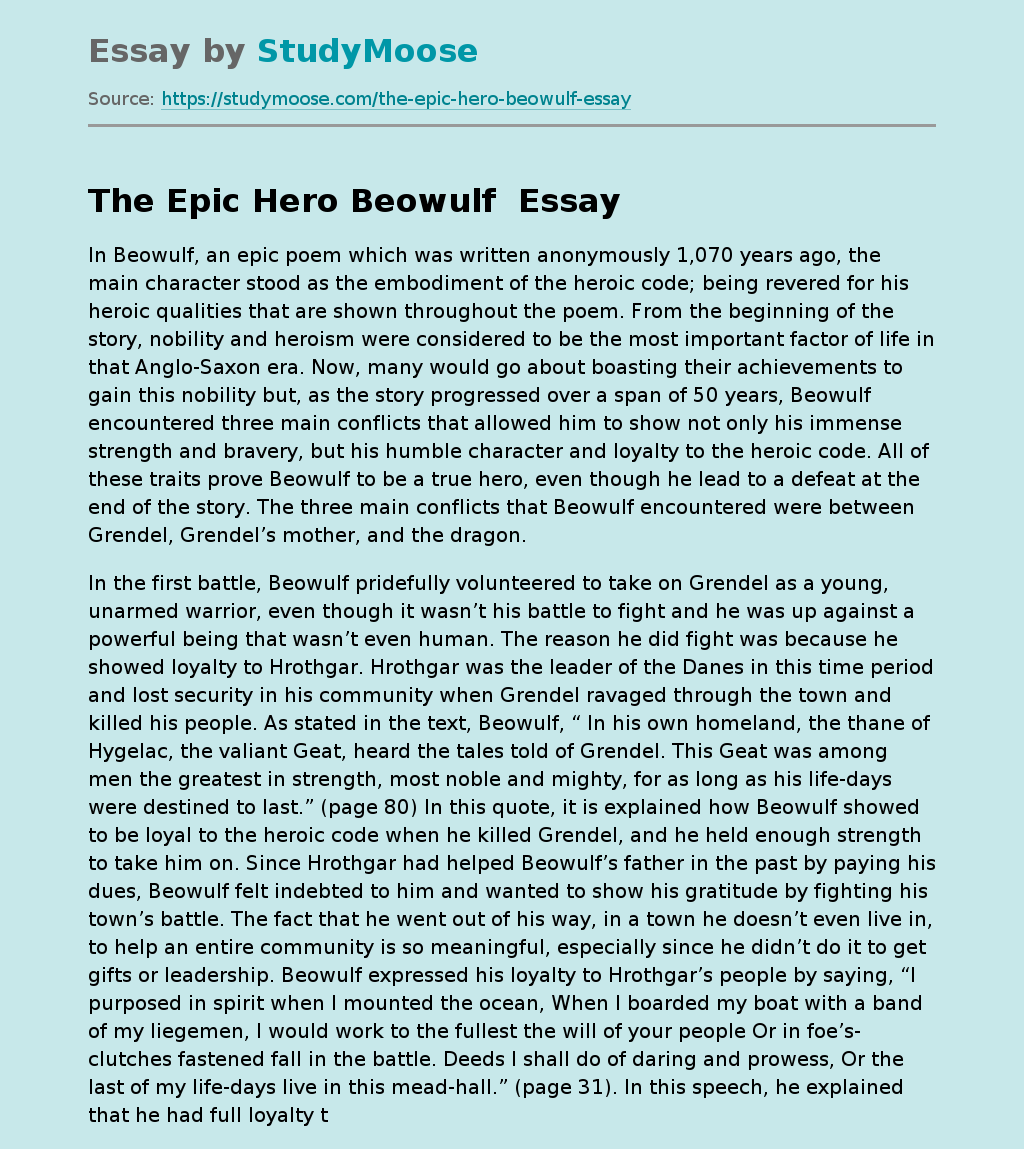