‘The Tell Tale Heart’ : Is He Truly Insane

Don't use plagiarized sources. Get your custom essay on
“ ‘The Tell Tale Heart’ : Is He Truly Insane ”
Get custom paper
NEW! smart matching with writer

Proficient in: The Tell Tale Heart

The narrator would open the door, oh so gently, and placed the thin ray of the lantern above the eye of the old man, finding it closed every single time. This tells readers that the narrator was clever and acted cunningly before killing the old man.

“And this I did for seven long nights – every night just at midnight – but I found the eye always closed; and so it was impossible to do the work; for it was not the old man who vexed me, but his Evil Eye.”(Poe, 23) This quote tells readers that the narrator in the story did not have anything against the old man, but it was his eye that vexed him. This is an obvious example of how the narrator was insane. If the narrator had no problem with old man, why would he want to take his life?

Although the narrator was clever enough to plan out his evil plot, it was the night of the old man’s murder that changed everything. As always, the narrator was watching the old man sleep, however this time he woke up the old man. Startled, the old man did not go back to sleep, because of the fear of someone breaking in. At this point the narrator finally got a look of the vultures, pale, blue eye (the evil eye) that vexed him. “It was open – wide, wide open – and I grew furious as I gazed upon it. I saw it with perfect distinctiveness – all a dull blue, with a hideous veil over it that chilled the very marrow in my bones; but I could see nothing else of the old man’s face or person; for I had directed the ray as if by instinct, precisely upon the damned spot.” (Poe, 24)

Although the narrator’s plan was so cunning, three police officers came knocking on the narrator’s door to investigate, stating that there was a complaint of a shriek the previous night. The narrator acted calmly. “I took my visitors all over the house. I blade them search – search well. I led them, at length, to his chamber.” (Poe, 25) This quote from the story tells us that the narrator showed courage, giving the impression that he had ‘nothing’ to hide (which he did). After the police officers started to believe the narrator, the narrator started to hear a sound. It was the heartbeat of the old man. He then spoke louder, so loud so that the police officers wouldn’t be able to hear the “sound.” “The ringing in my ears: but still they sat and still chatted. The ringing became more distinct- it continued and became more distinct; I talked more freely to get rid of the feeling; but it continued and gained definiteness- until, at length, I found that the noise was not within his ears.” (Poe, 26)

This lets readers know that the sound of the old man’s heartbeat, the same heartbeat that he heard before he killed him, was getting louder and louder. “Was it possible they heard not? Almighty God! –no, no! They heard! – They suspected! – They knew! – They were making a mockery of my horror! – this I thought, and this I think.” (Poe, 26) This means that the narrator thought that the police officers were able to hear the heartbeat and were just mocking him, so that he would turn himself in. After a while the narrators face grew paler, his voice grew louder, and in the end, turned himself in. “Villains!” I shrieked, “Dissemble no more! I admit the deed! – tear up the planks! Here, here! – it is the beating of his hideous heart!”(Poe, 26) This final quote tells us that after a while of planning the murder of the old man, and after the countless nights of watching him sleep, were all thrown away because of the guilt that they narrator had felt. The heartbeat that he claimed “everyone heard” was the same heartbeat that he heard before he killed the old man. If he was sane, why would he turn himself in? Only to be punished afterwards.

Due to many pieces of evidence, it is highly evident that the narrator in the short story ‘The Tell Tale Heart’ is in fact, insane. It is clear that he insane because he watched the old man sleep for countless days, cut up the corps of the old man and placed it underneath the boards of the floor, and claimed he heard the heartbeat of the old man once he was dead. All these opinions that are stated above are very stimulating points, which all prove that the narrator is insane. The short story’s message is all about guilt. Since the narrator killed the old man for no reason, the heartbeat that he heard once he was with the police officers, was just his conscience reminding himself about the heartbeat that he had heard before taking the life of the old man. This tells readers that even the cleverest plans, can back fire in the end, since the narrator did, in fact, turn himself in. It is clear to say that the narrator is insane, since he killed the old man for no reason, thus ridding himself from the old man’s vulture’s eye forever. If one goes back to the first question: “The man denies that he is insane. He offers proof. Can you believe him?” Would one say that he was sane or insane?

‘The Tell Tale Heart’ : Is He Truly Insane. (2016, Mar 22). Retrieved from https://studymoose.com/the-tell-tale-heart-is-he-truly-insane-essay 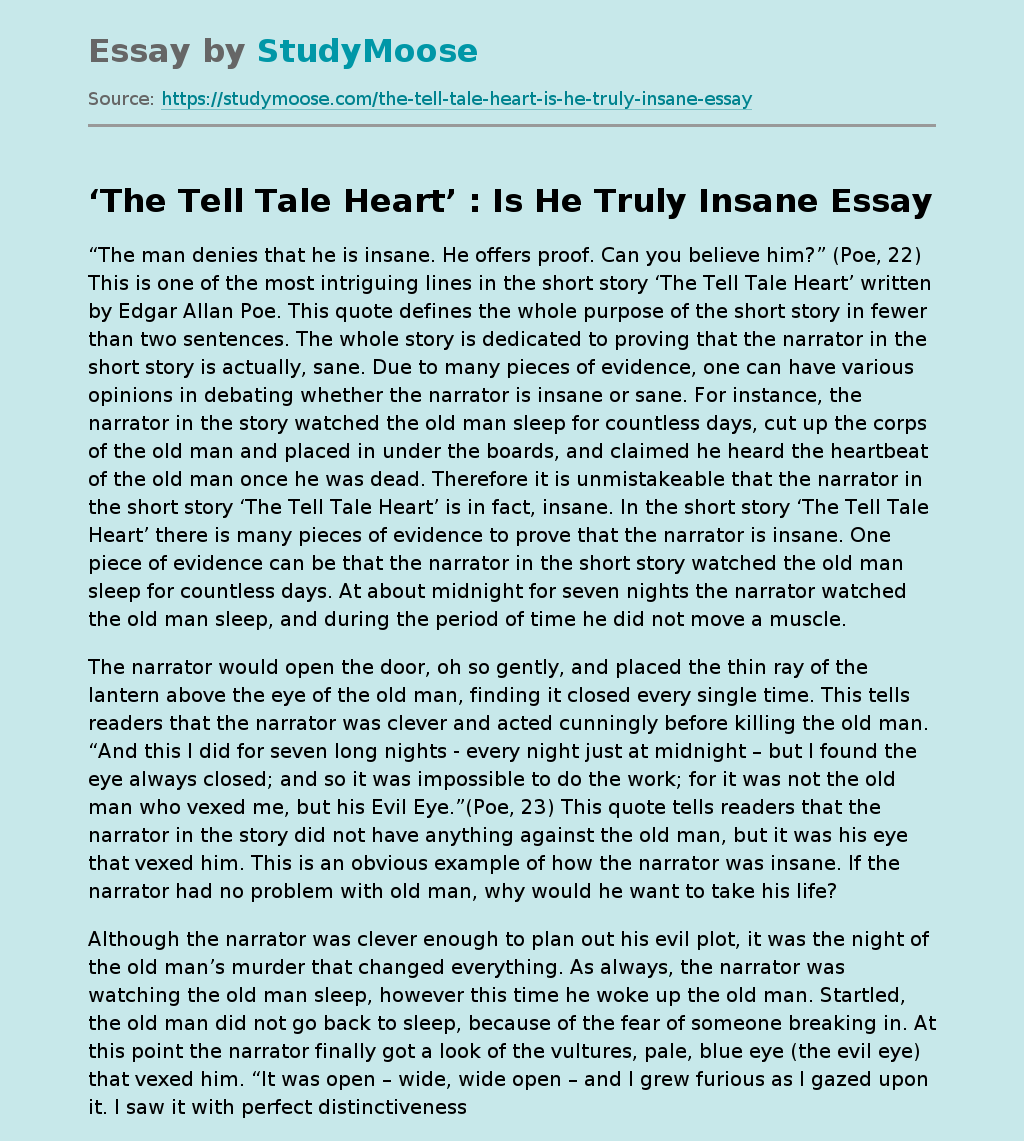