Numerous aspects of comedy can be found in pages one to ten of ‘The Importance of Being Earnest’.
The aspect of servants and masters is one that presents itself immediately in the play, through the relationship that exists between Algernon, the ‘master’, and Lane, the servant. The first thing that is spoken about between these two characters, is Algernon’s piano playing. Upon being asked “Did you hear what I was playing, Lane?” Lane replies, “I didn’t think it polite to listen, sir.

Don't use plagiarized sources. Get your custom essay on
“ Aspects of comedy present in pages 1-10 of ‘The Importance of Being Earnest’ ”
Get custom paper
NEW! smart matching with writer

” This is comic for a couple of reasons.

Firstly, it could be interpreted that Lane is, subtly, scolding Algernon for even thinking that a servant would listen to his master playing the piano, which is funny as it should be Algernon doing the scolding, as master. Secondly, Lane could simply be poking fun at the Victorian social system; ridiculing it at the fact that Lane should not even be allowed to listen to Algernon play, which may seem ridiculous to his character, and perhaps the audience also, especially in the present day.

Another aspect of comedy presented in the first ten pages of ‘The Importance of Being Earnest’ is Bathos. Bathos is when a topic falls from something sublime and important, to something mundane and trivial. This occurs when Algernon is talking to Lane about afternoon tea, “Speaking of the science of Life, have you got the cucumber sandwiches cut for Lady Bracknell?”.

This is comic as ‘cucumber sandwiches’ are , obviously, totally unrelated to ‘the science of Life’, and in normal society would not be considered as neither important nor particularly interesting, something which either Algernon or Lady Bracknell would clearly be inclined to disagree with.

This reference to cucumber sandwiches, and there importance, also pokes fun at Victorian high society; the things important in their lives would seem trivial and insignificant to the rest of society, and not at all ‘high’ in importance.

Marriage, also, is presented in this scene, once again through Algernon. After Jack informs Algernon that he wishes to propose to Gwendolen, Algernon replies “I thought you had come up here for pleasure? … I call that business”. Here, Algernon undermines the idea of marriage and proposal,saying that he sees it as business, and later on saying that he finds not at all romantic. Cynicism is applied here, and is used comically by Wilde to, once again, highlight the odd way that things of great importance are treated by Algernon, and perhaps by the rest of the upper-classes too.

This line is a poignant one, as it highlights both what people thought about ‘the country’ as opposed to ‘the town’ in Victorian society, and also the double identity of Jack, which is the main recurring theme throughout the rest of the play. It also shows not only the fictitious feelings created by Jack, for his alter ego Ernest, but also perhaps, the true feelings of Jack himself, hinting at why he visits London so often.

There are also minor slapstick influences in this part of ‘The Importance of Being Earnest’, for example when Jack ‘puts out his hand to take a sandwich’ and ‘Algernon at once interferes’, however this relies entirely upon how the director interprets the stage directions, and will most likely vary from production to production. Although, slapstick could be used to make this part of the play more comic, for example if Algernon were to very obviously slap Jack’s hand away, and appear offended.

These are just a few examples of some of the aspects of comedy that can be found from the first scene of ‘The Importance of Being Earnest’.

Aspects of comedy present in pages 1-10 of ‘The Importance of Being Earnest’. (2016, May 22). Retrieved from https://studymoose.com/aspects-of-comedy-present-in-pages-1-10-of-the-importance-of-being-earnest-essay 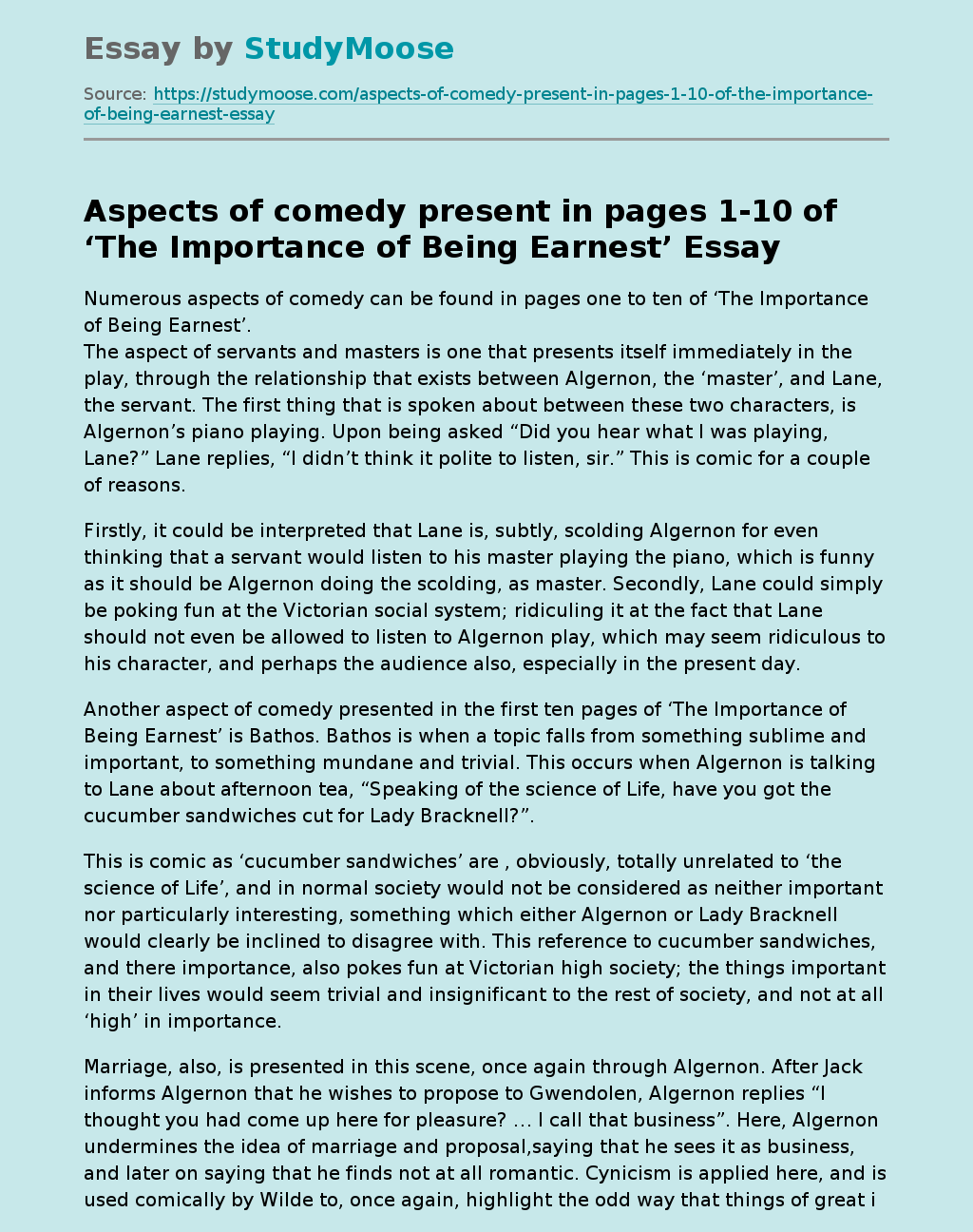