Atticus Finch and Robert Ewell are two very different characters, but are similar in some ways. They both live in Maycomb, Alabama, but are respected differently in their communities as Atticus is seen as a brave and courageous man, while Robert Ewell is seen as a drunken coward. Atticus ‘lives on the main residential street in town’, and Robert Ewell lives in ‘what was once a negro cabin’, but it is falling apart.

The cabin’s plank walls were supplemented with sheets of corrugated iron, its roof shingled with tin cans hammered flat, so only its general shape suggested its original design: square, with four tiny rooms opening on to a shotgun hall uneasily upon four irregular lumps of limestone.

Don't use plagiarized sources. Get your custom essay on
“ In What Ways Do Atticus Finch and Robert Ewell Differ and What Do They Have in Common ”
Get custom paper
NEW! smart matching with writer

’ The Ewell’s scavenge a lot in the county dump they live behind to find bits and pieces for their house. Atticus Finch is a lawyer and has fought many battles in the court room, and has mostly won them. He is one of a handful of members in his community who can see the inequality and racism towards black people.

Robert Ewell doesn’t have a job, and ‘lives off county cheques, but spends them on green bottle whisky’. He doesn’t even make an effort to try and provide for his family, and is also prejudice and racist. The men’s jobs, or lack of them, reflect their social status in Maycomb. The Ewell’s have lived and behaved in this manner for generations, while the Finches have been successful.

Both the men have lost their wives, so have single-handedly raised their children. Atticus sets a good example, and ‘plays with them, reads to them and treats them with courteous detachment’.

Atticus also has a maid called Calpurnia, who ‘treats the children like she’s their mother, not their maid’, unlike other maids who favour and are never strict with children. She has been with the family since Jeremy was born. His children are always well kept and polite, and have many friends at school. In contrast, Robert Ewell’s children are dirty, rude and ‘disease ridden’. They all attend school on the first day of every term, but always get sent home for having lice, or being extremely rude to the teacher and fellow classmates.

Robert Ewell neglects his children, and it has now become clear that he abuses them, when it is proven that Tom Robinson didn’t harm Mayella Ewell. ‘Nobody is ever sure how many children there are, as there are always several dirty children’s faces peering out the window’. By Harper Lee describing how poor and unfortunate the children are, where they live, and how they behave, shows how neglected they are by their father and the community, and how poverty can seriously affect a family.

When the case is first spoken about, people automatically favour Mayella Ewell, due to racism and prejudice, and are rude to Atticus for representing Tom Robinson. He gets called many names such as ‘nigger-lover’, and his children also get a hard time at school, but Atticus continues to defend Tom and ignores the rude remarks and names. By doing so, he still gets basic respect from the people of Maycomb, and still presents himself in a courteous manner. In the trials, he is fair to every person he defends, and always tries his best to make the jury believe that they are not guilty.

He also abides by the law, making sure his children attend school; he’s not racist and wanting Jem to speak about the incident where Robert Ewell is murdered, in court. Meanwhile, Robert Ewell is a law breaker, and gets away with it. He lets his children truant from school, and goes out hunting, even though it is illegal in Maycomb. He lies a lot too, like in court he makes up which side Mayella was beat up on, and denies doing it himself. His language in the courtroom is also very bad, as he uses slang and behaves in an uncourteous manner, and his appearance is scruffy, and he doesn’t make an effort to be smart.

On the other hand, Atticus looks smart and speaks properly, making sure what he says is true and says it in a clever way, so it means one thing, but implies something else. This is how he proves Tom Robinsons innocence to the spectators, even though the jury think he’s guilty. At the end of the book, Atticus decides to break the law on one occasion, and go along with Heck Tate’s version of the event, as he doesn’t want Jem growing up being told he was let off innocent, as his dad’s a lawyer.

It was also easier, as Tom Robinson was dead for no reason, because of Robert Ewell, so it was fair to ‘let the dead bury the dead’. With Atticus being a polite, fair, hardworking and a responsible man, he and Robert Ewell are nothing alike. However, neither fit into their communities perfectly, but none of them are ‘normal’. So, with their being some credible similarities, Robert Ewell is a rude drunk and Atticus is courageous, so therefore Harper Lee has portrayed them to be two different completely characters.

In What Ways Do Atticus Finch and Robert Ewell Differ and What Do They Have in Common. (2016, Oct 02). Retrieved from https://studymoose.com/in-what-ways-do-atticus-finch-and-robert-ewell-differ-and-what-do-they-have-in-common-essay 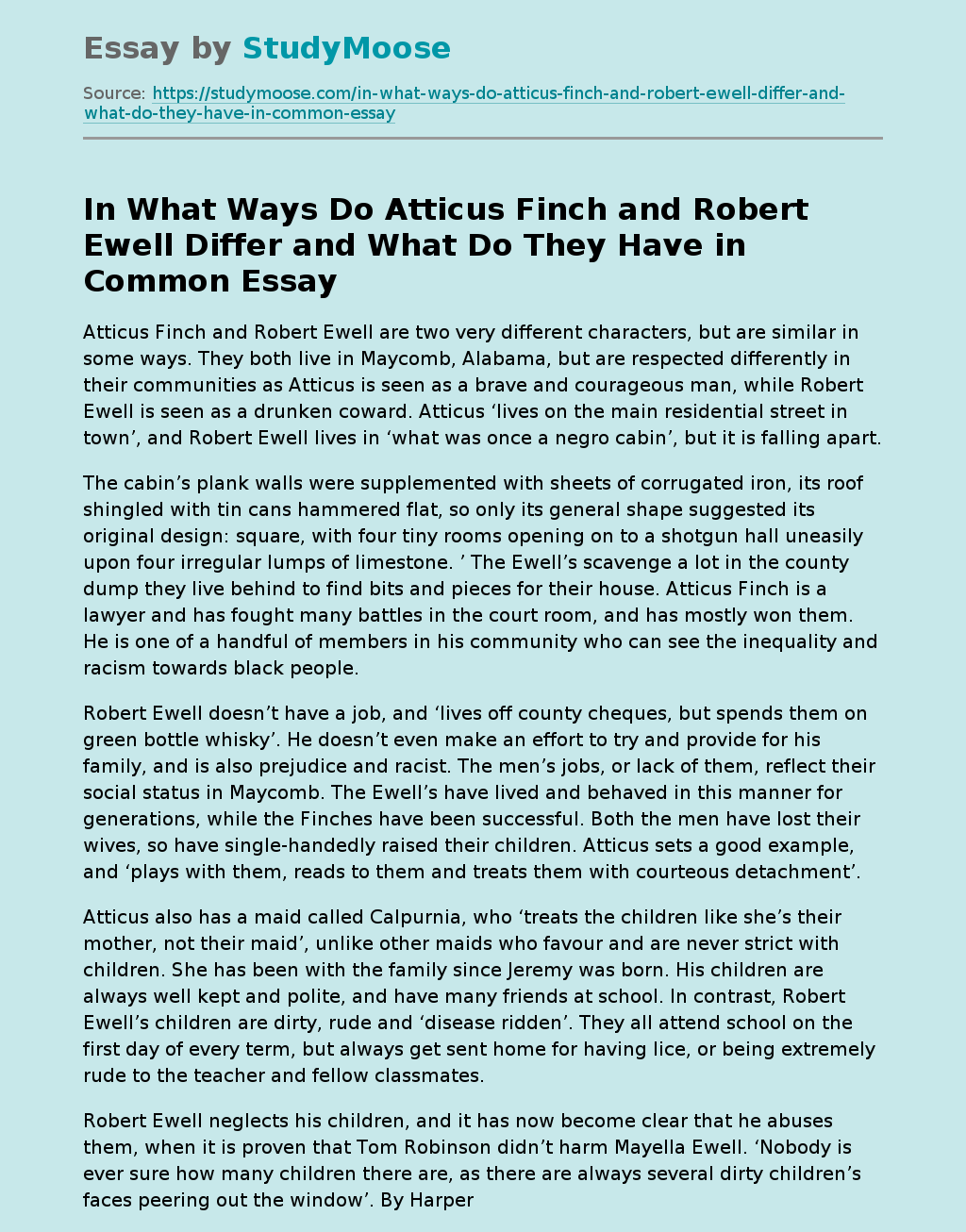