Is Macbeth a Tyrant or a Tragic Hero?

A tragic hero is someone whos fatal flaw, combined with other external factors, bring about ones demise, which is demonstrated by Macbeth in Shakespeares play Macbeth. Macbeth is portrayed as a courageous, brave and noble man who was haunted by superstition and an overpowering ambition. Factors that contributed to the degeneration of Macbeth include the prophecies told to him by the witches, the influence and manipulation of his wife, Lady Macbeth, and finally, Macbeths deep driven intent to become king. Although seen as a daring and valiant hero at the beginning of the play, Macbeths evil desires and long time ambition causes his downfall.

Don't use plagiarized sources. Get your custom essay on
“ Is Macbeth a Tyrant or a Tragic Hero? ”
Get custom paper
NEW! smart matching with writer

Even though Macbeth seems like a malevolent and murderous tyrant towards the end of the play, he is ultimately a tragic hero. The prophecies given by the witches contributed to the degeneration of Macbeths character. The witches foretold that Macbeth would become Thane of Glamis, Thane of Cawdor and the King of Scotland. If not for the prophecies, Macbeths curiosity and ambition to become King might never have aroused.

To be king stood not within the prospect of belief to him before he had heard the prophecies, however, when hearing the prophecies of becoming king, horrible imaginings of murder, though fantastical, had come across his mind. As the play progresses, Macbeth increasingly relies on the prophecies given by the witches stirring up Macbeths curiosity and ambition which factor in corrupting his character and sending him to his dusty death. The manipulation and influence of Lady Macbeth was also a factor of Macbeths downfall.

When Lady Macbeth reads her husbands letter, she is afraid that Macbeth is not evil enough to do what he must to seize the crown. She wishes her husband a quick return so that she can pour her spirits in his ear and chastise with the valour of her tongue. Although Lady Macbeth seems like a lovely and polite lady, she is in fact a vicious and manipulative woman full of malice.

She is also a horrible influence on Macbeth telling him to look like the innocent flower, but to be the serpent undert as well as telling him he was a coward when he was afraid to murder King Duncan. After Macbeth had slaughtered King Duncan, he was filled with a guilty conscience, regretting his wrong. His wife however, thought he was infirm of purpose. This was the first murder that Macbeth had experienced, however after the first murder, killing seemed to be the only solution to maintain his reign as king.

Is Macbeth a Tyrant or a Tragic Hero?. (2016, May 24). Retrieved from https://studymoose.com/is-macbeth-a-tyrant-or-a-tragic-hero-essay 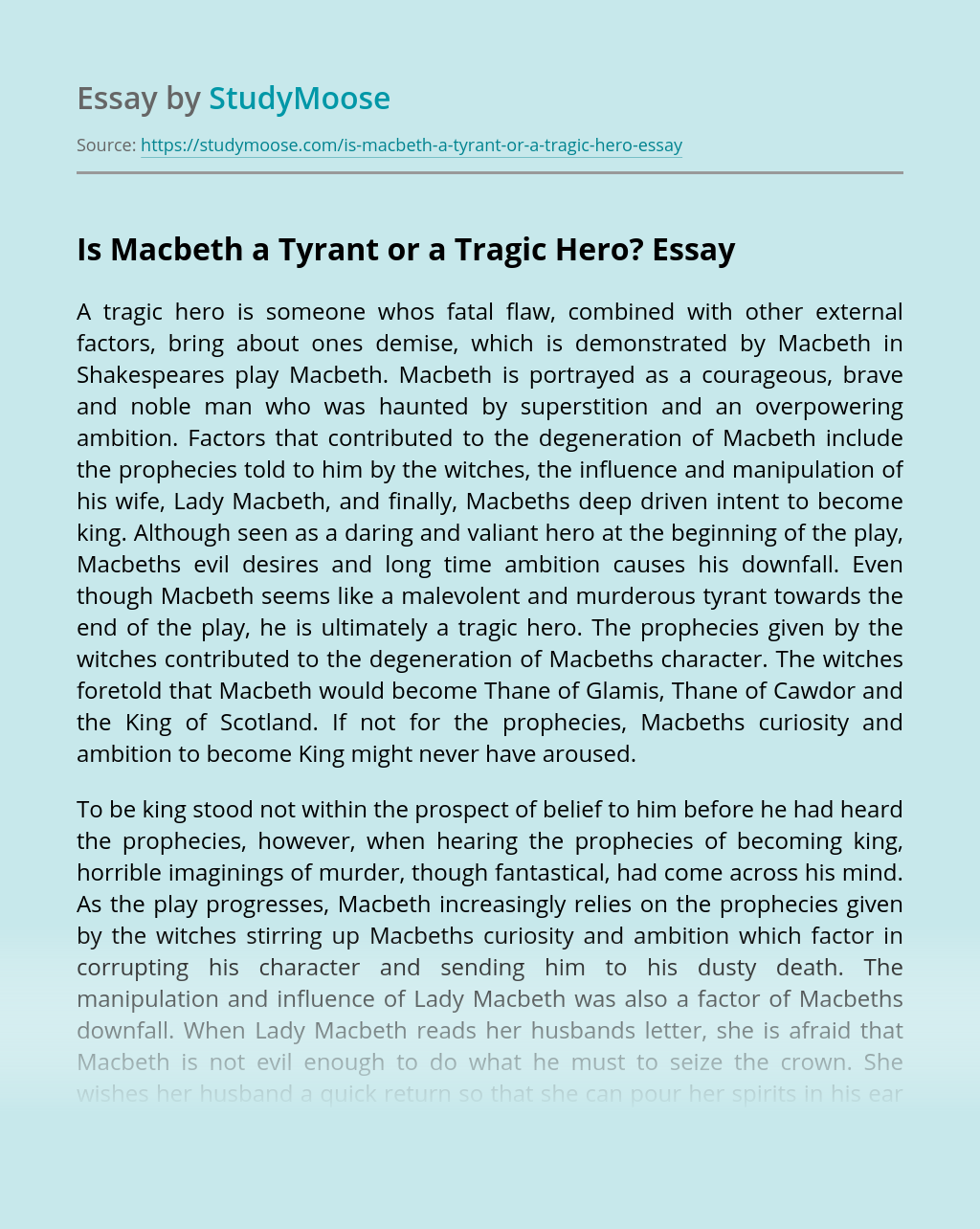