Death of a Salesman and All of My Sons, two different plays written by distinguished playwright Arthur Miller, yet the two main characters Joe Keller and Willy Loman are notably identical to one another. Although both are not faced with similar situations, both Keller and Loman handle their situations with an ignorant and shallow mindset towards the world. Keller and Loman have significant tragic flaws which ultimately lead to their demise. Both characters are unable to accept reality the way others are capable of, the “American dream” has been corrupted and misinterpreted in their feeble minds, and abandonment has plagued them throughout their lives.

Don't use plagiarized sources. Get your custom essay on
“ Comparison of Joe Keller’s and Willy Loman’s Plays ”
Get custom paper
NEW! smart matching with writer

The “American dream” seems to play a monumental role in distinguishing what is essential to be successful. Joe Keller believes that his son, Chris, deserves the business he built from the ground, up and does absolutely everything in his power to ensure that Chris will obtain Joe’s business. In Joe’s eyes, risking the lives of soldiers, making an abomination out of his former “best friend”, and separating a family in order to keep his business running smoothly is deemed more worthy than doing the right thing.

Joe feels that he has done the right thing because he carried out these actions for his family.

Willy Loman’s interpretation of the “American dream” is a tad bit more extravagant; Willy believes that the key to success is a matter of whether a person is well-liked or not. Throughout the course of his professional career as a salesman, Willy constantly concocts lies stating how he is well-liked all over the Northeast, as well as his weekly salary.

Willy also tried to bring the dream upon his son Biff. While Willy’s son Biff was a student in high school, Willy continuously fed Biff these fantasies that one day, Biff would become a great football player. Willy preferred brawn over brains in Biff. Willy was unable to live the American dream and thus ventured on through Biff vicariously. When Biff decided not to finish summer school and then explore new endeavors out west, Willy began to grow furious with Biff because he was unable to hover over Biff and “lead” him toward success.

In All of My Sons, Joe Keller is unable to perceive reality with his involvement in the busted airplane heads which led to the death of twenty-one soldiers of the Air Force. We the readers notice that the lie Joe tells to others has been so commonly practiced that it’s no longer a fabrication of Joe’s imagination, but in his opinion, the genuine truth. Joe becomes obsessive over Chris inheritance of Joe’s business and it seems as though he does this so that in the event that someone reveals the truth to Chris, there is no possible way that Chris could be ashamed after what his father did for him. Unfortunately for Joe, the truth is revealed too soon and Chris no longer is willing to follow in his father’s “murderous” footsteps; instead Chris is enraged by his father’s past actions and vows to either turn his father in or kill him.

Willy Loman is beaten down by his failure of him and his son to live up to his expectations. Unlike Joe, Willy’s altered perception of reality conflicts with his everyday life. He is over exhausted and constantly has flashbacks which deceive Willy’s perception of reality. His flashbacks usually consist of Willy’s overbearing confidence in Biff’s future.

Willy also has flashbacks where his successful brother shows up. To stack himself up against his brother’s success, Willy lies about how his business is prospering and how he nearly at the top of the metaphorical food chain in the sales world. In reality however, Willy is a struggling business man who barely makes ends meet. He needs to ask his friend Charley for money just to pay bills and make it seem like he is still making money so he is not a failure in the eyes of others. Willy resorts to these flashbacks when he faces adversity or when things are no longer in his control.

Another common theme that leads to both characters fatal demise is their life of abandonment. Joe Keller faced abandonment from his sons Chris and Larry. Chris stood by Joe until he figured out Joe’s lies and mishandling of his business. Joe caused the death of twenty-one other soldiers to Chris and Joe could not be forgiven. Chris abandoned him and was even willing to let Joe rot in prison for the rest of his life.

Larry, although now deceased, also abandoned Joe. After hearing news that Joe’s business was responsible for the deaths of his comrades in the Air Force, Larry decided to take his own life because he could not bear the fact that his father had done such a terrible thing. Chris read Larry’s suicide note to his father and this ultimately lead to Joe finally succumbing to all the pressure around him and forced him to end his life. Joe’s mistakes led to those around him abandoning him in the end, even though he did everything in his power to keep his loved ones surrounding him.

Willy Loman’s whole life was masked by abandonment. Willy grew up without ever really knowing his father, his brother and role model could care less if Willy were to rot in Hell, and most importantly to him, his sons seem to be embarrassed by him and refuse to stand by him through all of his troubles. Also his boss, Howard, fires Willy when Willy is no longer of use to him and can no longer contribute positively towards the sales company.

When at the restaurant, Willy’s son Happy goes as far as to say that Willy is not his father when trying to “pick up” a bunch of girls to later sleep with. Biff abandon’s Willy in the sense that Willy is trying to escape reality and that Willy is not extraordinary, but merely ordinary. Willy, with all his loved ones no longer standing by his side, decides to end his life and make one final attempt at fulfilling the American Dream by collecting life insurance to help support Biff start up a business that Biff is unwilling to succeed in.

Both Joe Keller and Willy Loman were both the typical, hard working Americans. Unfortunately for them, they both contracted horrific tragic flaws which the common person can relate to. Their incapability to properly perceive reality, their misinterpretation of the American Dream, and the constant abandonment they had encountered ultimately led to their own demise. 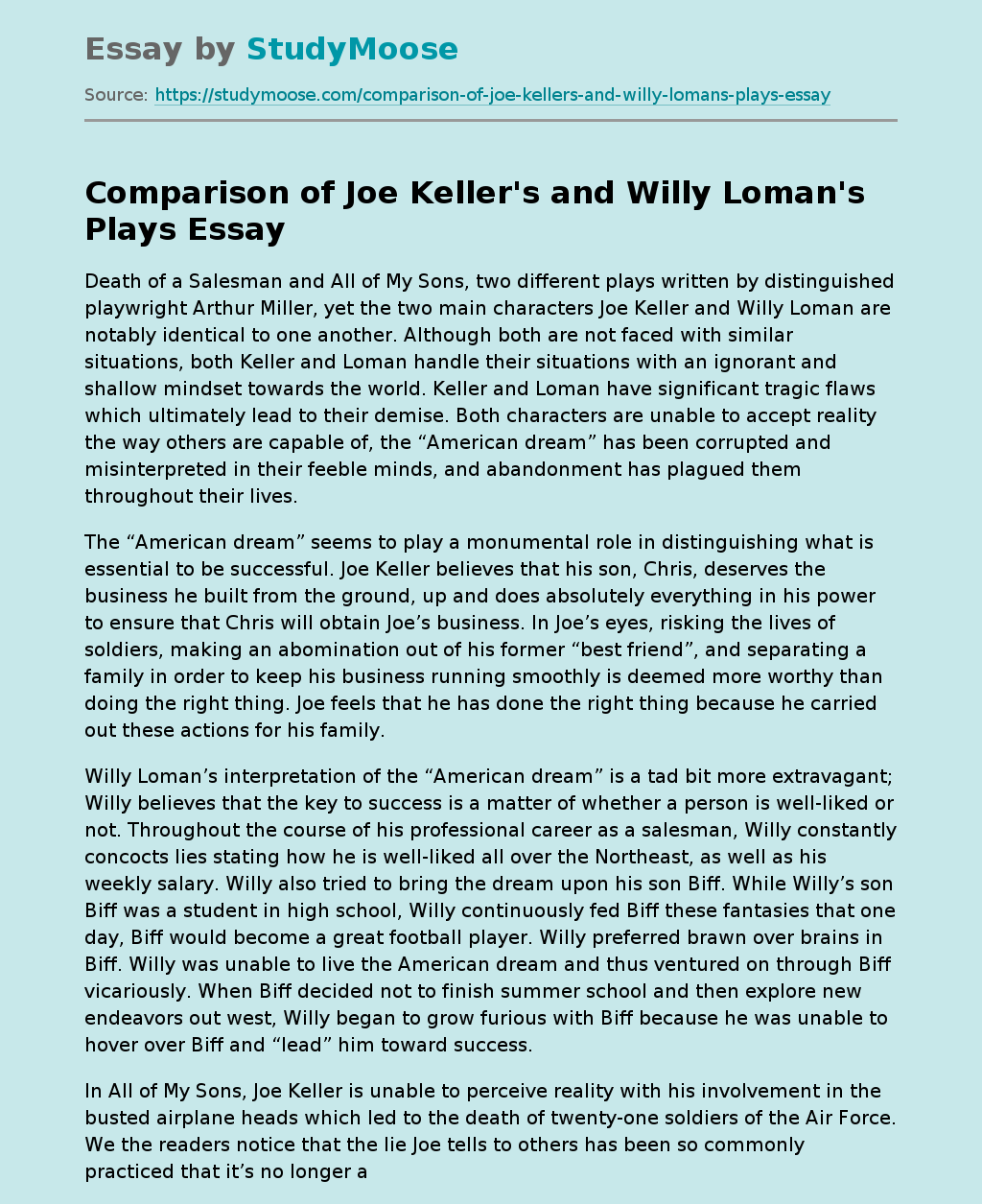