Theme of Inaction in Hamlet

Hamlet, the titular character of the Shakespeare play, is one that, like many tragic heroes, has a tragic flaw. This hamartia eventually leads to his downfall, as a result of the circumstances he places himself in. Hamlet’s tragic flaw of inaction leads to his death by Laertes hand, as he is consistently unable to kill Claudius despite occult intervention, the slaying of Polonius, and the eventual climax of the duel.

Near the beginning of the play, Hamlet is approached by the ghost of his slain Father.

The specter urges Hamlet to take action against Claudius, who murdered him in his sleep. Hamlet appears forthcoming about his desires for revenge: “Haste me to know’t, that I, with wings as swift as meditating, or the thoughts of love, may sweep to my revenge.” (1.5.29-31). He now has a purpose to seek, the revenge of his father’s death. However, this bravado quickly sours as throughout the following scenes Hamlet constantly delays his task.

Simply put, Hamlet could walk into the palace and slay Claudius where he stands, but to Hamlet, this is not the manner of which he would handle this task. He begins to devise a plan: “As I perchance hereafter shall think meet to put an antic disposition on, that you, at such times seeing me, never shall with arms encumber’d thus, or this head-shake, or by pronouncing some doubtful phrase…” (2.1.170-175).

Here Hamlet states his intent to feign madness. What purpose does this serve in his quest to kill Claudius? To Hamlet, he believes that acting as a madman will give him more ground to investigate the crime, as no criminal would be scared of the delusions of a crazed man.

But to the common reader, one could see this as a ploy of a man who does not know where to go. The purpose of feigning madness seems scant when the goal is to prove a dastardly deed has been committed and to punish the deviant. Hamlet’s uncertainties are numerous in this portion of the play, and he expands his “plan” to a group of actors: “You could, for need, study a speech of some dozen or sixteen lines, which I would set down and inset in’t, could you not?” (2.2.541-543).

This is the final stage of Hamlet’s “Preparation Procrastination”. He does not trust the ghost’s word, and thereby must get definite proof that Claudius is guilty by recreating the crime in a play and watching for Claudius’s reaction. A rational ploy, it seems, but in perspective this is a weak and flimsy plan that could provide ill fitted truths. The public recreation of a crime in hopes that Claudius will incriminate himself almost seems like Hamlet wishes the public would rise up and overthrow Claudius for him. In conclusion, this portion of the play is essentially Hamlet delaying his task by ensuring he is just in carrying it out.

Hamlet slays himself when he slays Polonius. This event and the circumstance surrounding it embody Hamlet’s hamartia and are the catalyst that lead to his downfall. Just prior to this scene, Hamlet finds a vulnerable Claudius bowed in prayer. “Now might I do it pat, now a’ is a-praying; And now I’ll do it, and so he goes to heaven, And so am I reveng’d.” (3.3.73-75). Hamlet makes an excuse. He finds a perfect opportunity to perform the goal he has took upon himself and yet cannot do the deed. This demonstration of his weakness in the circumstance of Claudius’s vulnerability in this moment, his failure to act, is key in his eventual death. In every instance Hamlet has failed to act, his doom takes a step closer. This internal struggle conflict is rife throughout the play, displaying itself repeatedly in various soliloquys. “Thus conscience does make cowards of us all and thus the native hue of resolution is sicklied o’er with the pale cast of thought, and enterprises of great pitch and moment with this regard their currents turn awry, and lose the name of action” (3.1.83-88).

This quote does an excellent job of summarizing Hamlet’s fatal flaw. Although fully aware of his uncle’s misdeeds, his conscience makes a coward of him. Hamlet’s fate is fast approaching, but the point of no return arrives when he slays Polonius. “O me, what hast thou done?” “Nay, I know not, is it the king?” (3.4.25-26). Hamlet has killed the wrong person. Desperately exclaiming his hope that maybe it was the king wrapped in the curtain, he finds, to his disappointment, it was but his lackey, Polonius. Hamlet’s fate is now sealed. Due to his procrastination, and his own self-awareness of it, he desperately swung his blade into the first thing his desperate mind took for a villain. This action summons Laertes back from France, the man who will eventually slay the slayer.

The final battle between Laertes and Hamlet is the one that kills him. This happens as a direct result of the death of Polonius. Polonius’s death happens as a result of Hamlet’s tragic flaw, his failure to act. It is his failure to slay Claudius when he finds him vulnerable to leads him to kill Polonius. As the duel approaches it becomes clear the Hamlet’s fate is sealed: “And for that purpose I’ll anoint my sword, I bought an unction of a monteback, So mortal that but dip a knife in it, Where it draws blood… can save that thing from death” (4.7.140-145). Hamlet’s downfall is planned, and we understand that during the circumstance of the duel, which is approaching, Hamlet will more than likely die. The duel is fought and Hamlet is mortally injured, he finally performs the task of killing Claudius: “Here, thou incestuous, murderous, damned Dane, Drink off this poison. Is thy union here? Follow my mother.” (5.2.320-323).

Hamlet’s goal is finally achieved, Claudius is slain, however so is he. His downfall has not come entirely to fruition, and he right before he passes, he manages to finally win his revenge. As Hamlet passes, he says to Horatio: “O God, Horatio, what a wounded name, things standing thus unknown, shall live behind me. If thou didst ever hold me in thy heart, Absent thee from felicity a while, And in this harsh world draw thy breath in pain, To tell my story.” (5.2.341-346). Hamlet, knowing that his quest is over, and his downfall has come, begs Horatio to tell the true tale of what he wished to accomplish. He expresses remorse because he is aware of all the chances, he had to kill Claudius, which he passed on, and now he must pay the price of his tragic flaw with his own life.

In summary, Hamlet’s tragic flaw rests in his inability to kill Claudius. This eventually leads to his downfall, as he goes over the edge, kills an “innocent” man and thereby signs his own death warrant. The various circumstance present to him a multitude of chances to complete his quest, but alas, Hamlet cannot do it before the hourglass runs out. He is slain by Laertes during the duel and afterwards expresses regret that he is to pass from the world with nobody knowing the true tale. Hamlet’s hamartia sends him to his grave.

Theme of Inaction in Hamlet. (2017, Jan 25). Retrieved from https://studymoose.com/theme-of-inaction-in-hamlet-essay 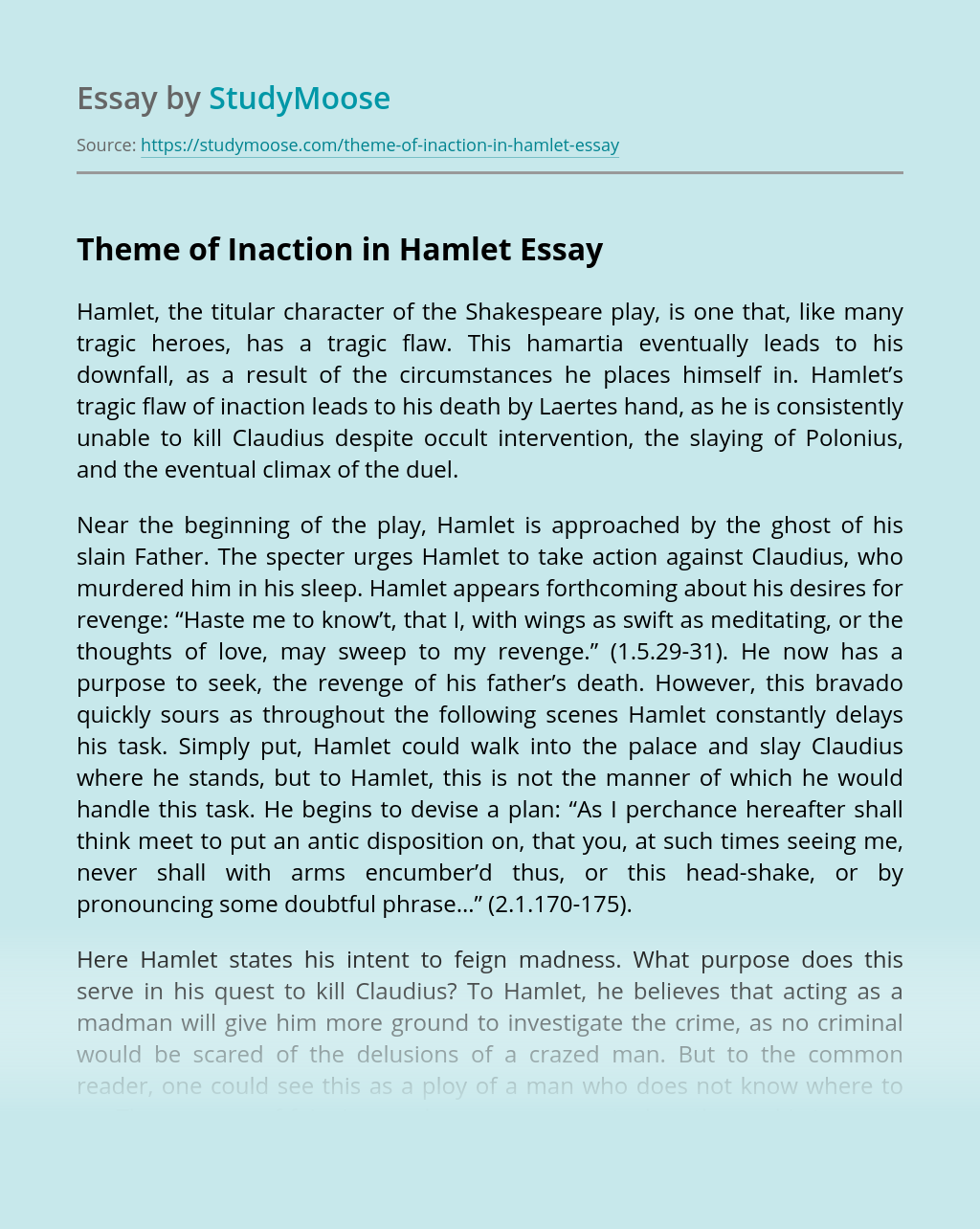 The Theme of Indecision in Hamlet

The essential component to any tragedy, Greek or Shakespearean, is a protagonist with a fatal flaw. In Greek tragedy this is called hamartia. This Latin term translates directly into the word “flaw” but is usually used to describe an excess of a personality trait – virtue or vice. The protagonist’s fatal flaw pushes the the...

Compare and Contrast the Ways in Which Shakespeare and Webster Present Hamlet and Bosola as Tragic Heroes.

Bosola from Webster’s The Duchess of Malfi and Hamlet from Shakespeare’s Hamlet, both present elements of Aristotle’s model of the tragic hero; through both of the characters, Shakespeare and Webster use the features of the tragic hero to engage Elizabethan and Jacobean audiences in an exploration of issues linked to the Renaissance, religion and philosophy....

Get Essay
Theme of Revenge in William Shakespeare's Play Hamlet

Death theme In the play "Hamlet" by Shakespeare

Death has always been the most debated subject regarding humans belief. It is part of life, yet a mystery nobody has experienced to tell. It is said to drive people’s actions, however Death is still a mystery as the whole human race still wonders how it acts on people’s lives and what is next after...

Characterization of Hamlet, Gertrude and Ophelia

Hamlet is a character of extraordinary complexity and depth. No simple formula can serve to solve his mystery. A different Hamlet might have killed his uncle Claudius on the strength of the Ghost’s accusation, ascended the throne, married Ophelia and lived happily ever after . But such a typical hero was not likely to be...

The Theme of Ambition in Macbeth, a Play by William Shakespeare

Ambition With respect to physics, when a building is constructed too high and lacks a robust foundation, it is destined to topple. Such behavior corresponds to humans and their ambition. In the play, “Macbeth,” Shakespeare establishes the universal theme that too much ambition can lead to a great fall. He successfully does this by using...