Hamlet and his Tragic Flaw

Question: Does Hamlet have a tragic flaw? If so, what is it and how does it effect his surroundings and how does it effect Hamlet himself? What is the outcome of his flaw? Hamlet has a tragic flaw in his personality and behavior. His flaw is that he is overly concerned with death and tragedy. This flaw or weakness in Hamlet leads him into a world of chaotic surroundings and madness.

Don't use plagiarized sources. Get your custom essay on
“ Hamlet and his Tragic Flaw ”
Get custom paper
NEW! smart matching with writer

Hamlet’s flaw and his mad personality led to the death of several people, including his mother and the King of Denmark! If Hamlet did not have this fascination with death and tragedy, the deaths of the several people would not have occurred including his own. Hamlet did not always have this flaw in his personality. The flaw was presented to him by a ghost.

The ghost of Hamlet’s father told Hamlet that he was murdered by Claudius and asked Hamlet to avenge his murder. This is where the flaw is adopted by Hamlet and begins to effect his life. Hamlet begins to dig deeper and deeper to find the truth. He puts on an act of madness to disguise his revenge. Hamlet becomes so over-whelmed with death that death is all he thinks or cares about. The death and deception burn into his heart like a hot branding iron to a steer. Hamlet’s flaw is intact.

Hamlet has a friend, Horatio, who knows of the murder of Hamlet’s father. Hamlet could trust Horatio with his plans and opinions. Horatio acted as an advisor to Hamlet, but he did not tell Hamlet that he was heading in the wrong direction. Because of this Hamlet’s heart pounded hard with the thought of revenge. The flaw was there and the stage was set for tragedy. There was no way for Hamlet to change his destiny. “Haste me to know ‘t, that I, with wings as swift As meditation or the thought of love May sweep to my revenge.” Hamlet’s surrounding are increasingly affected by his flaw. Hamlet begins to forget all important obligations in his life and neglects his responsibilities, causing other problems. One very important commitment Hamlet has which he lets go is his relationship with Ophelia. Ophelia becomes very confused and hurt. Hamlet hurts her in a couple of ways. First, he neglects her, and second, he insults her. “Ha, ha! Are you honest?…Are you fair?…That if you be honest and fair, your honesty should admit no discourse to your beauty. …I loved you not…Get thee to a nunnery.” Then Hamlet kills Polonius, Ophelia’s father, which in turn makes her go mad and in her madness she commits suicide. Hamlet loses objectivity. He does not respect the King nor his mother’s feelings. Hamlet meets with his mother and insults her. He calls her a whore and a sinner for marrying a murderer. Since he knows that the King is a murderer, he attempts to expose him. Hamlet stages a play in which the players act out the scenes of King Hamlet’s murder. This greatly upsets the new King and the King adopts some of Hamlet’s obsessions with death and begins to think of a way to get rid of Hamlet. All of the deaths in the play occur because of Hamlet’s actions and his fascination with death. Ophelia dies because Hamlet kills Polonius. This drives Ophelia mad and then she commits suicide. I think she saw the truth of the treachery that was going on and thought that her death would be the better course of action. The King plots to kill Hamlet in a duel between Laertes and Hamlet. The tip of Laertes rapier was poisoned. He cuts Hamlet and then Hamlet gets Laertes’ poisoned rapier and cuts Laertes. They both will die. Then Hamlet was supposed to drink out of a poisoned glass of wine but doesn’t, so his mother does and she dies. The truth comes out. Hamlet then goes and stabs the King and pours poison down his throat. He dies. Then Hamlet and Laertes die from the poison. Horatio is left standing alive. Hamlet’s actions have killed all the nobility in Denmark. If Hamlet did not have this fascination with death and tragedy, the deaths of several people would not have occurred, including his own. If Hamlet did not pursue his flaw and had chosen a different path, perhaps his life wouldn’t have ended in tragedy. The theme of the play is tragedy leads to chaos and chaos leads to death; and life cannot exist without the three. It is a cycle and Hamlets’ flaw causes his cycle to become shortened. “O, I die, Horatio!”

Hamlet and his Tragic Flaw. (2020, Jun 02). Retrieved from http://studymoose.com/hamlet-and-his-tragic-flaw-new-essay 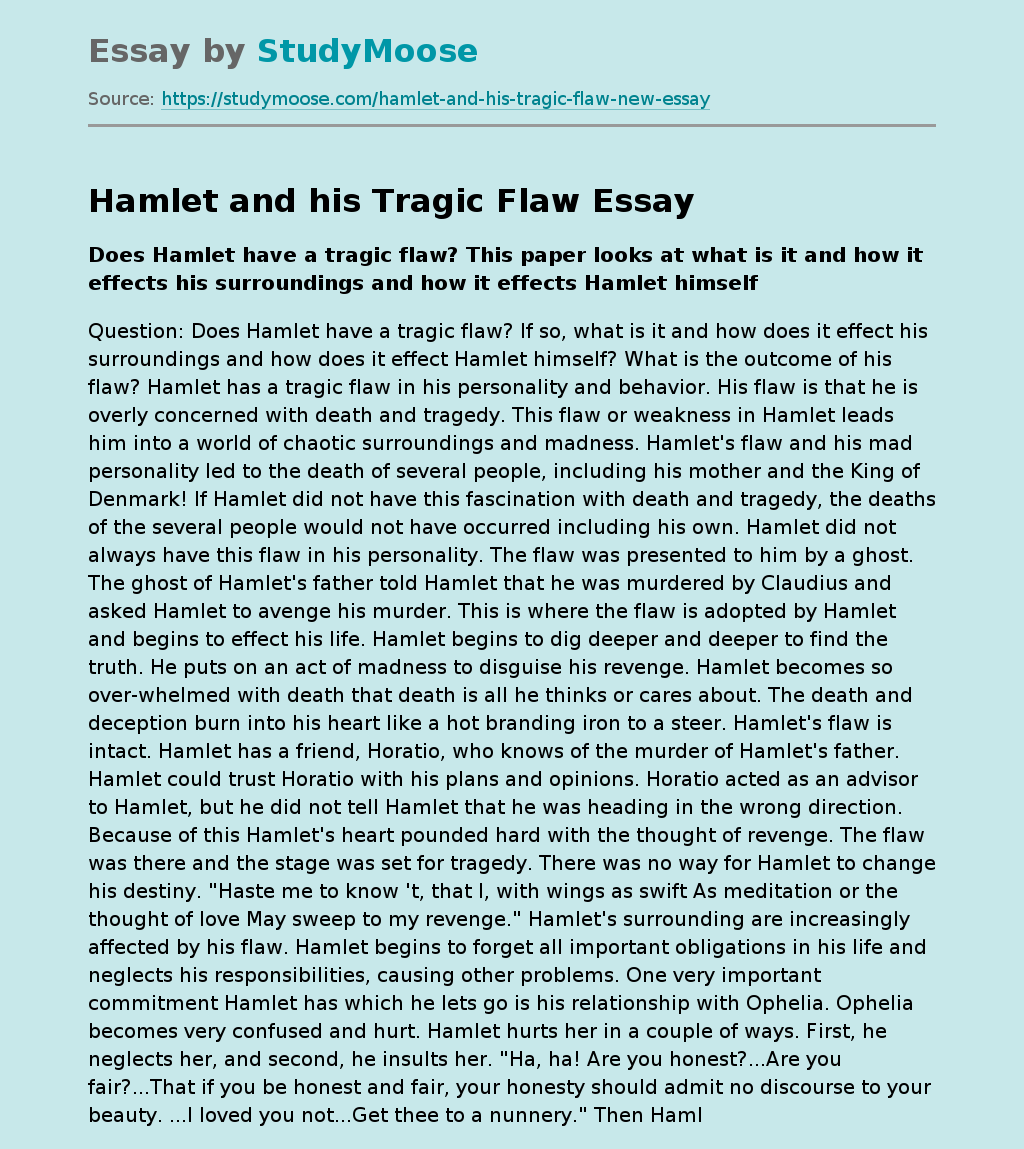