"The Great Gatsby" and Its Fatal Flaw of Love

In classic love stories, it is easy to say love always has a positive change. Love can change even the most villainous figures, such as Maleficent, whose love for Sleeping Beauty created empathy in her. However, many can agree that love can be a double-edged sword and there are some romance stories where love can change someone to something far cruder. While F. Scott Fitzgerald’s novel, The Great Gatsby, may not be a classic love story, the novel successfully demonstrates how love can be a powerful agent for change through the relationships of Daisy Buchanan, George Wilson, and Jay Gatsby.

Don't use plagiarized sources. Get your custom essay on
“ “The Great Gatsby” and Its Fatal Flaw of Love ”
Get custom paper
NEW! smart matching with writer

Daisy Buchanan may be described as a protagonist whose lack of real love changes her. Daisy designates herself as this innocent character from the beginning such as consistently being associated with the colour white, however, the readers learn further on that her character can be quite greedy. Gatsby, who spent his entire life waiting for Daisy, is rejected because of his form of wealth.

He states, “She never loved you, do you hear?” he cried. “She only married you because I was poor and she was tired of waiting for me.” (Fitzgerald 131) Furthermore, this also showcases Daisy’s lack of love in her relationships and how wealth has extreme importance to her. In fact, as the story progresses, the readers are also informed of the infidelities of her husband and how Daisy never decides to do anything about it. Not only does it inform the readers of her love for this luxurious life, but it also indicates the lack of love Daisy felt with Tom.

In terms of honesty, Daisy has also filled her life with lies. She lies about never loving Tom and proceeds to cover her statement with more lies by stating she loves Gatsby too. “Even alone I can’t say I never loved Tom.” She admitted in a pitiful voice. “It wouldn’t be true.” (Fitzgerald 133). This drastically changes her life and forces Daisy to lie in order to keep herself safe. Her dishonesty is guided by her selfish love, and thus, her dishonesty has tied directly into her careless nature. Along with that, Daisy has also become a careless person. Nick describes her and her husband by stating, “They were careless people, Tom and Daisy- they smashed up things and creatures and then retreated back into their money or their vast carelessness or whatever it was that kept them together, and let other people clean up the mess they had made.” (Fitzgerald 170). As a result, Daisy does not attend Gatsby’s funeral and she never clears up what actually happened nor does she tell Tom the truth. This immense damage that Nick states is what makes Daisy careless. Her carelessness changed her life drastically, and it is because of her relationships that lacked love. It is through these traits that Daisy’s white purity may actually represent her lack of love, an empty slate. Similarly to other people such as George Wilson.

"The Great Gatsby" and Its Fatal Flaw of Love. (2021, Feb 03). Retrieved from https://studymoose.com/the-great-gatsby-and-its-fatal-flaw-of-love-essay 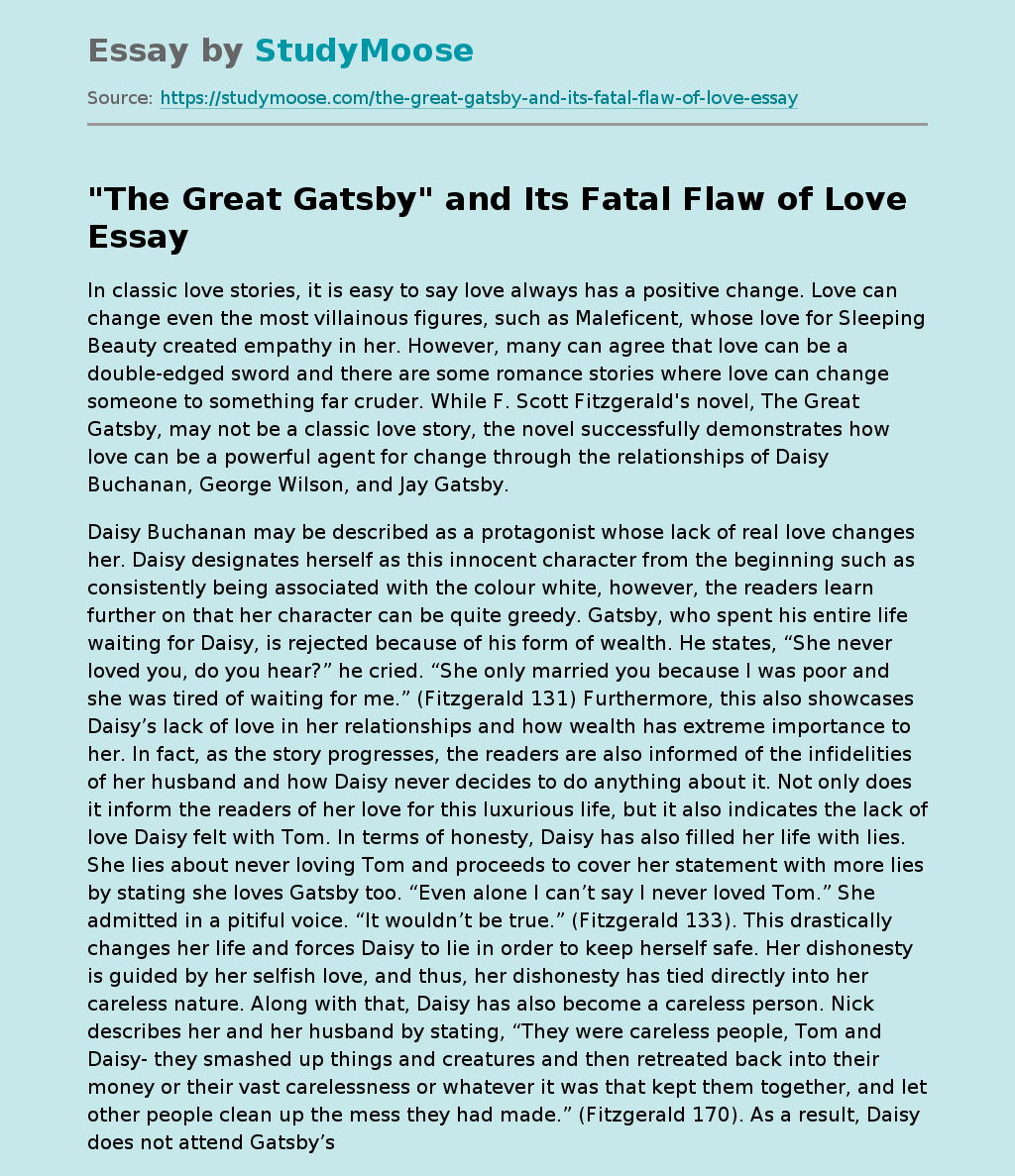