Love and its Deadly Corruptors in " The Great Gatsby"

There are a myriad of meanings that the word “love” now bears. There are divergent ways of expressing it and ways it can be interpreted throughout various countries and their cultures, however, the most prominent way love is introduced typically comes to be literature. Over the years, a mass of people have argued that F. Scott Fitzgerald’s The Great Gatsby is, at its core, an illustration of the ‘Great American Love Story’, but it is, simply, not. The Great Gatsby was never meant to be another story of perfect love.

Don't use plagiarized sources. Get your custom essay on
“ Love and its Deadly Corruptors in ” The Great Gatsby” ”
Get custom paper
NEW! smart matching with writer

The work displays a cynical viewpoint of Romance and the American Dream, through the main characters’ Daisy and Jay Gatsby’s relationship, finding solid evidence that it is not a passionate adventure it is a tale of lust and love combined, working together in corrupting individuals in their lives and statures, and of an American Dream that individuals yield to unknowingly throw lovers apart. The novel refuses to illustrate a complete whirlwind of incessant love, and acts upon the catastrophes both the individuality of aspirations, and of failing to move beyond the past, displaying romance as the cause of its own death, therefore dividing the center couple as well as providing those close with split moral dilemmas.

Foremost, Jay Gatsby and Daisy’s relationship prominently investigates the death of romance through love, when one fails to see beyond the past. In Gatsby’s case, his goal is to turn back time, to go back to his days in Louisville, when he first met Daisy, before everything had slipped past his wandering eyes – the war, Daisy being married, his corruption, back when America was his own idealistic land of prime opportunity – hence, he does all he can to ensure this becomes the only outcome after they are reunited.

While others are unsure about his choices, ‘ ’I wouldn’t ask too much of her,’ I ventured. ‘You can’t repeat the past.’ ’Can’t repeat the past?’ he cried incredulously. ‘Why of course you can!’ ‘ (110), Gatsby’s relentless pursuit of the past snares his mind in the belief that his plans are foolproof – nothing could possibly go wrong because, to him, it is what is meant to be. However, while Gatsby makes substantial sacrifices in his life while in pursuit of Daisy, he is not simply giving up parts of his life for her – instead, he changes who he was, and his inner personality, becoming a member of higher society so that he feels worthy of Daisy’s love, and subsequently isolates parts of her new lifestyle in order to further the belief that she remains the same woman he had met years ago. Daisy, although appearing charming as ever, plainly disappoints Gatsby – his false image of her after several years now expands so much larger than life. Within the moment of the purest realization, Nick Carraway finds that “the expression of bewilderment had come back into Gatsby’s face, as though a faint doubt had occurred to him as to the quality of his present happiness … there must have been moments even that afternoon when Daisy tumbled short of his dreams … ” (95). Daisy falls short of his ideals, as at the end of the day, she is only human – she follows her aspirations yet still moves on, while Gatsby heads off to war and refuses to forget what he believes to be the most important times of his life. And once he realizes that she has changed, he can never come to accept it. He had “been full of the idea so long, dreamed it right through to the end … Now, in the reaction, he was running down like an over-wound clock.“ (92). Naturally, Gatsby is obsessed with Daisy, unable to imagine his life without her in it. By the time he returns from everything he had endured, Daisy had transformed to an embodiment of his dreams, even more than she is a real woman, and as such, he cannot admit that she has made decisions that don’t follow a similar obsession with his person, ones outside their love. In essence, he laments of a past he craves to precur once more.

Furthermore, with a heavier focus upon the viewpoints and opinions of Daisy Buchanan, it is shown that The Great Gatsby refuses to illustrate a complete sense of ceaseless love, such as what would be found if the novel were the truest form of a love story. Although Daisy does claim to love Gatsby, she also refuses to admit that he is the only man she presents affection for, expressing that he wants “‘too much!’ she cried to Gatsby. ‘I love you now – isn’t that enough? I can’t help what’s past.’ She began to sob helplessly. ‘I did love him once – but I loved you too.’ (132) and as such, it is difficult to accept their relationship as true love, as it is not exclusive. It has been years since their separation, and Daisy set to preserve her own version of the American Dream, by moving on from Gatsby and settling with another man of wealthy stature. Clearly, she has some experience her newfound area, and previously implies that the world is no place for a woman of any nature the best she can do is hope to survive and the preferred way to do that is through the attractions of the beauty and body, rather than mind. However, regardless of her own beliefs and needs, in the end she has such destroyed Gatsby’s own misconceptions. The two conflict because of their lives since their meeting in Louisiana – Gatsby has failed to move past while Daisy easily slipped into a new life that wrapped around survival, immensely benefitting herself.

Ultimately, Gatsby and Daisy’s shattered romance negatively affects various other characters as well, involving them within heavy moral dilemmas that tear apart both themselves and the relationships they form throughout the novel. Nick Carraway recognizes the faults in their relationship immediately, primarily noting that Gatsby “must have felt that he had lost the old warm world, paid a high price for living too long with a single dream…looked up at an unfamiliar sky through frightening leaves and shivered…” (161). He views their mistakes first – hand, yet fails to help them past, instead opting to watch in a morbid interest. This is strictly apparent in Gatsby’s choices, as he notices that “He talked a lot about the past, and I gathered that he wanted to recover something, some idea of himself perhaps, that had gone into loving Daisy. His life had been confused and disordered since then, but if he could return to a certain starting place and go over it all slowly, he could find out what that thing was … “ (110). Nick’s derivative of the American Dream comes in the form of watching, not participating. These actions create a lifestyle where he cannot do anything that fails to revolve around the two struggling suitors. As such, once their affair ends in a glorious, fractured blaze of turmoil, so does his own life, in specific terms the relationships he had formed. Throughout the work he came to interact closely with Jordan Baker, a woman who, similarly to the man himself, found herself entangled with both sides of Gatsby and Daisy, albeit centered around the latter. Ironically following the people they come to support, Jordan and Nick begin a slow, weak relationship for the summer, yet in the end, it falls quickly after Daisy and Gatsby’s does. This results from a lack of purpose – without people to keep them close, Nick drifts apart, helping Jordan to realize that there was no true person within Nick, past the facade he had created in the wake of other’s drama. She had created huge misconceptions with his character, and “Well, I met another bad driver, didn’t I? I mean it was careless of me to make such a wrong guess. I thought you were rather an honest, straightforward person. I thought it was your secret pride” (177). Simplified, Daisy and Gatsby’s mistakes took a toll upon all who found themselves close – Nick followed their actions with rapt attention and failed to keep track of his own lifestyle, while Jordan strayed along the outside, pushed around from person to person without a reason to deny.

F. Scott Fitzgerald’s work showcases how time and individuality kickstarts the corruption of what once was a soft passion towards another Gatsby expects results with no plan – to have the past to repeat itself and Daisy to resume her “love” for him, as before the war. He wants her to leave Tom and admit to only ever having feelings for him. Daisy is realistic, but as a temptress she can only do what she finds best: tempt men to hold her place in her society, her dreams. Daisy is a woman coy and curious, lured to others by money more than sincere love. She might possibly have legitimate feelings for Gatsby, but she seizes enough common sense to understand that she cannot act upon them, as she is already married, has moved past whatever men in her life came before Tom. In the end, both parts of the couple fail to see the truth behind their dreams – Gatsby was unable to look through his dream and see the real Daisy. Daisy, subsequently, found herself similarly unable to look through her own dream, and see Gatsby as an intelligent man, one who was able to gain wealth and could have provided her with the level of luxury she wished so desperately. Each character had their own, separate opinion on the American Dream and Romance. And this result led to individual actions taken without proper precaution, and ultimately failed results on all ends. Love and aspirations were seen by the author as mannerisms which people can never act upon correctly.

Love and its Deadly Corruptors in " The Great Gatsby". (2021, Feb 03). Retrieved from https://studymoose.com/love-and-its-deadly-corruptors-in-the-great-gatsby-essay 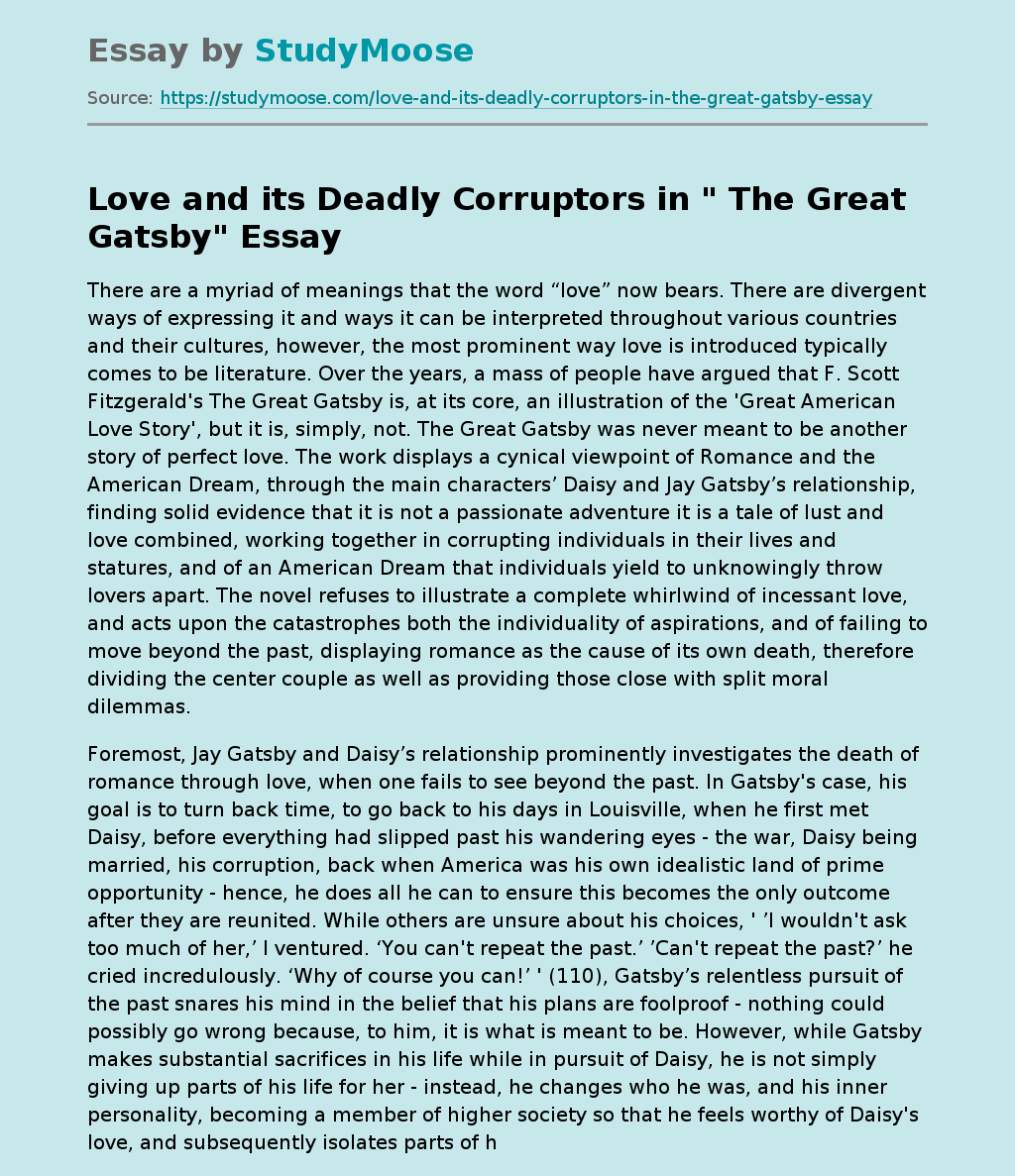