Love and Relationships in The Great Gatsby

Love is everywhere, it is the muse for the poets and songwriters and the main focus of screenwriters. It what sells billions in jewelry sales each year. Love is romanticized in our society, especially the idea of pure love. In F. Scott Fitzgerald’s The Great Gatsby, love and relationships are the center focus of the plot; the main selling point of the book is a beautiful and tragic love story that transcends decades. This romantic aspect appeals to readers who are looking for an example of this coveted pure love.

Don't use plagiarized sources. Get your custom essay on
“ Love and Relationships in The Great Gatsby ”
Get custom paper
NEW! smart matching with writer

Daisy and Gatsby’s relationship is a prime example of this fake love. At first glance, Gatsby seems to be simply consumed with love for Daisy. This is shown when she visits his house for the first time: “ he revalued everything in his house according to the measure of response it drew from her well-loved eyes” (96-97).

Gatsby’s actions are completely driven by how much closer it can get him to reach his goal of being together with Daisy forever. However, his view of Daisy is not that of a real woman, but of a fantasy one:

He knew that when he kissed this girl and forever wed his unutterable visions to her perishable breath, his mind would never romp again like the mind of God.

So he waited, listening for a moment longer to the tuning fork that had been struck upon a star. Then he kissed her. At his lips’ touch, she blossomed for him like a flower and the incarnation was complete. (117)

Love is a strong force that will cause people to do and think many extreme things, but Gatsby sounds completely deranged. Right away, it is clear that Gatsby’s vision of Daisy is extremely misogynistic. He compares her to a flower, something that is supposed to be looked at and adored for its beauty. It is something that you have to treat delicately so it is not ruined forever. This is how Gatsby sees Daisy, maintaining only superficial love for her and in essence, objectifying her. However, Gatsby’s supposed love for Daisy digs deeper than that, revealing a relationship built on false pretenses. Daisy is the first person that Gatsby falls in love with as a very young man, and like most first loves he becomes immediately attached to her. But unlike other first loves, Gatsby does not let go of Daisy. He sets up his whole life to revolve around Daisy, starting with his internal vow to become rich and come back to her. He makes Daisy into a god, and the goal of being with her is his religion. She is the one who will make all of his stars align. By being his sole focus in life Daisy is the meaning for Gatsby to live, representing all of Gatsby’s hopes and dreams. This is a wholly unrealistic expectation to place on a human who cannot ever be perfect. Essentially, Gatsby is idealizing Daisy, unable to separate the person that he fell in love with and the person that Daisy is now.

Following Daisy’s feelings in Gatsbys and her relationship, Daisy seems to be totally infatuated with Gatsby, always showing her love with little actions like “pull[ing] his face down kissing him on the mouth” (122) or telling him “you know I love you” (123). However, Daisy is not truly in love with Gatsby, she claims: ‘I love you now—isn’t that enough? I can’t help what’s past.’… ‘I did love him once—but I loved you too.'(139-140). Daisy loves Gatsby, but she also loves Tom. Unlike Gatsby, she cannot choose a one true love, as she still values Toms love just as much as Gatsby’s. Daisy also seems to have other motivations for pursuing a relationship other than love. When she visits Gatsby’s house for the first time, an odd scene unfolds: “’They’re such beautiful shirts,’ she sobbed, her voice muffled in the thick folds. ‘It makes me sad because I’ve never seen such – such beautiful shirts before'(98). Daisy is an extremely materialistic character, she married Tom because he was the first man that she met that could give her all the financial stability that she was used to. So when Daisy sees all the beautiful shirts, she is realizing the amount of wealth that Gatsby has. She becomes excited, fulfilling her little materialistic heart but simultaneously becoming saddened by the thought of what could have been. Daisy regrets the fact that she did not wait for Gatsby, and is disheartened by the fact that Gatsby’s newfound wealth has come too late. Daisy’s actions are not driven by love, they are driven by greed. She works for her own incentives, and as Nick describes she “smashed up things and creatures and then retreated back into their money or their vast carelessness”(187-188). Daisy does not love sincerely, she just exploits the love that people give her to feed her selfish nature.

Another person who clearly does not act for love is Myrtle Wilson. This is expressed when she discusses her marriage to George Wilson:

‘The only crazy I was was when I married him. I knew right away I made a mistake. He borrowed somebody’s best suit to get married in and never even told me about it, and the man came after it one day when he was out….then I lay down and cried to beat the band all afternoon. (39)

Just like Daisy, Myrtle is extremely materialistic. When she realizes that George could not give her the money and social status that she desperately wanted, she is devastated. Even though she may have loved George before, feelings of greed completely overwhelm any residual feelings of love. Then comes Tom Buchanan, a rich upper-class man that offers Myrtle exactly what she wants. Although Myrtle seems to be very in love with Tom, she is only in love with his money. In fact Tom’s money is what draws Myrtle to him in the first place: “He had on a dress suit and patent leather shoes and I couldn’t keep my eyes off him” (40). Myrtle sees Tom as her one-way ticket to the upper-class, already acting like a wealthy New York socialite when around him.

Although Nick seems to be in love with Gatsby, he is only in love with the thought of Gatsby. In his first description of Gatsby, Nick claims “there was something gorgeous about him, some heightened sensitivity to the promises of life”(6) and “a romantic readiness such as I have never found in any other person”(6). Because of the reckless high-class life that he has been surrounded with, Nick tends to romanticize the idea of having a one true love who you would do anything, and Gatsby is the only person that he encounters who carries this trait. This false love is also shown when Nick arranges Gatsby’s funeral. Nick puts in so much effort to find people that will come to Gatsby’s funeral, but not because Nick truly cares about him. After a fruitless phone call with one of Gatsby’s acquaintances, Nick admits that he “felt a certain shame for Gatsby”(177). If Nick was really in love with Gatsby then he should’ve been feeling despair that nobody would show up to Gatsby’s funeral. He should have been sad that no one cared enough to mourn the death of this person that he adored so much. Nevertheless, the primary emotion that Nick feels for Gatsby is a shame. But Nick doesn’t feel shame for Gatsby as a person, he feels shame specifically for Gatsby’s image or reputation. Nick admires Gatsby because he idolizes the idea of a genuinely virtuous man with such dedication to love. When people fail to come to or even care for Gatsby’s funeral, Nick finally realizes the fact that other people don’t have this same view about Gatsby. This is where Nick feels the shame, he feels offended that people do not have this amazing image of Gatsby. With Nick’s love for Gatsby being built on a false interpretation of who he really is, Nick is completely apathetic when it comes to really caring for Gatsby. The day after Daisy kills Myrtle, Nick goes to Gatsby’s house telling him “You ought to go away”(155). However, Nick knows a vital piece of information, “and suddenly [Nick] guessed at the truth. “Was Daisy driving?” “Yes,” [Gatsby] said after a moment”(151). It does not make any sense for Nick tell Gatsby to leave town when Daisy was the one who had committed the crime. If Nick was truly in love with Gatsby, he would have done anything for him. Nick would have revealed the fact the Daisy was driving the car to protect Gatsby’s life. Instead, Nick decides to remain mostly impassive, choosing to be a side character with the least involvement that he could in the situation.

The Great Gatsby, despite its reputation of being the ultimate love story, is filled with fake love built upon feigned relationships. Characters like Daisy and Myrtle exploit the love that they receive, manipulating their partners for their own selfish means. On the other hand, characters like Nick and Gatsby only love the false impressions and delusions of the people they claim to love. Love is a feeling that is very much coveted, driving the emotions and actions of living beings. Nevertheless, love is tainted too easily to the point where we cannot distinguish between real love or fake love. If so many never experience pure real love, perhaps it ceases to exist at all.

Love and Relationships in The Great Gatsby. (2021, Mar 05). Retrieved from https://studymoose.com/love-and-relationships-in-the-great-gatsby-essay 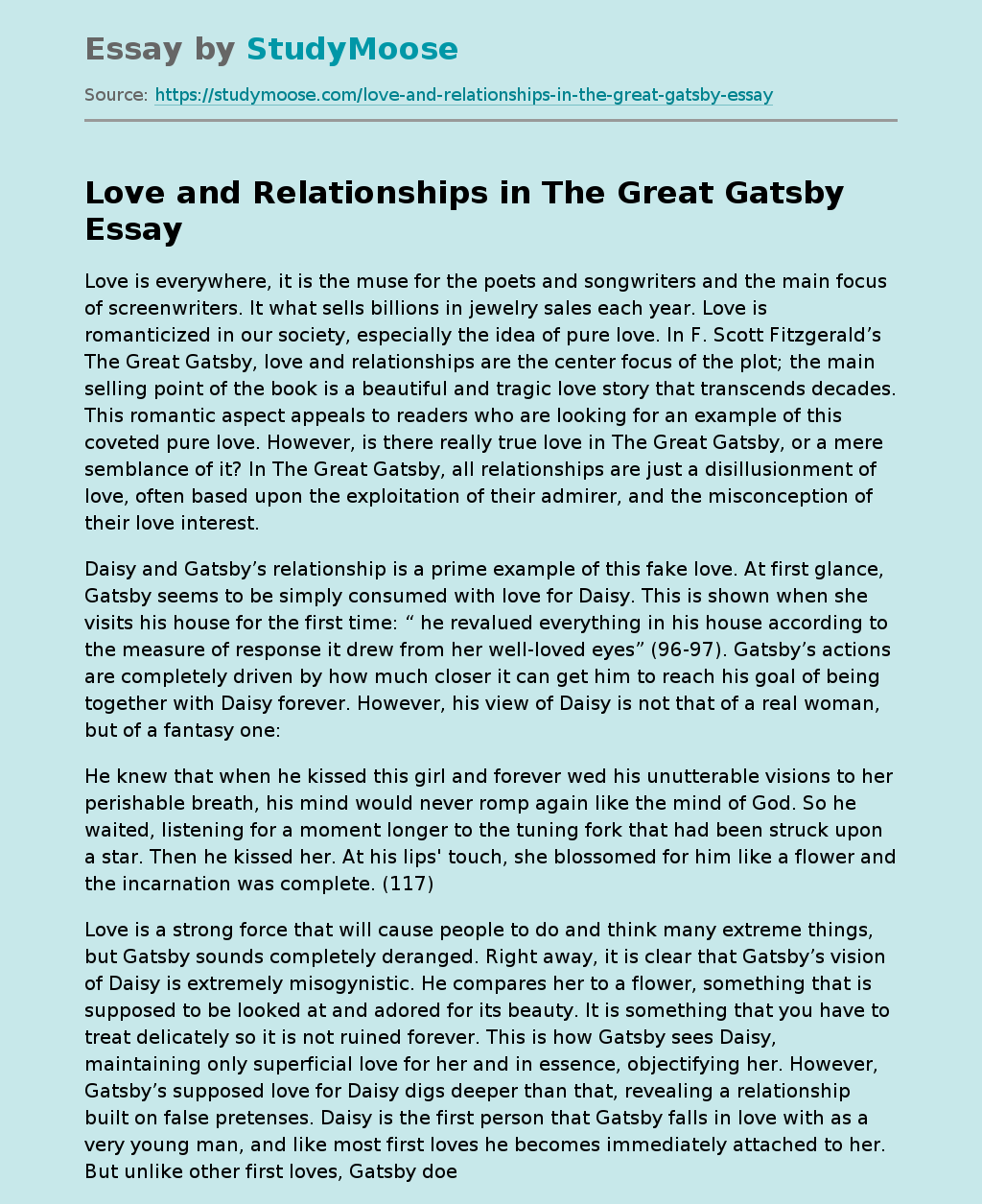