The Great Gatsby: The Love Triangle

Many have heard the phrase “love triangle.” For those who have not, a love triangle is simply a romantic relationship involving generally three people. Most love triangles are rivalrous, meaning that two people are competing for the same person. Love triangles appear in many novels and movies. One famous novel with a love triangle is F. Scott Fitzgerald’s The Great Gatsby. In this novel, Gatsby and Daisy are dating, but Gatsby is sent off to fight in World War I.

Don't use plagiarized sources. Get your custom essay on
“ The Great Gatsby: The Love Triangle ”
Get custom paper
NEW! smart matching with writer

Daisy tells Gatsby that she will wait for his return so they can get married. However, Daisy meets Tom Buchanan, a wealthy man whom Daisy agrees to marry instead. In 1922, Nick Carraway, the narrator, moves to the East to learn the bond business. He moves into a house in West Egg and became neighbors with Gatsby. Gatsby, whom has not seen Daisy in nearly five years, tries to reestablish his relationship with Daisy, even though she is already married to Tom.

After many disputes between Tom and Gatsby for Daisy, Daisy ends up staying with Tom. Daisy made the right choice in choosing Tom over Gatsby.

Daisy made the right choice in choosing Tom over Gatsby because Tom offers Daisy more security than Gatsby. Near the end of Chapter VII and after Daisy kills Myrtle, Gatsby tells Nick to check on Daisy, and Nick sees them in their kitchen. Nick says:

Daisy and Tom were sitting opposite each other at the kitchen table, with a plate of cold fried chicken between them, and two bottles of ale.

He was talking intently across the table at her, and in his earnestness his hand had fallen upon and covered her own. Once in a while she looked up at him and nodded in agreement. They weren’t happy, and neither of them had touched the chicken or the ale… and anybody would have said that they were conspiring together. (Fitzgerald 144-145)

In this excerpt from The Great Gatsby, Tom and Daisy are chatting in their kitchen with some fried chicken and ale. However, they do not actually eat or drink any of it. Once in a while, Daisy looks at Tom and nods at him in agreement of something. They are reconciling their differences with each other. Then, Nick points out how it was obvious that they are plotting some sort of plan. Daisy no longer feels safe with Gatsby, especially after witnessing Gatsby and Tom’s argument. Even though Daisy and Tom are not happy with each other, they still hold a meaningful conversation to the point where they ignore the fried chicken and ale they had with them. Also, Daisy shows her acceptance of Tom when she briefly nods in agreeance with him. This excerpt ultimately shows how Tom offers more security than Gatsby. Tom feels secure enough to allow Daisy to go back home with Gatsby. He is not even upset at Daisy for going home with Gatsby. Instead, Tom shows his calmness when he engages in a conversation without arguing with Daisy. Furthermore, Daisy made the right choice to stay with Tom because Tom can support Daisy’s wealthy lifestyle without the need to make the money illegally. He can also forgive Daisy for having a relationship with Gatsby. That is how Tom offering Daisy more security than Gatsby shows that Daisy made the right choice in choosing Tom over Gatsby.

Daisy made the right choice in choosing Tom over Gatsby because Gatsby is selfish. In Chapter VII, Gatsby sees Daisy’s daughter, Pammy, for the first time. Nick narrates Gatsby’s reaction, “He kept looking down at the child with surprise. I don’t think he had ever really believed in its existence before” (117). In this excerpt of the novel, Gatsby appears to be surprised by the existence of Pammy. Gatsby already knows about Pammy’s existence, but the reality of actually seeing her shocks and startles Gatsby. Gatsby is startled because his constructed imagination for himself and Daisy was to repeat the past and ignore everything that happened for the last five years. Gatsby is selfish because he only cares about his life and relationship with Daisy and nothing else. He does not even care for Daisy’s daughter. Daisy made the right choice to stay with Tom because with Gatsby being selfish, he may put himself above Daisy in various situations where Daisy would need Gatsby’s help. That is how Gatsby’s selfishness shows that Daisy made the right choice in choosing Tom over Gatsby.

Daisy made the right choice in choosing Tom over Gatsby because Gatsby is a liar. One example of Gatsby lying occurs in Chapter IV when Nick rides with Gatsby to New York. Gatsby says, “I am the son of some wealthy people in the Middle West-all dead now. I was brought up in America but educated at Oxford” (65). Then Nick asks, “What part of the Middle West?” (65). Gatsby then replies, “San Francisco” (65). In this excerpt of the novel, Gatsby is supposedly sharing his past with Nick while driving to New York. He mentions how his family was from the Middle West but specifically from San Francisco. Nick has an idea that Gatsby is lying about his past. He confirms that Gatsby is lying when Gatsby said that he was from the Middle West and specifically from San Francisco. San Francisco is located in California, not the Middle West. This scene, along with many other scenes, prove that Gatsby is a liar because he failed to tell the truth to the person he was speaking to. Daisy made the right decision to stay with Tom because if she would have chosen Gatsby over Tom, Gatsby would just lie to Daisy just as much as he did to Nick. If a person is lying to his or her spouse, their relationship would be unhealthy, and it would most likely result in a divorce. That is how Gatsby’s lying tendencies show that Daisy made the right choice in choosing Tom over Gatsby.

Daisy made the right choice in choosing Tom over Gatsby because Tom offers Daisy more security than Gatsby, Gatsby does not care about Tom and Daisy’s daughter, and Gatsby is a liar. One could learn from Gatsby’s character in The Great Gatsby. One should offer security to friends and family, avoid being selfish, and avoid lying to others. These three lessons could be applied into one’s life by committing to promises made, serving others who need help at no cost, and telling the truth to others. If people apply these rules into their lives, relationships between a couple would be stronger and healthier, families would be closer with each other, and people would have much more faith in others.

The Great Gatsby: The Love Triangle. (2021, Mar 25). Retrieved from https://studymoose.com/the-great-gatsby-the-love-triangle-essay 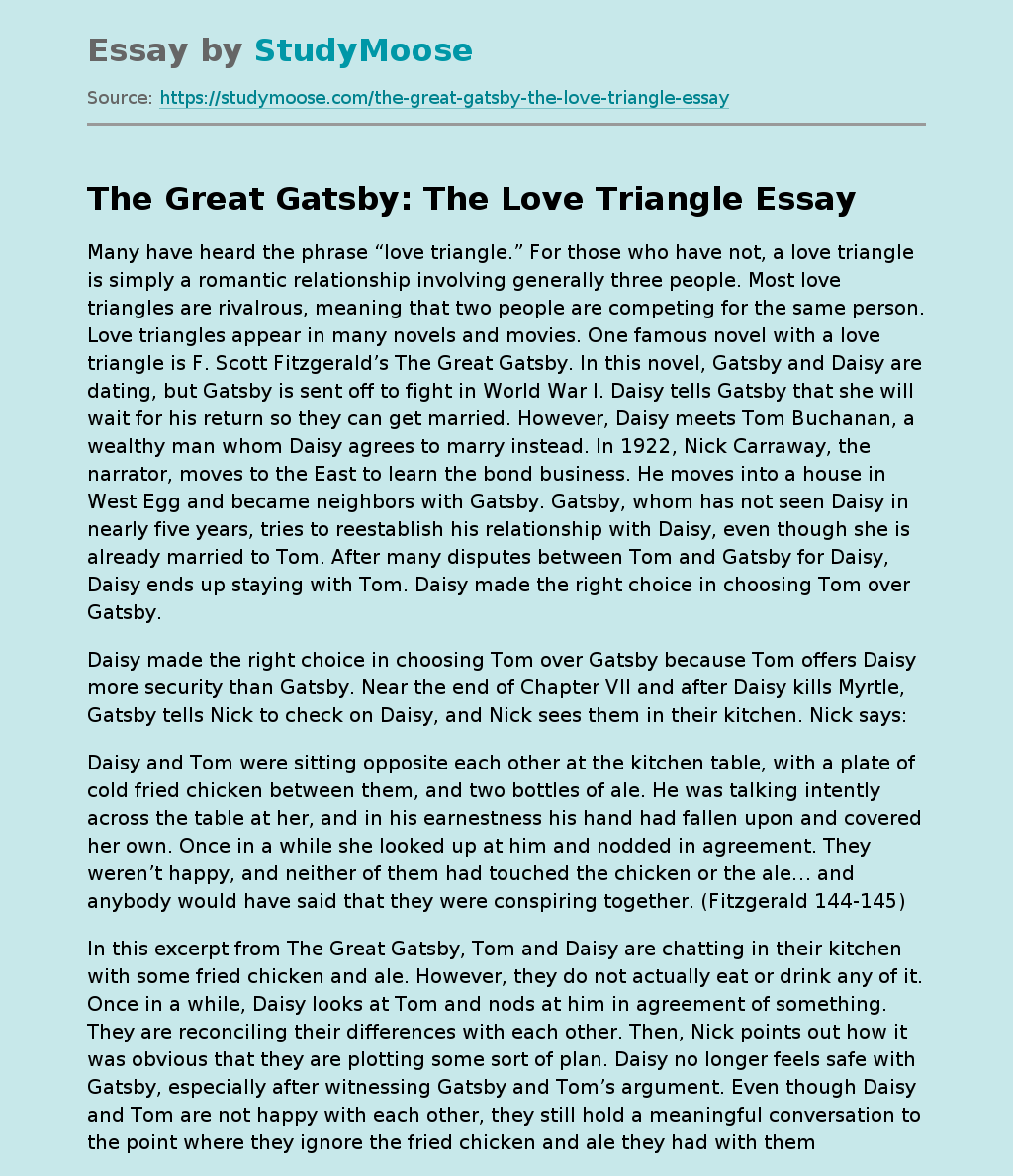