Triangle: The Fire That Changed America

Published in 2004 by Gover Atlantic Inc, David Von Brehle wrote Triangle: The Fire That Changed America that recounted that fateful day at the Triangle Shirtwaist Factory on March 26, 1911. Von Brehle portrayed not only the horrors of the trapped workers in the factory but also included the poor state of worker’s safety and low wages. Von Brehle’s purpose of writing about the Triangle disaster is to inform readers that factory conditions in the late nineteenth century and early twentieth century were very unsafe as employees worked for very little pay.

Don't use plagiarized sources. Get your custom essay on
“ Triangle: The Fire That Changed America ”
Get custom paper
NEW! smart matching with writer

The beginning of the book starts off on a brief note of the aftermath of the Triangle fire disaster. It describes how people around the shirtwaist factory reacted to this tragedy including the employees’ family members. The book later returns to chronological order and starts to tell about labor unions, such as WTUL (Women’s Trade Union League), being granted their requests from factories after a long bitter strike. The life of the immigrants is also depicted before and after their departure towards the United States, the “Golden Land.

Stories about Jewish mistreatment in Eastern Europe were very common, like in the case of Rosie Freedman. Religious oppression and poverty forced many Jews from Eastern Europe to evacuate their homeland towards the United States. As for Italian immigrants, they were escaping an ecological disaster. The cutting of trees by irresponsible privateers caused a massive change in the country ecology that eventually lead towards hunger and disease due to the erosion of topsoil.

The huge migration of immigrants to the United States sparked a time of cheap labor. Industries, such as the Triangle, took advantage of the immigrants’ situation by paying them very little to work up to fourteen hours a day, six days a week. Not only were they underpaid, their safety was at risk. A crowded workplace and lent floating in the air only meant disaster.

Disaster soon struck on the afternoon of March 26, 1911 at 4:40 p.m. as the word “fire” was shouted throughout the shirtwaist factory. After the fire, the turning point of Tammany Hall begins to occur as hundreds of thousands of people attend the funeral of everyone who died in the blaze.

A constant reminder throughout the book by Von Drehle is the mistreatment of laborers and their impoverished living conditions in tenements. A huge wave of job competition due to immigration caused wages to drop. This drop in wages soon led towards the largest labor strike. The Local 25 and WTUL (Women’s Trade Union Labor) helped rally laborers to strike against factories for unfair wages. A fourteen-hour day, six days a week is also mentioned as a constant torture for workers which fueled the organized strike.

They pledged to continue to strike until their demands were met. Overcrowded tenement also became an issue. The tenements in which laborers, mostly immigrants, lived in were overcrowded and unsafe during the case of a fire. The thirteenth census of the United States, census of 1910, confirmed that at least 500 people per acre lived in the Lower East side.

Von Drehle’s perspective of the outcome of the Triangle fire disaster is positive since the fire caused reforms for the good of the laborers. Progressives saw the fire as an opportunity to strike against the unjust practices of industries throughout the country. College-educated men and women were encouraged to live and work among the workers, an idea that originated in London.

This allowed progressive men and women to witness first-hand the brutalities of factory labor. The tide of change for Tammany Hall later came. Since the late nineteenth century, Tammany Hall relied on graft and Old immigrants’ votes for political power. Now in this era of change, Tammany Hall boss Charles F. Murphy began to embrace reforms shortly after the Triangle disaster to win over the New immigrants’ votes.

The author presents both sides of the Triangle fire: the worker’s point of view and the owner’s point of view. Von Drehle allows his audience to decide whether or not the outcome of the disastrous fire was for the good of all. In his view, the Triangle fire sparked a boost to progressives during the early twentieth century. The outcome of the disastrous event is described in the beginning of the book. Family members desperately try in vain to identify their loved ones. The Triangle Shirtwaist Factory fire will be known as the worst industry disaster until September 11, 2001.

David Von Drehle presented many accounts of evidence of the Triangle Shirtwaist Factory disaster. In his book, he included newspaper editorials, such as The New York Times, Jewish Daily Forward, and New York World. Newspapers during the early twentieth century were in danger of yellow journalism which loses much creditability. Journalists tended to exaggerate the news only to make front headline cover news.

Another downside to newspapers is that it only points out the situation in only one prospective, but Von Drehle did a great job in combining different newspaper editorials to provide a different prospective of different publishers of the disaster that occurred that fateful day of March 26, 1911. Other historical books that are specialized in a certain area, labor unions against shirtwaist factories for example, were widely used in his book Triangle: The Fire That Changed America.

By him taking information from historical books, his own book becomes more of a third-hand account rather than just a second-hand account. Quotes from first-hand accounts, whether from the workers or the owners themselves, are scattered throughout his book which gives his book more creditability as long as the quotes are not altered significantly. Testimonies from these eye witnesses were mainly used in the Triangle: The Fire That Changed America.

The style and organization of the book was quite different than what I have become accustomed to. Triangle: The Fire That Changed America starts off on the peak of the action as a sort of a preview of its climax. Organization of the book is quite unusual, but it is written in plain English. I recommend this book to anyone interested in early twentieth century history. History is a valuable piece of information and disastrous tragedies should not be forgotten as generations come. I think it is important to read this book since the Triangle fire should not be a forgotten tragedy.

Triangle: The Fire That Changed America. (2016, May 25). Retrieved from https://studymoose.com/triangle-the-fire-that-changed-america-essay 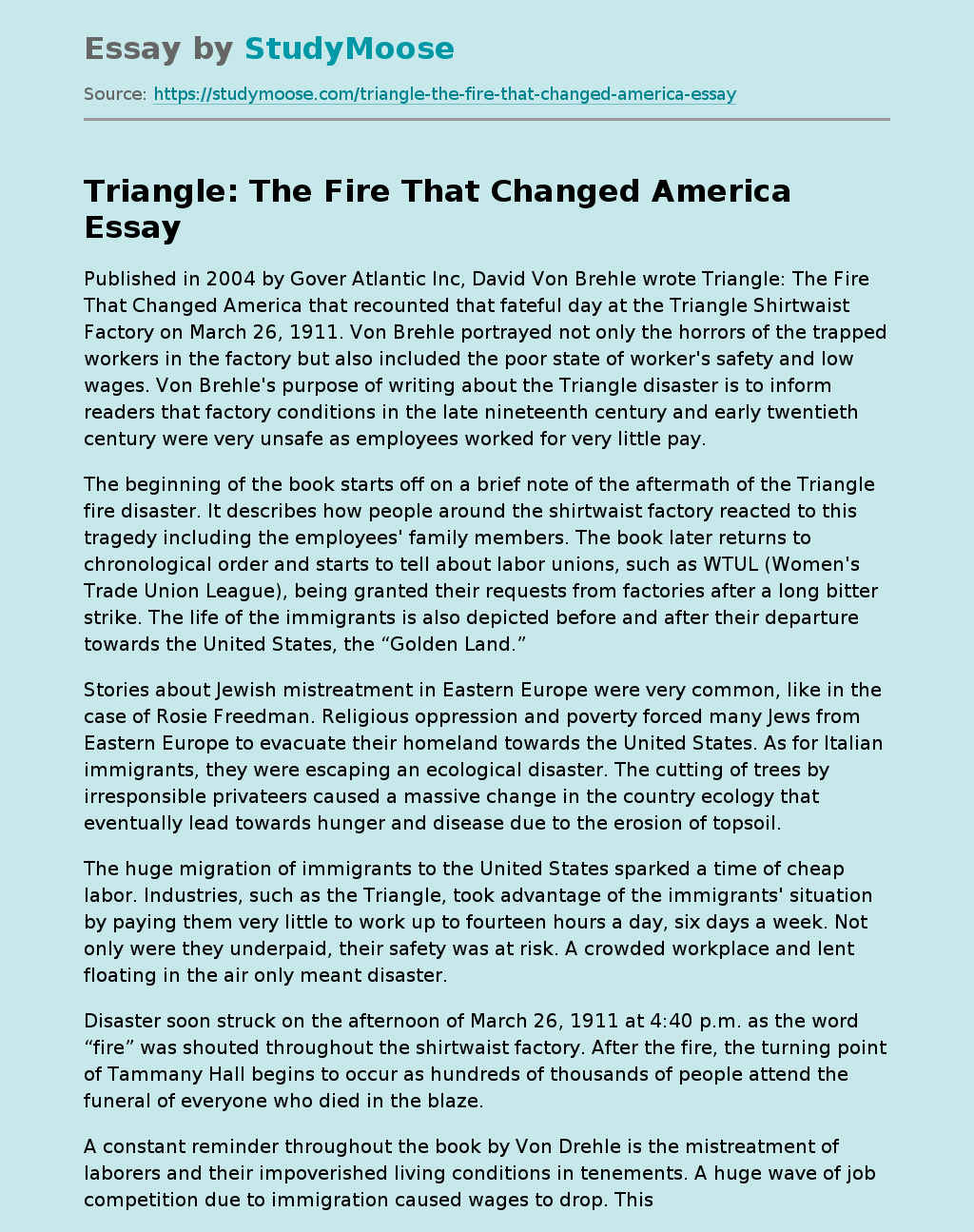