Turn in your highest-quality paper
Get a qualified writer to help you with
“ Macbeth was doomed by fate or by a flaw in his character ”
Get high-quality paper
NEW! AI matching with writer

The extent to which Macbeths downfall is determined by fate or a flaw in his character will be discussed.

”_ Macbeth did not question the accuracy of the prophecies, which he believed were preordained because in Elizabethan times, it was believed that witches could see into the future, kill their enemies and make themselves invisible.

Everyone believed that the witches could see the future, and this led Macbeth to the idea of killing Duncan once he had listened to the prophecy that he would become King of Scotland. Macbeth thought, _”If chance will have me king, why, chance may crown me without my stir.

”_ An interpretation of this quote according to Macbeth could be, if fate wanted him to be king, perhaps fate would just make it happen and he wouldn’t have to do anything. Consequently, Macbeth was lead to fate through the prophecies of the witches, but by trying to master fate, his ambitious nature and greed for power was the flaw in his character that ultimately led to his downfall.

Macbeth is not doomed by fate, but by a flaw in his character. This flaw can be viewed as the way he let his ambitions take over and cloud his morality. At his first taste of power, his ambition takes over and he is craving for more. Since Duncan is already King, the only way for Macbeth to fulfil his desire is to kill him. Macbeth admits that he has to kill Duncan and ultimately his own ambition drives him to decide to kill the King. _”I have no spur to prick the sides of my intent, but only vaulting ambition, which o’erleaps itself and falls on the other.”_ This is proving that Macbeth was prepared to kill anyone who was at risk to undermine his seat on Scotland’s throne. Macbeth blurred his good judgement and sacrificed his morals to achieve his goal, to become king. Macbeth put his own desire before the good of his country and in the end it is destroyed by his ambition. Therefore, Macbeth’s ambition and greed for power was not caused by fate, but by a flaw in his character that he is responsible due to his corrupt actions.

Macbeth’s ambition went to all lengths to become kind of Scotland, that despite the influences, Macbeth was still responsible for his own actions. The witches told Macbeth his three prophecies; they forced nothing, just simply presented facts that influenced Macbeth to act. Macbeth interpreted the words and actions to make the prophecies come true. The witches gave Macbeth a fake sense of security and it is his tragic flaws that brought him upon his downfall. After Macbeth was told the prophecies, he said to himself _”My thought, whose murder yet is but fantastical, Shakes so my single state of man that function.Is smother’d in surmise, and nothing is. But what is not.”_ The witches’ prophesy awakens within Macbeth a murderous ambition that was there all along.

Lady Macbeth is the driving force that encourages Macbeth to overcome his sense of guilt and take action on the prophecies. Lady Macbeth manipulated Macbeth into murder by saying _”When you durst do it, then you were a man”_ An interpretation of this quote according to Lady Macbeth could be, he was more of a man when he dared to commit the murder, and recognizes that his ambition to commit the murder and claim the throne are attractive and manly to her. Lady Macbeth was a huge influence to Macbeths corruptions, for instance she says, ” A little water clears us of this deed.” Meaning she is literally washing her hands of with murder. Even though Lady Macbeth was a huge influence, Macbeth was the one who held the dagger. As a consequence of Macbeth’s actions, it was his ambition and greed for power that ultimately led to his downfall.

Even in consideration of external forces such as manipulations of Lady Macbeth and prophecies of the witches, Macbeth decided his own fate through his actions. His morality was weak and he was self-centered. Consequently, Macbeth ambition and greed for power was the flaw in his character that ultimately led to his downfall.

Macbeth was doomed by fate or by a flaw in his character. (2016, Aug 09). Retrieved from https://studymoose.com/macbeth-was-doomed-by-fate-or-by-a-flaw-in-his-character-essay 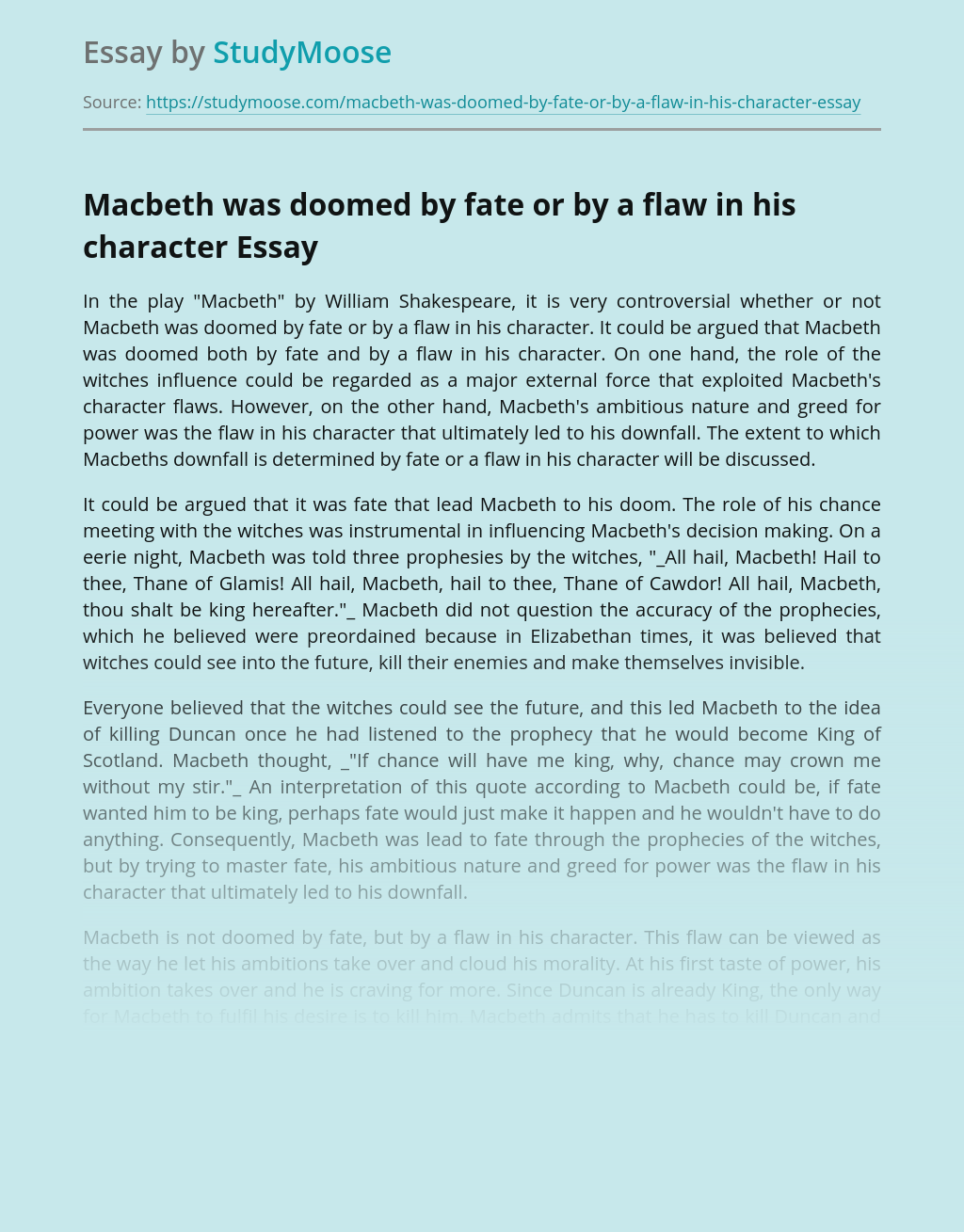 Turn in your highest-quality paper
Get a qualified writer to help you with
“ Macbeth was doomed by fate or by a flaw in his character ”
Get high-quality paper
Helping students since 2015
Stay Safe, Stay Original