Considered by some to be one of the finest tragedies ever written, Shakespeare’s Othello tells the story of one man’s fall from happiness to utter despair. This is achieved by Othello’s fatal flaws – his jealousy and pride. Othello’s own fatal flaws lead him to his demise not Iago’s manipulation. This view point is supported in Professor Crawford’s article “Othello as a Tragic Hero.”

In his article, Crawford conveys the idea that the misfortunes that befall Othello are cause because of Othello himself – drama of character – not by Iago or any outside social forces – drama of intrigue.

Don't use plagiarized sources. Get your custom essay on
“ Othello: A Tragic Hero ”
Get custom paper
NEW! smart matching with writer

Because of this Othello can be described as a drama of character meaning that it is an internal conflict within the main character Othello. Othello is the one at fault for the terrible events in the play.

Aristotle indicates that in order to be a tragic hero is not perfect; the character is fallible. The character’s fatal flaw or hamartia is the weakness that will ultimately lead to the character’s demise. And for a play to be a tragedy, the protagonist must be a person of high standing in society and that the character must fall from power and happiness in the end. This can be seen in Othello when at the beginning of the play, Othello is introduced as a great man of power and high status to the rest of the characters.

This can be seen during Act I, Scene III, the duke and a couple of senators of Venice were discussing issues and when Othello enters the room and the senators say, “Here comes Barbantio and the valiant Moor” By saying this, the senators make it clear that they hold Othello in high esteem. Othello is known to the senators and the rest of the characters as a great war hero full of pride and courage. However, as the play progresses, Othello’s character begins to deteriorate. His character changes from that of a flawless leader to a murderer after Othello is driven over the edge by “honest Iago’s” lies. Iago, knowing that Othello is overly trusting, takes advantage of that fact to manipulate Othello into doing whatever he wanted.

Throughout the entire play, Iago never made Othello do anything in was all in Othello’s control of how the events happened. Iago merely insinuated that something should be done about Desdemona’s unfaithfulness. It was Othello who jumped to the conclusion that Desdemona should die. Even though Iago said he would take care of Cassio, it was Othello agin that jumped to the conclusion that Iago would kill Cassio. Othello’s destruction is precipitated by his own actions throughout the play. By isolating himself from everyone except Iago, Othello made it especially easy for Iago to influence him and his course of action. This does not mean that the play is a drama of intrigue, meaning that “outside events manipulated the main character in a way so that he had no choice in the matters at hand” (Crawford). No, Othello was responsible for his decisions meaning this play is a drama of character.

An example of a drama of intrigue would be Romeo and Juliet. Shakespeare made it so Romeo and Juliet had no control over their two families’ quarrels. They had neither control nor power in stopping the outside events that ultimately tore them apart. Romeo and Juliet were victims of their own parent’s animosities towards each other.

This is different from Othello and Desdemona. With Othello and Desdemona, Othello had complete control in ending the confusion. He could easily have talked to Desdemona and stopped Iago’s dastardly plans from the start. But no, Othello let Iago control the situation in what Othello thought at the time was Iago trying to help him. This happened because of Othello’s flaw of being over trusting of those around him. By doing this, Othello made it too easy for Iago to influence his decisions. Iago may have been able to influence Othello’s decisions and the decisions of those around him but it was Othello’s own actions that eventually led to his downfall.

The way the events of Othello interacted with each other in a way that made it seem like everything happened for a reason shows the literary merit of the play and how Shakespeare wrote it. The events of the play fit so perfectly with each other, it was almost too coincidental that the events happened in the way they did. For example, Cassio’s lover Bianca walking in with Desdemona’s handkerchief while Cassio is talking with Iago all the while Othello is watching from a far. However, Shakespeare made it so
everything was done purposefully when he wrote the play. Everything had a purpose in conveying the story of Othello. By doing this, the play shows great literary merit.

In conclusion, the play Othello shows many characteristics described by Aristotle in what makes a piece of literary work a tragedy. Othello was a high ranking person in society full of happiness only to lose it all due to his fatal flaws of jealousy and pride. Because the downfall of Othello is all his own doing making him the tragic hero of the play, the play is considered a “drama of character where the downfall of the character is his or her own doing” (Crawford). As opposed to a drama of intrigue where outside events influence the character. Due to the purposeful writing of Shakespeare of the events in the play, Othello shows great literary merit along with being a tragedy.

Othello: A Tragic Hero. (2016, May 10). Retrieved from http://studymoose.com/othello-a-tragic-hero-essay 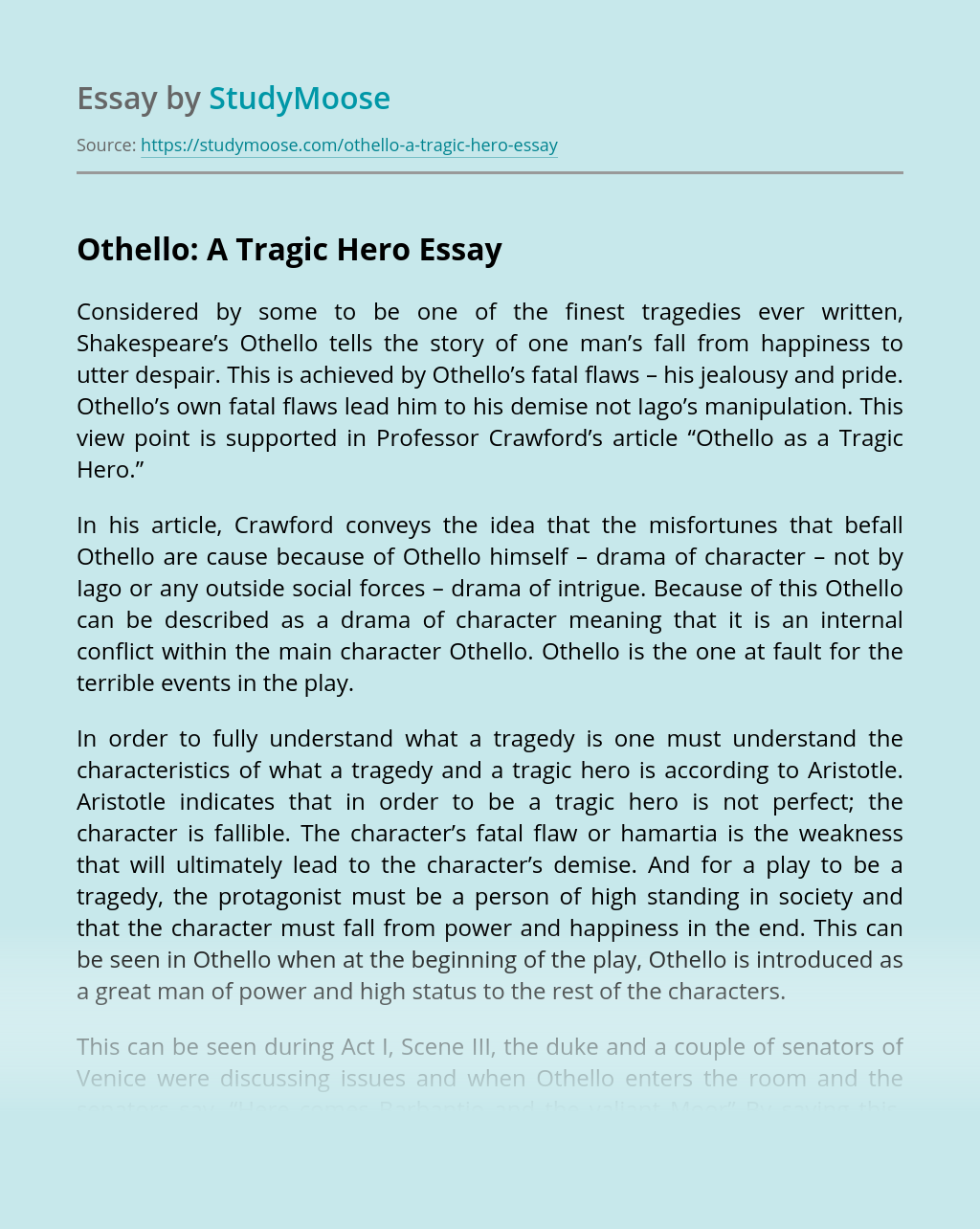