How was Macbeth's fall from grace a tragedy?

Shakespeare presents an image of Macbeth originally as a hero, a role model of courage and bravery. However his indiscernible fascination with darker forces, portrayed by the witches, and whilst he is aware of the treachery in his subsequent actions throughout the play, his ambition engulfs his better judgement, where he contributes to his downfall from such greatness, and thus his character is human, enhancing such a tragedy. Macbeth experiences a sudden disastrous reversal in fortune where his material wealth rapidly multiplies and his personal values swiftly decrease, leaving him loveless, as well as childless, and eventually lifeless, factors which are remnant of Shakespearean tragedies.

Don't use plagiarized sources.
Get Your Custom Essay on How was Macbeth’s fall from grace a tragedy? Just from $13,9/Page

Even as he retains comprehension of his fate, approaching the play’s finale the audience experiences a certain catharsis, in which they feel pity for his misfortune, even if this character has behaved appallingly, in that his ambition and Lady Macbeth had pressure him to transform someone he himself did not like.

Originally, Macbeth is portrayed as an image of prominence, and his relentless enthrallment with supernatural forces results in circumstances whirling out of his control. ‘Brave Macbeth…like Valour’s minion carved out his passage…’ and thus assisted significantly in the victory which ensued, earning him a multitude of respect from not only the people, but King Duncan. In fact, the worthy King does see to it that as an added prestige and a gift of gratitude to such a noble gentleman, the title of Thane of Cawdor which has been retrieved from a most ‘disloyal traitor,’ and somewhat ironically considering Macbeth’s fate, ‘what he has lost, Macbeth has won.’ It appears, that upon the meeting of the three witches, who do deliver the three prophecies that indicate such a prosperous future for Macbeth, he is fuelled by his own ambition.

It could be argued that this is beyond his own control, a mere circumstance often viewed in tragedies, where other characters and conditions are unrestrained by the protagonist, as it is realized that the witches have arranged to ‘meet with Macbeth’ and tempt him, yet he is aware of the possibility of their lies as ‘imperfect speakers’ and thus, his ‘rapt’ removes the possibility of his providence being unpreventable. The reader forms an impression of Macbeth prior to his personal introduction into the play, and thus Shakespeare employs a clever technique in placing Macbeth on a pedestal from our perspective prior to his arrival.

Unexpectedly, Macbeth experiences a sudden reversal in fortune, where he is forced to maintain criminal conflict in order to preserve his status which he has come to rely upon, and in doing so, manages to lose all that was initially dear to him. In what seems like moments, Macbeth achieves the Thane of Cawdor alongside the King of Scotland, but eludes the intimacy he once shared with his wife, and once such a conspirator, leaves her an innocent spectator to ‘applaud the deed.’ The gradual separation of Macbeth and his Lady is strangely sardonic, especially subsequent to the death of Lady Macbeth, where his perspective offers that ‘she should have died hereafter’ resignedly, similar to his manner upon achieving realization that his death is impending, thus presenting a double meaning in referral to himself and his deceased beloved. Shakespeare displays a sharp contrast in which Macbeth seems to have at one instant everything a man could desire including a kingdom and pregnant wife, afterwards he is found to be truly alone, ‘abhorred tyrant, stripped of his love, child and eventually life. Such abrupt affluence exchanges in which a protagonist moves from happiness to misery, perhaps even death is often a result of dramatic conflict, typical in an Elizabethan tragedy.

Disasters which are to follow Macbeth’s foremost crime are inevitable, and his awareness of this increases his humanity, as he has a flaw of pride which eventually is fatal. His evident ignorance of the many signs which do indicate to him to discontinue this murderous work are either for his own personal objectives as he has ‘no spur…but only vaulting ambition which o’erleaps itself’ or for that of Lady Macbeth’s taunts which stimulate him as she insults his manhood in her opinion of him as a ‘coward in thine own esteem.’ Early in the play, he does establish the distrustfulness of the witches, as ‘the instruments of darkness’ and with knowledge of their ‘imperfect’ speech he still allows their words to effect him greatly, so much as to he ‘is in blood, Stepped in so far that …should wade no more, returning were as tedious as go’er.’ Upon knowledge of Macduff’s flight, Macbeth’s overruling passion for his prominence engulfs his better judgement, and he does order to murder of ‘his wife, his babes, and all unfortunate souls that trace him in his line.’ Macbeth’s judgment is so weakened by worship for the position he holds that barbarian acts of murder to innocent women and children is no longer beneath him, and Shakespeare presents this in such little light that it appears to be of no importance to Macbeth at all.

Prior to Macbeth’s death, the audience experiences a purgation of emotions, almost a catharsis in which empathy is felt for the protagonist, due to the fate dominated by supernatural forces which he appeared to never have true influence over. For his fate was partly predetermined, and his eventual loss followed by a release from such a suffered life is partly relieving, and partly saddening, as his eventual outcomes differ so greatly from his intentions. This misfortune he experiences may be larger than he deserves. Macbeth was once ‘valour’s minion’ and now communicates and consorts with ‘black and midnight hags,’ a procedure used to represent his obvious downfall. Formerly, upon the initial assassinations Macbeth does commit, we see glimmer of conscience when he ‘could not say Amen.’ His discarding of God’s ways in the Elizabethan era would have caused uproar from certain people, yet others would be moved to pity with empathy for somebody who could lose such faith in God. In fact, Macbeth pities himself, when he realizes that to ‘know my deed, ’twere best not know myself’ and thus the reader commiserates with Macbeth in his regret. Finally, the reader experiences such compassion as Macbeth admits he has ‘lived long enough’ and cares not about his lack of army, and only wishes to die fighting, a soldier, the way he did begin, and agrees to ‘let them fly all.’

In termination, Macbeth’s fall from grace is a tragedy in the way in entails many such factors, involving elements of catharsis, as well as a sudden reversal in fortune for the protagonist. The circumstances beyond Macbeth’s control also contribute to his collapse, thus his disgrace was premeditated, and the pity exploited amongst the audience for Macbeth allows for a purgation of emotion, leading to the belief that the tragedy’s conflicts were a result of human flaws and perhaps his death was whilst deserved for his actions, perhaps not his beliefs.

How was Macbeth’s fall from grace a tragedy?. (2016, Jun 21). Retrieved from https://studymoose.com/how-was-macbeths-fall-from-grace-a-tragedy-essay 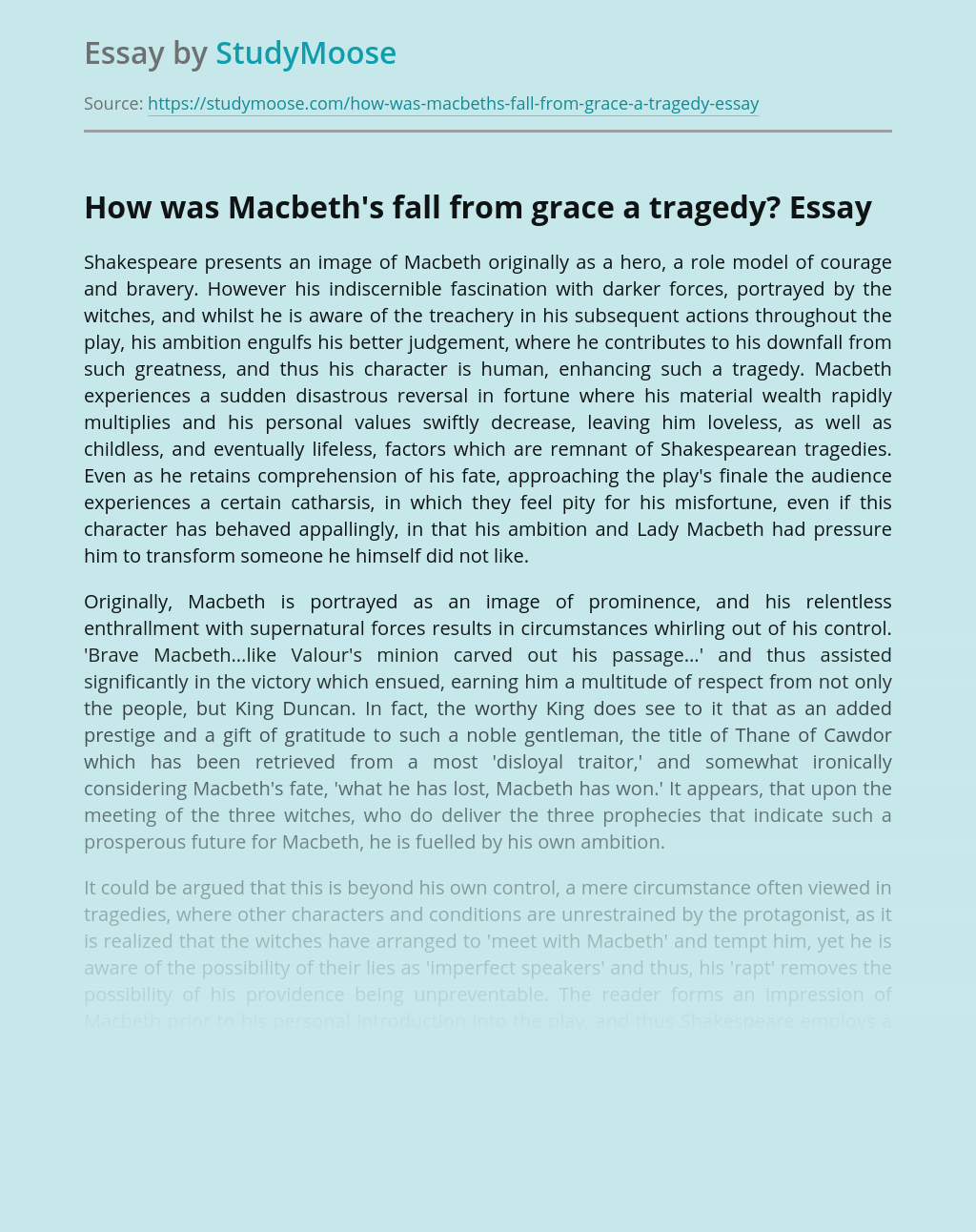 The Taming of the Shrew

Rate this post The character of Kate in William Shakespeare’s The Taming Of The Shrew is an outspoken and stubborn young woman living in Italy during the sixteenth century. Her independence and willful attitude mean that she often has difficulty conforming to social norms and fulfilling society’s expectations of her. Kate is pressured into marrying...

Get Essay
Good vs. Evil - Lord of the Flies

Rate this post Star Wars, Superman, James Bond—all of these are stories which chronicle the ever-present warfare between good and evil. What exactly is good? How does one describe evil? The answers to these questions are highly subjective, and could be debated for years on end without ever reaching a final conclusion. However, it is...

Winston's transformation from "1984" by George Orwell

Rate this post Personally, I prefer the original play of “A Midsummer Night’s Dream” only slightly more than the film adaption that was recreated in the late 1990’s. Not only had William Shakespeare managed to fully grasp the meaning of true love, but had also comprehended the dark times that came alongside such an influential...