The Role and Significance of Hubris in the Fall of Jason

As is archetypal to all Greek tragedies, ‘Medea’ by Euripides chronicles the downfall of a noble hero, Jason, as a result of a combination of factors like fate, hubris and the will of the gods.

In ‘Medea’, the hubris of the main character, Jason, was his pride. This drove him to betray his wife Medea’s trust and defy moral parameters set by the gods. Euripides employed the hubris of Jason and his act of disobedience towards the gods as a reflection of Athenian society of the time and used this as an attempt to correct the progressively immoral ways of society.

Turn in your highest-quality paper
Get a qualified writer to help you with
“ The Role and Significance of Hubris in the Fall of Jason ”
Get high-quality paper
NEW! AI matching with writer

This piece focuses on pride as Jason’s hubris and its contribution to his imminent downfall. Jason’s pride is brought out by his desire to attain the Golden Fleece and later on to improve his social standing by marrying Glauce. In his quest for glory, he does not pause to analyse the effects of his actions upon himself and the individuals around him, thus bringing about his eventual downfall.

However this delusional justification does not save him from the repercussions of his actions which he has to face for the rest of his life knowing that his hubris caused him everything he loved or desired such as Glauce or his sons Mermeros and Pheres. When Medea meets him within the confines of Creon’s palace we see an open display of his pride and this is most acutely seen when he mentions that it was the goddess that made Medea fall in love with him and he is under this false impression that he was under the protection of the gods.

He goes on to provide weak rationalizations to protect that pride, he tries to point out constantly that he had to marry Glauce as if it was a matter of compulsory nature instead of one of choice, yet the viewers of the play as well as Medea see though the veil of smoke he is trying to hide behind. Jason needs to attain the position of king as it had already been robbed from him in Iolcus and as he was a hero as well his pride demanded him to seek a higher position in life. Jason continues to suffer as a victim of his hubris when he believes that Medea has had a dramatic change in mind right after his “persuasive” argument.

His pride again is the reason behind this, he is so convinced that Medea has seen the light of his reasoning and thus has had a change of heart that he fails to see through the web of revenge that he was shortly going to get caught in. Medea uses her superior intellect to mask her anger and her vile intentions and manages to convince him of her complete obedience to his wish. Pride poisons his judgement whereas he could have chosen to stay loyal to Medea and their marriage but instead he seeked a higher position in life as being reputed as a hero just wasn’t enough for him.

His pride required him to rise to an even higher position and what other position was higher than that of being a king. That is the prime reason why he decided to walk away from his marriage to Medea and instead embrace Glauce as his new wife which would in time lead to his accession as king of Corinth. So over here Jason is being portrayed as man divorced from his inner emotions and only thinks about life in terms of power and glory. Glauce is nothing but a symbol of power, whereas Medea was a means as to which he could attain the Golden Fleece.

Jason has become a man who is governed by his hamartia and he would stop at nothing in order to get what he wants. However not all blame should be placed upon him. He was brought up as a hero; notions of pride, victory and glory have been fed to him since a young age where he was under the tutelage of Chiron. So it should be hardly surprising that the desire to seek Glory to fuel his pride is inherent in him. Yet it should not be solely blamed upon his upbringing as an individual he has control over his own characteristics.

He must be embracing his pride to have been able to attempt to claim the Golden Fleece and later to seek empowerment by marrying Creon’s daughter when he could have just honoured his promise to the gods by being with Medea. Now the theme of conflict between good and bad should be analysed as it would provide a greater insight into Jason’s character and his eventual fall. From the beginning of the play the conflict between good and bad where Medea and Jason are concerned has been ambiguous. Both characters have done terrible things in order to attain what they want.

Nothing could stand in the way of them including Medea’s father, whom Medea betrayed and to pile on the grieve she kills her brother and drops parts of him into the sea so as to delay her father thereby ensuring that Jason and his Argonauts could fulfil their quest to attain the Golden Fleece. When Jason betrays Medea and walks away from their marriage we immediately identify him as the villain, yet the reader fails to understand that during that time when this play was written it was still socially acceptable for the man to walk away from his marriage provided he gives back the dowry he attained from the wife’s father.

In this case Medea did not bring any such items so it was even easier for him to leave her so as to empower himself. It was Medea’s role as a woman belonging to that age to accept Jason’s decision however she feels betrayed that he would break a vow made in front of the gods, and apparently she was not a regular woman even by the standards of that time as she had an intellect that could rival that of scholarly men.

So to exact her revenge she destroys everything Jason loves leaving him to regret ever betraying the marriage. Societal pressure and his own hamartia have led to him making the fatal decision to wed Glauce. The reader also comes across two themes which are to a degree interlinked. These themes are Deniability and accountability. Though it is possible to categorize various individuals under these themes, in accordance to the topic title only Jason will be focused upon.

He continuously tries to deny Medea’s sacrifices in order for him to become a hero in the first place, because without Medea’s assistance in getting past the tasks set forth by the king of Colchis Jason and his Argonauts however great would not have been able to attain the Golden Fleece. In addition Jason blamed Medea for his demise towards the end of the play, though it is true that it was Medea who brought him down to his knees; it should be noted that it was Jason’s decision fuelled by his Hamartia that led to his divorce from Medea and as a result his ruin.

Jason also shirks away all accountability as to the fate of his sons whom he had with Medea and he doesn’t really intervene in favour of his former family when Creon wanted to banish them as he himself seems to have conveniently forgotten about them as he had embraced his new life full heartedly and in the eyes of the audience he has lost all accountability and is shown as a shallow character which to a certain degree is indeed true and this also contributed to his fall. In conclusion Jason as a leader of men might have been unparralled but he is weak in morals.

In this play he is the embodiment of all the morals and promises made to the gods by mere mortals such as Jason as it just seemed more convenient that way. Medea in turn is the personification of all things moral, excluding the methods she employs in order to exact her revenge. Jason turning a blind eye to the will of the gods is one of the most important factors that led to his demise. Since the gods felt betrayed they placed their support upon Medea and enabled her to fulfil her will no matter what horrible acts she was forced to commit.

The Role and Significance of Hubris in the Fall of Jason. (2017, Feb 13). Retrieved from https://studymoose.com/the-role-and-significance-of-hubris-in-the-fall-of-jason-essay 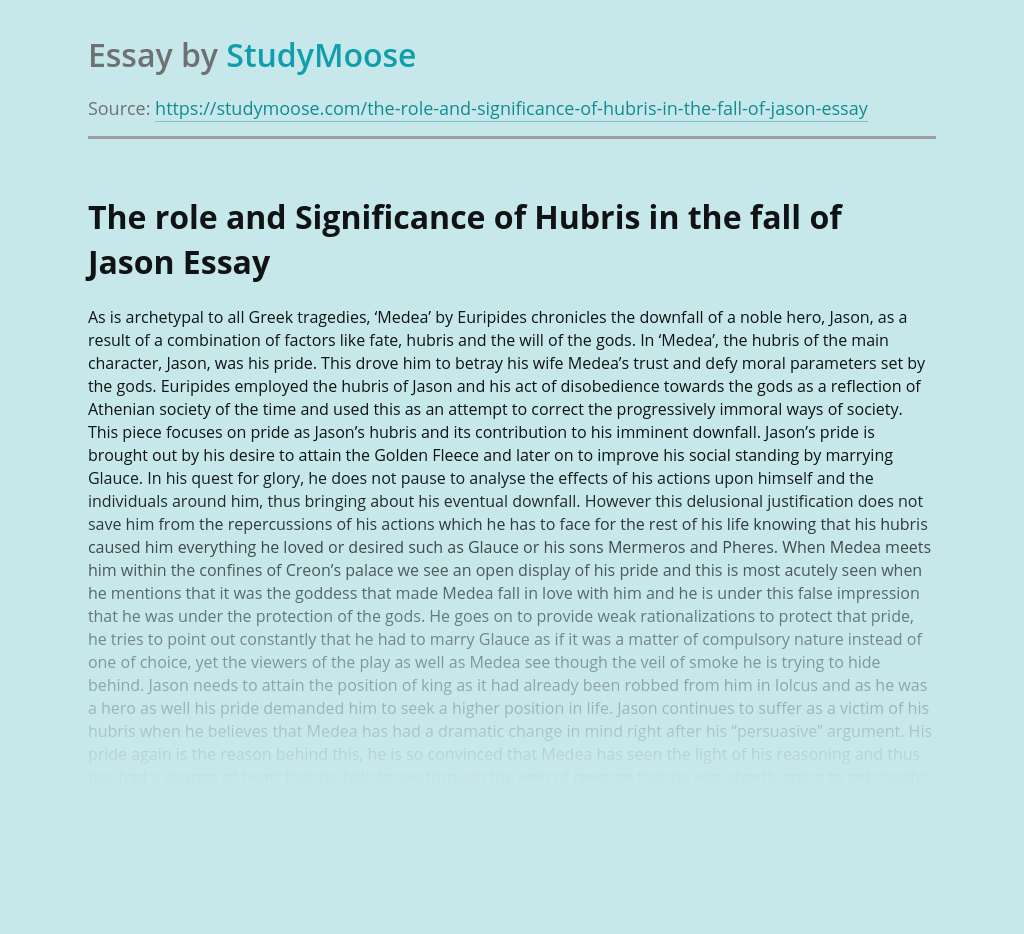 Turn in your highest-quality paper
Get a qualified writer to help you with
“ The Role and Significance of Hubris in the Fall of Jason ”
Get high-quality paper
Helping students since 2015
Stay Safe, Stay Original