Pride Goes Before A Fall

In a bid to exemplify the notion’s statement, “pride goes before a fall,” Alice Walker, Joyce Carol Oates and John Updike draw on their main characters Dee, Connie, and Sammy in their stories “Every day Use,” “Where Are You Going, Where Have You Been? ” and “A&P” respectively. Dee, Connie and Sammy are an example of how the notion of pride is shown in various ways and how as their pride reaches its peak, they fall.

Don't use plagiarized sources.
Get Your Custom Essay on Pride Goes Before A Fall Just from $13,9/Page

Dee shows her pride in her self centered personality that causes her to lose her appreciation for her mother and her sister Maggie, and causes her to abandon her heritage and become distant.

Connie, in “Where Are You Going, Where Have You Been? ” shows pride in her overconfidence that leads her to act impetuously causing her to lose her personal safety. Sammy, in “A&P” shows pride by simply quitting his job in response to what he views to be an unacceptable behavior by his boss, and wishes to grab the attention of girls that merely recognize him.

The Preoccupation with pride that these characters have causes them to eventually fall. Dee’s egocentrism leads her to become unappreciative to both her family and her heritage.

Dee reveals her true personality when she responds to her mother for the reason she wants to take the quilts instead of her sister in the quotation, “Hang them, she said. As if that was the only thing you could do with quilts”(Walker 375). This quotation shows moment when Mama’s attitude changes in the story. Before it, she was submissive to Dee and had much respect for her. After, she realizes that Dee will never be grateful to her or even able to understand that there are other people in this world besides herself.

However, her selfish desires of getting whatever she wants leads her to loose her mother’s respect. Connie’s self assertiveness ended by her loosing her safety. Connie shows her pride in her personal thought as the narrative states, “ actually Connie thought that her mother preferred her to June because she was prettier”(Oates 53). Connie’s overconfidence of her self comes from her beauty. She finds her self to be a beautiful young girl who is a point of interest among the boys.

As a result of herself, she builds up her personality with that overconfidence, while at the same time building her pride up. As soon as her pride is at its maximum level, she acts in an impetuous way ignoring the outcomes of her actions, this can be seen through the quotation, “It was a car she didn’t know… she whispered “Christ, Christ,” wondering how bad she looked… she went into the kitchen and approached the door slowly, then hung out the screen door, her bare toes curling down off the step”(Oates 54). This quotation shows Connie’s pride and how her pride causes her to fall.

Connie’s reaction when she finds a stranger in her driveway by wondering how she looks reveals that her pride takes value over her safety, while the normal thoughts that any body can think about when he finds a stranger entering his driveway is thinking about his safety, Connie is only concerned with her beauty. Connie’s overconfidence pushes her to approach the door which is the beginning of her fall. Connie lives in her small safe life of teenagers, not taking into consideration the outside wild life that she approaches blindly.

At the time she decided to open the door, Connie the teenager and the young adult is blended together. Connie is in a stage of maturation— She decides to approach the door for the stranger which is the teenager side of her mind and at the same time she approaches it slowly which is the young adult side of her character. Her action to hang out the screen door is the time when Connie is completely mature and considered a young adult. At this moment, Connie cannot go back to the level of maturity she had when she was a teenager. Connie starts the fall.

Connie’s overconfidence causes her to portray an imaginary photo of how the world is and she acts from this perspective which ultimately ends her losing her self security. Sammy resigning his job shows pride, but renders him inferior in society. Sammy shows pride in the way he reacts to his boss, Mr. Lengel. The way he treats the girls is shown in the quotation, “The girls who’d blame them, are in a hurry to get out, so I say “I quit” to Lengel quick enough for them to hear, hoping they’ll stop and watch me, their unsuspected hero”(Updike 87).

The quotation shows the girl’s reaction to Mr. Lengel’s words. They want to go out of the store as quick as they can. It also shows Sammy’s rashness in thoughts and making decisions by stating that he quits in a quick manner. Quitting to Sammy is a way that he shows pride and is a way to grab the girls attention. He is showing that he supports them, and he thinks that they will consider him their hero. Sammy also shows hesitation that his action may attract the girls attention. He hopes that by quitting, his proud actions will grab their attention.

However, he comes out of the store and he does not find any body waiting for him. As the narrator states, “I look around for the girls, but they’re gone… I felt how hard the world was going to be to me hereafter”(Updike 88). At this moment, Sammy realizes his fall. This fall can be viewed in two perspectives. The first perspective is a superficial one because he thought that the girls would be impressed and would be waiting for him which they didn’t. The second is when he realized that he quit his only job and that world will be hard to him, which is something that is hard to handle.

Pride Goes Before A Fall. (2016, Dec 20). Retrieved from https://studymoose.com/pride-goes-before-a-fall-essay 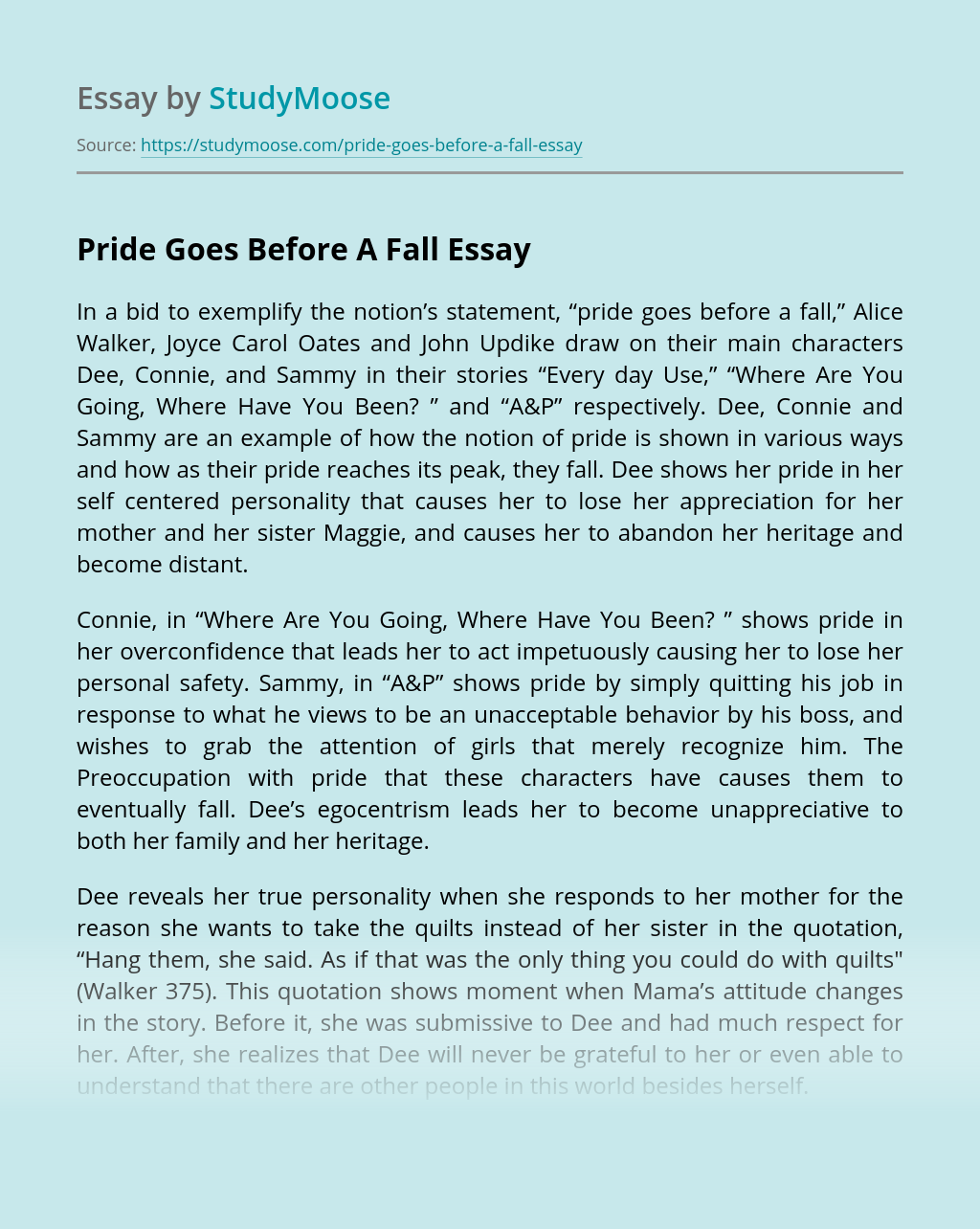 Rate this post “A & P” is first-person narrative revealing the delusively ordinary story related by the checkout boy in the grocery store named in the title. In “A & P” the first-person narrator is defined largely by his tone and vocabulary. Updike molds his protagonist through the use of specific writing style, thus Sammy...

"Catcher in the Rye": Not a Bildungsroman

Rate this post Bildungsroman: a coming-of-age novel. Many critics and readers alike have argued that JD Salingers Catcher in the Rye is a superb example of a bildungsroman. The novel is a narration by Holden Caulfield, a troubled and mentally unstable sixteen year-old that has just been expelled from his fourth prep school. Holden, who...

Get Essay
Analyse how the development of relationship between characters helped you to understand the characters in the written texts. Lord of the Flies

Rate this post What features make it amusing? “Notes From A Small Island” is Bill Bryson’s accounts from travelling around Britain. He writes in a very distinctive style. He compared this journey to a similar one that he took in 1973. He begins the book by recalling his first sight of England “on a foggy...

Rate this post Romanticism and Realism, the two major threads in art and literature in the nineteenth century, both clearly had their roots in the burgeoning industrialism of the world around them. While both strove to show real people and question who was in power, Romanticism did this through the individual and exotic or even...