The Parsley Garden Kehful Shaikh When a person has been made to feel humiliated and worthless, they will not rest until that nagging feeling in their heart has felt vengeance. This is the case in the short story The Parsley Garden written by William Saroyan. Saroyan demonstrates Al’s loss of honour through characterization and use of symbols. First, he feels as if he should walk back into the store he stole from and tell off the young man who had caught him or even try and steal the hammer again without getting caught.

Turn in your highest-quality paper
Get a qualified writer to help you with
“ The Parsley Garden ”
Get high-quality paper
NEW! AI matching with writer

He then is offered money to pay for the hammer he was originally trying to steal. At last he felt he needed to take matters into his own hand and work for the hammer. Al discovers that there are many ways to find revenge, but very few leave a person truly satisfied. Throughout the story, parsley is a symbol that is alluded to often. Traditionally, this tiny green garnish represents rejuvination.

Being a plant that is biennial, it also symbolizes a second chance. Al strives to rejuvinate his honour and get a second chance to show Mr. Clemmer, the owner of the shop, that he is a self-respected young man.

When Al got home after his humiliation at the store, “he sat down where the Parsley itself was growing and he pulled a handful of it out and slowly ate it. “(pg. 3) He did this because he felt as if he needed to refresh himself of the guilt he was feeling by eating the parsley.

Al gets his second chance when he goes back to the store and works there along side the fellow who had caught him the previous day. Saroyan shows us that Al has regained his honour when he is told that he can have a job there however Al refuses but he does take the hammer home with him.

That evening, “Al Condraj sat on the bench he had made, and smelled the parsley garden and didn’t feel humiliated anymore. ” (pg. 5) For Al, parsley signified him being revived and relieved of the humiliation that came from stealing a small hammer. Out of the whole store, the item that caught Al’s eyes, was a small hammer. Saroyan reflects Al’s personality through the use of this small hammer. He described it as “… a small hammer that was not just a toy but a real hammer. ” (pg. ) Just as the hammer was small but not a toy either, Al was also a young man, not an adult, which showed why he was petty-minded. In many ways, hammers are like a double edged sword. They can be used to rebuild things but also to break them down. When Al attempts to steal the hammer and is caught, he is “crushed, confused and now bitterly ashamed of himself. ” (pg. 2) After having his pride broken, he rebuilds it by working at Woolworth’s to rightfully earn the hammer. Al later used that to build a bench that he then uses as a rest place in the parsley garden.

Al desperately wanted to restore his honour after he was caught stealing a hammer from Woolworth’s and was humiliated afterwards. After walking away from the crime site, “…he decided he didn’t want to go home just yet, so he turned around and started walking back to town. ”(pg. 2) Al walked back to the store because he felt that things shouldn’t have ended the way they did and he wanted to change that. He wanted to go back “…and say something to the young man who had caught him. ”(pg. 2) He wanted to hurt the young man’s feelings just as he had hurt Al’s.

Afterwards, as an even bigger act of defiance he felt he should “…steal the hammer again, and this time not get caught. ”(pg. 2) Al had been made to feel like a thief anyway, so he thought why not go rub it in their faces that he was able to get what he wanted in the end. However, “…he lost his nerve,”(pg2) and so “…crushed and confused and now bitterly ashamed of himself…. he began walking home”(pg2) to his mother. Still feeling extremely humiliated as he had been caught stealing at a department store, Al thought of ways to regain the respect that was consequently lost.

After sitting in his mom’s garden eating parsley, “…he went inside and told his mother what had happened. ”(pg3) He felt he needed to state what had happened to him and I feel as that it would have relieved him of some of the burden if he told his mom. His mother, without chastising him, simply offers him ten cents and says, “You go back to the man and you give him this money. ” (pg3) This was yet another way of restoring his self-respect – by paying for what he originally was caught stealing.

Nevertheless, Al refuses her help saying, “No, I won’t take your money for something I don’t need. ”(pg. 3) We realize here that it’s no longer about having a hammer; it’s about the humiliation that came with trying to obtain it and the way he felt worthless standing in the owner’s office. Al knew that just getting a hammer wouldn’t help him feel respected again and so he had to find another approach to extinguish his humiliation as it “…was beginning to really hurt”(pg3) and so that night “…he didn’t sleep much…and he went over six or seven ways by which to adjust the matter. (pg. 3) Al struggled to renew his dignity as he had “…tried stealing and had been caught at it and he was troubled. ”(pg. 4) The day after the incident, as his mother returned home, she saw Al “…making something with a hammer,”(pg4) and she inquired about it, to which he replied that he had “… worked at the store for it. ” Al decided that he should earn the hammer fair and square and what better way to do that then work at the store for it.

He told his mother how Mr. Clemmer had given him the hammer after he’d “…worked for one hour”(pg4) but he “went right on working,”(pg4) and finally the young man who had caught him stealing told Mr. Clemmer that Al had “…worked hard all day and ought to be paid at least a dollar. ”(pg5) Al had worked right on to show how mature he was and so he was rewarded with a dollar. Mr. Clemmer also said Al “…could have the job”(pg. 5) as “…the store needed a boy”(pg5) like Al “…every day, for a dollar a day,”(pg. 5) to which Al refused. This was Al’s ultimate revenge.

He wanted the chance to refuse them and make them feel hurt as well, because after all, being able to say no is a sign of power. Al realized that he “…didn’t feel humiliated anymore. ”(pg5) In the short story, The Parsley Garden written by William Saroyan, the author, shows characterization of the main character through his humiliation and the use of symbols. He discovers many ways to bring back his honour. He first wants to tell off the young man who had caught him and go back and try stealing the hammer again.

However, not having the guts to do that, he walks back home, where he is offered money to buy the hammer. Not feeling satisfied with doing that, he decides that the best thing would be to show the owner what a great person he is by working all day to get the hammer. As a result, he is offered a job but Al refuses it. This is how Al felt like he regained his honour and self-respect, and finally feeling at peace. A person will not feel content after being humiliated until they have executed their perfect revenge plan. 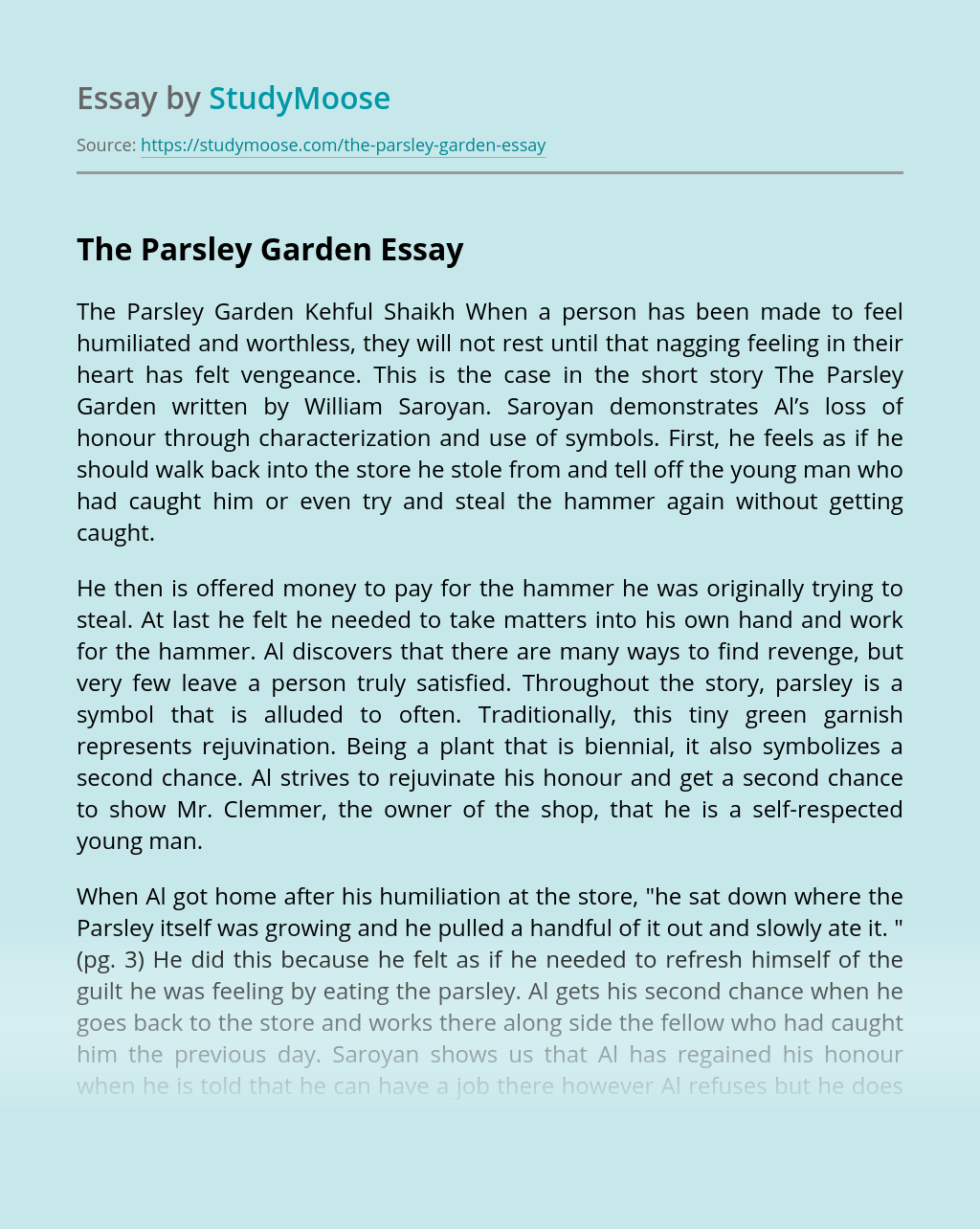 Turn in your highest-quality paper
Get a qualified writer to help you with
“ The Parsley Garden ”
Get high-quality paper
Helping students since 2015
Stay Safe, Stay Original