My Son Changed My Life

Before my son had arrived, I was in complete shambles. My life was spiraling down a one way tube into darkness. I had become everything that I had only wished I wouldnt. I was known as nothing better then “white trash”. I thought that I had it all. I was only 17 and I was free. I left home to be with my ex- boyfriend, and I was free! No rules, No boundaries, just freedom. I thought life couldnt get any better.

Don't use plagiarized sources.
Get Your Custom Essay on My Son Changed My Life Just from $13,9/Page

Although, as time went on I realized how much I missed my family, and how things were starting to turn sour in my relationship. We had no money.

For weeks, we had nothing. We were living off of our friends who were gracious enough to take us in. I started doing drugs, and drinking every chance I got. I stole items to pawn them for money. Most of the money went twords food, drugs, or alcohol. I was lucky I was underage when I pawned stuff becasue word had gotten around to the cops that it was stolen, and every person who did it was thrown in jail.

Thankfully, I was only put on probation for 6 months. Things started to look up for a little when my ex and I moved back in with his parents.

It was a hell hole, but it was a place to stay without living off other people. We started to hang out with friends every night, driving around the town, drinking, starting fights, just waiting to get in trouble. We didnt realize it at first, but the person we were driving around with was what most would call “bi-polar”. It only took one night to realize it, and that would be the end of that. We were driving around with this friend when she had gotten so mad at this person, that she circled the block, and tried to hit him with her car.

Thankfully we were on the same block as my ex’s parents, so we called it a night. I was worried that I pregnant in the begining of December, but I didnt take a pregnancy test until 4 days before christmas. I can remember it just like it was yesterday too, I was sitting in a local resturaunt with my friend and I had went into the bathroom to take the test. I remember screaming for my friend to come in, and she couldnt beleive it. I took a second test to be 100% sure, and in deed I was pregnant. We didnt tell family until Christmas Day.

Most of my family was happy for me, but some of them were a little doubtful that I would stop the nonsense I had gotten myself into. And indeed I did. I moved back home with my parents, and I started my life all over again. I was a brand new person, and in less then 8 months, my life was going to change even more. On August 9, 2006 my son was born. He was the most beautiful baby boy I had even layed eyes on. He was so special, and he had to be sent from heaven. I had moved in with his father in March and we were doing really well.

My son had only brought us closer together, and he was our pride and joy. He still is til this day. My son changed my life in many ways. Before he was even here he had changed my life. I realized that I had to grow up and be a better person. I wasnt just going to be taking care of myself, but a baby too. I had be responsible. I had to be the best mother I could possibly be. After he arrived, I realized that I wouldnt have to sit around and think about alcohol or drugs, and wish to do them.

My son kept me occupied enough for me to understand that there was more to life then drugs and alcohol, that there was more to it then having freedom. It wasnt about me anymore, It was about my family, and I would do anything for them. My son was my lifesaver. I tell him everyday that he is an angel. I just hope that when he’s old enough, he’ll understand exactly why he is my angel. He turned my life upside down, which in reality, had turned me back to the person I was supposed to be.

My Son Changed My Life. (2016, Nov 02). Retrieved from https://studymoose.com/my-son-changed-my-life-essay 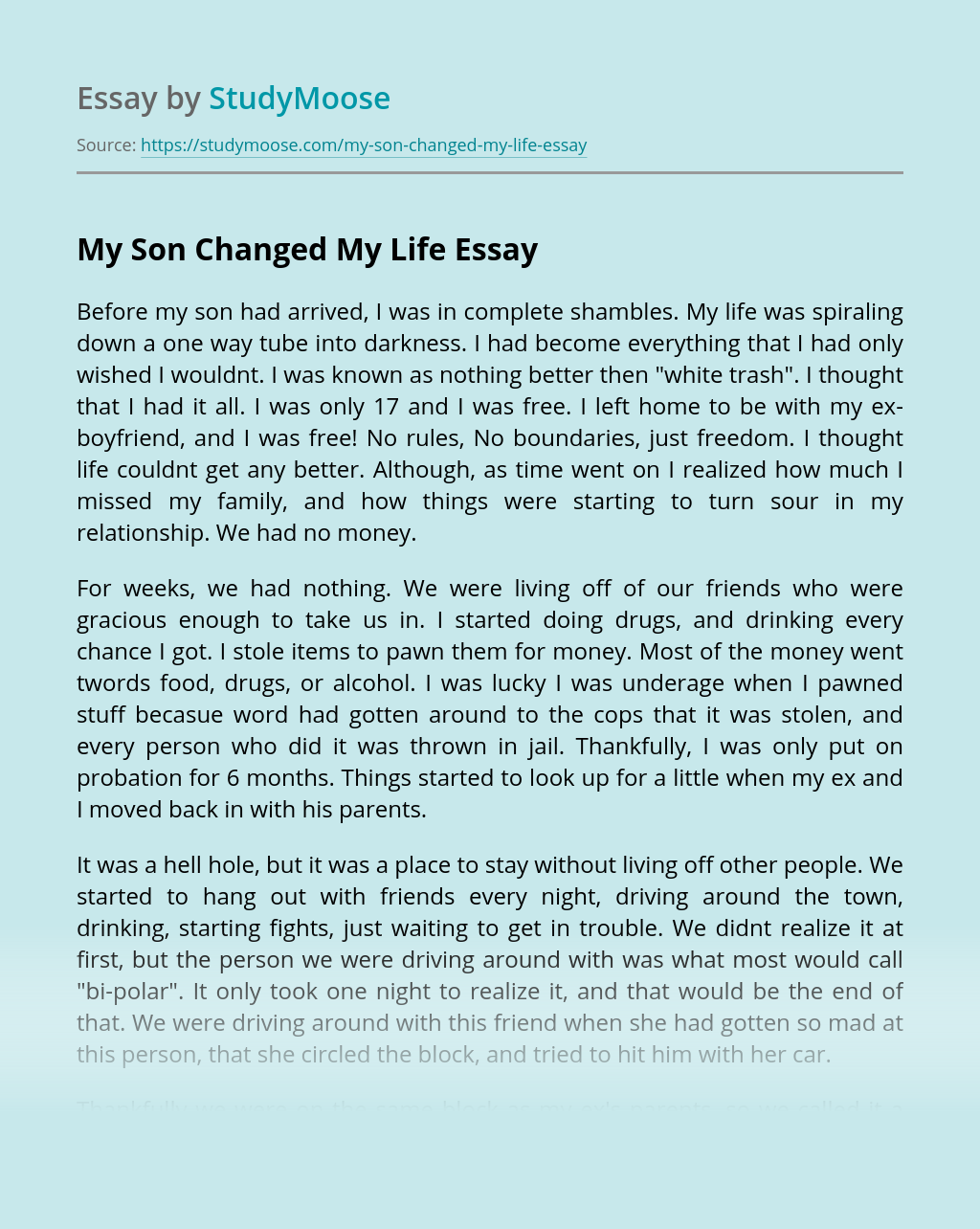 Same sex marriage is one of the most controversial trends that appear in the world today. In today’s society most of us are taught that a marriage should be a union between a man and a woman, as well as, same sex relationships being a sin because it is looked down upon by God. Despite...

Going deaf was a different experience for me. It was the most difficult challenge I’ve ever done. It completely sucked that I couldn’t use most of my electronics. I couldn’t use my phone to call my mom but I was able to text her. I couldn’t listen to music which was the worst because I...

View sample
Get Essay
An inspector calls, drama and tension