Juxtaposition of Order Against Chaos in “There Will Come Soft Rains.”

The juxtaposition of the orderly house and the destroyed, chaotic neighborhood around it paints a stark picture that, at first, makes the reader wonder what what is happening. The clues about what has happened come out in the sixth and seventh paragraphs: “The house stood alone in a city of rubbleand ashes. This was the one house left standing. At night the ruined city gave off a radioactive glow which could be seen for miles”. There Will Come Soft Rains” is one of Ray Bradbury’s most famous stones.

Don't use plagiarized sources. Get your custom essay on
“ Juxtaposition of Order Against Chaos in “There Will Come Soft Rains.” ”
Get custom paper
NEW! smart matching with writer

Written in an era in which many people were concerned about the devastating effects of nuclear weapons, the story depicts a world in which human beings have been destroyed by nuclear force. The central irony of the story is the fact that humans have been destroyed rather than saved by their own technology. – It is easy to imagine the complete chaos and utter despair of the aftermath of an atomic bomb explosion.

While most of us have never experienced it, the various atomic bomb tests of the 1950s and 1960s, as well as the two bombs of World War Two, give us a good idea of what happened at the moment the bombs exploded. In “There Will Come Soft Rains”, the author gives us a detailed description of a house in the future, where virtually all household tasks are automated. The house descriptions are so detailed, they seem mundane and very monotonous.

An example: “In the kitchen the breakfast stove gave a hissing sigh and ejected from its warm interior eight pieces of perfectly browned toast, eight eggs sunny side up, sixteen slices of bacon, two coffees and two cool glasses of milk.

” And this contrasts mightily with what the author implies has happened: an atomic bomb has exploded, and this house is the only one left standing. The juxtaposition of the orderly house and the destroyed, chaotic neighborhood around it paints a stark picture that, at first, makes the reader wonder what what is happening. The clues about what has happened come out in the sixth and seventh paragraphs: “The house stood alone in a city of rubble and ashes. This was the one house left standing. At night the ruined city gave off a radioactive glow which could be seen for miles”. Then, the story causes the reader to think again: Is someone alive? Could anyone have survived? How is this house still functioning? Why is this house still functioning? Order and chaos are related to and dependent on each other. The clear cut distinction between them is man made and an illusion. Society uses order to regulate all aspects of the world from nature to personal lives, while chaos allows for open mindedness and also provides an explanation for certain aspects of the world. This can be seen in science, theology, music, language, and imaginative play. Science is rational, logical, and orderly. It has the ability to break apart complex systems into simpler ones described by theories ad equations. This is seen in the description of the planets’ orbits, evolution, and Newton’s laws. Scientists have a thirst for knowledge and seek understanding about the world around them. Their methods are clear and proper ,such as the popular scientific method. Yet even with all their rules and equations they have come to realize the universe is not as predictable and orderly as it seems. The weather, planets, asteroids, organisms, populations, etc. do not always follow the rules that have been assimilated as truths in society . Such an example is the extinction of the dinosaurs, which allowed humans to exist and flourish described by Alvarez. Asteroids can move in unpredictable ways and one did 65 million years ago, and it can happen today. The concept is unimaginable to most ,due to their strong faith in science that is believed to be able to predict or prevent destructive phenomenon in the world. This belief that science is a universal and infallible truth began in the enlightenment and led to modernism. The goal of modernists, synonymous at times with scientists ,is to show that order leads to better functioning and is superior to disorder. To accomplish their goal they must make discoveries that lead to greater knowledge, which they believe leads to greater order, yet they also have to categorize multiple areas and thoughts as disorderly. What is categorized as disorderly becomes an outsider

Juxtaposition of Order Against Chaos in “There Will Come Soft Rains.”. (2016, Apr 07). Retrieved from https://studymoose.com/juxtaposition-of-order-against-chaos-in-there-will-come-soft-rains-essay 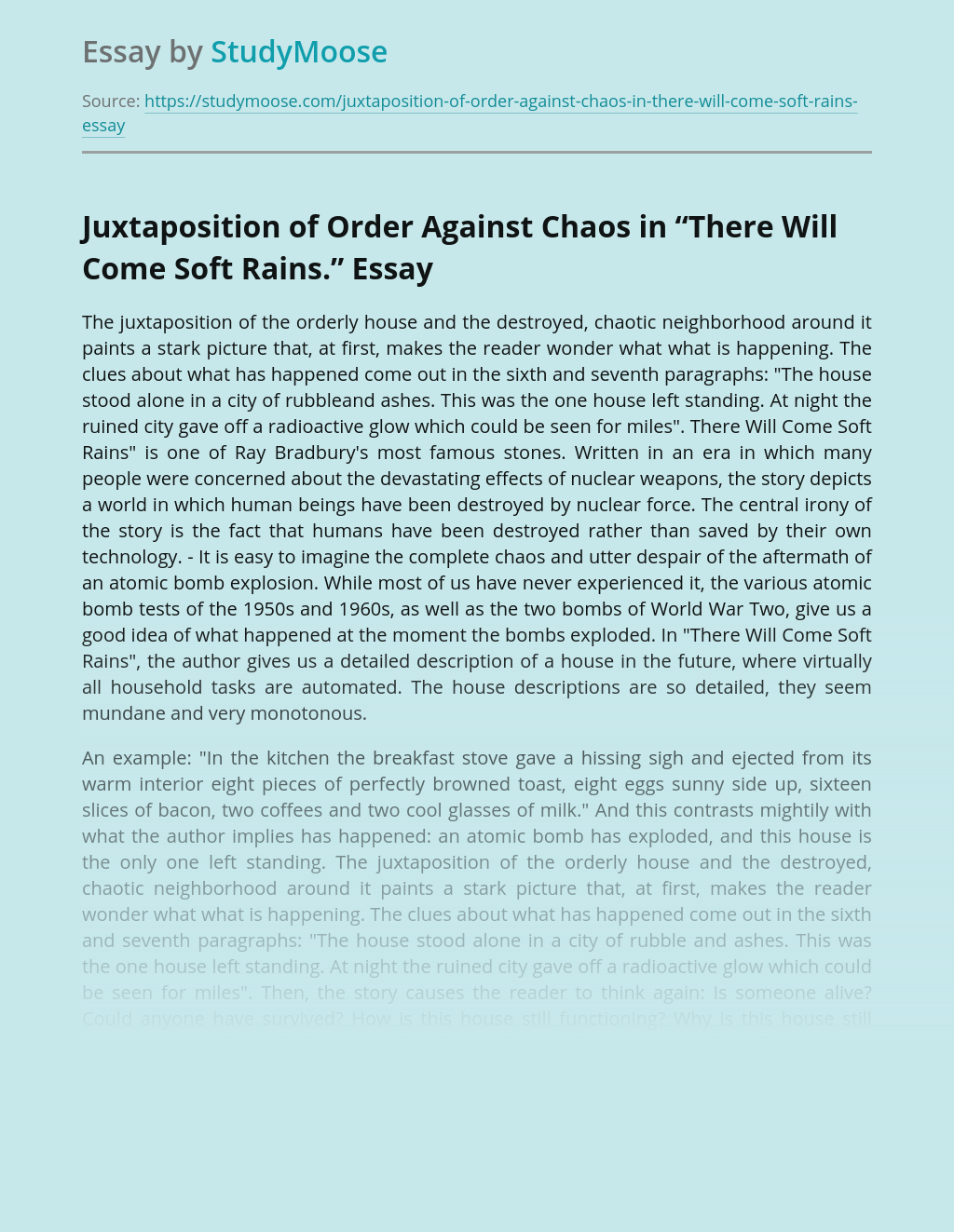