There Will Come Soft Rains by Ray Bradbury

Ray Bradbury’s short story, “There Will Come Soft Rains,” set in a quiet Californian suburb during the month of August 2026, ultimately develops into a struggle between nature and technology. As the nearby city of Allendale lies silently in a pile of rubble and ash, a single house stands alone, existing within itself. The world around this lone house is very disturbing, yet serene, and creates a contrasting aura for the reader as he learns of tale’s message. As the reader confronts the living house, he is greeted with many futuristic and fantastical ideas that “become tragic symbols for man’s dreams and hopes gone awry”.

Don't use plagiarized sources. Get your custom essay on
“ There Will Come Soft Rains by Ray Bradbury ”
Get custom paper
NEW! smart matching with writer

He is also exposed to the image of the fate of humans if technology continues to take over our lives. This idea relates to the theme of the story by showing an example of how a benefactor can quickly become an archenemy. What may one day help us, technology for example, may another day destroy us.

The story opens on a serene summer morning. One house is left standing after a huge disaster, probably of some nuclear force, destroyed the rest of the city. The house keeps living in its own world as if nothing ever happened, making breakfast for its family and readying the car for the usual morning commute. Computerized voices heard throughout the house remind the inhabitants of appointments, birthdays, and holidays. The reader thinks this day is not unlike any other and that all is serene until he reads of the disastrous condition covering the remainder of the surrounding world.

Still, the house keeps going as if it is the Energizer Bunny. Voices flowing out of the front door query surviving animals, “‘who goes there? What’s the password?'”. The animals that seek the house as refuge from the disaster are turned away as the abode shuts itself up to quietly live out the rest of its existence.

Now, the reader may infer that the house is simply an entity within itself; however, the reader is shown signs of earlier existence in the house. He stumbles upon the description of silhouettes, belonging to a family playing in their yard, that have been blasted into the paint of the house. They serve as another symbol to the fate of human existence due to the fault of technology. The silhouettes add to the house’s character by showing the reader the people that it housed and illustrate theme by showing the reader a victim of something that was once thought to be a good thing. Although there are no human characters, the anthromorphic house is considered the main character. Productivity, reliability, and good programming characterize the abode, but these features are all for naught since there is no one present to take advantage of them. The house is personified and shows the reader that it keeps on living even though nobody is left to depend on the house.

At this point, the family dog arrives at the front door. It is described as being “once huge and fleshy, but now gone to bone and covered with sores”. The house recognizes the pet’s pathetic whimper and lets him in. Sadly, his entrance does not produce sympathy from a loving family. Instead, it merely generates computerized mice zipping angrily behind him cleaning up his unpremeditated mess. This occurrence displays the ironic characteristics of the house, as it acts human, but cannot have any emotional feeling. The dog then goes alone into a room, where it passes away, and computerized “maids” retrieve his body and take it to the incinerator. The author describes the dark furnace as an “evil Baal in a dark corner,” which is an allusion to an evil god mentioned in the Old Testament of the Bible. From here, the reader ventures into the nursery.

Many animals of different colors represent color archetypes that symbolize hope for a new beginning, serenity, and peace, which are all associated with infants, the primary users of the nursery. A light voice softly permeates through the study. “‘Mrs. McClellan, which poem would you like this evening?'” Since there is no reply, the voice goes on to explain that it will choose a random poem by the resident’s favorite author, Sara Teasdale. Ironically, Sara Teasdale, a well-known American poet, committed suicide in 1933. This is one of the most dramatically ironic points in the story; the effect of stress on her life represents the effect of technology on humans. The poem, which ties in the theme of the short story, describes how nature will move on and stay alive, even after the disappearance of humans. Then, the awaiting cigar and chairs are drawn away, the house ready for its next command.

The next command, however, never comes. Nature enters the serene technological Shangri-la, bringing a tree branch crashing into the kitchen window. A large fire erupts, which represents the constantly burning battle between technology and humans. The house attempts to save itself, nearly
prevailing, but then nature takes the lead and defeats the house, demonstrating theme once again and depicting the archetype of “The Fall.” The incredible house, once a paradise, becomes a flat pile of nothing overnight. These events occur at night, representing death of humanity and darkness from the results of technology. The overall representation in this piece is the fact that nature will eventually prevail over technology. The house symbolizes the mechanistic world that will eventually destroy humankind if we do not control what we do with our technology. It also illustrates how machinery can never replace humans, ironically represented by the house, which has human instincts, but proves it to be only an imitation of human interactions with nature.

Utilizing tone, Bradbury shows the reader his ideas of humans’ ignorance of technology through this piece. He also tells the audience his views of technology as an interesting, yet dangerous thing. The reader should realize the seriousness of this problem and how technology can obliterate the human race. Should this happen, nature will start itself over again and the cycle will continue unless we stop it. The story allows the reader to use his or her imagination to see how humans have created monsters that cannot only destroy us, but also destroy much of nature along with us.

The house, personified as the protagonist, has many small parts working to keep it in homeostasis, but eventually falls victim to its own lack of balance with the natural world. All of these things confirm that things can work together for the benefit of either good or evil. In one editor’s views, “the central irony is the fact that humans have been destroyed rather than saved by their own technology”. The story indicates that even the highest level of technology can never work as well in balance as nature. Although many currently believe technology plays an important part in Earth’s future, it may in turn ruin it.

There Will Come Soft Rains by Ray Bradbury. (2016, Jul 05). Retrieved from https://studymoose.com/there-will-come-soft-rains-by-ray-bradbury-essay 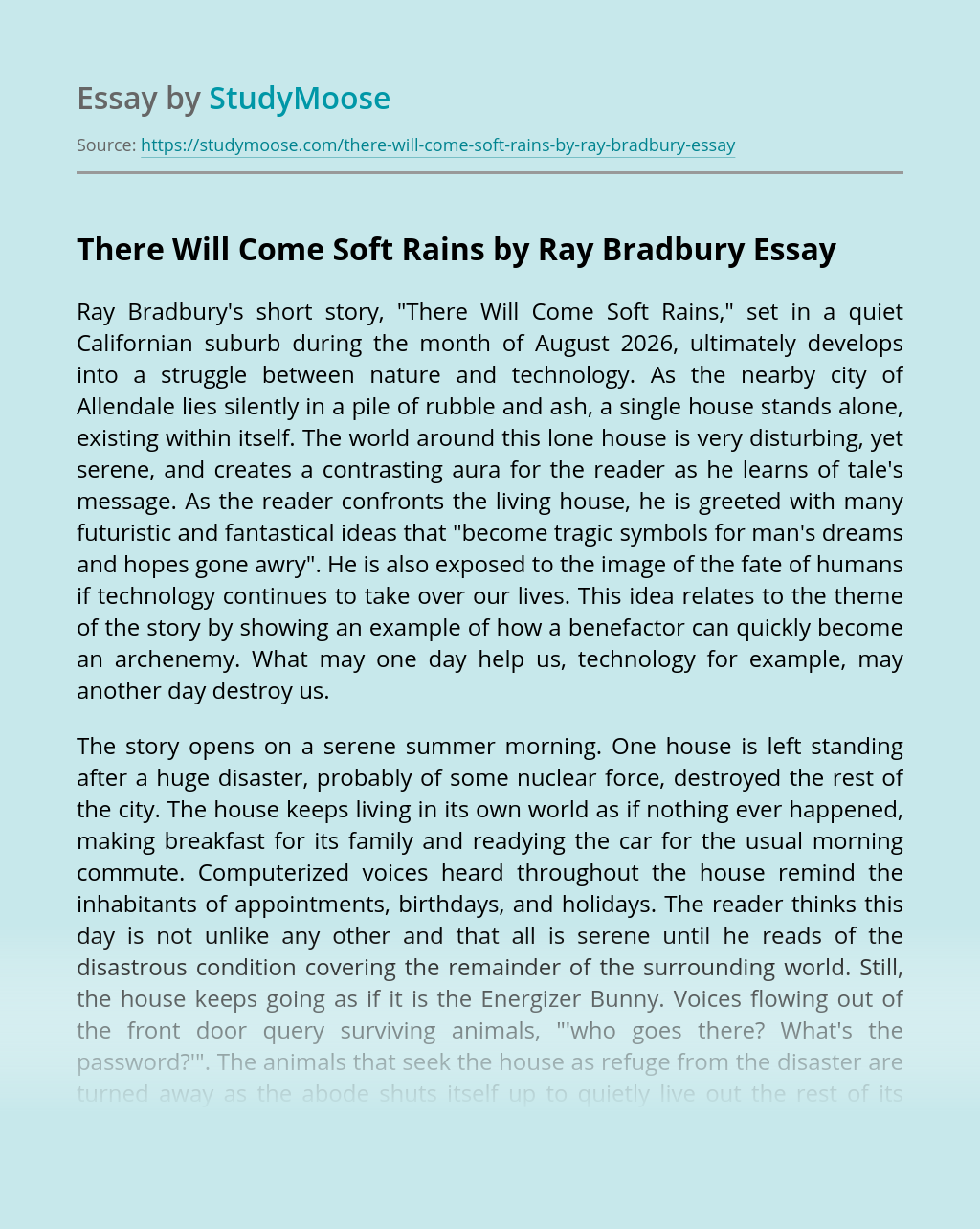