Many of Ray Bradbury’s novels tend to focus around the idea that humans downfall will be due to the increased attention to technology and machines are incapable of human emotion. Unlike most short stories, “There Will Come Soft Rains” does not have any human characters. It is just an automated house. The house performs a routine, similar to a human’s. It makes pancakes, cleans itself, reads poems in the study and more. But for whom? The family that used to live in the house, and the surrounding area, has been wiped out by a nuclear blast.

Don't use plagiarized sources. Get your custom essay on
“ Ray Bradbury’s “There Will Come Soft Rains” Analysis ”
Get custom paper
NEW! smart matching with writer

The house does not realize and continues as if nothing is wrong. As the story draws to a close, a tree limb breaks through a window, beginning a chain reaction and starts a fire inside the house. The house desperately tries to save itself, but fails. Ray Bradbury’s “There Will Come Soft Rains” presents many themes, including that human values are becoming lost, arguing that people cannot control their outcome; however, the greatest truth presented is that nature will live on without humans and humanity.

Throughout the short story, the idea that human values are becoming lost is prominent. Human feelings, such as sorrow and joy, are only possessed by humans. At the beginning, the only surviving member of the family, the dog, walks into the house extremely sick with radiation poisoning. The dog has tracked in mud and the robotic mice that clean the house are not happy about it. Behind the dog “whirred angry mice, angry at having to pick up mud, angry at the inconvenience” (Bradbury 2).

Instead of feeling sympathy and compassion for the dog, the robotic mice are “annoyed” at the mess he’s made. Say a human were in the house, they would find treatment for the dog or at least feel sympathy for the dog’s situation. However since the mice are robotic, they are incapable of feeling these emotions. They are simply “angry” at having to pick up the mess, and shortly after, the dogs corpse.

In an essay by Jennifer Hicks, the author discusses the different images in “There Will Come Soft Rains” and their negative connections. In the story, everything is computerized, including the kitchen appliances. She discusses a “stove that cooks by itself, a miracle we all might want, unfortunately creates ‘toast that was like stone’” (Hicks 236). The stove makes the majority of the food in the house for the family. But unfortunately, it lacks the ability to cook the toast to perfection; it is programmed to make it hard as a rock. People are able to cook their own toast to the way they want it. As the story draws to a close, a fire breaks loose in the house and burns everything in its path. The narrator describes the fire as “…crackl[ing] up the stairs” and “…feeding on Picasso’s and Matisse’s” (Bradbury 3). Picasso and Matisse have produced some of the most valued masterpieces that have ever been created and the fire just burns them away. Machines and robots are not human and therefore cannot posses human qualities.

Ray Bradbury suggests that when humans try to change nature, they will meet similar outcomes just like when they try to change their fate. While the house is going through its daily routine, the narrator stops to describe the setting. He describes the house standing “alone in a city of rubble and ash…[and the] one house left standing” (Bradbury 1). From the excerpt, it can be determined that a nuclear explosion has occurred and the entire city has been reduced to “rubble and ash”. The nuclear bomb was originally developed to protect the people of the United States. Bradbury is telling the readers that what humans create to “protect” themselves will ultimately bring their downfall. As the story progresses, the narrator describes the incinerator in the cellar.

Bradbury compares the “sighing of an incinerator which sat like evil Baal in dark corner” (Bradbury 2). The incinerator in the cellar is compared to Baal, a false god created by humans. In this situation, Baal is a symbol for human’s creations and their stupidity. Therefore, he represents any other technology in the house. According to the Bible, anyone who worships a false god will be condemned to an eternity in Hell. Since the people in the house relied on technology for every aspect of their life, they were “worshipping” the technology and ultimately met their demise. Robert Peltier discusses the dangers of technology presented by Bradbury and how humans need to base their lives on arts and humanities rather than technology and objects humans create.

Peltier states that “of course, Bradbury is really asking us to make judgments about our own lives and the monsters we create to make our lives easier…and to make us feel safe in a world where we are destroying nature with our greed and arrogance” (Peltier 237). The “monsters” Peltier is referring to, are the machines humans use on a daily basis. These demons ultimately bring the downfall of the people, and very possibly the entire world. As humans try to change their existence in an attempt to make their lives longer or more prosperous, they inadvertently make their lives shorter. When humans attempt to play God and change their fate, sooner or later they will bring about their own demise.

The most prominent theme throughout “There Will Come Soft Rains” is that nature will live on without humans. In the story, there are no humans and nature moves on as if they were never even there. In the middle of the story, the house reads a poem that speaks of nature and war. It reads, “ And not one will know of the war, not one/Will care at last when it is done” (Bradbury 3). Similar to the story, a catastrophic disaster has struck and humanity has been wiped off the face of the Earth, but nature lives on and does not care that humans no longer exist. This is an example of irony because a similar tragedy has afflicted Allendale. Donna Haisty discusses the multiple themes presented in the short story. She discusses how Bradbury “illustrates humankind’s powerlessness in the face of natural forces” (Haisty 3). As the story draws to a close, a tree branch crashes through a window, spilling a bottle of cleaning solvent, which ignites a fire.

The fire, being a force of nature, is unconquerable by the mechanized house, a human creation. The house symbolizes humans and their trifling creations while the fire symbolizes the unconquerable quality of nature. When the new day breaks, Bradbury describes it as Dawn showing “faintly in the east…even as the sun rose to shine upon the heaped rubble and steam” (Bradbury 4). After the fire completely destroys the house, the sun rises to a new day. A rising sun is archetypal for rebirth and in this situation; it is rebirth for the world after the attack. Instead of being a rainy and gloomy day, the morning is bright and joyful. Throughout the story, it is evident that humanity is not necessary for the world to exist. Through the duration of “There Will Come Soft Rains” the themes of human values being lost due to humans trying to change their outcome and the idea that nature will live on without humans is very prominent. It must not be forgotten that human values can never be programmed into a machine; humans cannot change their outcomes, lest they should bring their doom nearer, and that nature has no regard for trivial things such as humans. 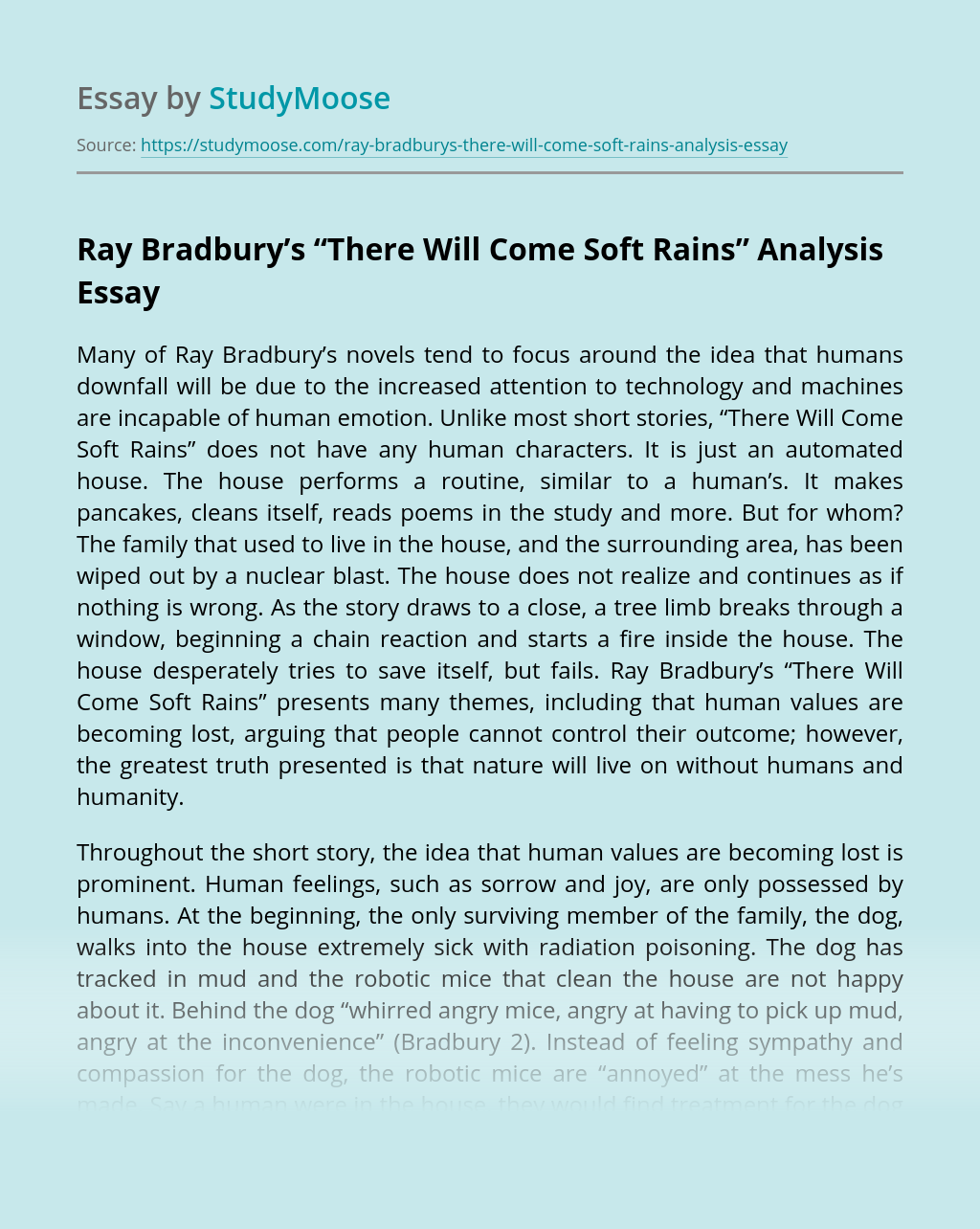