There Will Come Soft Rains

There Will Come Soft Rains is about a house. The house is fully automated. Everything from the garage door to cleaning mice is automated. As the day goes on, the house recognizes to time and starts tasks at certain times. The house can recognize the dog’s bark and let it come inside. It also has a weather box, which determines the outside weather and plays a song or poem. The house may be automatic but there are no people around to live in it.

Don't use plagiarized sources. Get your custom essay on
“ There Will Come Soft Rains ”
Get custom paper
NEW! smart matching with writer

The house asks for input but after a long period of silence the house picks out of a random list.

Even though there is no one living in the house, the house still cooks all the meals, which are thrown away and the plates washed. The story takes place in Allendale, California in 2026. The house is the only one left. All of the others were destroyed in the nuclear explosion. This also killed all the people.

Proficient in: There Will Come Soft Rains

Some people’s shadows were burned into the side of the house. So even though the people are gone, the house still carries on. The setting is the most important aspect of the story. Since there are no people, the house is the main character.

The dog had remained living but finally died in the house, the mice cleaned up the body and moved on. Technology is developed by humans who posses emotions. These emotions are what separate humans from other animals. These emotions can’t be removed from the technology that the humans build and develop.

Ray Bradbury tries to convey the idea that technology is not the answer and that the emotions in them can’t be destroyed. At the end of the story, where the house is destroyed by fire caused by a fallen tree, the house is demolished and there is total destruction of the technology. The only part of the house still standing is a wall that has a voice recording that keeps repeating the date. Even though technology is gone, nature is continuing without any remorse. This science fiction story basically describes nature as the unrelenting force in the world.

There Will Come Soft Rains. (2020, Jun 02). Retrieved from https://studymoose.com/there-will-come-soft-rains-new-essay 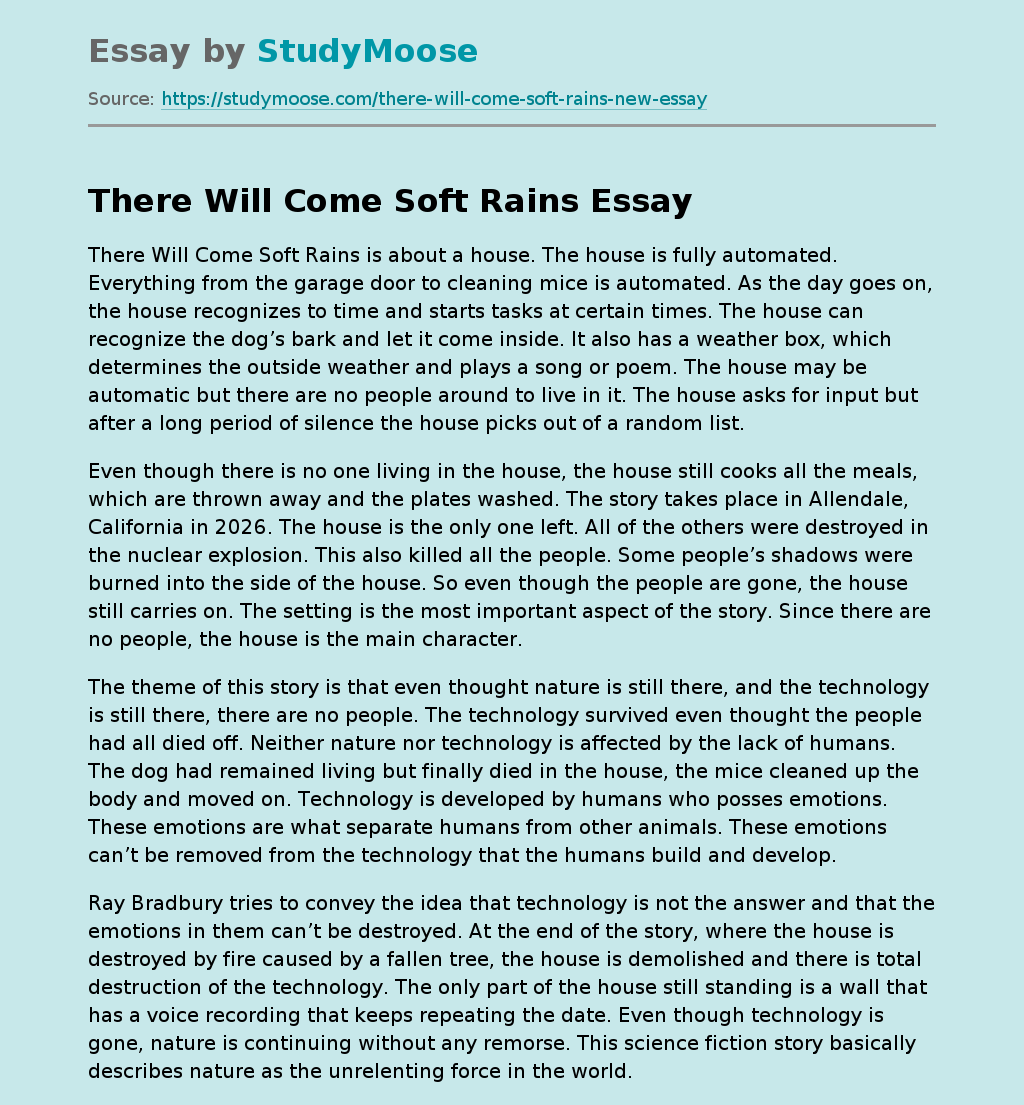