There will come softs rains, written by Ray Bradbury, focuses on a single house standing after the nuclear attack in California year 2026. The irony in the story is that technology has destroyed humans. The story has no characters and portrays a world where robots replace human jobs. They are scheduled to cook, clean and garden. Throughout the text, Bradbury demonstrates how technology could doom humans to extinction.

I believe it is the conflict between human beings and machines that create the heart of the story.

Turn in your highest-quality paper
Get a qualified writer to help you with
“ Ray Bradbury’s “There Will Come Soft Rains” ”
Get high-quality paper
NEW! AI matching with writers

I was drawn into the idea that humans have the potential to bring about both construction and destruction. I realised that our own creations can be used against humanity. Also, this allowed me to imagine the desolation of a world without people. My understanding of this aspect helped me to understand an important message targeted towards our generation. Throughout, Bradbury gives a timeless statement. I felt that he was trying to explain that ignorance and lack of awareness cannot protect any individual from the truth.

Even if attempts are made to shield oneself from the harshness of reality, there can be no immunity to it. I think this message is incredibly relevant to today’s society as we are constantly shielding ourselves from reality using technology as a barrier. I believe humans have become increasingly dependent on technology; we have put in too much faith in the machines we invent. I believe that technology can be a very dangerous thing, and in our future technology may turn its back on us.

Bradbury demonstrates a world of technology and proposes that humankind is destroyed by its own arrogance. The story reflects how far the world has come to revolutionize itself, especially since the 1950s. There Will Come Soft Rains gives a glimpse of what’s to come, and for us living in 2019, 2026 is the near future. We are only delaying the inevitable.

With no human interaction and characters in the story, I imagined the story to be nothing but dull and depressing. However, Bradbury’s use of similes and personifications were the highlight of my reading experience. His use of diverse literacy techniques influenced me in a positive way as it helped me to create imagery in my head. An example that created repulsion in me was when he describes the ‘nerves’ of the house were ‘revealed as if a surgeon had torn the skin off to let the red veins quiver in the scalded air’. I found this simile very confronting to read and helped me to identify the house as a human being. Bradbury poetic imagery personifies the house. In addition to this, I was able to understand his purpose of using smiles. Personally, I felt that Bradbury was trying to evoke empathy from the reader. This is because he assumes the reader who identifies with the house may feel loneliness and imagine the pain of having one’s skin torn off. For me, by describing the house in human terms, I was able to show my empathy for the house. In a story with no human characters or interaction, the similes are what creates an impactful and sophisticating read.

There will come soft rains sends another important message for people in our society. As I was reading, I was brought upon a particular warning about nuclear weapons. The text helped me to understand the significance of nuclear weapons and the historical context. This text is set in an era where the people were concerned about the effects of nuclear weapons. By the time of 1950s people had a clear memory of the atomic bombing of Hiroshima, Japan August 1945. To date, this event is still significant in our history. I think Bradbury is foreshadowing events that may occur in our future and that will have a detrimental impact on human society. The central irony of the story is that technology has destroyed humans. Today, the most urgent issue facing United States is that a nuclear weapon could be used as a device of war and terror. If we are to avoid this catastrophe its unpredictable environmental, social and economic effects must be addressed for our safety. Bradbury futuristic story sends readers something to think about, which makes the story relevant and important read to our generation.

Personification in There Will Come Soft Rains

What would the world be like if humanity vanished? This is the theme of Ray Bradbury’s story “There Will Come Soft Rains”. All of the characters in the story are devices, which through personification take the location of human characters. The style of male’s destruction resounds throughout the story. Bradbury uses personification to explain the mechanical creations of man that eventually cause the story’s theme of the destruction of humanity.

There are no human characters at all in the story; instead, there are devices with human characteristics. Miller keeps in mind that personification is constantly utilized to explain your house’s actions (1 ). This is seen in the very first line of the story,” In the living room the voice-clock sang, Tick-tock, 7 o’clock, time to get up, 7 o’ clock! as if it hesitated that nobody would” (Bradbury 76). The distress of the voice-clock offers it a humanoid impression, which permits it to take the place of human characters. Another fascinating example of personification is seen in the method that Bradbury explains the robotic mice. “Behind it whirred angry mice, upset at needing to get mud, upset at hassle” (Bradbury 77).

Nevertheless, makers are incapable of feelings. Hicks observes that readers are reminded that the rodent readers are mechanical, which sensations-“those highly praised human feelings”-can not exist in devices (234 ). In truth, there is only one living character in the whole story. As Jennifer Hicks points out, the only live being in your house is the pet, who gets in mid-story (234 ). The dog is not extremely seemly. “The pet dog, once big and fleshy, and now gone to bone and covered with sores, moved in and through the home, tracking mud” (Bradbury 77). It is pitiful and dying, much like the human race.

Life after the destruction of man is the main theme of the story. It is hinted in the story that an atomic bomb was the cause of man’s demise. Bradbury does not blatantly tall the reader that an atomic catastrophe occurred, but reveals it by describing the house and its surroundings (Miller 6). The reader is told that, “The house stood alone in a city of rubble and ashes. This was the one house left standing. At night the ruined city gave off a radioactive glow which could be seen for miles” (Bradbury 77). The “ruined city” and “radioactive glow” give readers enough clues to conclude that atomic warfare was the cause of man’s downfall. While it is known that the earth is now empty, Bradbury also indicates that it was empty before the bomb. Peltier suggests that this world was empty even before the destruction, with mechanical mice vacuuming and a sing-song clock telling time. The dull, mechanical world was empty long before people were taken from it (238). This can be seen in the nursery, where “Animals took shape: yellow giraffes, blue lions, pink antelopes, lilac panthers cavorting in crystal substance. The walls were glass.

They looked out upon color and fantasy” (Bradbury 78). Children do not even go outside to enjoy nature, but watch it on their mechanical walls, their lives growing more and more hollow and empty. Another point that Bradbury makes is that if man disappeared, nothing would care, or even notice. Peltier explains that “The title of the story, taken from the poem quoted within it, suggests that if humankind were gone, nature would not only endure, but it would also not even notice our disappearance” (237). Sara Teasdale’s poem best illustrates this. “And not one will know of the war, not one/Will care at last when it is done./Not one would mind, neither bird nor tree,/If mankind perished utterly;/ And Spring herself, when she woke at dawn/ Would scarcely know that we were gone (Bradbury 79). Indeed, life would go on after mankind, and would go on peacefully.

Therefore, Bradbury’s use of personification describe the machines that eventually lead to the story’s theme of mankind’s destruction. Personification allows the machines to show us what the people who owned the house were like: cold, impersonal, and oblivious to the outside- characteristics that led to both man and machine’s downfall. The author uses the story’s theme of the destruction of man to show readers the effects of becoming too dependent on machines and withdrawing from nature and the world. The chilling thing about Bradbury’s story is the acknowledgment of human dependency on machinery today, and the realization that in such a technologically advanced world, the story could easily become reality. 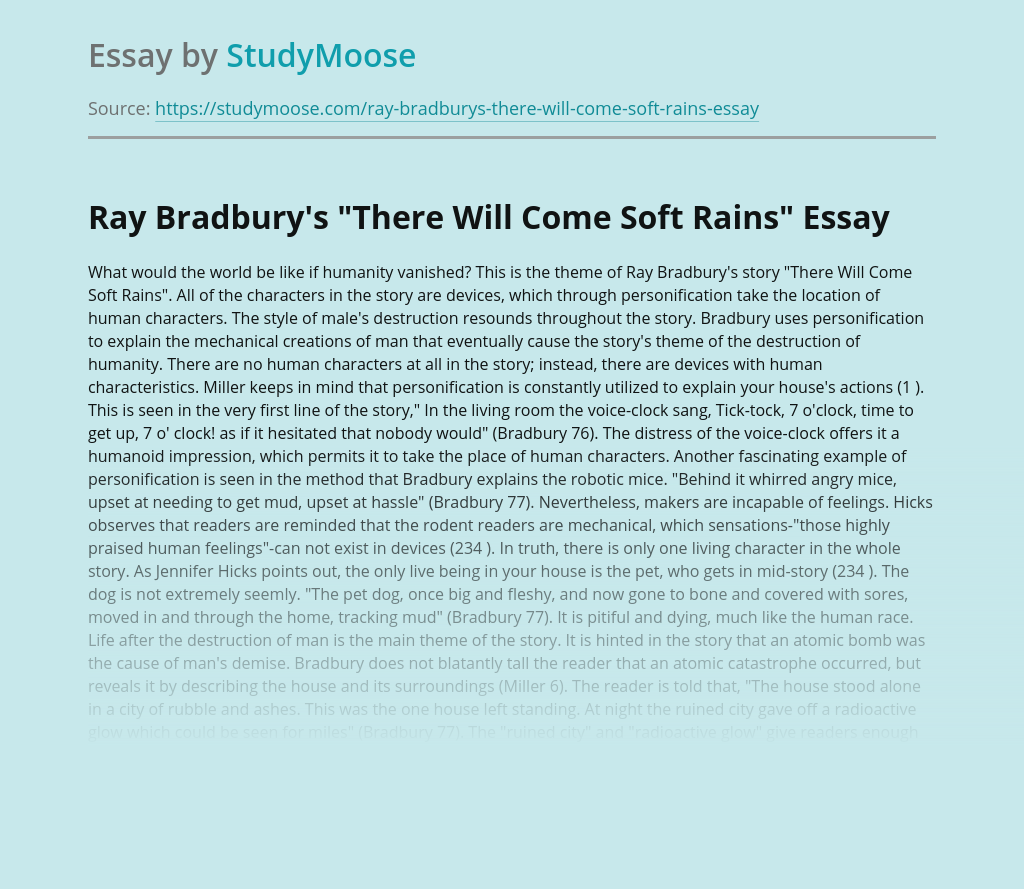 Turn in your highest-quality paper
Get a qualified writer to help you with
“ Ray Bradbury’s “There Will Come Soft Rains” ”
Get high-quality paper
Helping students since 2015
Stay Safe, Stay Original