No one person is perfect

No one person is perfect. Mistakes, just like water, are an essential part of life. It’s not for our faults that we should be judged; rather it’s the way we learn to accept our human nature and change for the better. In Nathaniel Hawthorne’s Puritanical novel, The Scarlet Letter, the main character, Hester Prynne, commits an offense of infidelity against her husband, Roger Chillingworth. From then on her secret affair with the Puritan minister will always be on her mind considering the degradation she was subjected to and the infamous letter that will be forever embedded on her bosom and her child Pearl — the fruit of her sin.

Don't use plagiarized sources. Get your custom essay on
“ No one person is perfect ”
Get custom paper
NEW! smart matching with writer

Hester was a woman that was well ahead of her time; she displayed the traits of being courageous while being passionate and independent. An attribute that takes someone to be courageous, passionate and independent is strength, which is required for one to endure. These were traits that were uncommon for a woman to possess during the time when Hawthorne wrote this novel, but even more unusual to find in a woman who was convicted of committing adultery.

Hester Prynne displays her trait of courage and passion when she stands up to Governor Bellingham. Bellingham and his assistants confront her custody of her daughter Pearl because they think it would be better for Pearl to be raised in a more Christian-like household. But Hester, being bold and strong, stands up and responds, “I can teach my little Pearl what I have learned from this,” (107) referring to the scarlet letter.

Bellingham then follows by indicating that the letter is precisely the reason for wanting Pearl to be removed from her care. This is a remarkable scene, where it is rare to see an aberrant adulterous woman speak up for herself to a person of much higher authority. But, eventually Arthur Dimmesdale, Pearl’s unidentified father, preaches on Hester’s behalf and persuades Bellingham to permit Hester continue her care.

Early in the novel, Hawthorne explains that Hester was forced into a marriage to a man she did not truly love, and after being separated for a long amount of time, she became attracted to another man. Then later, she became a victim of a crime, which she was severely punished, despite the fact that she could only be accountable for half of the incident. Hester was much stronger and more courageous than her partner in adultery. Arthur Dimmesdale her secret lover was a minister in a Puritan church, who hides his sin from his congregation in order to maintain his reputation. He tells Hester, “happy for you Hester that wear the scarlet letter openly upon your bosom!

Mine burns in secret (177).” Meanwhile Hester had enough audacity to stand alone with out a known partner in crime. She respected Arthur’s decision to stay silent without a word against him. Yet Hester accepted the consequence that came along with committing adultery. While learning to live life after the embarrassment she went through at the scaffold and the life long punishment of having to wear the embedded letter “A” on her chest. That scarlet letter made her stronger, and a woman to be later admired from her Puritan counterparts.

In the early chapters of this story, Hester’s social life was virtually eliminated as a result of her shameful history. Knowing that all she had after she walked out of the prison door was her letter on her chest and beloved daughter Pearl by her side. She brought home her income by working as the town seamstress. Hester devoted the remainder of her time for creating garments for the poor. Overlooking the fact that they treat her badly in spite of her good intentions. She was even the object of ridicule to young children who crept up to her house to spy on her.

But through the seven years since she had Pearl, Hester’s reputation changed. She was a woman full of passion for the needy and everyone else who befriended her. If asked about the woman with badge, strangers would respond, “…the town’s own Hester, who is so kind to the poor, so helpful to the sick, so comforting to the afflicted! (159)” Hawthorne goes as far to state that, “the scarlet letter had the effect of the cross on a nun’s bosom.” This effect gave her practically access into every home. The “A” which formerly stood for “Adultery,” took on another meaning to the townspeople, to them it meant “Able” (158). For Hester to change her façade from an adulterous woman to a woman everyone loved.

Hester’s “badge of shame,” made her a stronger person. The symbol made her stronger because she had to walk through town being harassed by the inhabitants of Boston. Yet, Hester wore the letter with pride and courage that it would not get her down and she did live her life in solitude but yet transformed it in to being a successful seamstress which provided support for her and Pearl. From the appearance of it she turned a demeaning scarlet letter into a well-tailored accessory by embroidering it with gold thread. Hester was also aware that her sin was immoral, but by being open about it she was able to become a stronger person. Hester proved that by repenting and repelling sin, it is capable of making one stronger. Hester was truly an “Able” woman.

No one person is perfect. (2016, Jun 25). Retrieved from https://studymoose.com/no-one-person-is-perfect-essay 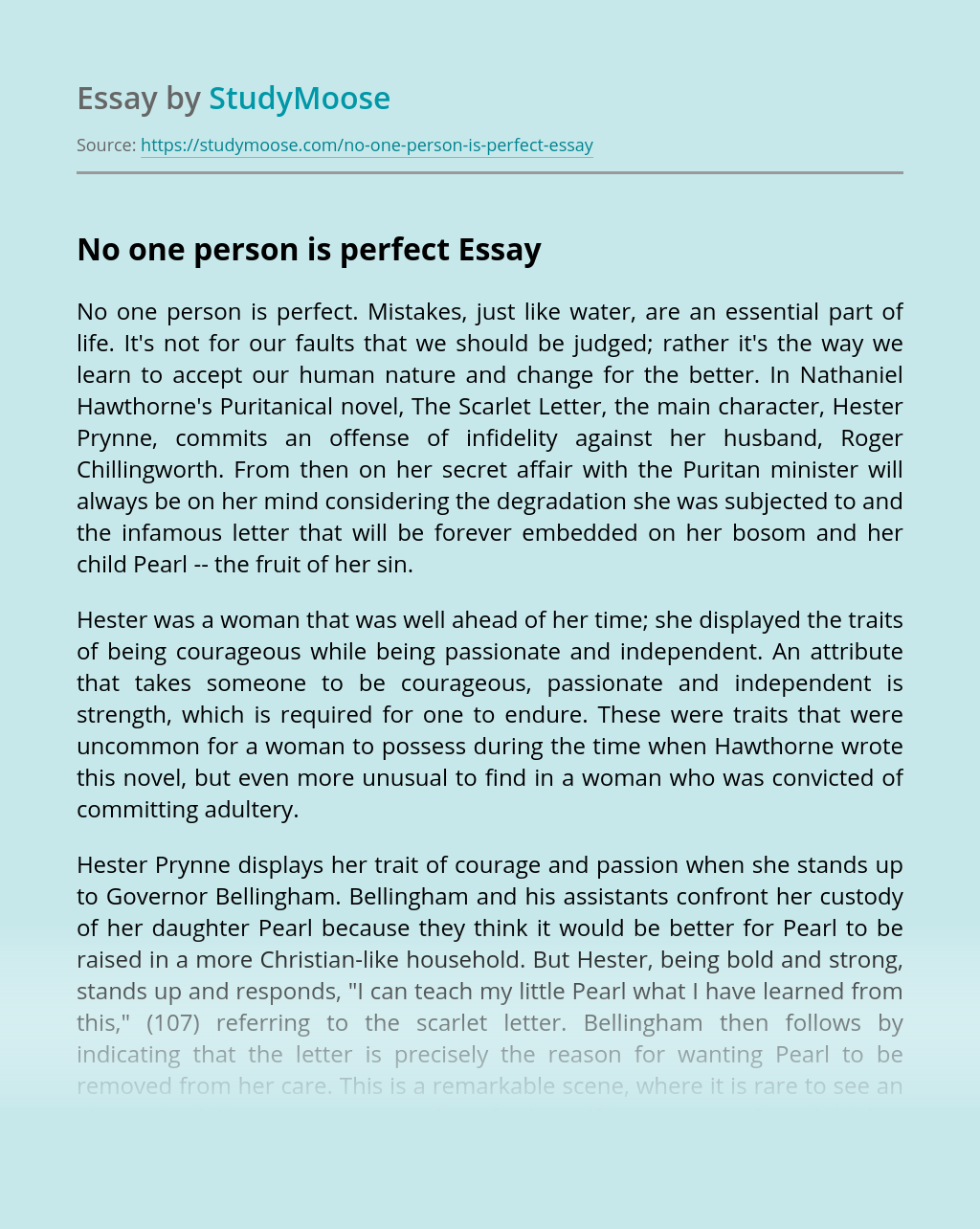