Jurassic Park: Absurd Chaos The main story of Jurassic Park written by Michael Crichton is about genetically cloned dinosaurs who break loose. Confusion and complete disorder occurs throughout the story of Jurassic Park. In the story, the theme of chaos is unpredictably built in the human’s lives. Dr. Ian Malcolm predicts that having dinosaurs in Isa Nubla will cause disaster. If the animals are released to the island, they will be a liability because they will disrespect nature. Malcolm is the most famous mathematician who predicts chaos countless of times in the park.

Don't use plagiarized sources. Get your custom essay on
“ Analysis Chaos in Jurassic Park ”
Get custom paper
NEW! smart matching with writer

The reeding of dinosaurs are the main cause that create chaos and destructs Jurassic Park. Malcolm foresees that the creation of dinosaurs is not a smart idea, for it can cause unpredicted behavior. Malcolm is a scientist who is outgoing, egoistic and has the knowledge to create new ideas. Malcolm states that it is ‘”an attempt to recreate a natural environment from the past” (Crichton 92). Dinosaurs are known to be as an ancient species that only existed long ago.

Having the idea creating dinosaurs in Jurassic Park is bizarre to humans.

Nature is the biggest problem Jurassic Park has at becoming successful. Having the idea of using the dinosaurs as the park entertainment on an island is Just sounds like a major trap under no circumstance. Malcolm’s calculation has gradually built up the story more precise. As stated by Dr. Malcolm in the book, he said “Life will find a way”(139). He meant that the dinosaurs will find a way to live the way they want.

This is something that scientists didn’t think about when they brought dinosaurs back to life.

The scientists didn’t think about the way that nature would want to live and decided that they could control it. Dr. Malcolm uses the chaos theory to predict the collapse of the park. In the beginning of the book Malcolm is introduced to the story. One of the first things Dr. Malcolm talks about is the chaos theory. In the first conversation with him in the book Malcolm said, “Theory tells me that the island will quickly proceed to behave in unpredictable fashion”(76). What Malcolm means by this is that without even visiting the park he can say that it will fail.

Dr. Malcolm is a problem in the story because convinces other people that Jurassic Park is a bad idea. Dinosaurs represent unnatural habitats to the current society. However Hammond, a billionaire developer, decides to breed dinosaurs in the park. Dr. Hammond’s main conceptual idea is to earn a lot of money from the rich tourists so he can build more Jurassic Parks in other countries. He is self centered, greedy and stubborn who is unaware that dinosaurs can ultimately cause destruction. Crichton writes, miou know what’s wrong with scientific power?

It’s a form of inherited wealth. And you know what assholes congenitally rich people are” (122). This shows that Hammond’s objective is to gain wealth and not for the sake of saving the environment. He is blind to the fact that recreating dinosaurs will only bring negativity to the current world. Creating more dinosaurs will undoubtedly ring chaos to the park. The cloning of dinosaurs starts from John Hammond. Hammond hired scientists and doctors to make his creation come true. In particular, a scientist named Dr. Wu, a young graduate and whom Hammond hires is beginning work. Dr.

Wu’s objective is to control the number is reproduce dinosaurs in the park. By doing so, he thought that putting genetically mortified frog DNA into the missing DNA in dinosaurs will stop dinosaurs reproduction, but in reality, doing this enables the dinosaur’s DNA to switch genders and have the ability to reproduce. Furthermore, Crichton writes, “All major changes are like death. You can’t see to the other side until you are there. ” (167). After he changed the DNA, the dinosaurs kept reproducing and Dr. Wu and his team had no control over the number of reproduced dinosaurs.

Malcolm mentions, “All major changes are like death. You can’t see to the other side until you are there. “(175). This is where chaos and unnatural catastrophe begins in Jurassic Park. Before the grand opening of the Jurassic Park, Malcolm anticipates that having unnatural species is a tragic demise to Jurassic Park, known as the “Malcolm Effect”. The “Malcolm Effect” theory is when the “island will quickly roceed to behave in unpredictable fashion… There is a problem with that island. It is an accident waiting to happen. ‘” (84).

Overtime Malcolm’s prediction begins appear later on in the story. The author writes, “Living systems are never in equilibrium. They are inherently unstable. They may seem stable, but theyre not. Everything is moving and changing. In a sense, everything is on the edge of collapse “(164). Drastic changes occur when the dinosaurs begin to reproduce and when Malcolm and Hammond engage in an argument. Hammond is relieved that the animals did not get free and overrun the world. Malcolm says that the world cannot be demolished by human’s creation.

Due to the major problem of dinosaurs breeding, dinosaurs are eager to break loose from the Jurassic Park and begin to overpopulate the island In Malcolm’s calculation it says, “Life breaks free. Life expands to new territories”(160). Malcolm thinks Jurassic Park has ‘inherent instability’ or that it is impossible to control even when the analysis is carried out using computer models. The story considers dinosaurs as the most interesting creatures that anyone has ever witnessed. For example, t-rexs, tyrannasaurs, velocipators and triceratops are the ypes of dinosaurs that are chaotic because they use techniques to kill their prey.

The way they use the skills to kill the humans were unique because velociraptor works as a communicative group. Many Raptors may have hunted in packs, often ranging in large numberings. They have a primitive level of vocalization, which enables them to direct attacks and call for help. They are also able to set traps. All the dinosaurs have a right skill sets that can cause chaos. Stubborn scientist, dinosaurs breeding cause chaos. Problems add up and there is not anything that will stop it. Dr. Malcom, Dennis Nedry and the way of nature all caused things to go wrong.

There is not any way to control nature. As Ian Malcolm incorporated chaos theory into his calculations, all of these events were predicted in one way or another. The count of animals was much higher than expected due to reproducing. Animals are able to escape due to the fences when being powered off by Denis Nedry. Systems began to fail and caused substantial problems throughout the book. Ian Malcolm had it right, “Chaos theory proves that unpredictability is built into our daily lives. “(313). There is not any way to control nature. No one can stop chaos once it begins. 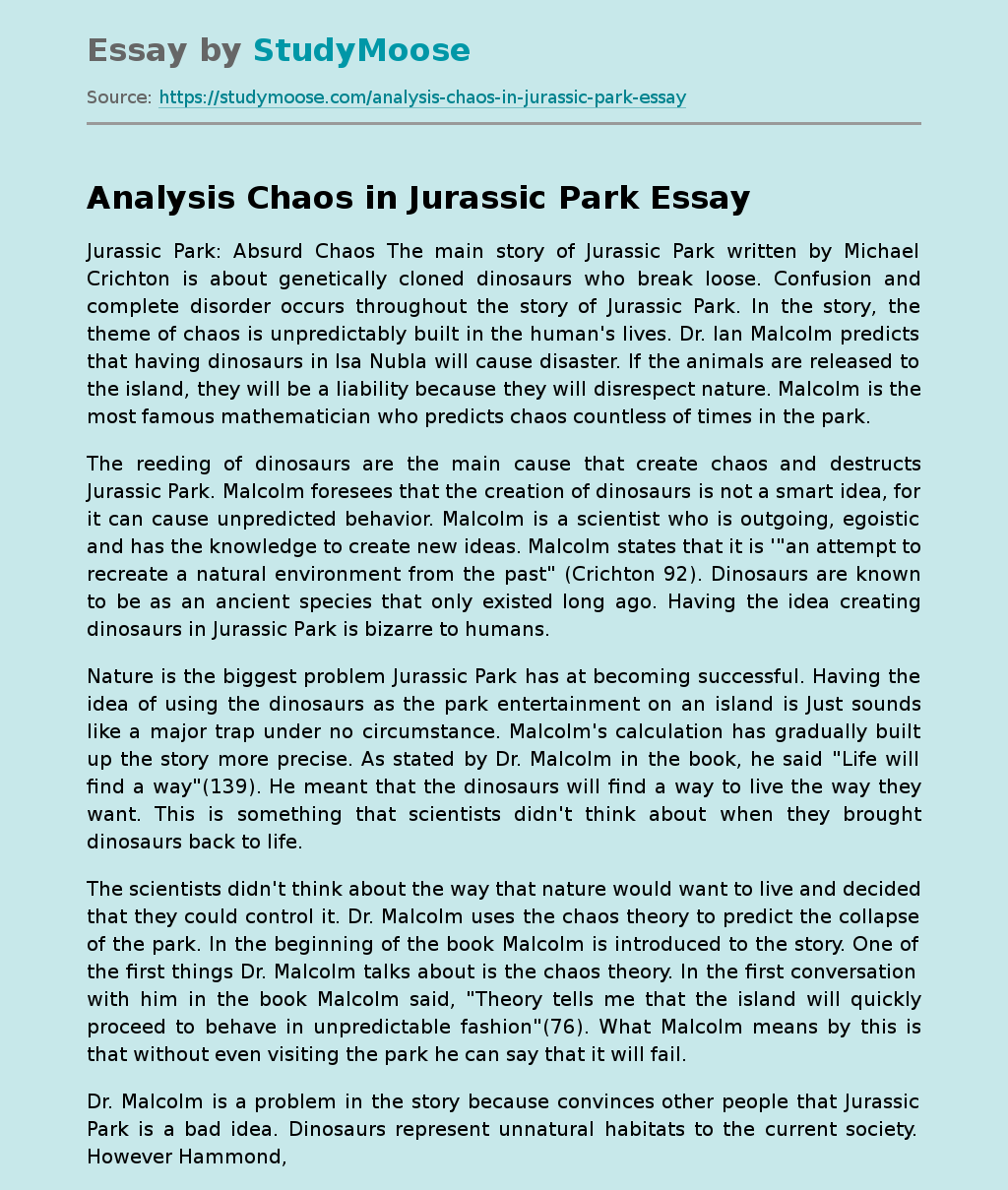