Jealousy in "Othello" by William Shakespeare

Focusing on the dangers of jealousy, the play Othello is a study of how jealousy can be ignited by chance and destroy lives. Othello, the main character falls prey to jealousy when his friend Iago lies to him telling him that Desdemona has been an unfaithful wife. Othello asks for proof but is willing to accept anything as he is no longer abile to distinguish between reality and appearance.

Othello asks Iago to provide “ocular proof” that Desdemona has cheated. He wants to know that it is really true.

Don't use plagiarized sources. Get your custom essay on
“ Jealousy in “Othello” by William Shakespeare ”
Get custom paper
NEW! smart matching with writer

But Iago provides the indirect evidence of the handkerchief and Othello readily accepts this as a substitute for “ocular proof. Spurred by jealousy with only circumstantial proof, Othello ends up killing his wife and himself. Ironically, jealousy is expressed over offenses that did not happen.

Othello is also not the only character in the play that is jealous. The reason Iago chooses to hurt Othello by making him jealous is that Iago is consumed by jealousy himself.

Jealousy causes Iago to set Othello up for downfall. It causes him to show his true self. Jealousy results in Iago’s loss +of sanity and he plots to destroy Othello.

As the only the true innocents of the play, Desdemona and Cassio, seem to exist with out jealousy. Desdemona is innocent because she never did the things that she is accused of doing. She never cheated on Othello. Cassio is innocent and trustworthy. His behavior is rooted in a deep sense of honor. In Act 3, Scene 3, Cassio ask Desdemona to speak with Othello on his behalf.

Desdemona agrees and promises to speak with her husband until the despute is settled and Cassio is recalled as he is returned to his position as lieutentant.

Representing how jealousy is one of the most unscrupulous and destructive of emotions, the theme of jealousy is prominent throughout Othello as it motivates the characters’ actions. Shakespeare proves that jealousy is unreasonable and is based on the emotional issues of the jealous person.

Jealousy in "Othello" by William Shakespeare. (2020, May 08). Retrieved from https://studymoose.com/jealousy-in-othello-by-william-shakespeare-essay 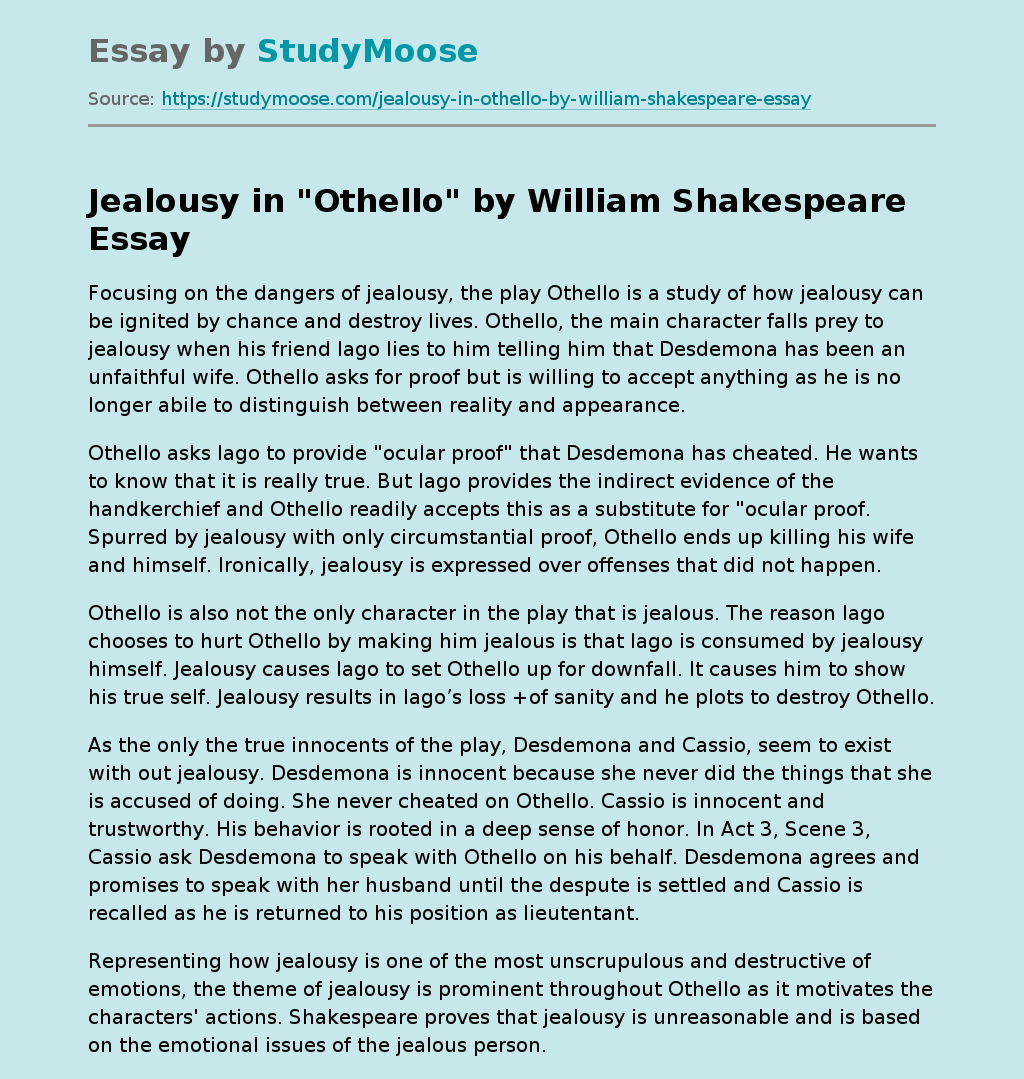