Iago: Forsooth
Iago: Forsooth, a great arithmetician, / One Michael Cassio, a Florentine
Roderigo: To the gross
Roderigo: To the gross clasps of a lascivious Moor
Iago: I hate
Iago: I hate the Moor
Iago: Cassio’s a
Iago: Cassio’s a proper man
Cassio: She’s a
Iago: And, I’ll
Cassio: She’s a most exquisite lady
Iago: And, I’ll warrant her, full of game
Othello: As if
Othello: As if there were some monster in thy thought
Iago: O beware
Iago: O beware my lord of jealousy; It is the green-eyed monster which doth mock / The meat it feeds on
Othello: O monstrous
Othello: O monstrous! O monstrous!
Desdemona: Heaven keep
Desdemona: Heaven keep that monster from Othello’s mind
Othello: Lie with
Othello: Lie with her? Lie on her? [Falls in a trance
Othello: A horned
Othello: A horned man’s a monster and a beast
Othello: O fool,
Othello: O fool, fool, fool!
Iago: did I today
Iago: did I today / See Cassio wipe his beard with.
Iago: I will in Cassio’s
Iago: I will in Cassio’s lodging lose this napkin / And let him find it
Iago: Trifles light
Iago: Trifles light as air / Are to the jealous confirmations strong / As proofs of holy writ:”
Othello: It is the cause
Othello: It is the cause, it is the cause, my soul
Othello: Yet I’ll not shed
Othello: Yet I’ll not shed her blood, Nor scar that whiter skin of hers than snow.
Othello: That handkerchief /
Othello: That handkerchief / Which I so loved and gave thee, thou gavest / To Cassio
Desdemona: I never did
Desdemona: I never did / Offend you in my life,
Lodovico: Your power
Lodovico: Your power and command is taken off 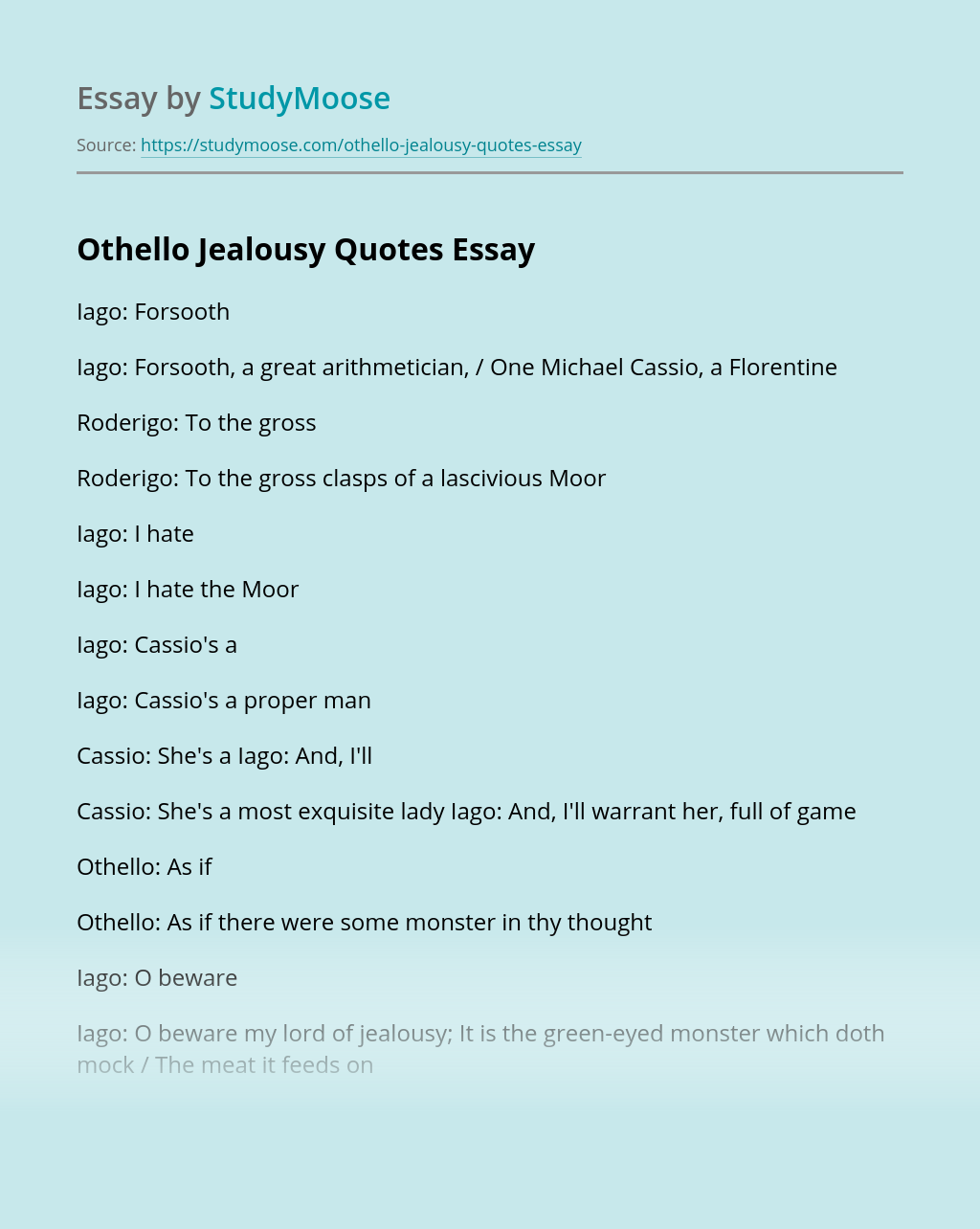 The Devil and Tom Walker: Mood to Theme

In Washington Irving’s “The Devil and Tom Walker”, the imagery creates a dark and disturbing mood which shows the theme of how greed will make some people do whatever it takes to get what they desire. The language or words used to describe things such as settings, a character, or an event can help create... VIEW ESSAY

View sample
"The Half Brothers" By Elizabeth Gaskell

One of the lesser characters of Shakespeare’s play, King Lear, is the character of Edmund. Edmund is the illegitimate son of Gloucester and was loved despite being a bastard child like his brother. In any good play about tragedy, what makes it work is the villain or the emissary of evil. Despite the equal love... VIEW ESSAY

Frankenstein, by Mary Shelley, comprises and exemplifies many signature Romantic tropes. Though Shelley may integrate gothic elements into her story, the core of the novel is one of genuine and heartfelt Romanticism. Almost all Romantic ideals are overtly present and entrenched in the narrative so thoroughly that Frankenstein cannot be said to be anything but... VIEW ESSAY

It is not personal, but mental endowments they have given you: you are formed for labour, not for love…I claim you not for my pleasure, but for my Sovereign’s service.” In the light of St John’s proposal, discuss the importance in Jane Eyre of love and marriage. In Jane Eyre love and marriage are important... VIEW ESSAY