If Justice is relative, depending on personal point of view, how can it be Justice?

The fate of the characters in the tragedy ‘King Lear’ (based on their natures) raises doubts about whether poetic justice or lawful justice is well served. Mostly human justice is flawed by human nature itself, being easily influenced by wealth, power and jealousy, resulting in injustice and evil. Shakespeare portrays in ‘King Lear’ a strong belief in divine justice. As revealed when Edgar states: “the gods are just, and of our pleasant vices make instruments to plague us” suggesting that the ‘pleasant vices’ their humanity possesses blocks the path of virtue, so that the evil we cause turns against us.

Don't use plagiarized sources. Get your custom essay on
“ If Justice is relative, depending on personal point of view, how can it be Justice? ”
Get custom paper
NEW! smart matching with writer

Thus, unless humans choose to live virtuously – given free will – justice will never prevail. This is acceptable though the ‘Gods are just’ aspect becomes questionable. The misuse of justice is witnessed by those in positions of power asserting their authority which is tainted by the foibles human nature.

At the start of the play, King Lear imposes a love test where each daughter has to profess her love in the most elaborate manner in order to receive the largest share of his kingdom: “Which of you shall we say doth love us the most.

That we our largest bounty may extend”. This appears as if Lear would decide the proportions of land that each of his daughters would receive – based on their speeches. However, when Cordelia refuses to take part, Lear laments: “I loved her the most and thought to set my rest” implying he already had favoured her and by allowing such contest he would only arouse rivalry between the sisters.

This could only mean the main reason for Lear’s decision to hold a contest, knowing beforehand Cordelia is whom he wishes to inherit the most, is due to his desire to be flattered. This egoistic attitude is often associated with those who exercise power and authority over others. It is exemplified by Lear’s outrage as he disinherits his daughter: “Here I disclaim my paternal care. As thou my sometime daughter”. In Act 1 Scene 1 we are presented with a father who has confused love with power which affects his judgement. Shakespeare demonstrates a father’s love and fairness affected by his imperfect human nature.

King Lear is an absolute monarch who uses his daughters professed love to boost his own ego. Though the audience realises that actually the reason for the ‘love test’ was perhaps Lear’s egotism, from the character’s point of view it can be viewed as a just method of arriving at a decision – a ‘trial’ of sorts, which the King might use to deal with matters of concern. Thus justice is also portrayed as a play of custom- where different authorities can claim justice in their actions from their own perspectives. We learn that Lear does not accept flaws in his judgment as in Act 2 he protests: “I gave them all” and thus he expects to be shown their gratitude in equal measure to what he has given and sufficient respect from Goneril and Regan.

Further building on the theme of – ‘the powerful abuse the issuing of justice’ -we are presented with flaws in lawful justice. Cornwall and Regan along with her sister Goneril, who are in power, brands Gloucester as a “filthy traitor” and unlawfully punish Gloucester under Goneril’s gruesome response: “Pluck his eyes out!”; for aiding the King without their consent .Cornwall demands an answer from Gloucester when he states: “Where hast thou sent the King?” having received a letter warning him of France’s impending invasion. At this point of the play the audience experiences extreme of evil and cruelty with the image of the eyes being removed. These actions seem beyond injustice, relative to Lear’s banishment of Cordelia and Kent. Shakespeare highlights the extent of humanity, affecting human justice by allowing evil to grow.

The idea that justice does not prevail as it becomes a play of custom is reinforced as Cornwall says: “we may not pass upon his life without the form of justice”. Here Gloucester cannot be sentenced due to formal procedure: “form of justice”. Surely the punishment of plucking eyes out is indifferent- as according to the ‘form of justice’ Gloucester shouldn’t have been punished at all. Thus justice appears as a play of custom for such act lays within pleasure vices the powerful take. Gloucester is easily seen as a victim of unjust as he prepared to suffocate for Lear. His honest nature would not let him stand aside and watch “[Regan’s] cruel nails / Pluck out [Lear’s] poor old eyes”. This is shockingly portrayed as Cornwall suggests that their power can alter “form of justice”: “yet our power shall do a courtesy to our wrath”.

The play employs poetic justice to all evil characters in the play. Yet King Lear and Gloucester suffocated more than evildoers as consequence of their misjudgments, which can be seen as harsh justice at work. “Was this a face to be oppressed against warring winds?” laments Cordelia having rescued her father from the vicious storm and wild surviving. Edgar confronts Edmund: “The dark and vicious place where thee he got. Cost him his eyes”. This confrontation by both Cordelia and Edgar of their fathers’ fate implies that they believe it is harsh form of justice served to them. Their forgiveness, despite rejection from their fathers in the start of the play, reflects their explicit goodness.

Poetic justice is employed as Edmund is killed by Edgar; jealousy becomes fate for Regan and Goneril as she destroys both their lives. Thus Edgar’s comment about our own evil turning against us, hence justice is caused by own nature, is well reflected through their deaths. Further more death of Cornwall killed by his servant and counterbalance enhanced by Albany shifting to a trustworthy character both brings about hope for the play by sense of justice. Albany’s morality becomes evident as he objects cruelty towards Gloucester: “You justicers, that these are nether crimes”; the term ‘nether’ refers to earth and heaven. Albany’s reaction in such saying further approves flaws in human judgment causing unjust in the play. Read also dmund and Edgar essay

However it appears that human unjust isn’t the only form of unjust when Cordelia is hanged. Edmund’s realization of his evil: “Some good I mean to do, despite my own nature” does not save him from his death. This poetic justice is parallel to Albany’s comment: “All friends shall taste the wages of their virtue and all foes the cup of their deserving” where he appreciates justice served to Edmund the ‘foe’- Albany sees evil doers as his foes. Yet this idea of the virtue rewarded seems absurd in Cordelia’s death. Divine justice becomes questionable as Albany pleads: “Gods defend her” shortly before her death, yet she dies. Cordelia’s death causes immense affliction to already fragile Lear and eventually becomes his own cause of meeting death. Cordelia reassured Lear by insisting that she has “no cause” for not loving him reflects her forgiving nature. By her death she appears an altruistic character along side with Kent and Edgar.

Despite being banished, Kent had “followed his enemy King and did him service improper for a slave” as described by Edgar. His altruistic nature further reflects as he refuses to- “be better suited” when Cordelia offers him and also rejects the offer made to him by Albany to reign with him and Edgar. He responds: “I have a journey sir shortly to go; my master calls me” which is subtle. It could be interpreted that Kent feels that his old age isn’t suited for ruling and the ‘journey’ could be death and life beyond.

Strangely Lear sees a “look on her”, holding Cordelia on his arms- presumably, Lear sees her spirit been taken away to heaven; justice seem to be portrayed as other worldly. Shakespeare could be suggesting that absolute justice cannot be served on earth due to too many human flaws. Yet humans are given free will to choose and live morally, though wisdom may appear foolish as in Cordelia’s fate; her goodness doesn’t serve her justly. By Lear’s observations (of Cordelia’s resurrecting signs) we are to have hope that just will be served to ones who deserve, maybe not on earth but life after.

Social justice is pinpointed by Gloucester and Lear who seem to have realized the unjust to the poor. Gloucester complaints about the rich and lustful man who “will not see because he does not feel” the poor’s suffering. Lear calls the powerful to “feel what the wretches feel”. Both of those characters are exploring their humanity to ‘feel for others’ rather than self pity in their suffocating survival. In effect they have achieved wisdom though only in extreme suffering had they chosen to realise. Shakespeare thus shows that humans are capable of restoring human justice if they choose to think beyond themselves and particularly when they are free of vices.

Cordelia’s death can be viewed as a sacrifice to eliminate her father’s sins in biblical perspective. Assuming that Shakespeare intended her justice to be served in heaven, poetic justice to most characters portrays that the play employs some justice. However, Shakespeare seems to emphasize the effect of choices humans take over their free will. The justice served seems to agree with Edgar’s statement: “our pleasant vices make instruments to plague us” as even Gloucester, whom we see as a victim of flawed human justice, had actually committed adultery which reasons to his fate. Lear, Edmund, Cornwall, Oswald, Goneril and Regan who had committed to some form of vice have all served with ‘cup of their deserving’ referring to Albany’s comment. The play could not have absolute justice served due to too many flaws in human justice and brutality. Albany and Edgar become new agents of justice at the end of the play showing that free will can overcome darkness and restore the light.

If Justice is relative, depending on personal point of view, how can it be Justice?. (2020, Jun 02). Retrieved from https://studymoose.com/justice-relative-depending-personal-point-view-can-justice-new-essay 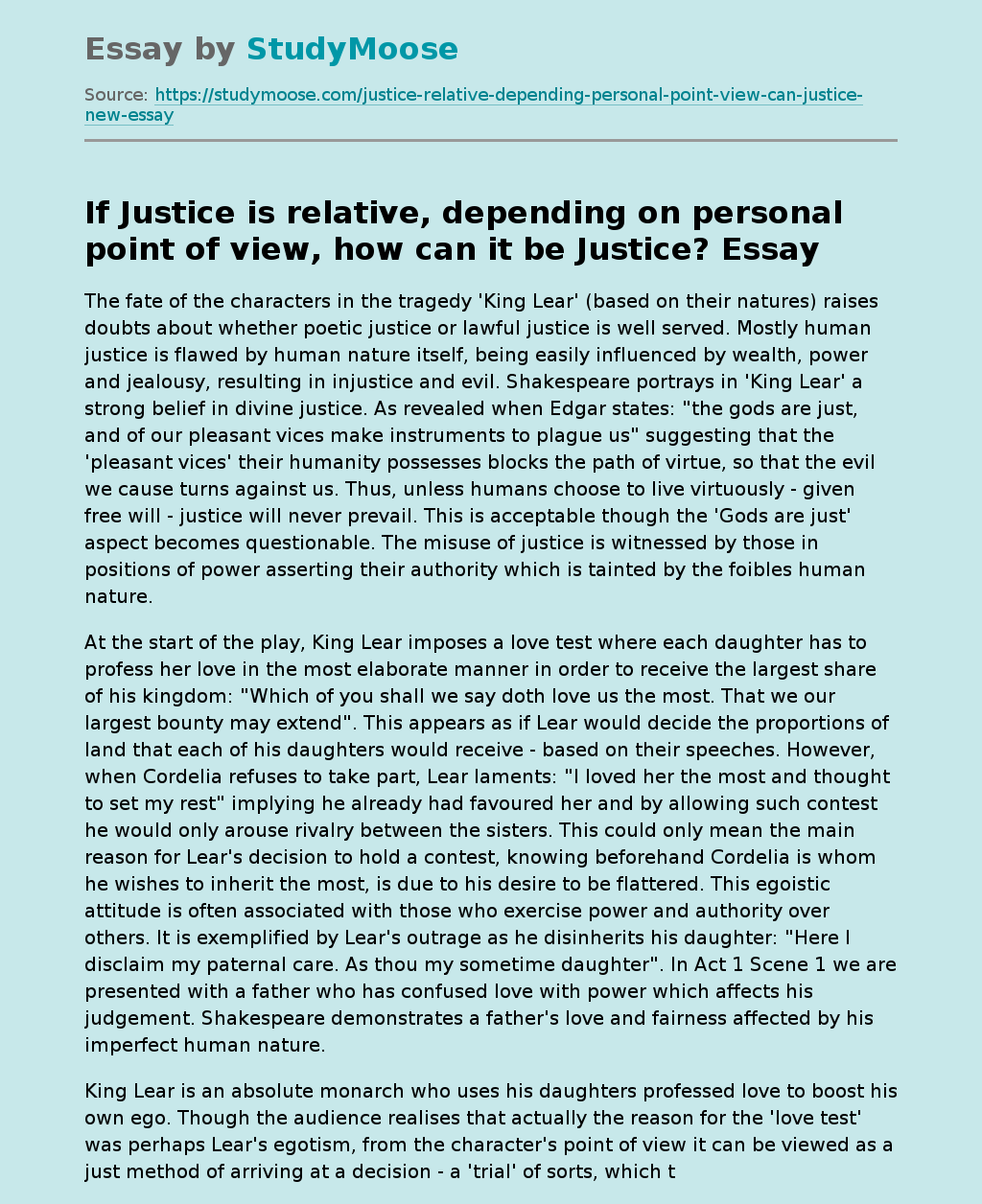