An Analysis of Hammurabi's Code of Law Essay

An eye for an eye makes the whole world blind”. This was said by Gandhi many years after the fall of the Babylonian empire. Judging by the laws of the Babylonian people, there was no insightful Mahatma Gandhi to spread his thoughts on equality and forgiveness. Though they were an advanced and organized society, the Babylonians were also extremely strict, almost cruel, when it came to law making. Revenge, faith in the gods’ sense of justice, and inequality all made up a portion of the eight foot tall stone tablet that we now know as Hammurabi’s Code of Law (Horne).

Don't use plagiarized sources.
Get Your Custom Essay on An Analysis of Hammurabi’s Code of Law Just from $13,9/Page

Hammurabi’s reign lasted from 1795 until 1750 BC (Horne). Up until Hammurabi took control, there had been no ruler to publicly establish an entire set of laws. Written in order to regulate the organization of the Babylonian society, this code, consisting of two hundred laws, begins and ends by addressing the gods. Revenge played a large role in the laws, as it was seen as the only way to truly be compensated.

Almost all of the laws lack a true explanation; they were simply accepted as fair justice by the people.

However, one law in particular does have a reason behind it. “If an accused man claims to be innocent, he will be thrown into the river. If the man drowns, he is proven to be guilty. However, if he makes it to the opposite bank safely, the accused man is indeed innocent (Hammurabi).” This law gives us an important insight into the lives of ancient Babylonian society. Obviously, the people had a strong sense of faith in their gods. By tossing the man into the raging river, the people are putting the accused man’s life into the hands of the gods. If the man was guilty and lying, the gods would see that tribute was paid to them, as well as to the village, in the form of death. However, if the accused was indeed innocent, the Babylonians would allow the man to safely leave the river, hence living. Not so unlike our court systems (with which you must swear on a bible before testifying), the Babylonian people had strong religious convictions that were reflected in their code of laws.

Another aspect reflected in Hammurabi’s Code of Laws was the belief in revenge. To the ancient Babylonians, revenge wasn’t seen as revenge: it was seen as fair and just compensation for a committed crime. To Hammurabi’s people, “an eye for an eye” was not just a say: it was a way of life. “If he break another man’s bone, his bone shall be broken (Hammurabi).” The same was true for putting out another man’s eye, knocking out someone’s teeth, and many other bodily injuries between two man (or woman) or the same class. Though these laws seem cruel and inhuman, they were meant to keep crime and violence at a minimum. Getting your arm hacked off was probably much more intimidating than a prison sentence to the people of Babylonia, hence the laws successfully fulfilled their duties the majority of the time.

Though the laws were more often than not effective, they were by no means fair. Women were dignified and treated as equals, but all social classes were not. Ancient Babylonia had a hierarchy consisting of three main social classes: the amelu, high ranking, rich court officials, patricians, and kings, the muskinu, landless and poor, though free, and the ardu, who were the lowest class (Johns). The ardu could marry and hold property, but nonetheless they were low-ranking slaves. The laws clearly reflected these social classes.

Punishments were not the same for different social classes, even if the same crime was committed. For example, if a free-born man strike the body of another free-born man or equal rank, he shall pay one gold mina. However, if a slave were to strike the body of a freed man, his ear shall be cut off. Even though the exact same crime was committed, the slave would get a harsher punishment than the free, higher-ranking man. Even in ancient Babylonia, power and money seem to have the same value as they do in the present day.

Not every aspect of the Babylonian culture was perfect. The social classes were strictly divided and people were treated as fairly as their birth allowed them to be. Vengefulness was accepted and expected, as was the belief in owning slaves. However, the Babylonians, under Hammurabi’s reign, were also a very admirable culture. Women were treated as equals: they were dignified, respected, and allowed to own land and property. The most important, positive aspect of the Babylonians was certainly Hammurabi’s Code of Law. As an unchangeable, fairly indestructible written code, it not only influenced other cultures (such as the Syro-Roman and Mahommedan) later in history, but it also gave us a first hand account of what life was like in a culture that was lost so many centuries ago.

An Analysis of Hammurabi's Code of Law. (2016, Jul 25). Retrieved from https://studymoose.com/an-analysis-of-hammurabis-code-of-law-essay 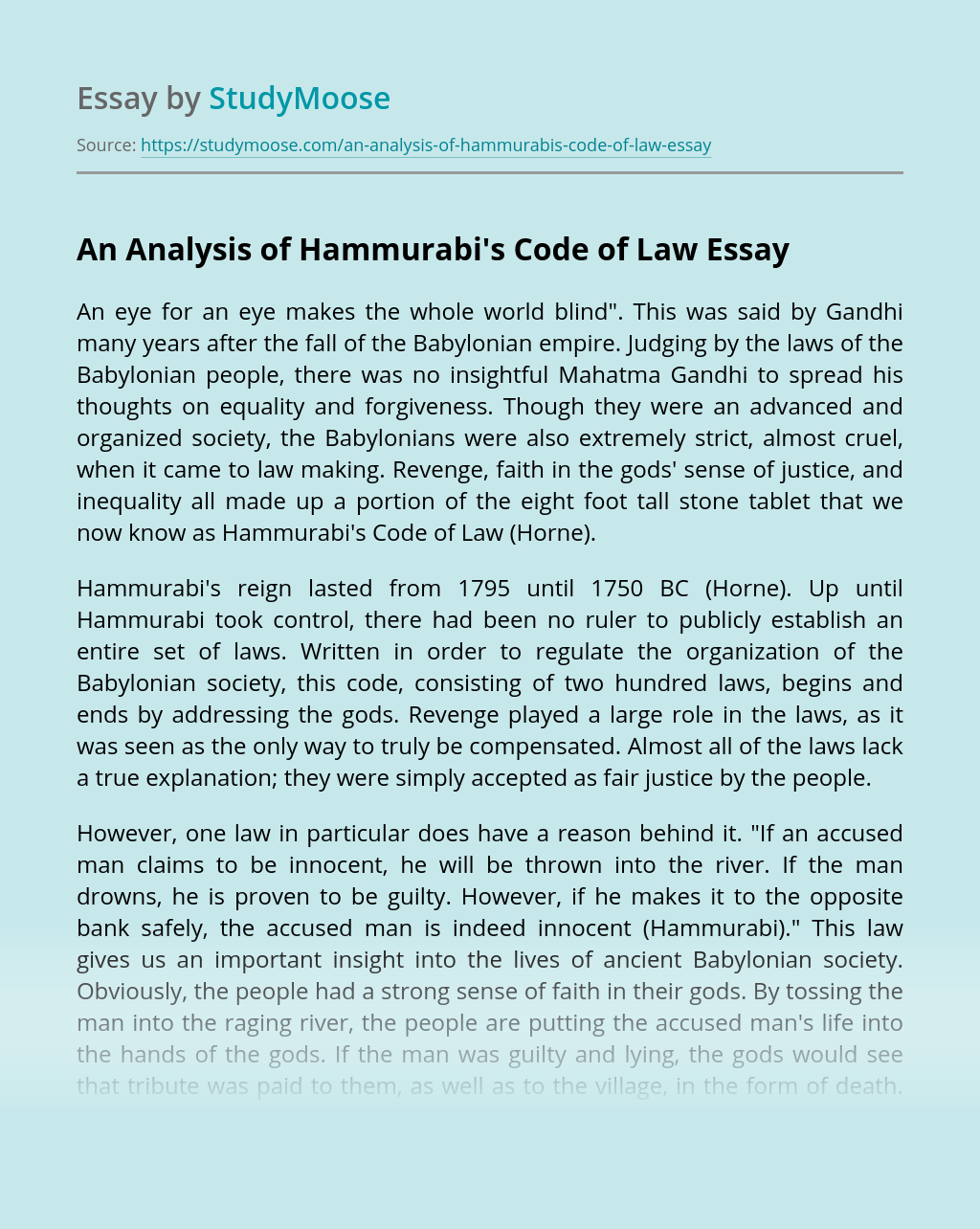 Nicotinamide mononucleotide (NMN) adenylyltransferase (NMNAT) is a class of enzymes that is a member of the nucleotidyl-adenylyltransferases, which are a family of proteins indispensable for cellular homeostasis (1). A transferase is an enzyme that transfers a chemical group, like a methyl group or a glycosyl group, from one compound (a donor) to another compound (an... VIEW ESSAY

Explain the cause and effects of cyberbullying and provide some solution to this issue.I. IntroductionWhat is Cyber bullying?Cyber bullying can be defined as the use of information and communication technologies to support deliberate, repeated, and hostile behaviour by an individual or group that is intended to harm others. Cyber bullying is mostly conducted by kids... VIEW ESSAY

Introduction A daily intake of Vitamin C is essential for humans. Without it, the disease scurvy develops as sailors, explorers and people during the long winters in the Northern hemisphere found before the time of Captain Cook. The British Navy started giving sailors lime juice to prevent scurvy on long voyages in 1795. Vitamin C... VIEW ESSAY

1. Describe how the value proposition that Middleby offers to a casual dining chain, like Outback steakhouse, might differ from one that is offered to a fast-food customer, like Papa John’s International. Don't use plagiarized sources. Get Your Custom Essay on An Analysis of Hammurabi’s Code of Law Just from $13,9/Page Get custom paper In order... VIEW ESSAY

View sample
Statutory Responsibilities and Rights of Employees and Employers

1. Know the statutory responsibilities and rights of employees and employers within own area of work. 1.1. List the aspects of employment covered by law.Minimum wage, hours working, discrimination, health and safety, holiday entitlement, redundancy and dismissal, training, disciplinary procedures, union rights and consultation. Labour covers the deal between employee and employer. Health and safety... VIEW ESSAY